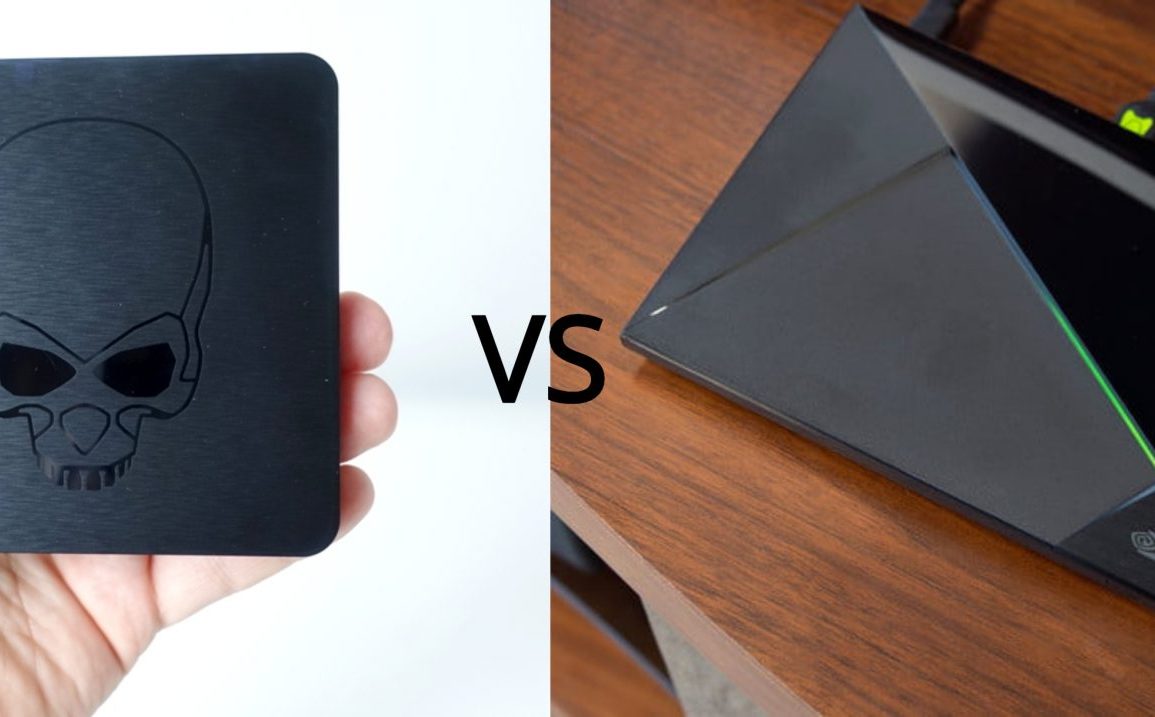 Beelink GT King vs Nvidia Shield – Nvidia Still Has It!

Starting with the design, both TV Boxes have a totally different design despite molding from plastic. Beelink GT King goes for a traditional and common square shaped flat TV Box. It’s cool to see a skull illustrated on the top with the eyes that light up green when turned on (not that bright though). On the front, there’s the IR blaster which is hidden. The port placement is similar to all Android TV Boxes, the frequently used ones are on the left, and the always-connected ones are on the back. Comparing its design to the previous Beelink models, this one is slightly better with better visuals (thanks to those green LED eyes). 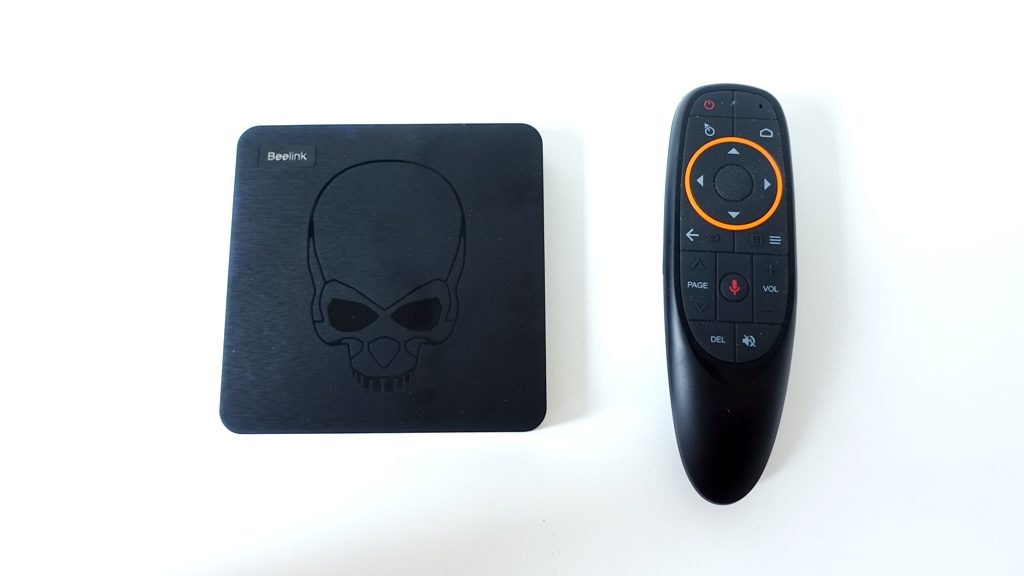 Whereas, Nvidia Shield (2017) has a design which is totally on a whole new level. The TV Box reflects a gaming personality to the TV Box with the unique angular gamer aesthetic. The green angled LED coming out of the chassis shows that the device is turned on and perfectly matches with Nvidia’s green color trademark. Moreover, unlike GT King, the accessories such as the gamepad (buy separately) and remote control also follow the angular design of the TV Box which creates an overall amazing unboxing experience. One can simply tell that this remote control and gamepad belong to this TV Box just by looking at it, which isn’t the case with Beelink GT King’s remote. Beelink GT King remote has more options added to it including the mute button. However, Shield remote control is pretty simple and basic and much easier to use. 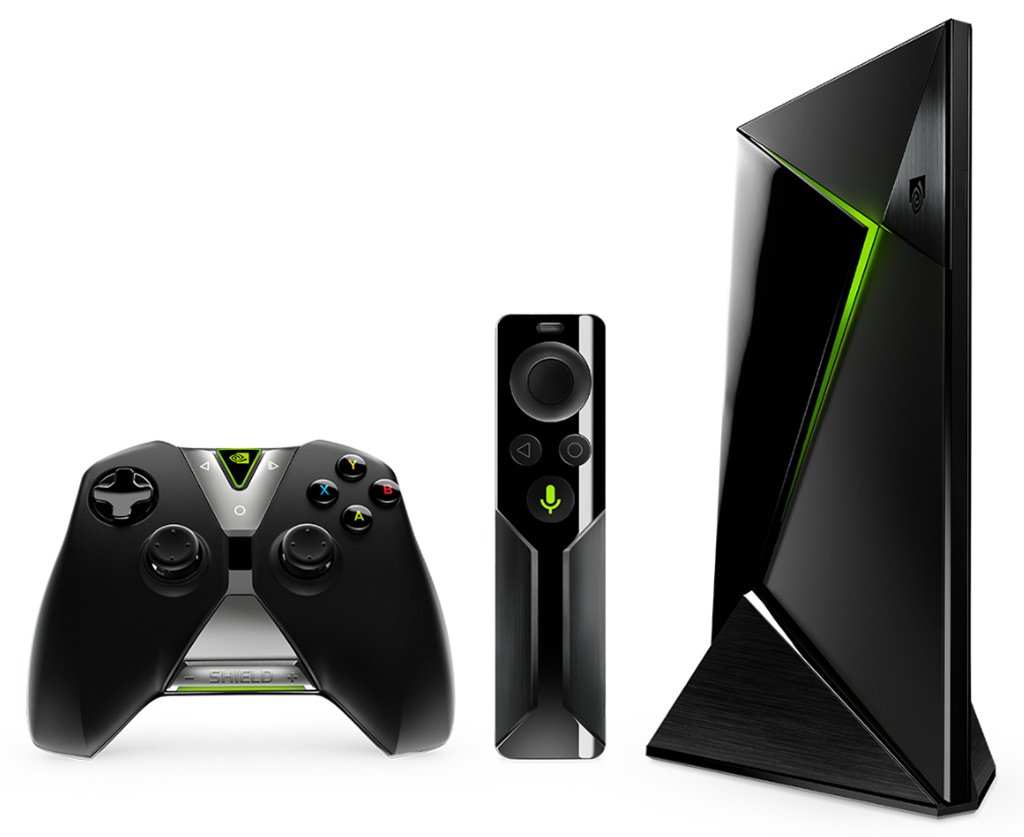 In terms of portability, the Beelink GT King occupies less space (6cm lesser in width) than the Nvidia Shield and is 0.4cm thinner as well. This is because the GT King is perfectly square while the Shield is rectangular. Since the area is much compact, one can expect the weight of King (190 grams) to be lesser than Shield (250 grams). However, remember one thing that lighter TV Box displaces when doing any cable adjustment despite having a non-slippery pad at the bottom. The King and Shield are no exception.

So, due to Nvidia’s unique elegant design matching with the accessories as well, the winner in the design section is:

I know how the internet is creating hype about GT King as the first TV Box to feature Amlogic S922x which is better than RK3399 and S905X2. However, in comparison to Sheild’s Nvidia Tegra X1 processor, S922x is still way behind. I guess we have the budget difference as well. Here’s a CPU performance to prove it:

Furthermore, the GPU is improved from the S905X2’s Mali-G31 MP2 and S905X’s Mali-450 MP5 as well as Rockchip’s GPU but has a huge performance gap from Maxwell 265-core GPU. In comparison to Nvidia Tegra 4’s Maxwell 256-core, the GPU performance is even lesser than half.

Now the good aspect is that Beelink GT King’s S99x SoC uses the 12nm process whereas, Nvidia Tegra remains at the 28nm process. Thus, King has better energy consumption and remains surprisingly cooler than Shield. However, the performance under high temperature is still incredible of Nvidia Shield despite the old process and for GT King it maintains around 92% of its performance under high load.

Apart from the process, Beelink GT King also has better memory and ROM combination. It offers 4GB DDR4 RAM + 64GB eMMC storage which is excellent for running multiple apps and storing large data as even games have more than 1GB data these days. Whereas, Nvidia Sheild features 3GB DDR4 RAM but limited storage of 16GB. The interested one can go for 500 HDD option in Shield Pro which obviously is much expensive than the regular version. Despite the low storage one can easily use secondary storage devices such as a Flash Drive (NTFS/ex-Fat supported) or external HDD.

We have divided the connectivity aspect into two sub-categories, wireless and wired. In the wireless section, both devices are almost the same using Bluetooth v4.1, Dual Band and Dual Antenna WiFi 802.11ac. Both can operate via Google voice from remote. Shield has google assistant pre-installed while for GT King you have to install one manually. Nvidia Shield also supports Amazon Echo and Google Home. However, considering the remote control, both use 2.4G IR receiver to connect. SHIELD can connect to Network Addressable Storage (NAS) including PCs

Moving to the wired connectivity, GT King has an upper hand here because of two USB 3.0 ports, 1 x HDMI 2.1 to 4K@75fps connector, another USB 2.0 at the rear, a microSD slot, Gigabit Ethernet port, power connector, AV jack and a hole with the reset that we can press to enter flash mode. Meanwhile, Shield only has HDMI 2.0, Gigabit Ethernet, two USB 3.0, no MicroSD slot and a power button. Like previously said, Beelink also has better ports placement where the most used ones are situated at the left side which is the USB 3.0 ones. Thus, Beelink not only has an extra USB 2.0 but MicroSD slot as well and is on the lead.

Let’s be honest here. Chinese TV Boxes doesn’t have that many features to offer in comparison to a global brand unless it’s Xiaomi or any other popular Chinese brand. Such is the case with Beelink and Nvidia. Though both TV Boxes provide essential features such as voice control and 4K 60 fps video support. However, Nvidia Shield advertises itself for just more than a TV Box. It’s a streamer, game console, DVR, and media server. With the ‘GeForce Now’ running for two years and increasing its list of streaming games of Android, PC, Geforce; Nvidia Shield reflects a gaming side.

For media sharing, Beelink uses the DLNA with BlubblePnP. However, Nvidia Shield uses a much popular Chromecast. Both devices support HDR10. However, sadly, Nvidia doesn’t support it on Youtube or DV on Netflix. Nvidia also misses Dolby Vision support as well. Beelink takes its advantage of releasing in 2019 with Advanced HDR10, HDR10+, HLG, PRIME HDR and profiles such as REC709/BT2020.

In short, let’s consider this section a tie since both devices have some downsides which equal each other. Let’s say that the Shield is more towards the gaming side, while Beelink solely stays as a traditional TV Box.

Despite being a 2 years old device Nvidia Shield runs on Android 8.0 with frequent updates to the UI ‘Android TV/Experience 7.1’. Since it’s only one version down, there’s no problem for the user in downloading and playing demanding apps and games. The dark-colored tiled UI of Shield reflects Nvidia experience on other devices. Almost every app is already pre-installed including Netflix, Youtube, Twitch, Prime video and more. Others can be downloaded from the Play Store. Though Android TV Boxes doesn’t have all the apps which are on phone and tablet, however with the Chromecast feature one can easily display it on the TV.

On the other side, Beelink GT King released in 2019, features the latest Android 9.0 OS. The UI of the OS is similar to the traditional ones and other Chinese TV Boxes and renders at 1080p. Of course, you can change the UI with another one, but Pixel Launcher appears to be the only one working 100% with it. There are some pre-installed apps like Google Play, Chrome, Netflix, Update, AppInstaller, AppMarket; Bee Files, Bee Music, Galery, DLNA and Settings. The greatest issue of the Chinese TV Box is the regular updates. I can’t judge whether Beelink GT King will provide regular updates as it has just released. Though, there’s a new firmware dated 05-27-2019 available now for the GT King. Let’s see for how long Beelink provides updates to this one.

Despite having different Android versions, I still find the Experience UI to be much smoother and attractive, as well as easy to use. Well, everyone has their own taste. Oh, and for the video playback, there are no image quality settings though HDMI-CEC working surprisingly in GT King. Moreover, there’s no Automatic refresh rate change even if it exists in the settings but not working.

Regarding the video playback section, the Beelink GT-King has the S922X SoC and an Advanced Video Engine Gen10 VPU compatible with most modern video formats such as h.265 and VP9. Nvidia Shield also supports these video formats despite releasing two years back.

Like previously said, Nvidia doesn’t support HR 10 on Youtube or DV on Netflix and Dolby Vision as well. However, considering streaming and video playback, it does play 4K videos at 60 fps smoothly. In comparison to Beelink GT King, there are many apps such as Youtube, Hulu, and Netflix that supports the 4K resolution on Shield. However, for GT King Youtube supports a maximum of Full-HD resolution, Netflix up to 560p. The Beelink GT-King model presents the classic configuration without certifications that limits us in quality in several streaming services, all the compatible services work without problems.

Even though both devices are targetting the high-end TV Boxes, we still have a huge price difference, thanks to China and USA. The Beelink GT King is priced $109.99 on Gearbest which is surprisingly cheap considering the new Amlogic SoC. Moreover, the manufacturer also gives a free HDMI cable as well. Whereas, Nvidia Shield considered expensive during the time of its releases, even after two years sticks to a price range of $167 to $180. You can see the performance difference, UI experience, features that define the price gap. However, from a TV Box perspective, Beelink GT King supporting 4K 60fps, Android 9.0 and new Amlogic SoC for under $110 is the winner in this category.

For a cheaper alternative under $50, you can also try T10 PRO TV Box.

Honestly speaking here, Nvidia Shield has maintained itself over the last couple of years. Despite being a two years old TV Box, Beelink GT King performance is nowhere near Nvidia Shield. Moreover, UI and OS support is also better of Shield for over two years now. However, Beelink GT King has numerous connectivity options including the SD card slot, has the latest Android 9.0, and better pricing then Nvidia Shield and most of the high-end TV Boxes.

In short, the choice depends on you. If you are more on the gaming side, features, streaming and performance, I suggest you go for Nvidia Shield. However, if you are more concerned about the budget, the best performance in Chinese TV Box,  Beelink GT King is your choice till the release of a new Rockchip TV Box.

The Beelink GT King is the Most Powerful Chinese TV Box But Not Powerful enough to Beat Nvidia Sheild. Still, perfect for the price tag and difference!

I hope this Beelink GT King vs Nvidia Shield comparison has helped. For any questions, let us know in the comments. Moreover, do rate the comparison in the review box given below.

Beelink GT King vs Nvidia Shield – Nvidia Still Has It!
Summary
In short, the choice depends on you. If you are more on the gaming side, features, streaming and performance, I suggest you go for Nvidia Shield. However, if you are more concerned about the budget, the best performance in Chinese TV Box,  Beelink GT King is your choice till the release of a new Rockchip TV Box.
Reader Rating4 Votes
8.5
Shield Over GT King
Way Better Performance
More Practical Features
Looks Better
GT King Over Shield
Much Cheaper
Latest Android 9.0 OS
Has SD Card Slot
10
Total Rating
Where to Buy Beelink GT King?
Gearbest