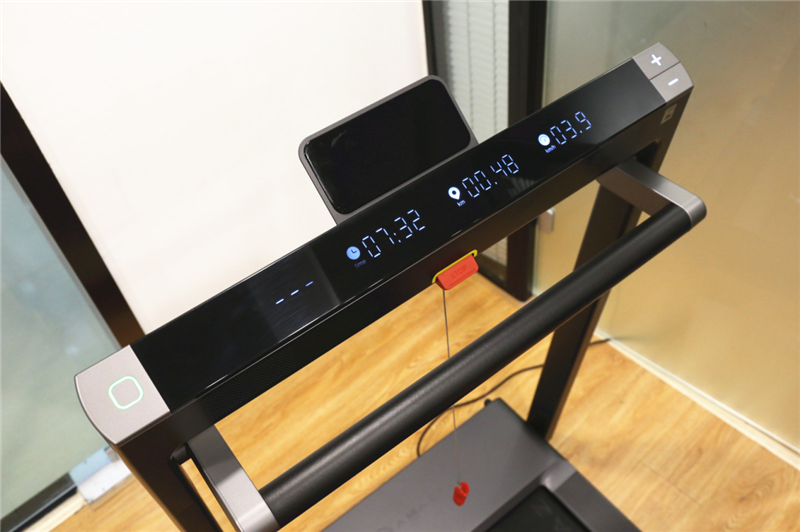 Recently, in CES 2020, Huami released a couple of products in which was the first treadmill by Huami known as Huami Amazfit AirRun categorized in super-large running treadmills, minimalist modern design, JBL customized speakers, smart wearables connection and other functions. It supports a wave-rubber column for shock absorption and noise reduction. The most convenient aspect is that it can unfold and set up in 5 seconds, so it is convenient to store. Apart from the company’s usual contribution in the wearables section, this treadmill is an unusual contribution but is still related to the brand’s health & fitness category. So, let’s review Huami Amazfit AirRun, and see if the first attempt by Huami is really worth spending 2699 Yuan ($381 USD):

Amazfit AirRun is designed to be installation-free, ready to use after unboxing, and the set up is very convenient. Huami advertises it to use within 5 seconds of unfolding. After folding, it can stand up against the wall or place in the corner, storage room, etc., so that it won’t occupy that much space and is a good option for people who have very limited room space. In comparison to Xiaomi WalkingPad Treadmill, the portability isn’t that great, since the treadmill is almost 2x the size of the trending C1 WalkingPad and 3x heavier than the C1. However, we do get much better performance out of this and the beautiful large LED display and armrest.

The bottom of the treadmill has a silicone roller which makes this 63 Kg treadmill moveable. The rollers are also rotatable so that you don’t have to lift the entire treadmill.

Also Read: Xiaomi WalkingPad A1 vs A1 Pro vs C1 – Which Is The Best Portable Treadmill? 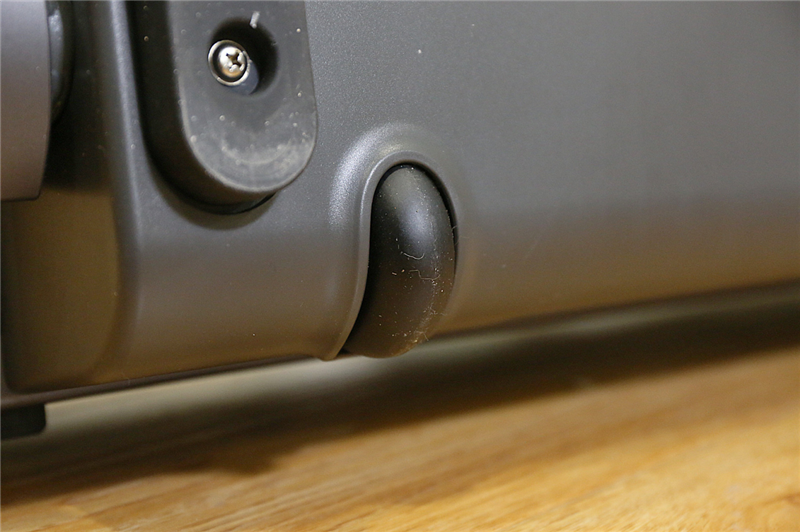 On one side, there are firm footpads. 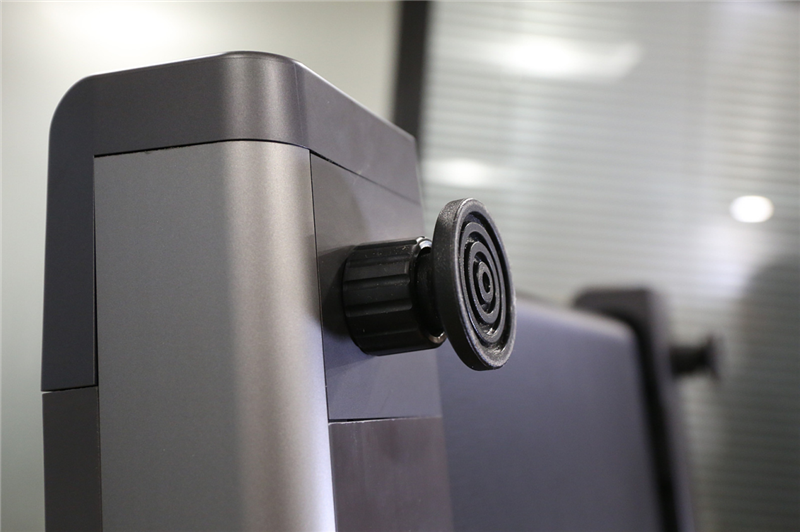 The whole body of Amazfit AirRun is coated with metallic effect paint, and almost no exposed parts can be seen on the surface of the chassis. The wide running platform looks quite smooth and can easily be integrated into various home environments. 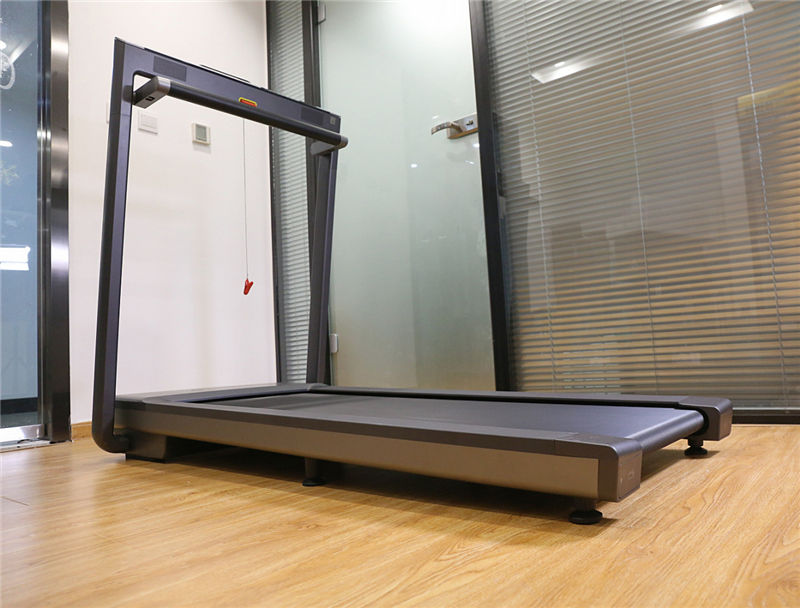 One of the highlights of the treadmill is the glorious LED display screen present at the top, much larger than the one on Xiaomi Walkingpad treadmills. One can view heart rate, time, distance, hourly speed, APP prompts and other information on the display.

Above the center of the display is a smartphone bracket. The bracket plate has a certain viscidity and a large friction force, which avoids the phone from falling while running on the treadmill. 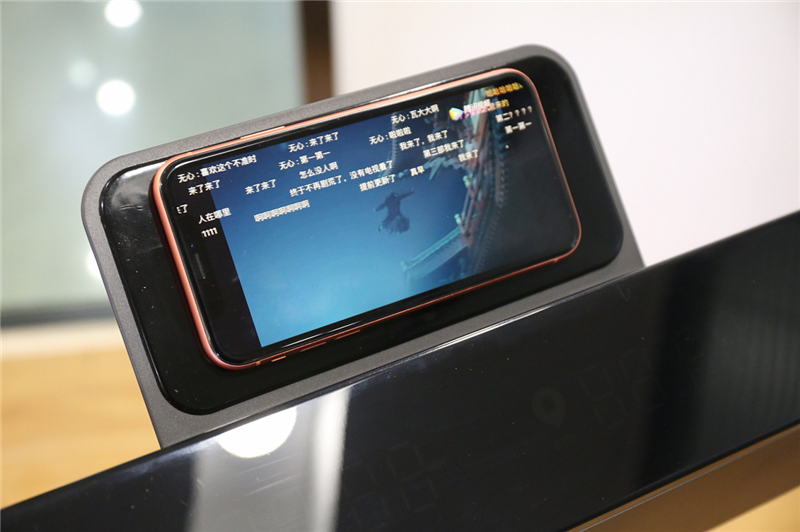 The whole interface around the screen gives this treadmill a futuristic approach. On the left is the power button with a green LED outline when turned on. Meanwhile, on the right is the rectangular speed adjustment buttons marked + and – to increase and decrease the speed respectively. Apart from its management from the buttons, one can also use the app to control the treadmill. 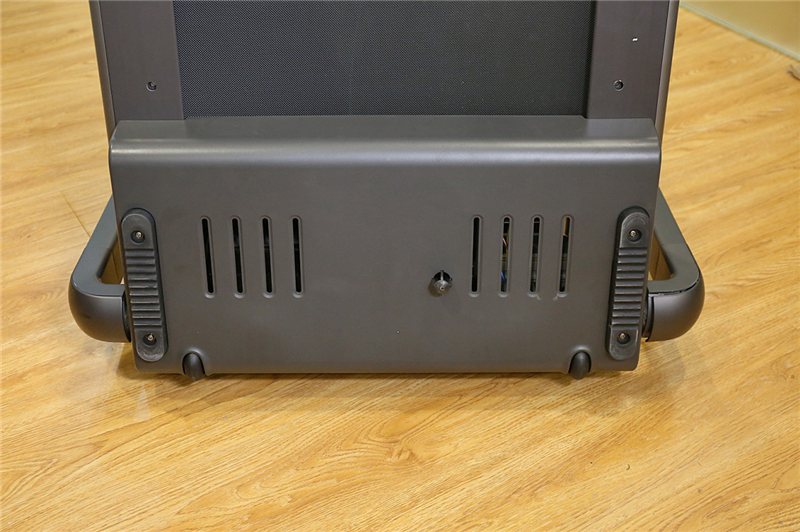 At the back, we have the power cord and power button. 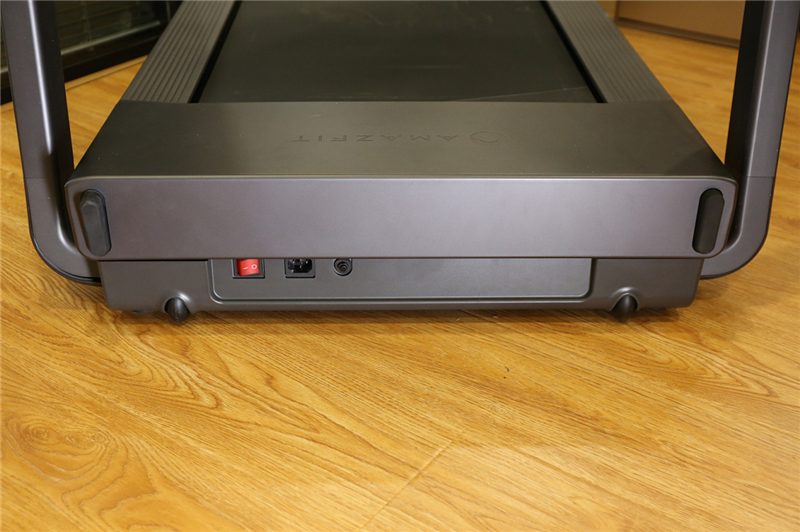 The oil pot and maintenance tools are built into the rear corners protected with a cover.

As I said that you can control the Huami Amazfit AirRun without the use of a smartphone. However, you can also control it via Huami’s wearables App which is called ‘Amazfit APP‘ and is available on both Android and iOS devices and supports multi-languages. 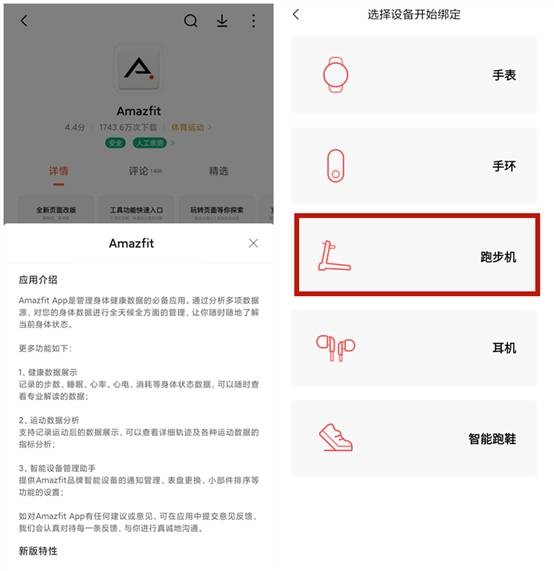 So the people who are already using Huawei Amazfit health wearables already are familiar with this app. Moreover, apart from controlling the AirRun via App, the app also enables interaction between the smartwatch and the treadmill. 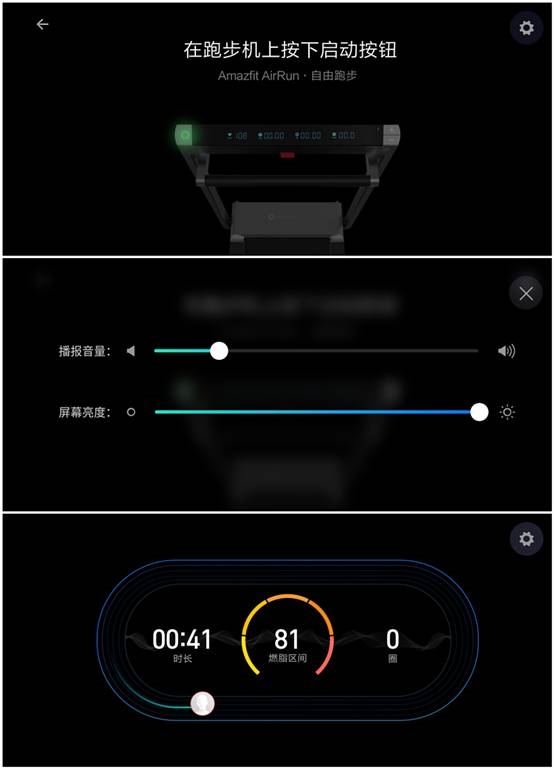 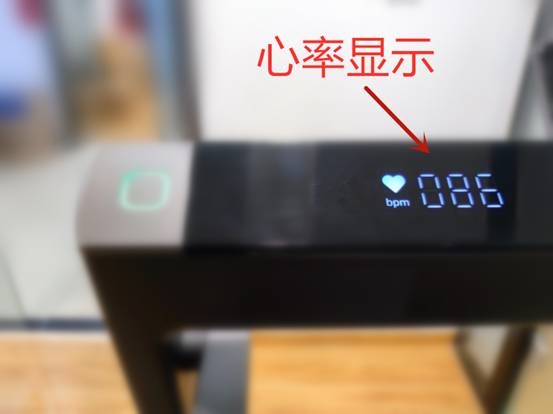 How to Show Heart Rate On The LED Display of Huami Amzfit AirRun?

Before starting a run, first, open the Amazfit APP to ensure that the watch/bracelet and treadmill are connected, and then start “indoor running” in the APP to use the wearable to record heart rate and display heart rate data on the treadmill in real-time.

How The Speakers Are Connected?

It is worth mentioning that Amazfit AirRun has two built-in JBL custom full-range speakers. They have an excellent loud, high bass sound, perfect dynamic response, and ultra-low distortion so that the user won’t need to use headphones. 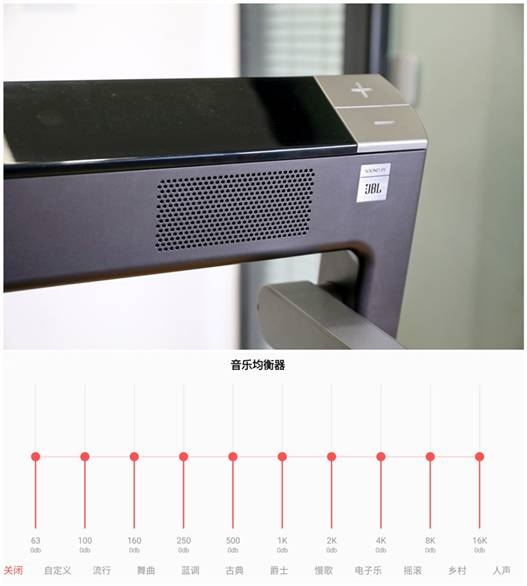 The speakers of the treadmill have an independent Bluetooth module and can be paired with the smartphone’s Bluetooth module. Both the app/watch interaction and speakers can be run simultaneously.

Mostly, when some treadmills on the market are promoted by the width of their running belts, they also include the edge to confuse the audience. The Amazfit AirRun that we reviewed and experienced honestly emphasized that its pure running belt width is 500mm excluding the edges. This specification is almost close to the level of a commercial treadmill. Be aware that many treadmills running belts on the market are still around 400mm wide. 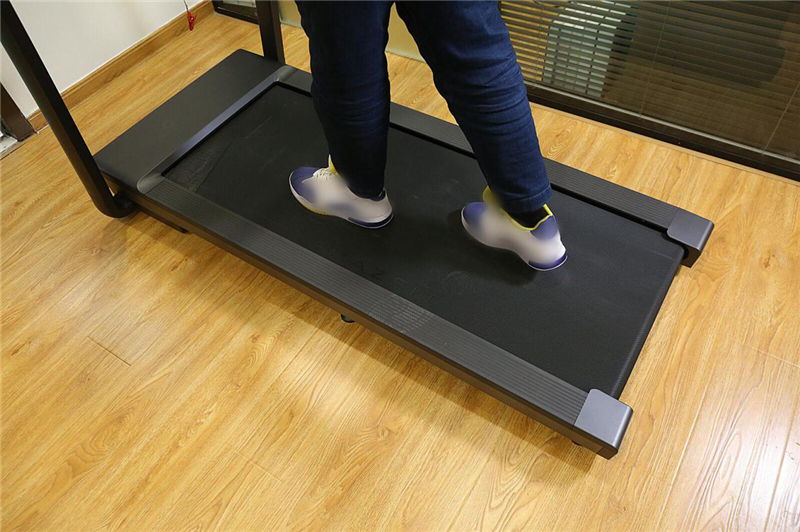 The length of the running belt is 1300mm. At the same time, the supporting sunken motor design reduces the space occupation, makes the effective running range wider, and simulates the feeling of outdoor running.

It is worth mentioning that Amazfit AirRun uses a non-slip and wear-resistant diamond-patterned running belt to increase friction, and there are anti-skid edges on both sides to ensure the safety and comfort of the running process. 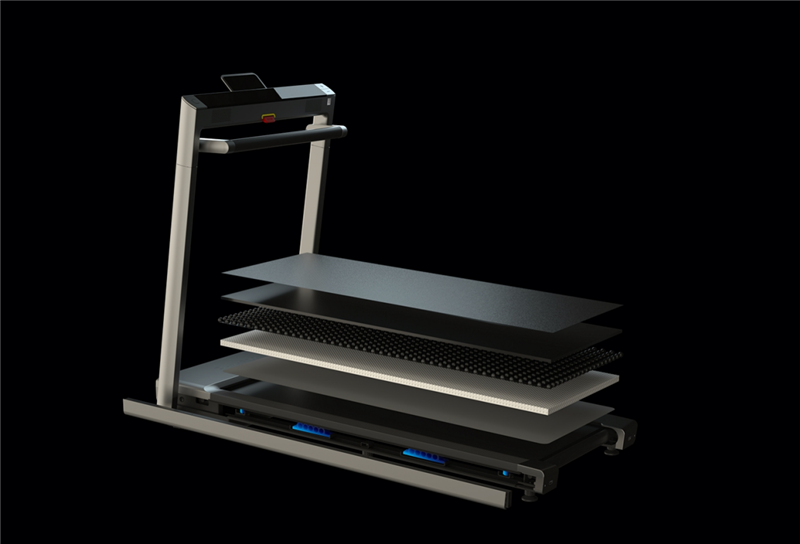 A total of 8 shock absorbers are installed between the Amazfit AirRun running board and the mainframe. When running at full speed I haven’t felt any obvious recoil and secondary recoil. 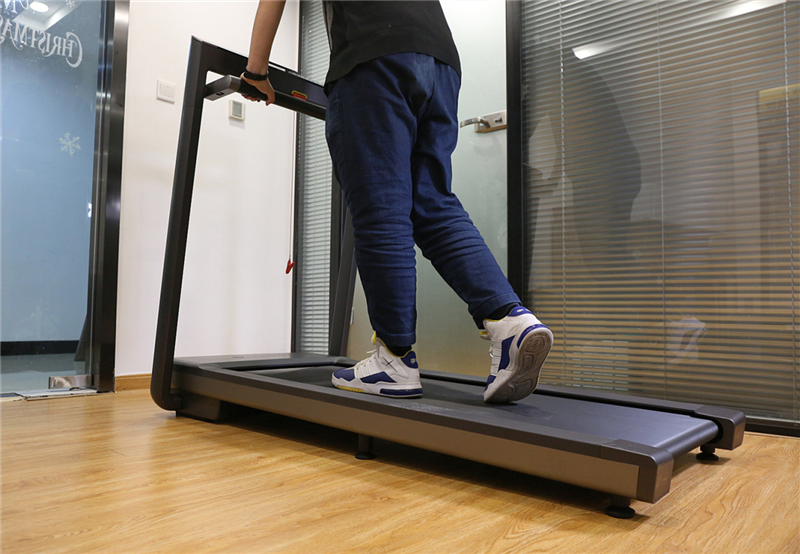 This is because the impact force is released one by one after passing through the 8 shock absorbers, landing all the way smoothly, and the running board hardness is just right. This can not only make the machine run smoothly, maintain stable running feedback but also slow rebound can protect the knee from damage.

Most of the people who go to the gym and do cardio, ignore the most important aspect of a home designed treadmill which is the noise. Since the gym is a noisy place, while a home is a quiet place, the noise generated by a treadmill matter. Since the motors and the belt have a smooth running as long as you oil properly and timely, they don’t have any loud noise. The noise generated while running is the major problem for most treadmills. This is where the 8 shock absorbers of the AirRun play their role in noise reduction. Though the armrest area shakes a little bit while running and holding it, however, the main body remains steady.

Thanks to the wide diamond-shaped rubber belt and 8 shock absorbers, the running experience on this treadmill is way ahead of any Xiaomi WalkingPad treadmills and close to a commercial treadmill but with better stability and low noise.

Like I previously said, Amazfit AirRun uses a minimalist three-key control. These three buttons have everything under control. Let’s talk about the functions of each button: 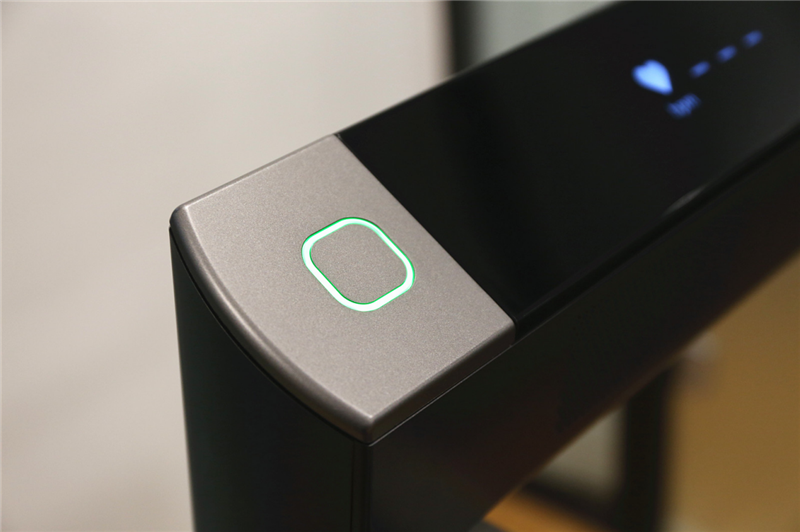 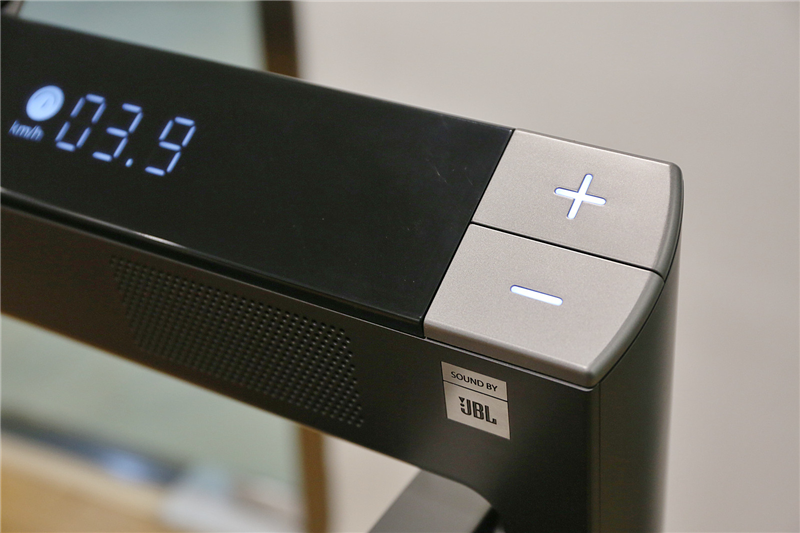 Last but not least is the – button:

Like most professional treadmills, the AirRun comes with an emergency stop feature. Below the LED screen, one can see the red colored ‘Stop’ button.

In terms of storage, Amazfit AirRun is quite beautiful. Officials say it supports true full folding, saving about 80% of space in 5 seconds. Specifically, Amazfit AirRun adopts the linkage design of armrests and buttons. No tools are needed to set it up. The switch device after pulling the armrests folds down. It takes only 5 seconds to complete the folding of the machine with bare hands. It can be placed under the bed, table. It’s just like a yoga mat, it is spread out when in use and folded when not in use.

Though this is the first attempt by Huami in the treadmill line-up, yet, the AirRun doesn’t appear to be like one. It’s brilliantly designed where the greatest highlight is its foldable design which saves 80% of the space when folded within 5 seconds. Compared with the WalkingPad series by Xiaomi, this treadmill is on a whole new level thanks to the 1300mm × 500mm super-large running belt with a diamond-patterned and soft rubber edge which is anti-skid and wear-resistant, and the sunken motor design which gives the feeling of outdoor running experience. It’s much powerful than the WalkingPad series and has an armrest and a gorgeous LED display with three rectangular streamline keys surrounding it. 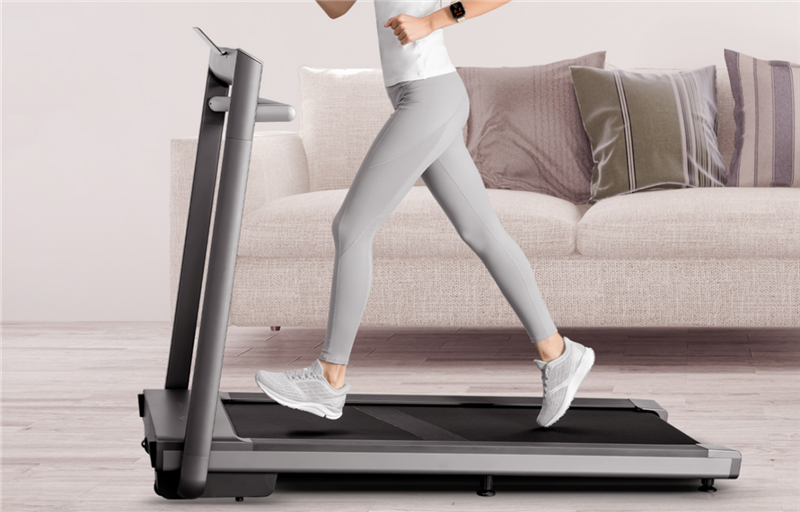 The minimalist modern design with metallic color suits most environments.  JBL custom speaker enables audio on this treadmill via Bluetooth. Huami Amazfit app allows linkage between Huami and Xiaomi smart wearables and the treadmill itself. We don’t know what else you need in a portable treadmill under $400.

It is worth noting that in terms of safety, Amazfit AirRun is again better than most commercial treadmills, especially under the $400 price tag. The stop button rope and the quick stop button ensures the basic safety, and the 8 shock absorbers eliminate the impact when falling, protects from knee damage, and also reduces the noise while running.

Also Read: Xiaomi WalkingPad A1 vs R1 vs C1 – Which is The Best Portable Treadmill?

So, yes! As a personal treadmill that occupies the least space while giving the best performance, easiest setup and wide running experience, Huami Amazfit AirRun is what we recommend. If you are slightly low on budget or want a much portable treadmill without armrest and LED display, then the Xiaomi WalkingPad A1, C1, and A1 Pro are recommended.

In China, Amazfit AirRun has been officially launched for sale on March 31, with a starting price of 2699 yuan ($381 USD). Meanwhile, global availability is still in question. We will inform you here once the treadmill is available for global purchases. We expect the price to be around $460 to $580 for international purchases. So stay tuned and bookmark this Huami Amazfit AirRun review! Any question? Let us know in the comments.

Note: This review article is the translation of a Chinese article, the image credits are given to My Driver (Chinese).