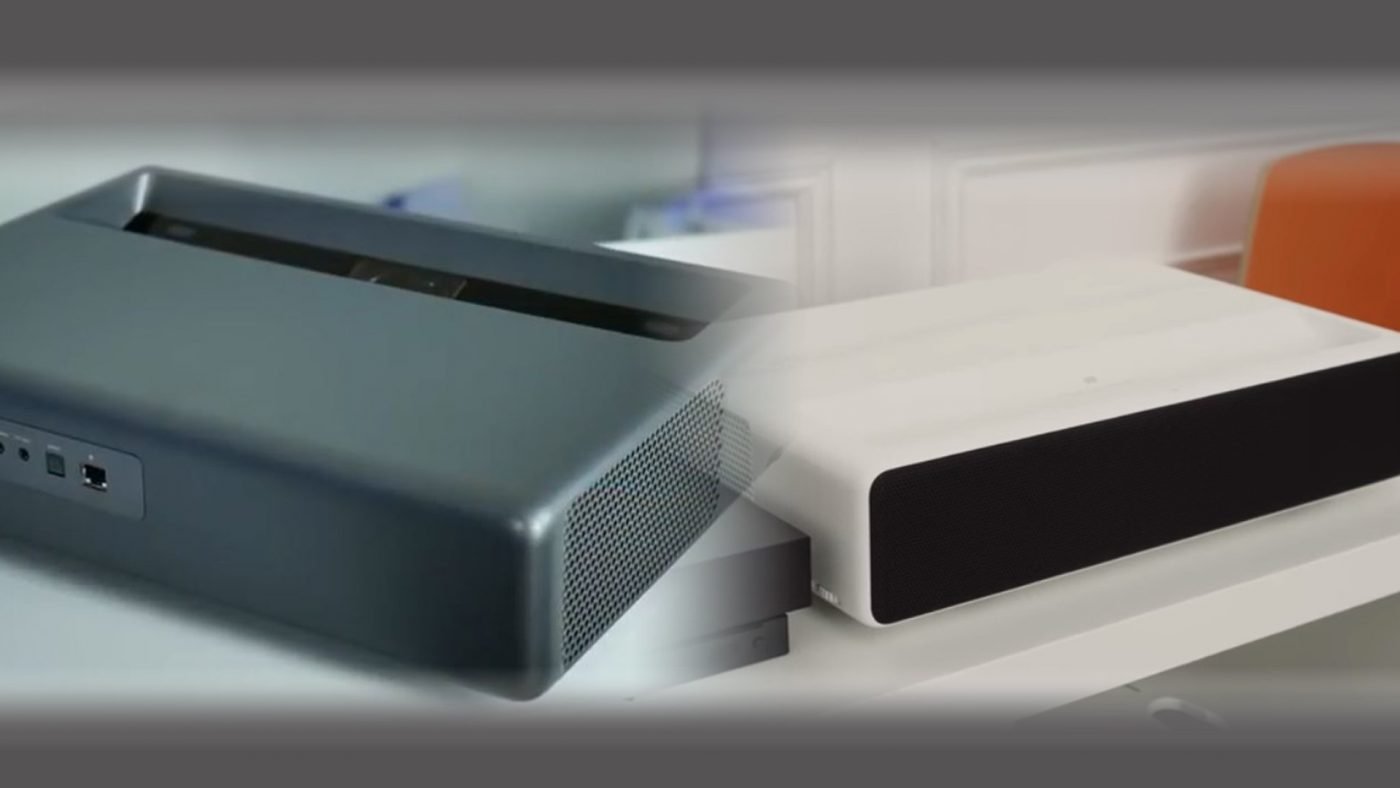 The competition in the world of projectors, although you do not believe it, exists, and it is very intense. Its market is very varied, and considering that almost all offer similar characteristics, companies have to try to innovate with each new product to avoid being forgotten. Even Xiaomi participates in it, and with products that surprise us with their prices. Recently, and emulating the steps of one of the best Xiaomi’s gadget, another projector came out which is, at least, worth reviewing, since it is a Xiaomi’s sub-brand. Join us in this Wemax One Pro Vs Xiaomi Mi Laser Projector and discover if we are facing powerful adversaries in the future.

We start this Wemax One Pro Vs Xiaomi Mi Laser Projector comparison with the most outstanding between models: its design.

The Wemax One Pro has dimensions of 44.00 x 29.00 x 9.00cm, and a weight of 6.85kg. Its finish is matt black and slightly shiny, with rounded edges that make it an aesthetically pleasing product. The connections are on the back, while on the sides we only get some grilles that help in the ventilation and audio of the product. The front part is all plastic mesh, also to dissipate the heat.

For its part, the Xiaomi Mi Laser Projector maintains the minimalist aesthetic to which the brand has accustomed us. It has dimensions of 41.00 x 29.10 x 8.80cm, and a weight of 7kg, so the difference is hardly noticeable among these projectors. What is different is the white finish. However, in terms of design, they are practically similar, apart from a color change. Although it should be noted that the Xiaomi came before the market, and having them side by side, this looks smaller than that of Wemax.

Similarly, both are ultra-short shot, so they do not require large distances to project huge images. That’s why it seemed like they lack the big lens.

Another important similarity as we can see in this comparison is that both projection systems work with MIUI TV based on Android. The Xiaomi software performs very well in both terminals, but, unbelievably, there are a couple of important differences.

For example, the Wemax One Pro has the option to change the language to English natively, while the Xiaomi Mi Laser Projector requires an APK for this. Of course, this is not a very important problem, but it is a fact to consider if we acquire the first generation of the Xiaomi device.

The Mi Laser Projector (China version) has only Chinese language, need to install apk for English. However, global version of projector is in English but is more expensive

The design of the interface is simple. We have multiple content stores, among which the multimedia or applications are divided. It also has options to pair with other Mijia devices.

Another similar aspect that we can see in this Wemax One Pro Vs Xiaomi Mi Laser Projector comparison is the fact that both controls are identical. The same case occurs as with the design section, where the only noticeable difference is that of the color, because, in the rest, they are a mutual copy (although Wemax indicates that the color of the control is also available in white, but you cannot choose it, and instead, one will arrive at random with the package). 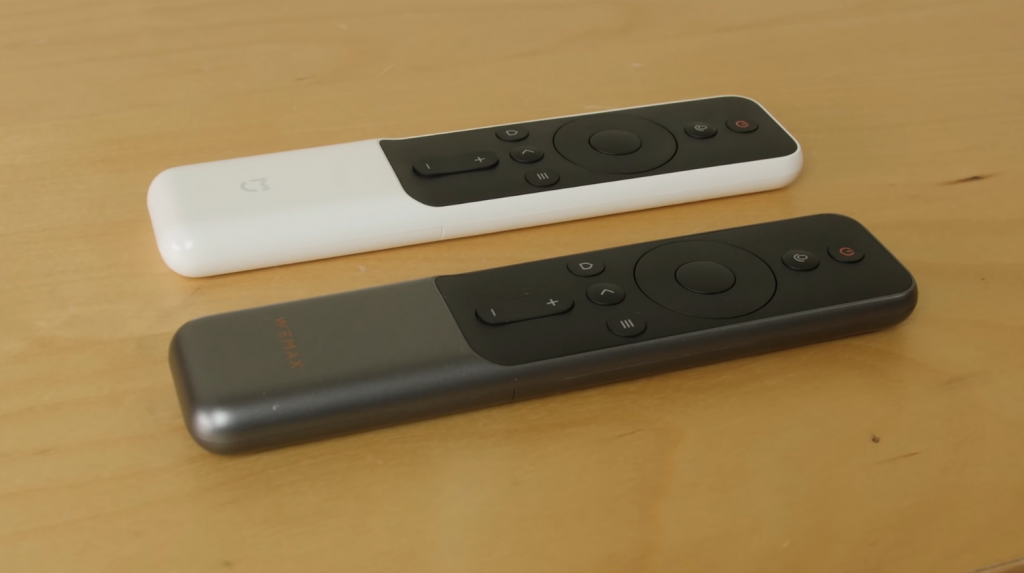 They have a simple crosshead, options to go back, a menu key, increase or decrease the volume of the speakers, and even control by voice some functions.

This section is somewhat complicated to quantify because the Xiaomi projector has multiple generations that have been modified over time. To give you an idea, we can get on the market versions whose hardware is made up of a T962X quad-core CPU at speeds of 1.5GHz, as we can also find others with the T968 quad-core at 1.8GHz. Regardless of the case, the power difference is very slight, especially since they all have the same 2GB of RAM and 16GB of ROM.

For its part, the Wemax One Pro resembles the most modern versions of the Xiaomi projector, with the same T968 processor, the same 2GB of RAM and the same internal storage capacity.

Other important data to highlight about the hardware in this Wemax One Pro Vs Xiaomi Mi Laser Projector is that both have a Full HD projection resolution (1,920 x 1,080p) with 4K support, an ALPD 3.0 light source, a projection distance of between 80 to 150 inches, and a central contrast of between 2,500: 1 to 3,500: 1. The only difference at the lens level is that the Wemax One Pro has 7,000 lumens of brightness, while the Xiaomi Mi Laser Projector has remained at 5,000.

At the level of connections and image options, both devices have both horizontal and vertical trapezoidal correction, support for 3D images, wireless compatibility via Bluetooth 4.0, and Wi-Fi dual-band networks. In the wired area, nothing is missing, with Ethernet, HDMI, ARC, USB 2.0 and 3.0, AV and SPDIF ports.

The audio in both terminals is exceptional, and although it was expected of expensive equipment, we are not used to this from the projectors. They have two tweeters for high-frequency sounds and two full speakers for all frequencies.

It’s the moment of truth in this Wemax One Pro Vs Xiaomi Mi Laser Projector comparison. Projection quality is the most important when purchasing one of these gadgets, and usually, the best-known brands tend to be a safe option. However, and as will be seen in the following images, Wemax is placed forward in what is seen as an improved option of what Xiaomi offers. 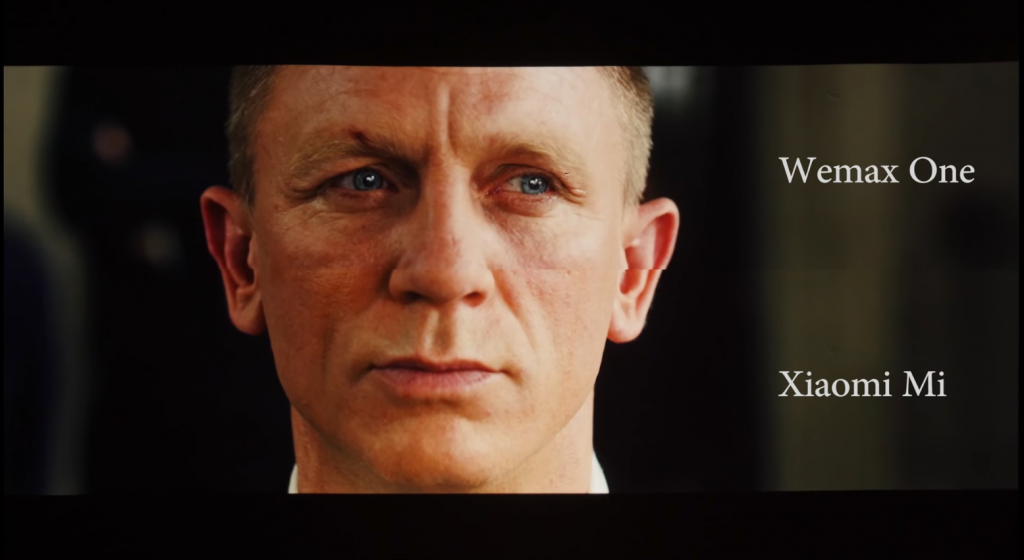 The best exposure of dark colors in the Wemax One Pro allows it to create a sharper image, with more natural and different elements on the screen. Both have HDR, and although in the case of the Xiaomi projector which sometimes oversaturated the clear scenes, in general, they have very good results.

However, the clear winner of this section, although just for very little, is the Wemax One Pro. The image gains much more detail with natural blacks than with more vivid whites.

Another aspect that was tested was the latency in both projectors for games. In this case, there is virtually no difference between them, with very good results that will satisfy the vast majority of gamers, although they may not be the best products if we look for a latency close to zero.

This aspect is interesting since we can see how, despite the slight differences present in the reproduction of light and dark, the image quality is not so altered in the final result.

Xiaomi, as if it were an allegory to the color of its projector, has a device that reproduces much better the white tones, especially the grayer ones. However, there is no way to change this in any of the devices, since they do not have gamma editing options, so clearly (pun intended), the winner in clarity is the Xiaomi Mi Laser Projector.

In contrast, when it comes to the darkest tones, the Wemax One Pro is definitely the winner. Although in the images on the internet the difference is not so noticeable, when we have it in reality, it is obvious that Wemax achieves a more natural reproduction of black, while the Xiaomi projector has a slight dye. 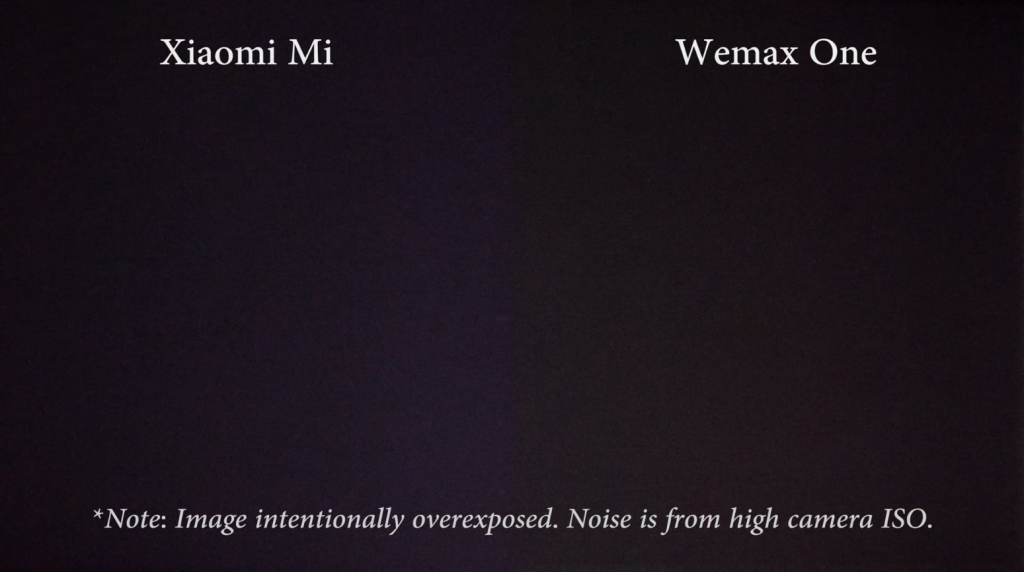 These projectors require almost no maintenance; hence their design is different from other similar products. The quality of the image will not degrade over time either, so we can be sure that both are a perfect option if we want durable products. If you are in search of a projector with a native 4K resolution you can also check Xiaomi Mijia 4K Laser Projector and Fengmi 4K Cinema Laser Projector.

We finish this comparison with the most important from the point of view of the consumer: the price.

Xiaomi has us accustomed to cheap devices, so it is somewhat disconcerting to see a terminal of them that reaches almost $2,000. However, we are facing a projector of the highest quality, and it is logical that it is so expensive. Anyway, it is still possible to get it between offers at prices of $1,700.

The Wemax One Pro, on the other hand, is set securely in the $1800 – 1900 tag (sometimes even reaches $2000), but, as we saw in the comparison, the image quality is a bit better in this. Although those $100-$200 may not be worth it for the majority of users, if we are looking for a projector that achieves the best possible image quality at present, then Wemax is your choice.

You can grab these projectors from here: