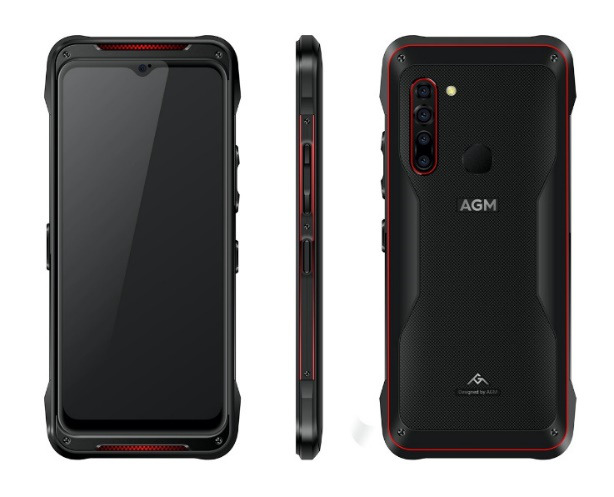 AGM is a well-known rugged smartphone brand in China. After the release of AGM X4 and M5, the company releases the world’s first 5G rugged phone which is AGM X5. It will be available for pre-orders in China from 10:08 (Beijing Time) on December 1.

AGM X5 continues to inherit the same design from the previous models which is the tough shape or ruggedness, but the back and waist are concave on both sides, and the thickness is slightly reduced. This might be the thinnest rugged phone we have ever seen. On the front, we have a 6.53-inch FHD+ LCD screen.

The phone is waterproof and dustproof and the IP certification reaches IP69K, which can support the waterproof performance of diving to 10 meters. Moreover, it is rumored that the anti-fall height has been increased from 1.5 meters for traditional phone manufacturers to  “no damage when falling from the second floor.”

The AGM X5 features a waterdrop screen and a rear fingerprint reader. It also has quad rear cameras. In terms of cameras, the AGM X5 has a rear 48MP primary camera + 8MP ultra-wide-angle + 1MP depth-of-field camera and 1MP macro lens in a quad-camera configuration.

Now the interesting part, this phone features a 5G SoC made by Chinese SoC manufacturer ‘UniSoC’. The processor is the Unisoc T7510 which is also used in Hisense F50 5G smartphone. It consists of 4 x 2.0GHz Cortex A75 high-performance cores and 4 x 1.8GHz Cortex A55 power-efficient cores. The GPU uses PowerVR GM9446 with a frequency of 800MHz. It integrates the Ivy V510 baseband, supports SA&NSA 5G dual-module network, and N41/ 5G mainstream frequency bands such as N78/N79.

AGM X5 is now available in China for a price of 3699 yuan ($566 USD) on JingDong. We will inform you once it’s available for global purchase.