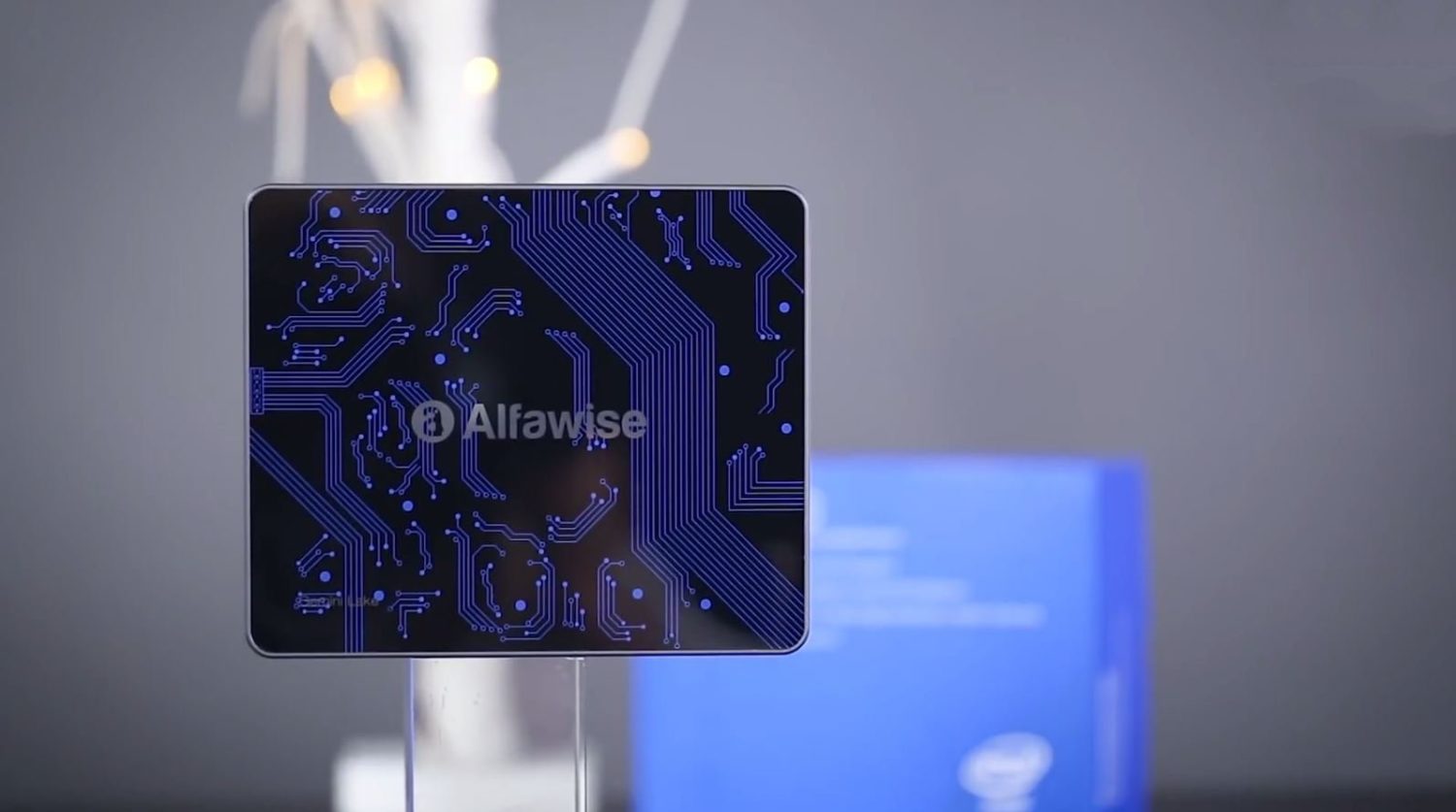 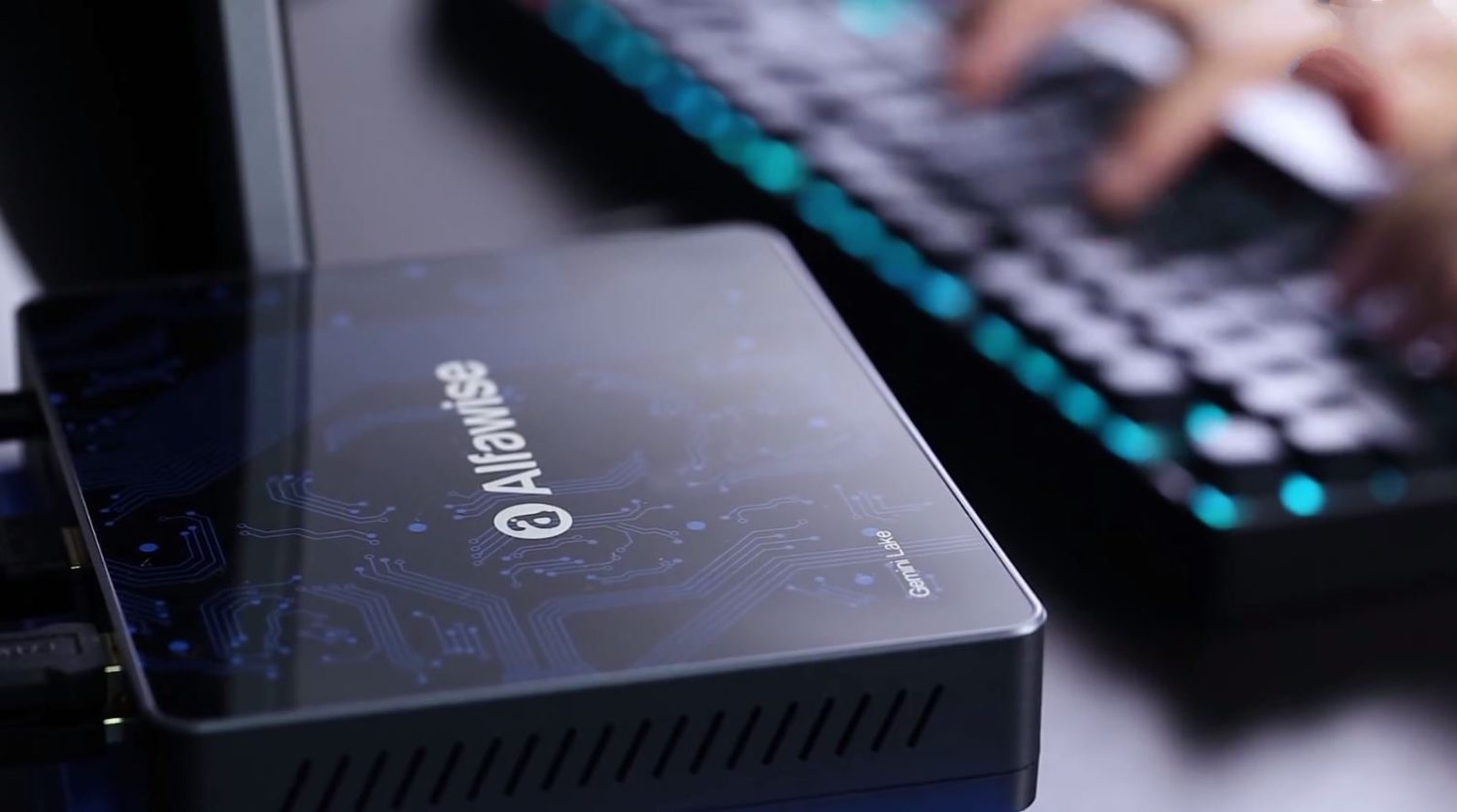 Why Should We Move From Apollo Lake To Gemini Lake?

Well, looks like you probably don’t want a frequency (max) upgrade from 2.2GHz to 2.4GHz. Moreover, you also don’t want the improved L2 cache to 4MB and even faster memory support of DDR4 2400MHz. You can stick to the Apollo Lake. But believe us, the prices of the Apollo Lake Mini PCs are almost the same as of Intel Gemini Lake (Celeron N4100) and even there are some Chinese Apollo Lake Mini PCs which are way expensive than the current Gemini Lake ones. So, still, you consider sticking with Intel Celeron 3450? Good, let’s move to the latest Mini PC with a good SoC which has a better price. In short, we can say that:

First of all, what makes a Mini PC sell? Well, obviously, the answer is in the name itself which is it’s Mini/Compact design. It’s perfect when it comes to space management and portability. Alfawise T1 is no exception. The mini PC hardly occupies a space of 16.00 x 13.45 x 3.20 cm and weighs 407 grams. Practically speaking, it can easily rest inside your bag, however, you will need to upsize your pant’s pocket if you want to carry it in your pants. As it’s 407 grams you will obviously feel the weight, 3x more than your standard smartphone. 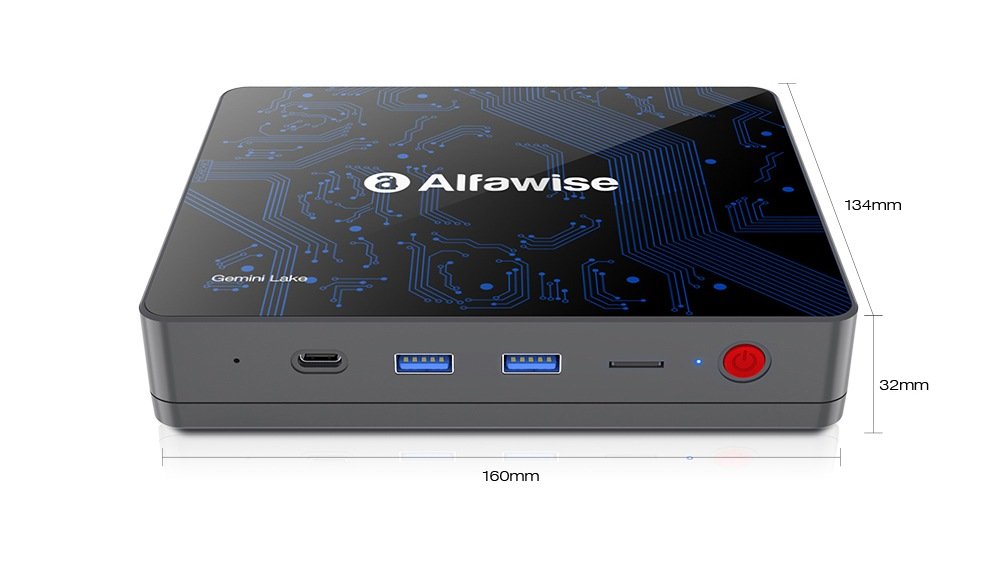 If you have been a Mini PC enthusiast, you might have noticed that the Alfawise T1 Mini PC particularly resembles Beelink S1 Mini PC (Intel Apollo Lake Mini PC). In fact, the ports placement, the dimensions, the buttons, and even the expansion options are almost the same. The changes we witness are only the logo, top cover, and the color tone. We don’t know if this is a coincidence or they bought the chassis from the same manufacturer. Anyways, moving back to the point, we loved the new motherboard/chip traces design cover on the top. The sides are curvy and the finishing is great. 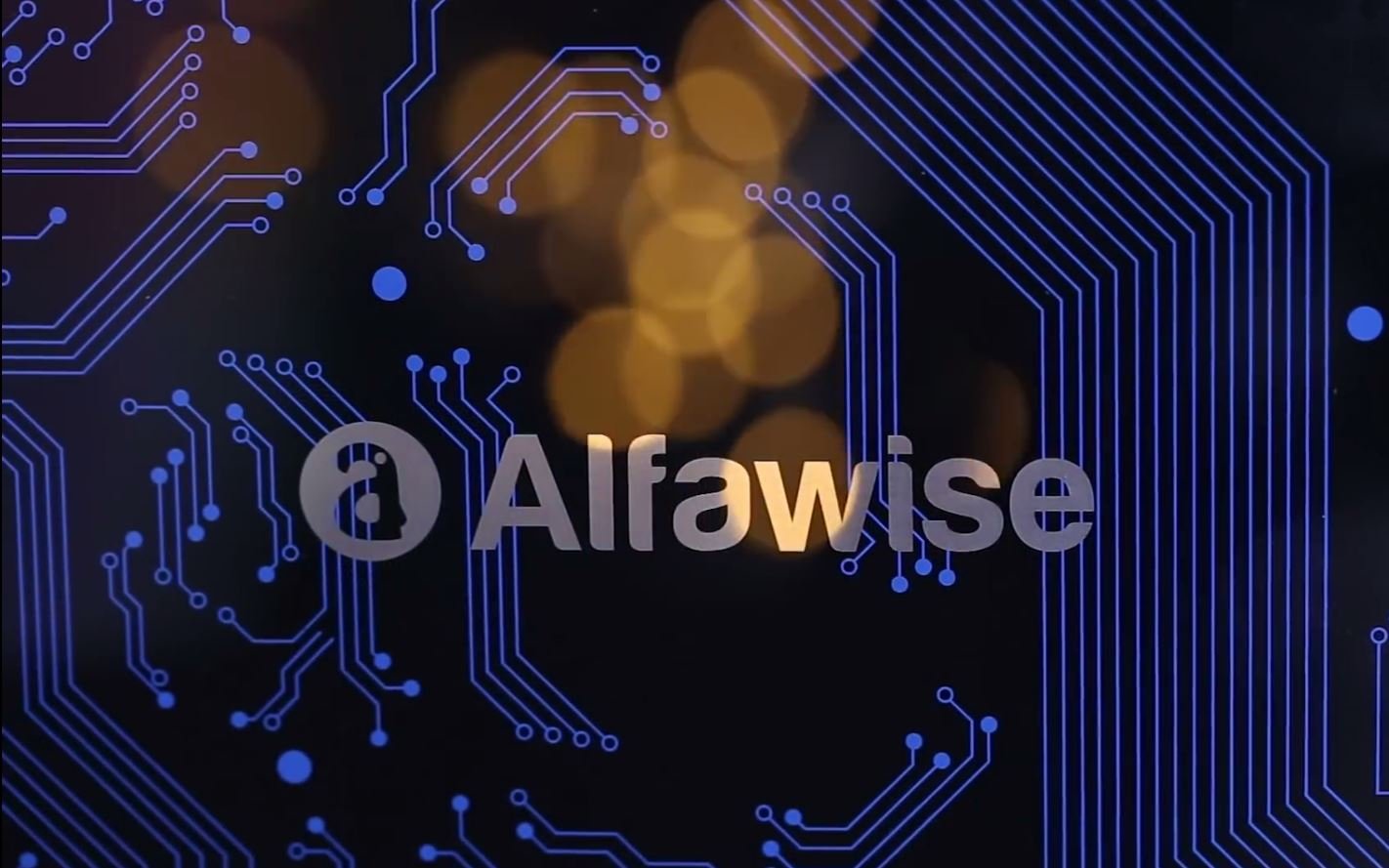 Though, the Mini PC molds from plastic but we never feel that way thanks to the dark gray matte color, top cover, and finishing. Furthermore, it’s a fanless Mini PC, so it has no noise at all and since the Gemini Lake is highly energy-efficient, the heat dissipation is normally low. 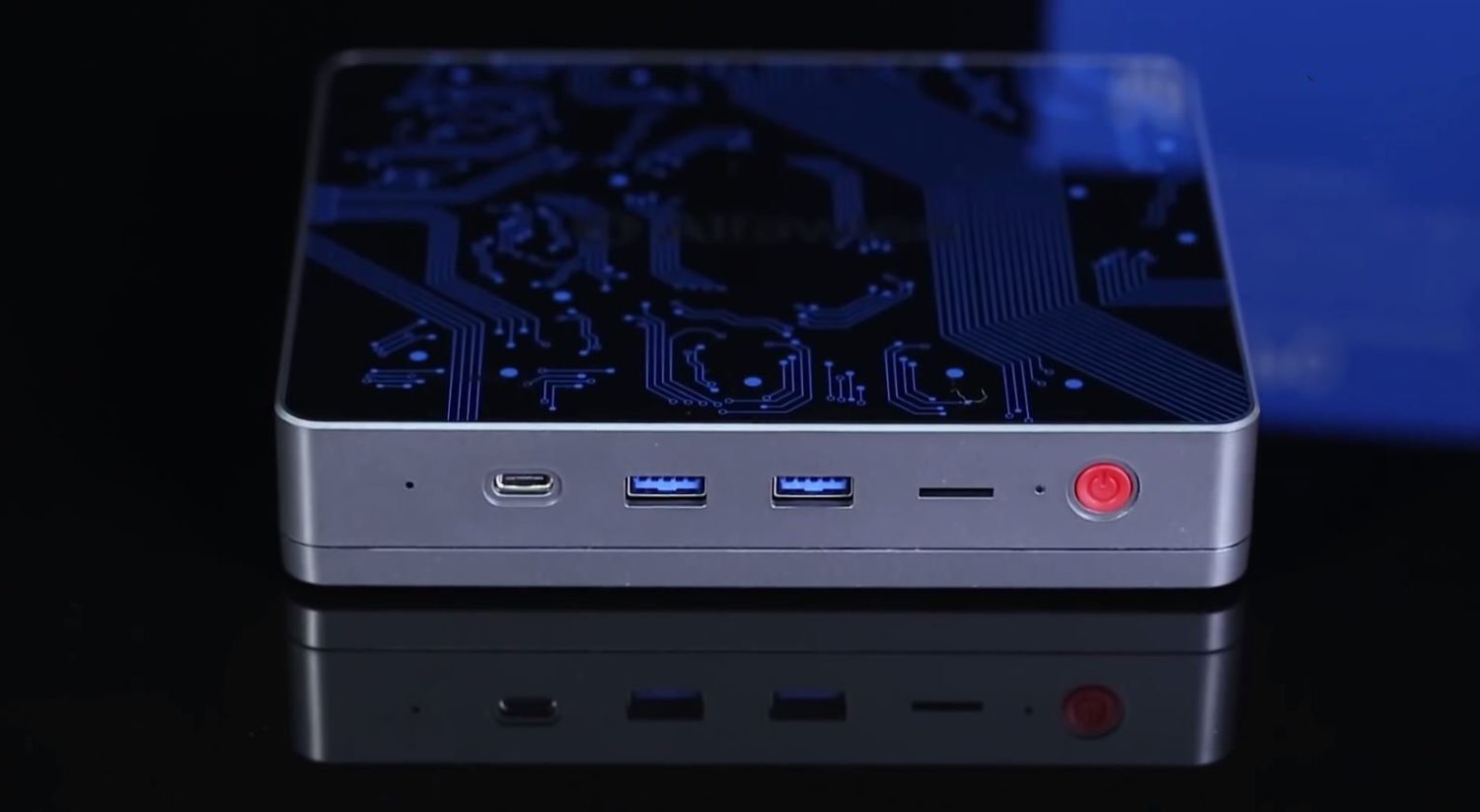 Alfawise makes sure that the user gets the best comfort while using T1. That is why the most used ports (2x USB 3.0, Type-C port), SD card reader, the button, power LED, and the microphone has been shifted to the top. So no turning the Mini PC from side to side to connect some wires, or insert SD card. Meanwhile, the rear embeds VGA, HDMI 2.0, DC output, LAN and 2x USB 3.0, and a 3.5mm audio jack. In fact, the design is ideal to place behind the display source or on the wall as the MINI PC supports VESA or wall-mount. The manufacturer is too generous as well giving a PC holder to make the display similar to VESA support monitors, so don’t expect those jumbled-up wires running your space and room’s beauty. 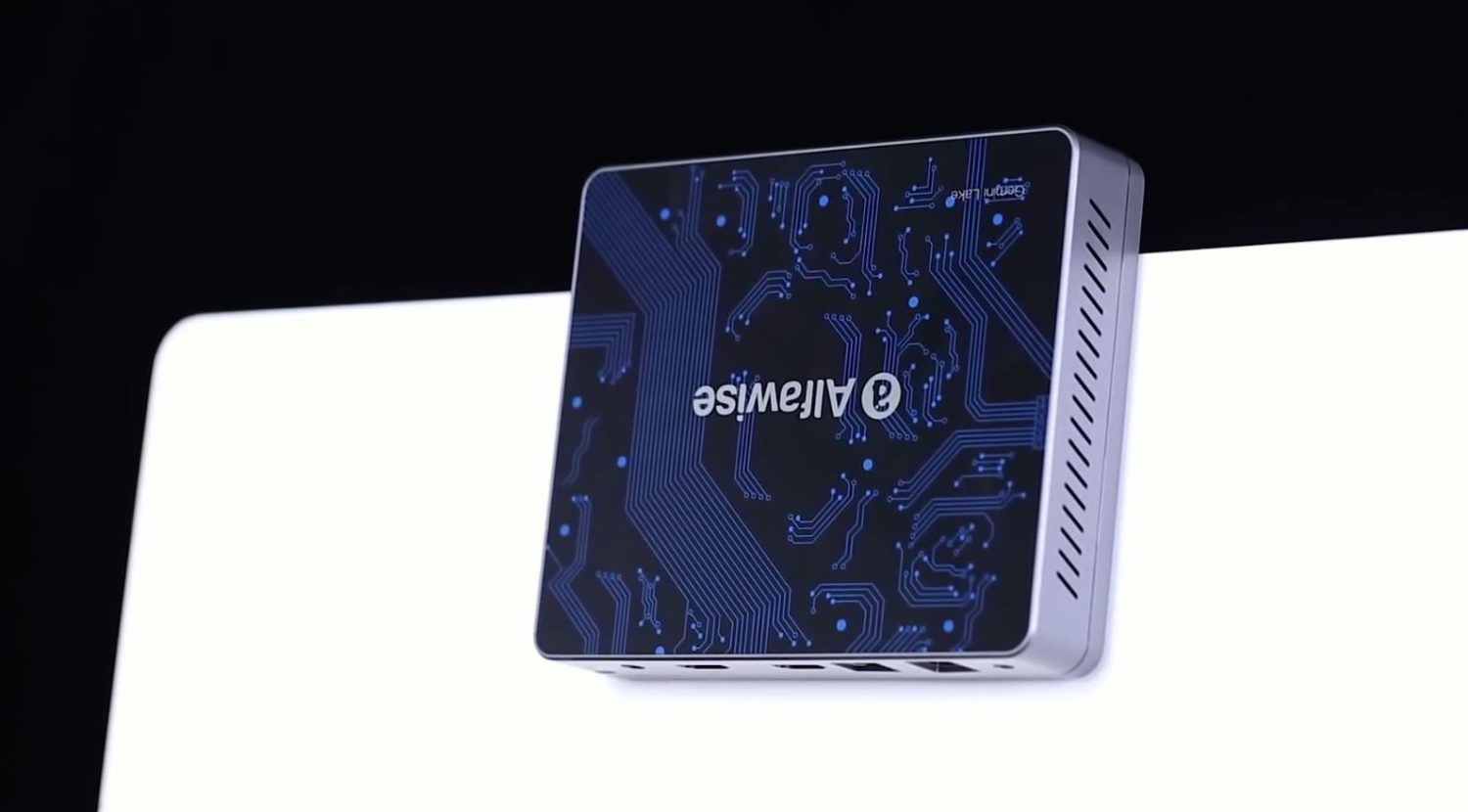 Now comes the best part of the design! The bottom of the chassis has an expansion which supports external hard-drive and even M.2 2242 SSD storage card. 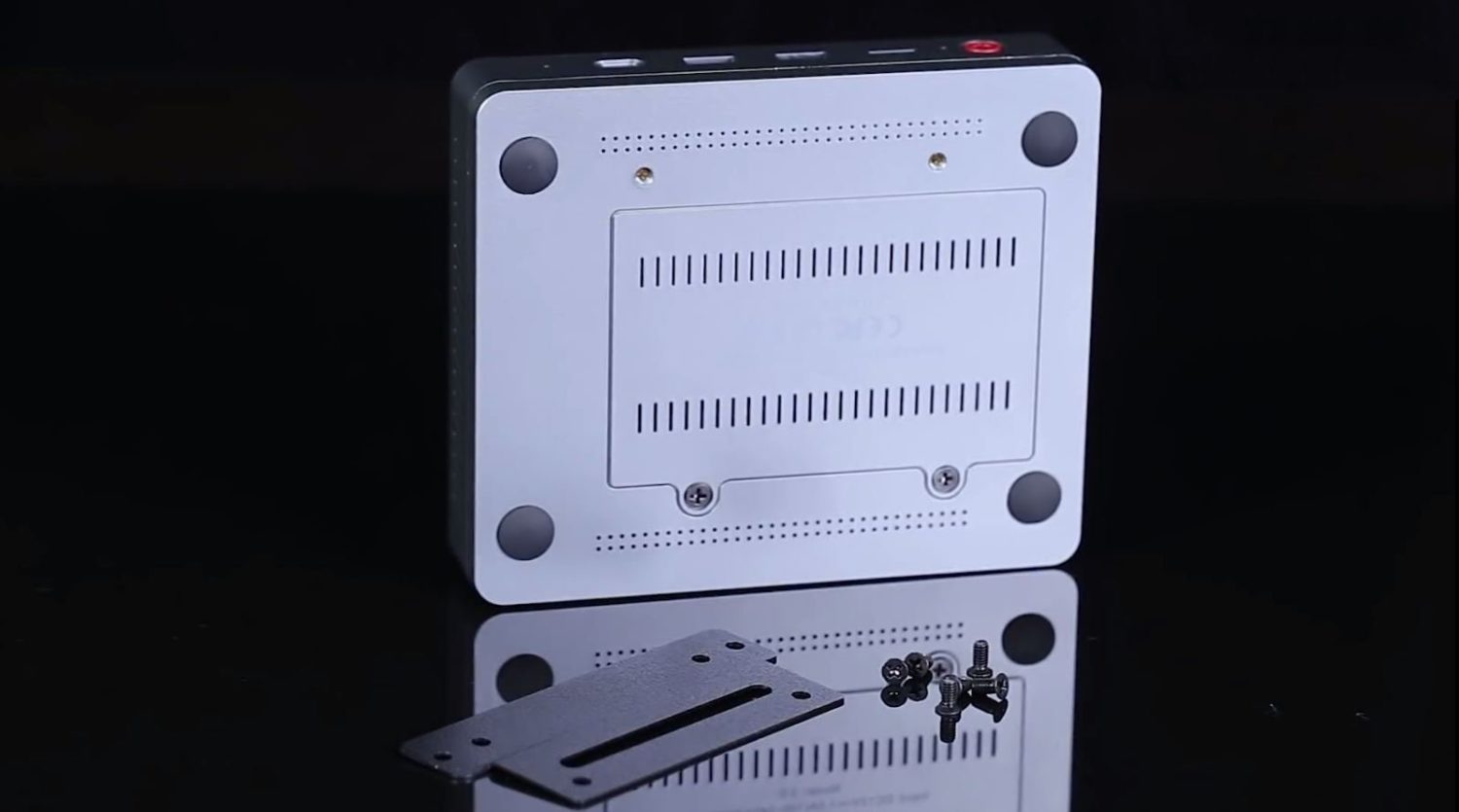 Summarizing the whole thing, the Mini PC is truly compact. The expansion added at the bottom is quite credible. It supports WESA and a PC holder is given in the box as well. Thus, what more portability options you can get from a $200 Mini PC easing your life

Like we said, the Intel Gemini Lake aka Celeron N4100 processor is the selling point of Mini PC. The new Gemini-Lake x86 quad-core processor is capable of reaching 2.40GHz in turbo mode. Along with the SoC, Intel UHD 600 (@700MHz) as the GPU, you can expect to run a 4K video at freaking 60Hz This is way better than the previous generation supporting 4K at 30 Hz (30 fps).

The SoC is coupled with the new 4GB DDR4 RAM and 64GB eMMC 5.0 storage. Both of these aspects define a $200 Mini PC. With the starting price of Intel N4100 being $107, further adding a DDR4 RAM and eMMC 5.0 technology, the manufacturer is indeed keeping the profit margin tight. If the 64GB eMMC 5.0 isn’t enough for you, you can add more storage up to TBs from the internal HDD or SSD via that expansion port or an external HDD via USB 3.0 port. Sadly, the 4GB RAM is all you get as it’s fixed and not replaceable.

If we move to the Benchmark performance, Intel Gemini Lake is 60% faster than the old Apollo Lake. You can see the Benchmarks below:

Concerning the GPU performance, Intel UHD 600 is 20% better than Intel UHD 500 in the benchmarks.

You can play some old 2007 to 2011 games on it on medium and high settings and even some Windows store games like Asphalt 8 on high graphics. But the latest games will start to lag even in the lowest settings possible and even the device starts to get heated. Here’s an example: 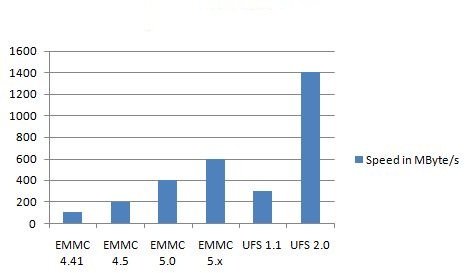 In short, there are some nice upgrades in the graphics section. The 4K playback is improved to 60Hz. You might expect 8 to 10 fps increased in gaming when compared to Intel UHD 500. And that’s all. The process in Apollo Lake and Gemini Lake remains the same which is 14nm. Seriously, nothing that much for Gemini to brag

Another highlight of Alfawise T1 Mini PC is that offers numerous connectivity options. Let us know if you have seen four USB 3.0 ports, a USB 3.1 Type-C in a $200 Chinese Mini PC. We have divided the connectivity to two sub-sections: 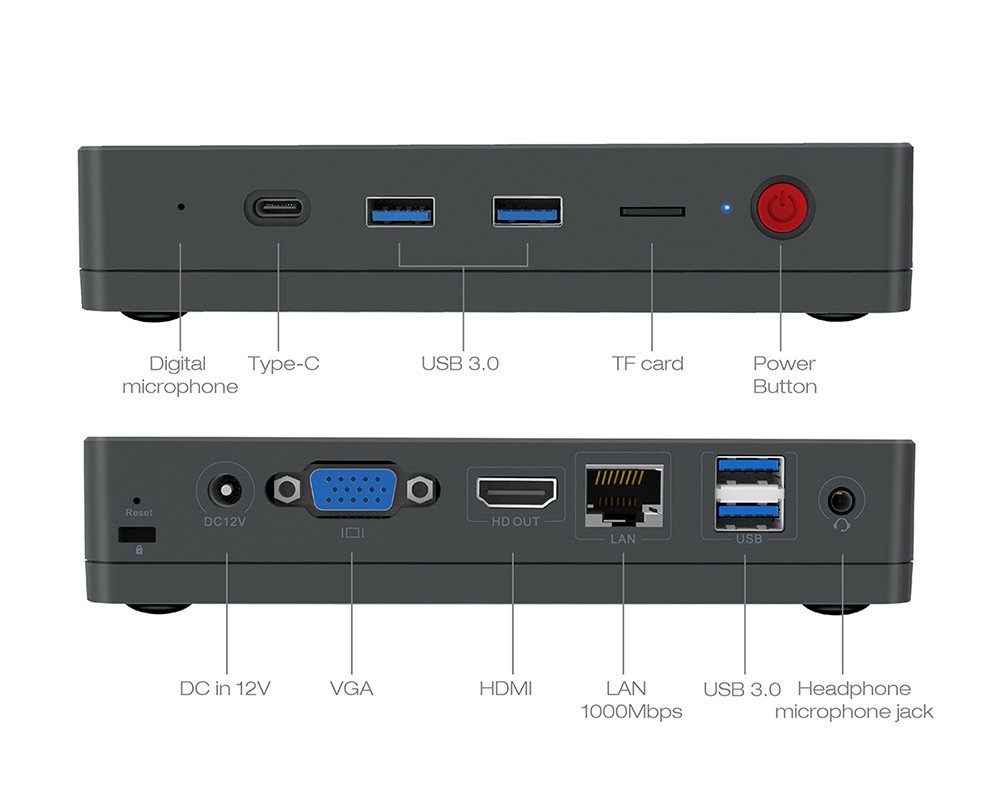 Thus, the Mini PC has every port you need even the old VGA port, the latest Type-C port, even the HDMI is multi-channeled. What more can you expect?

Talking about the OS, the Alfawise T1 runs on a pre-installed Microsoft Windows 10 (not activated). Now the 4GB DDR4 might be just enough for multi-tasking. However, you might need some extra space as the Windows itself occupies around 10GB. You can add expansion storage via the expansion slot, USB 3.0, TF card. The options are quite numerous. As there’s a microphone on the front, Windows 10 Cortana voice assistant can be used to it’s fullest. It also supports Linux operating system as well. 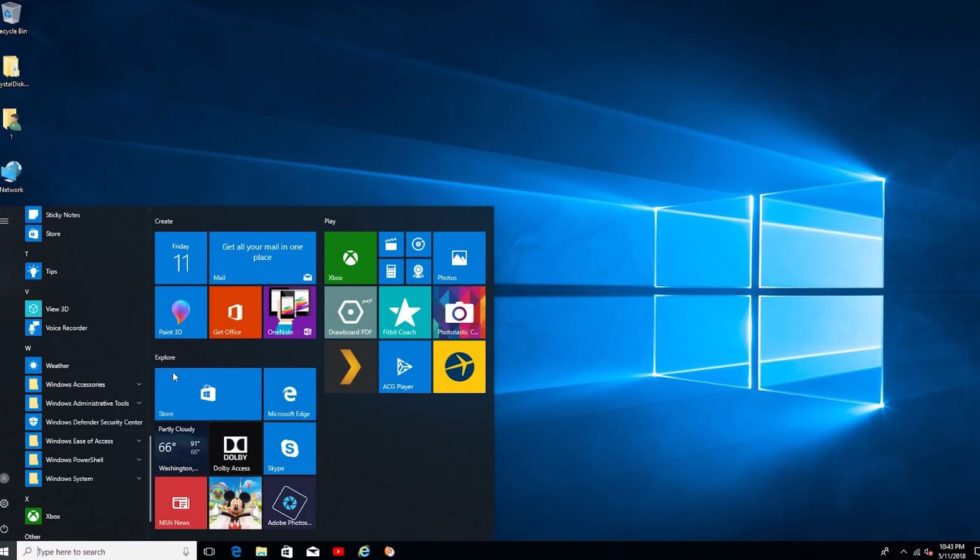 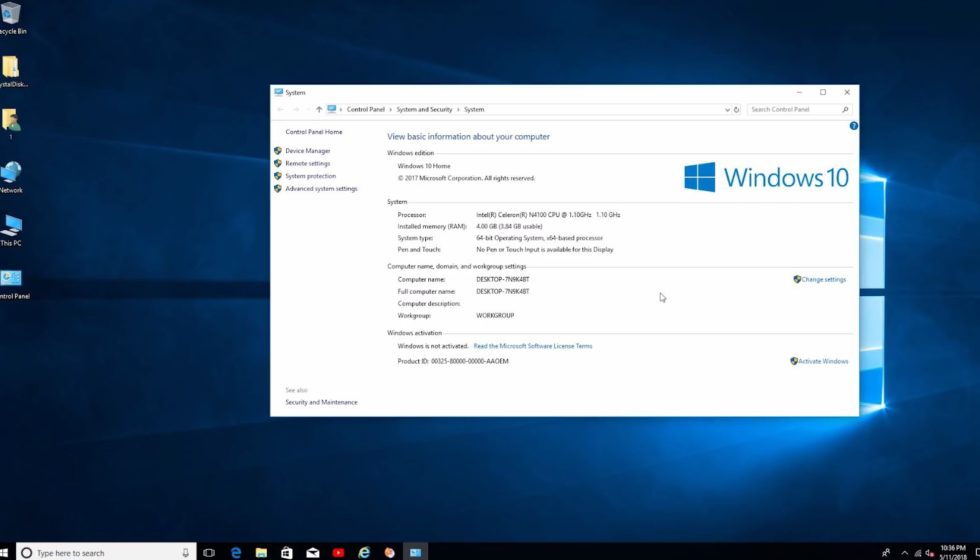 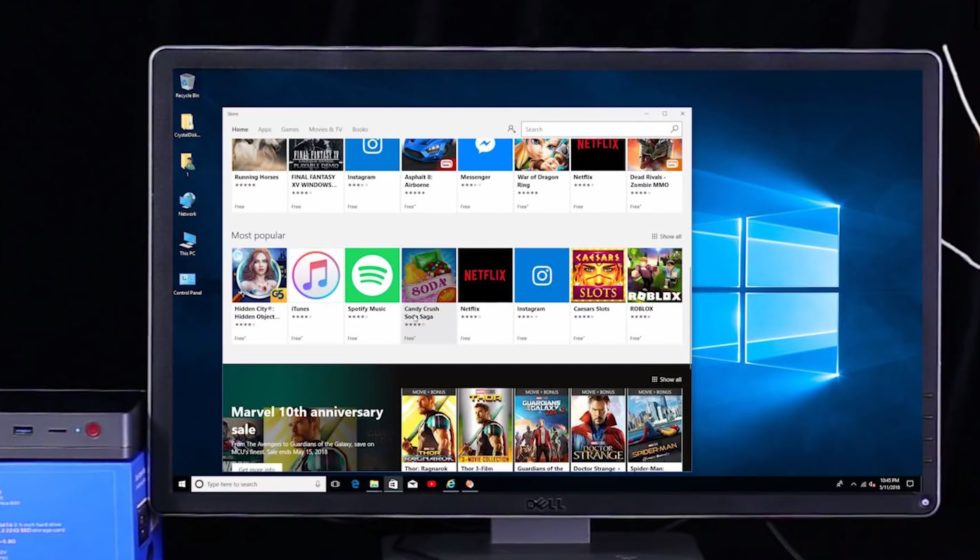 Summing up Alfawise T1 Mini PC Review, Intel Gemini Lake has just arrived in the Chinese Mini PCs. Alfawise is the first one to feature it. One might simply go for purchasing a Mini PC with a better and the latest processor. And even if the price is way better / cheaper than the old Apollo Lake ones, that Mini PC isn’t worthy of missing.

With the fanless plastic built, an SSD expansion slot added, numerous connectivity including USB 3.0 and Type-C, and most of all the new Intel Celeron N4100 Gemini Lake, we can finally say that: YES! IT’S WORTH OF SPENDING $200! We don’t know how Alfawise even manages to grab profit out of this device. The specs and hardware almost cost more than $200.

You can buy Alfawise T1 Mini PC for a price of $199.99 on Gearbest which is the lowest over the internet. Thanks to the flash sale going on. Here’s the link to the store: