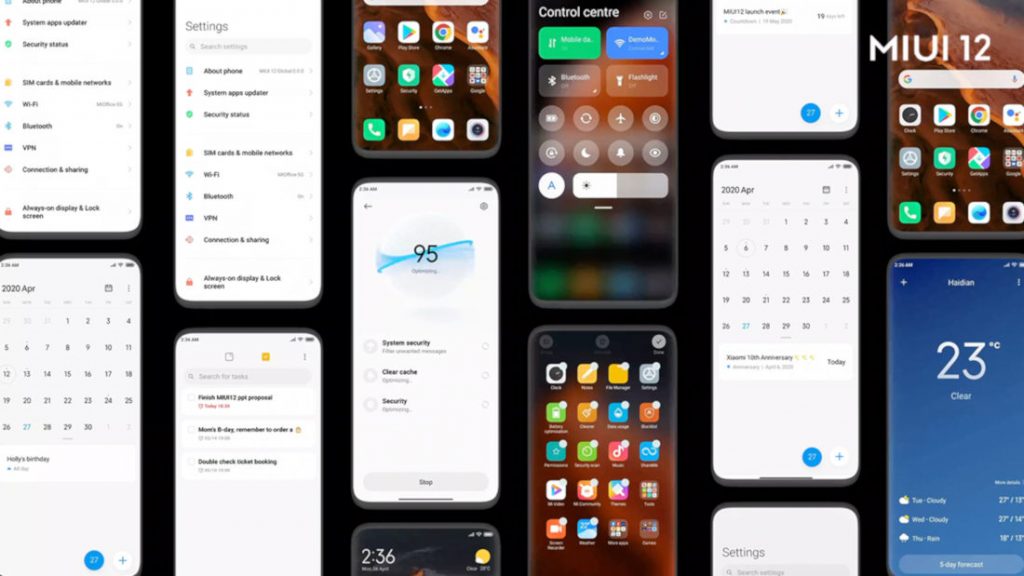 Yesterday, the UI of Xiaomi and Redmi phones turned 10 years. MIUI Android OS debuted in 2010. After 10 years, MIUI has also moved from V1 to V12. Here are the every MIUI version Screenshot and MIUI Stats:

Every MIUI Version Screenshot and Stats

MIUI Screenshot – View Every MIUI Version and Its Features 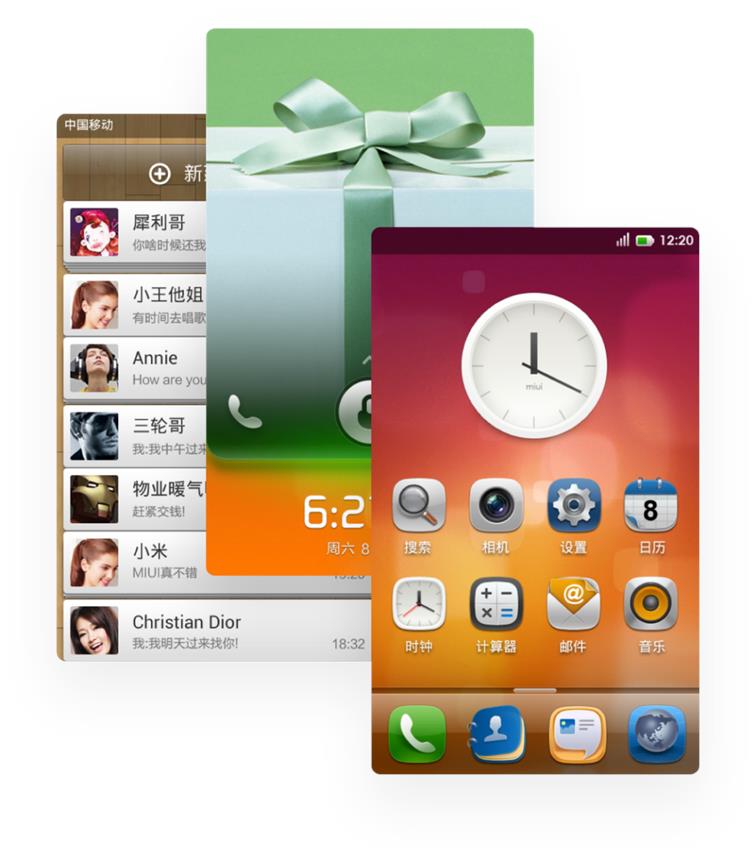 On August 16, 2010, MIUI V0.8.16 officially released on the MIUI Forum. 100 users tested and used this version. To this day, you can still see the names of those 100 users embedded in the statue present in Mi Technology Park, Bejing, China.

The first version of MIUI focused on the design of text messages, contacts, and phone calls. Since there were only 3 developers at that time, the design is not complicated. 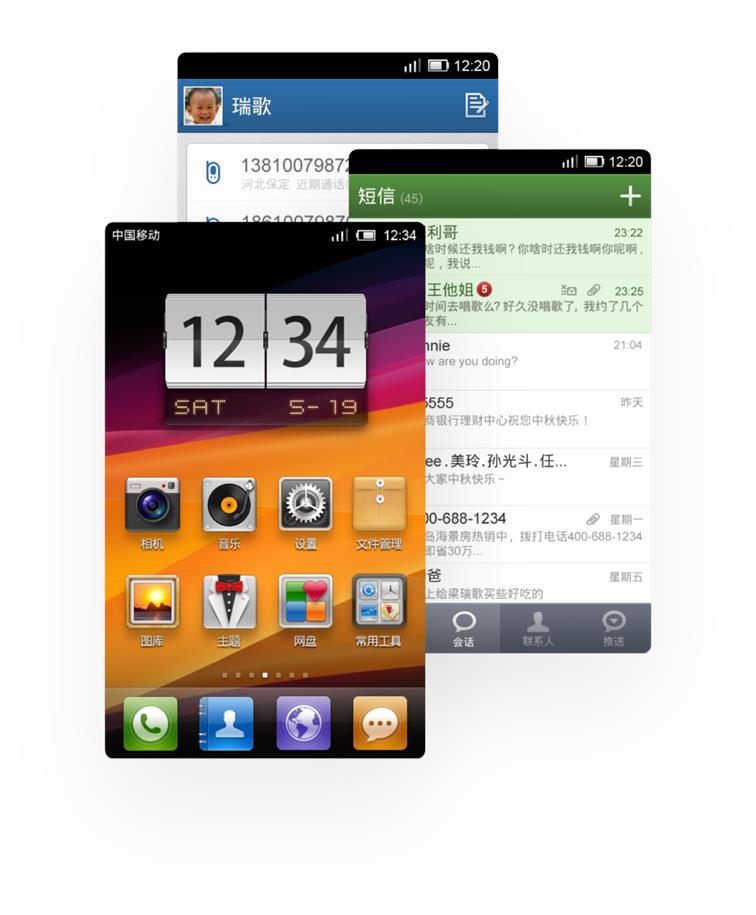 More than two months after the first version, MIUI V2 entered the stage. 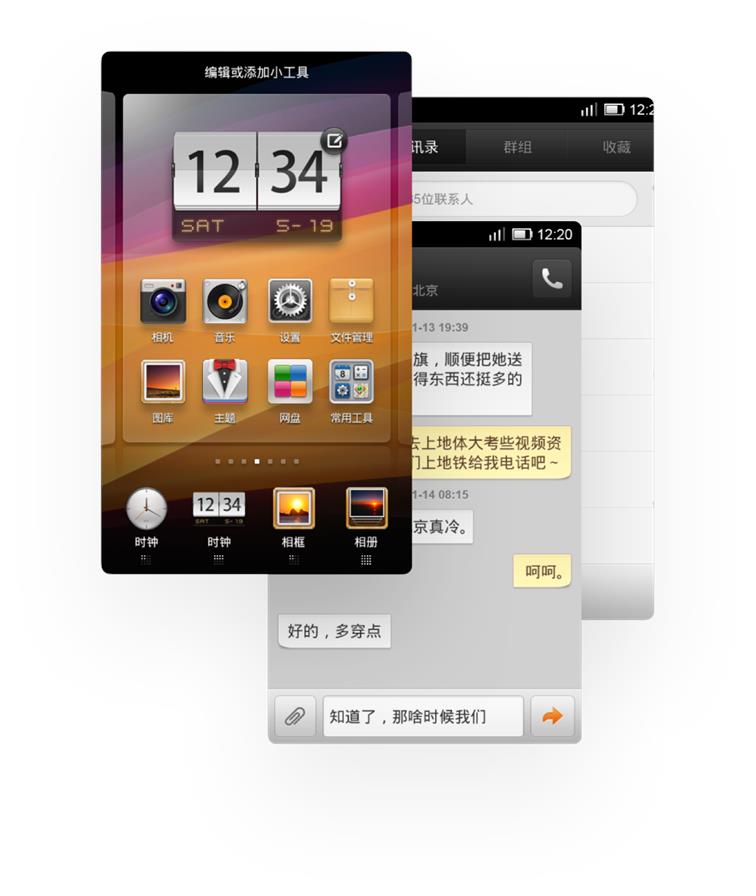 In addition to the original guest mode and the volume key to wake up the screen when the screen is locked, the biggest change in MIUI V3 can be seen with the introduction of the customizable lock screen and customizable theme.

With the ever-changing framework developed by Xiaomi, that is, the MAML language and the MORE rendering engine, designers can easily create various lock screens and themes. 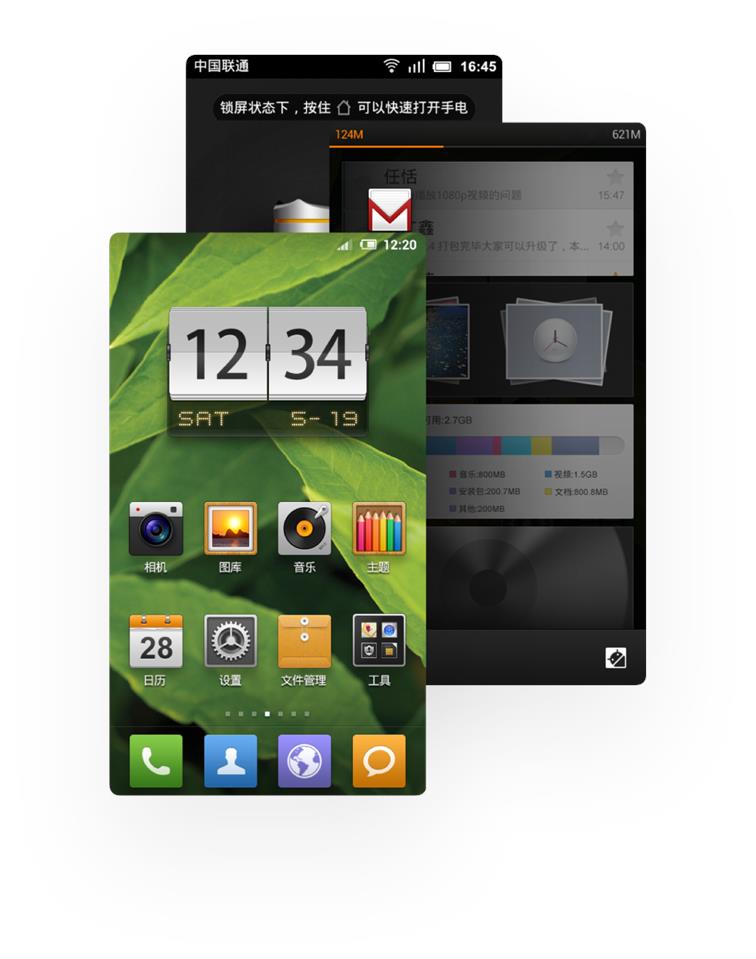 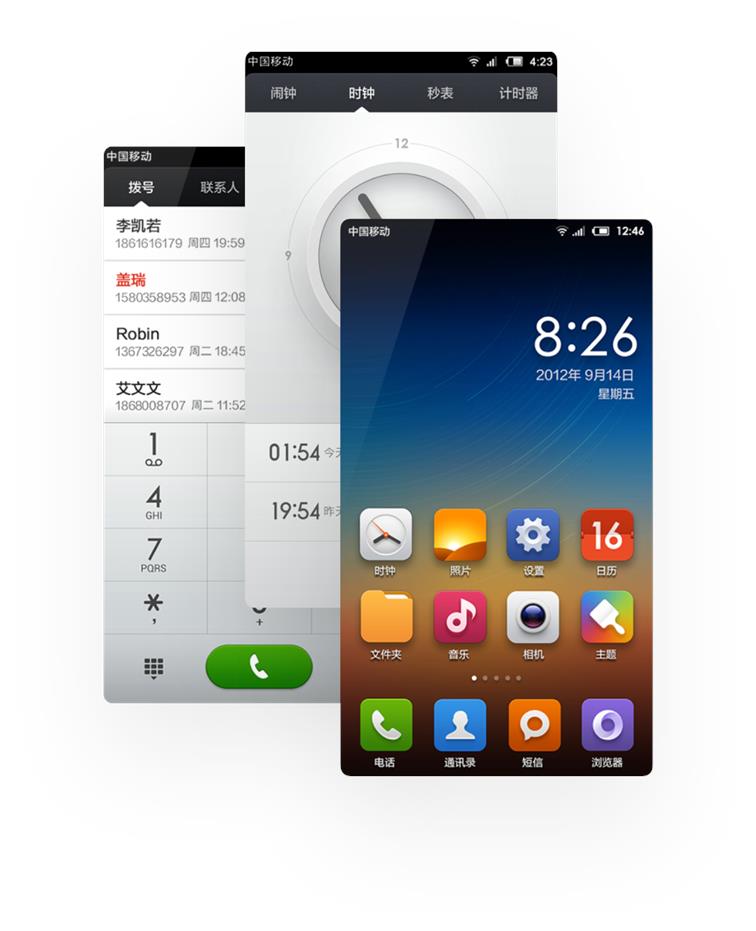 Starting from MIUI V5, the design style starts to simplify. The T-shaped structure proposed by MIUI V5 influenced the design of upcoming generations of MIUI.

More importantly, the runtime permissions introduced in MIUI V5 were nearly three years ahead of native Android, and this feature is the cornerstone of Android user privacy protection. 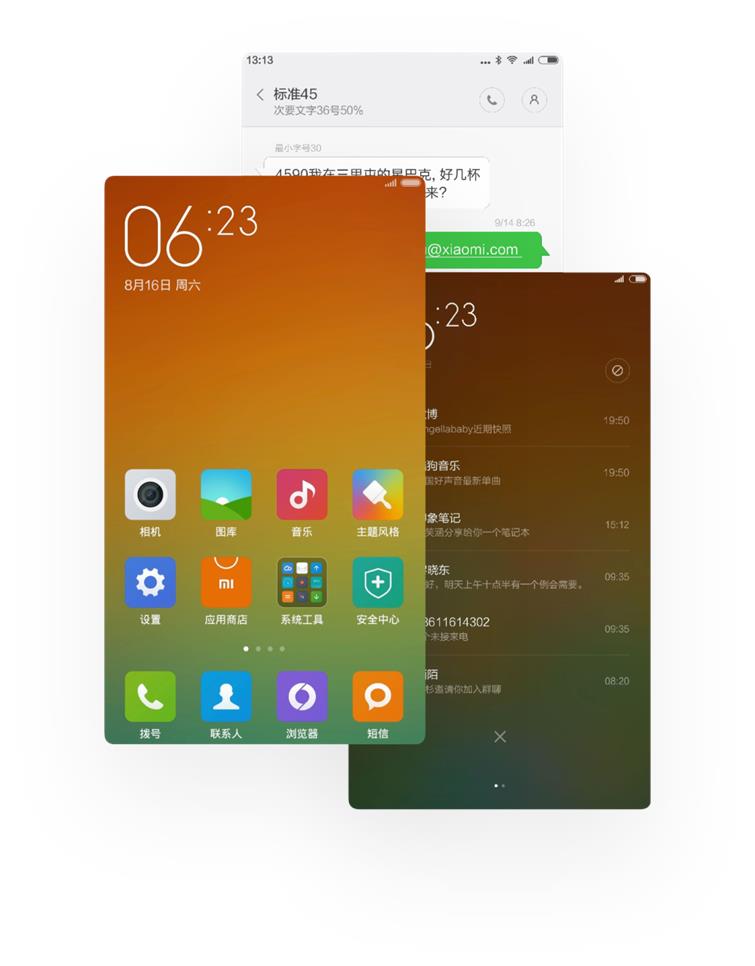 On the fourth anniversary, MIUI 6 moved to a new minimalist design, the design which is MIUI famous today. Only by refining the nature of the phone, focusing on the content you care about, and integrating your familiar scenes, can you directly achieve a wonderful experience. This is the minimalist aesthetic of MIUI.

And the pioneering functions such as tag number blocking, unimportant notification, traffic correction, and bracelet-free payment, made the experience easier. 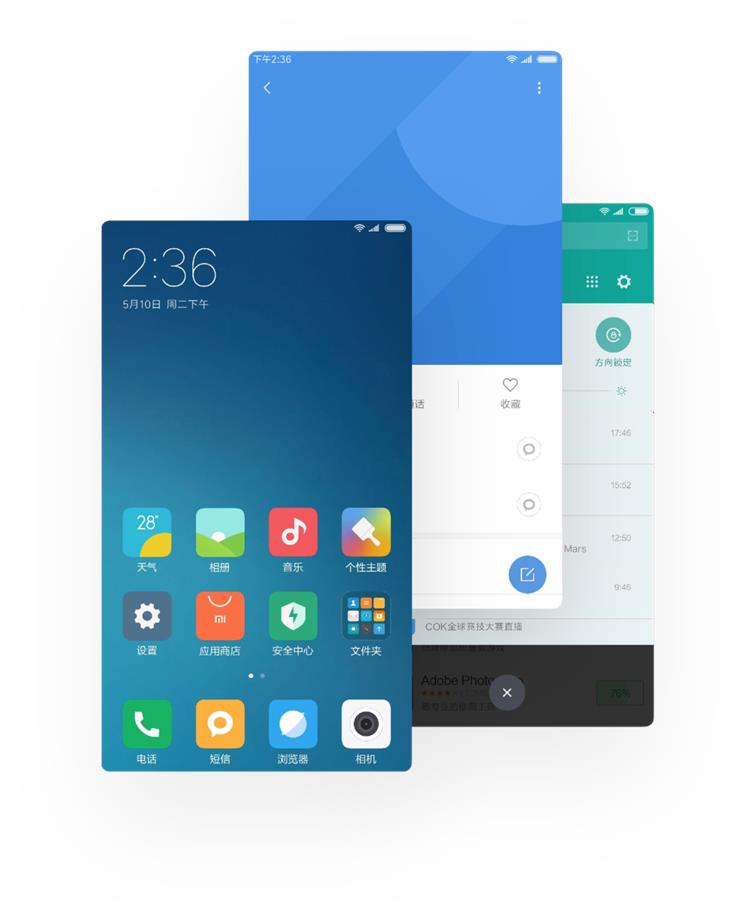 MIUI 7 had 4 sets of different default themes providing more variety in the UI: 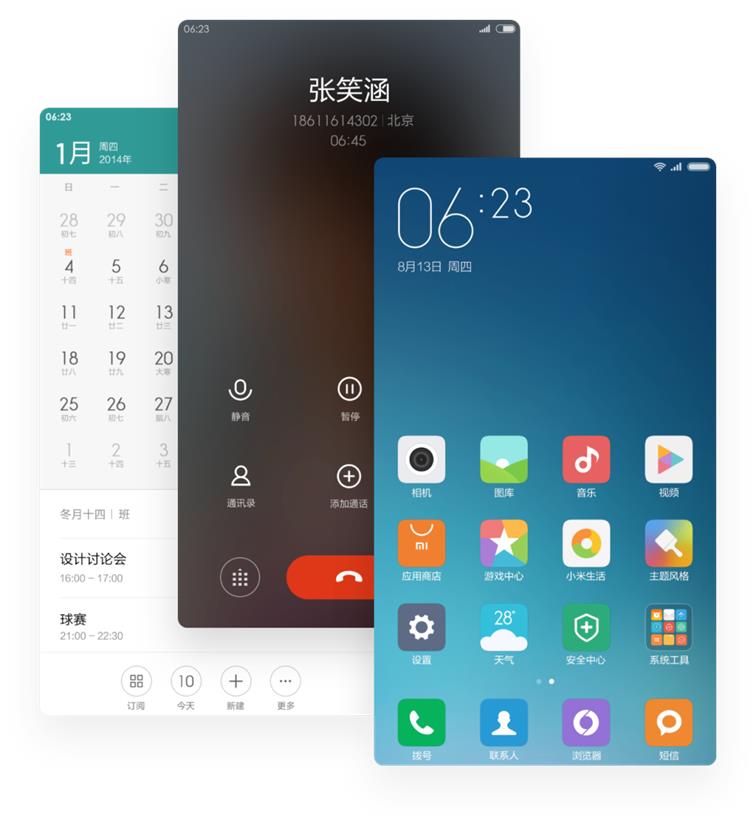 MIUI 8 reorganized all aspects of the system with colors and animations. Also in this version, MIUI added the Xiao Milan Pavilion font, becoming the first phone system in China to customize fonts. 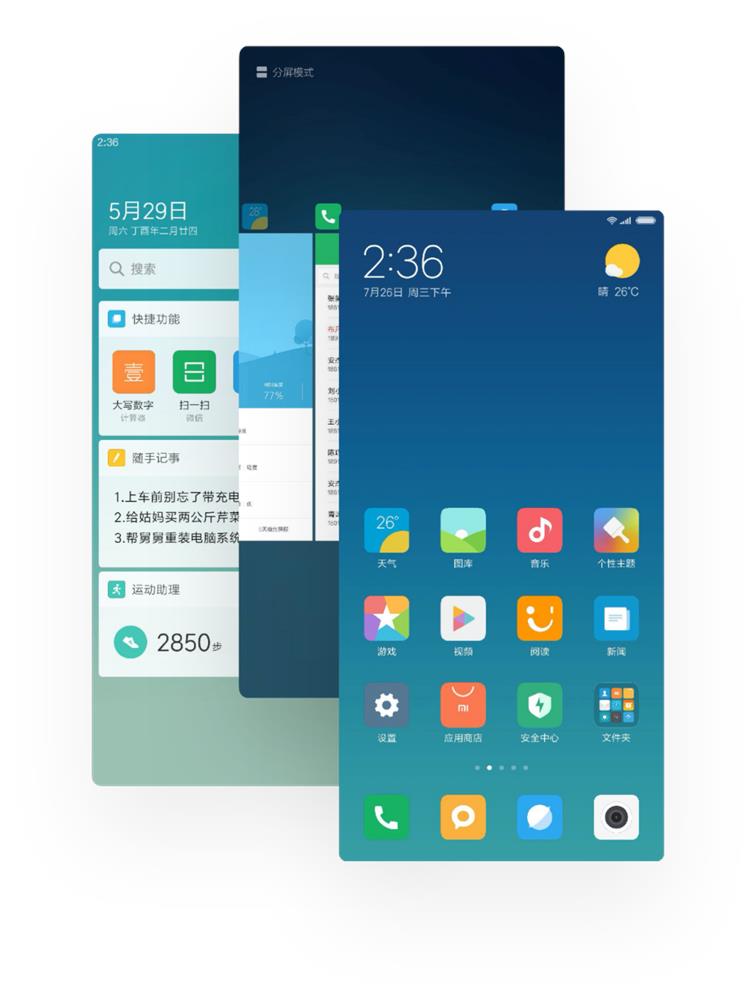 MIUI 9 adopts a simple, light, and vivid design, which makes the phone efficient and full of life. It focuses on a smooth experience, overcomes the problems of the phone system stuck, slow, and hot, and provides a lightning-fast operation experience.

Functions such as portal, information assistant, a quick search for photos, etc., make the operation more efficient. Also in this version, Xiao Ai came to MIUI. The Xiao Ai voice assistant made voice search more efficient since there’s no Google voice/services assistant in China. In MIUI 9, the iconic full-screen gestures were also introduced as well which are still used in the latest version. 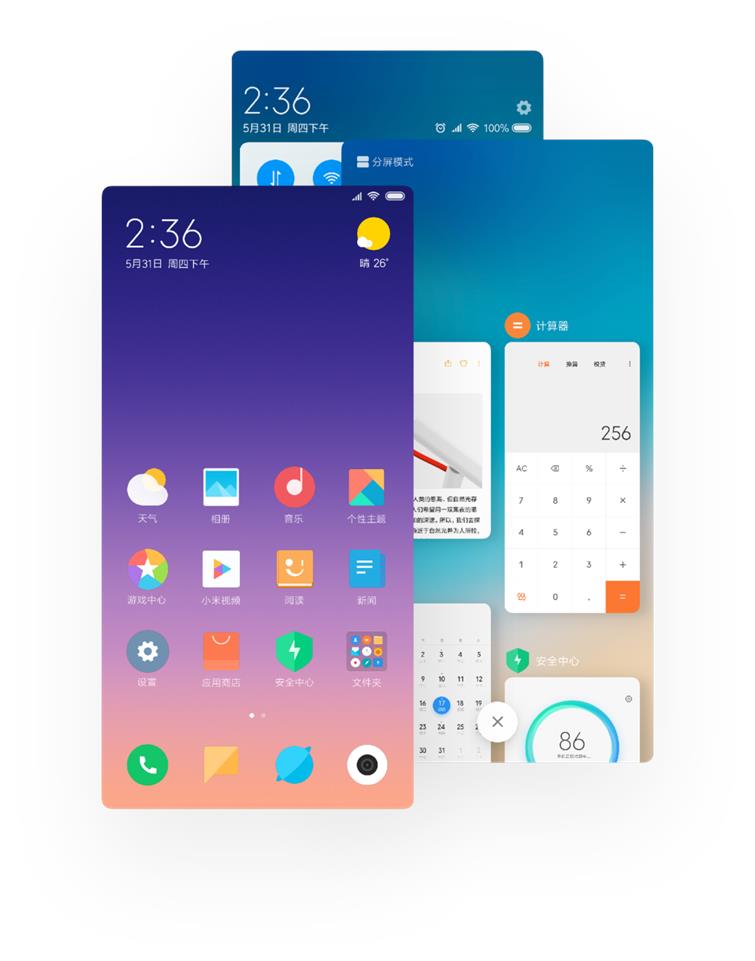 We can call MIUI V10 as an ‘AI-supported full-screen system’. With the trend of full-screen smartphones starting MIUI 10 shifted to full-screen design in order to follow this trend. The new design language brings the user a full-screen experience integrating software and hardware. MIUI 10 further improved the smooth experience of the system and provides a faster-than-lightning operating experience through AI pre-loading and optimizations.

A tip here: Xiaomi was the first one to start the full-screen smartphone era. The credit goes to the Xiaomi Mi MIX series.

Natural and pleasant sounds were added in for the notifications and ringtones. Xiao Ai was closely integrated with the system and it could handle complex mobile phone operations in one sentence, bringing the mobile phone system into a new stage oriented by user intentions. The connection between MIUI 10 and smart AI products (Mi home) become more convenient and faster. 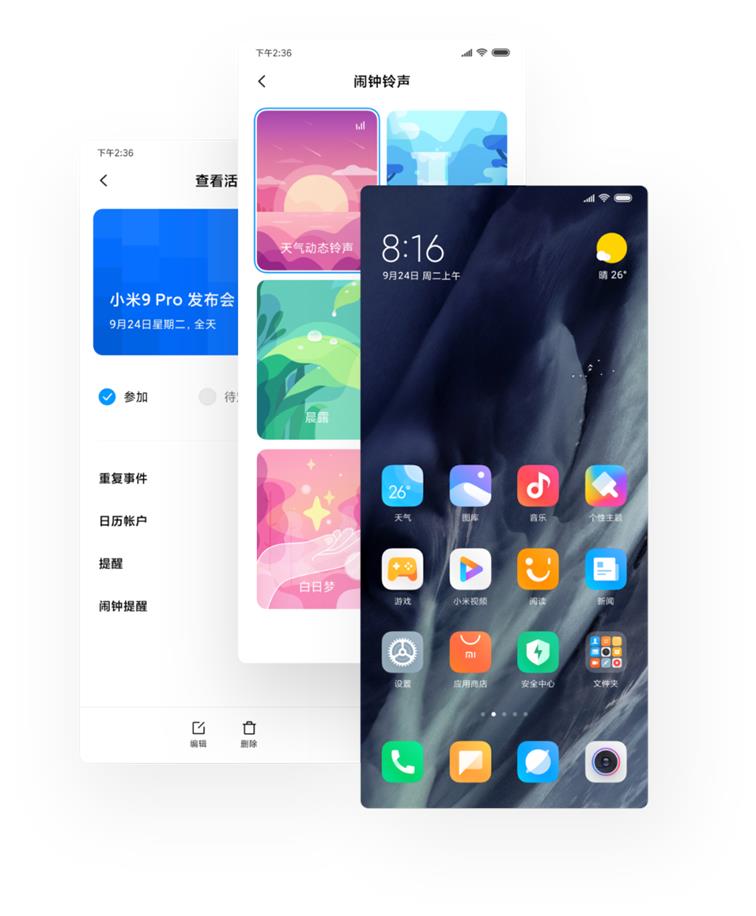 The slogan for this version was ‘Efficiency, innovation, both sound, and color’. The interface of MIUI 11 removed redundant symbols, leaving only the necessary information and content, pointing straight to the core at a glance.

The first AI call brings convenience to more people. Another pioneering function was the earthquake early warning. Starting from this generation, Xiaomi themes have entered the era of free. 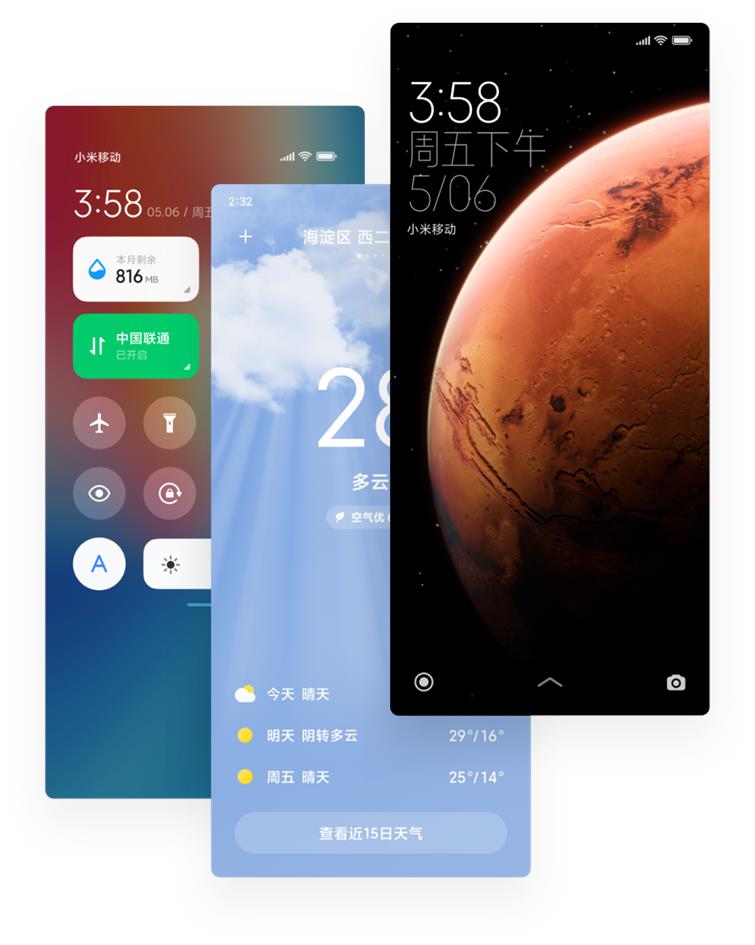 Now the latest MIUI which is MIUI 12 has the slogan ‘Touch the imagination, feel the reality’. MIUI 12 is the pinnacle of MIUI’s ten years, and it is the perfect combination of top dynamic effects and aesthetics. It’s the UI with the most dynamic effects and animations.

The overall design style is completely new, and self-developed technologies are applied from the bottom to the top of the system. The Miyou Light Cone animation architecture, which is significantly ahead of Android, brings real motion effects and synaesthetic visual design across languages ​​and cultures, as well as super wallpapers that breakthrough space constraints.

The world’s leading privacy protection capabilities, through the three privacy weapons of flares, interception nets, and hidden masks, defend your data rights. The global free window may be the world’s best mobile phone multitasking solution. Accurate phone motion detection algorithms and negligible power consumption are the highlights of this UI. This is literally the best Android UI right now.

You can also read the MIUI 12 review we made. And here is the list of latest Xiaomi devices that supports MIUI 12. You can also download ROMs of MIUI 12.

It’s time to end this post. Surely, it brings back some good old memories to see every MIUI version screenshot. Let’s see what the future holds for MIUI. Which one is your favorite MIUI version? Let us know in the comment.