Samsung is a technology company well known worldwide for a specific product, its smartphones, however, they also focus on creating one of the most important parts of these, the processors. Today we are going to compare three of them to see how the company has evolved, so welcome to this new Exynos 1080 vs 990 vs 980 comparisons.

Before we talk about the specifications with which these two processors work, let’s talk a bit about the date they were released. First, there is the most recent, the Exynos 1080, which saw the light of the market a month ago, on November 12 of this year. Then we have the Exynos 990 which was released just a month earlier, on October 24. Finally, there is the Exynos 980, which was presented a year ago, on September 4, 2019.

First off let us start with the process technology which determines the power consumption and performance of the SoC. Keep in mind the lower the number the better is the performance as well as battery life efficiency. Starting with the Exynos 1080, and knowing that it is a processor that will have updated specifications, it is not surprising that it has a 5nm EUV process, thus positioning itself as one of the strongest on the market. Having said that, and while the other two processors work great too, they are a bit behind in this regard.

Getting to talk about the CPU inside these processors, the Exynos 1080 works along with a tri-cluster octa-core design CPU with a 1 + 3 + 4 cores configuration that is arranged as follows:

On the other hand, the Exynos 990 also has a tri-cluster octa-core design, but that is based on a 2 + 2 + 6 configuration that is arranged as follows:

Lastly, we have the Exynos 980, which has a smaller dual-cluster 2 + 4 design that is arranged as follows:

At the moment of seeing how the CPU of these two processors is distributed, we can easily realize that the new Exynos 1080 has superior strength, and it is that it not only has more high-performance cores (two compared to the other two processors), but these also have a higher frequency, both the high-performance and the power-efficient cores. Without a doubt, this new SoC will do its thing, and it will be a tough competitor to beat.

Turning to talk about the GPUs that are inside these two powerful processors, in terms of graphical performance, the Exynos 1080 features the ARM Mali-G78 MP10 GPU, which works with ten cores and a clock rate of 720mAh. On the other hand, the Exynos 990 features the latest GPU by ARM which is Mali-G77 MP11 GPU, which is the first GPU which is based on the Valhall architecture ARM claims that Mali-G77 has a 20% performance uplift and 20% power efficiency gain in comparison to the previous generation which is Mali-G76, and lastly, the Exynos 980 has an ARM Mali-G76 MP5 GPU that has 4 cores and a clock rate of 800MHz.

To better check how a processor works, you have to look at the score it obtains in the different Benchmarks, and today we will see the scores of these SoCs in Geekbench and AnTuTu. 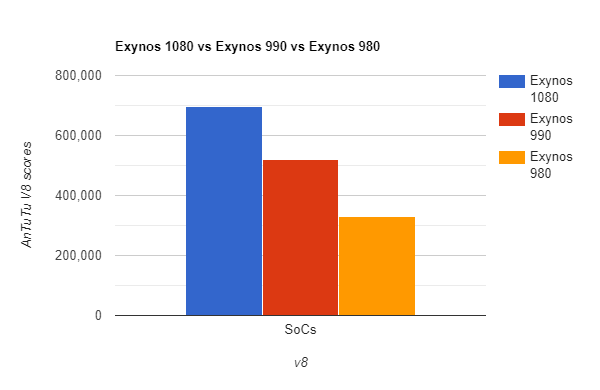 Looking at the overall score obtained by each processor, we can see that the Exynos 1080 has more power, which was to be expected thanks to the specifications it has.

If we talk about connectivity, as expected, the Exynos 1080 has 5G connectivity with support for mmWave and sub-6GHz bands, something that brings the new generation of mobile networks even closer to the mid-range. It also has, of course, support for WiFi 6 and Bluetooth 5.2, so any need for next-generation wireless connectivity should be covered in the devices that choose to integrate this SoC.

On the other hand, the Exynos 990 uses the external Exynos Modem 5123 (external) with a downloading speed of 7350Mbps, however, no upload speed was mentioned by Samsung. Despite the overwhelming fast download speed, we can’t deny the fact that an external modem takes more footprint as well as power than the integrated one. Also, it supports the mmWave 5G networks.

Lastly, the Exynos 980 supports the Sub-6GHz frequency used for the 5G network, also having an external 5G modem which is Exynos Modem 5100 to run the 5G network. Talking about the speed, Exynos 980’s Sub-6GHz speed is 2.55Gbps (Downloading) and 1.28Gbps (Uploading). Moreover, the 4G speed is up to 1Gbps in 4G and 3.55Gbps in dual mode.

Finally, to see what is the best option among these processors at the budget level, we have to know the price of the phones they are on. About the Exynos 1080, there is no specific information about the device that will have this processor, although according to some rumors, it should be found inside of a phone priced at around 999 to 1049 USD. On the other hand, the Exynos 990 can be found on the Samsung Galaxy S20 FE with a price of $699 and, lastly, the Exynos 980 can be found inside of the Vivo X30 Pro with a price of $779.

Select Exynos 990 if you want:

I hope you loved this Exynos 1080 vs 990 vs 980 comparisons. Which one is your favorite SoC? Let us know in the comments.