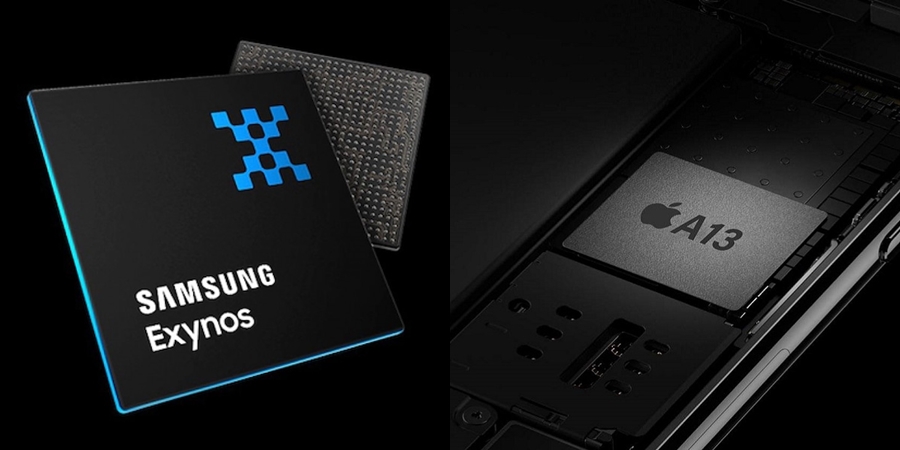 A few months ago, Samsung surprised its users with the launch of a new processor, and it is the Exynos 1080, which brings great features. Due to this, we have decided to compare it with a processor released a while ago, and it is the A13 Bionic, to be able to appreciate the different changes that companies have made in their processors. Stay with us in this Exynos 1080 vs A13 Bionic comparison to see how the technology with which smartphones work has changed and advanced!

Before we talk about the specifications with which these two processors work, let’s talk a bit about the date they were released. The A13 Bionic was launched a year and a few months ago on September 11, 2019, while, on the other hand, the Exynos 1080 was launched last month, on November 12.

First off let us start with the process technology which determines the power consumption and performance of the SoC. Keep in mind the lower the number the better is the performance as well as battery life efficiency. Starting with the Exynos 1080, and knowing that it is a processor that will have updated specifications, it is not surprising that it has a 5nm EUV process, thus positioning itself as one of the strongest on the market. Having said that, the processor released by Apple relies on the previous and simple 7nm process, which although not as updated, is still capable of providing great performance.

Getting to talk about the CPU inside these processors, the Exynos 1080 works along with an octa-core design CPU with a 1 + 3 + 4 cores configuration that is arranged as follows:

On the other hand, the A13 Bionic has a dual-cluster design (2 + 4) that is arranged as follows:

At the moment of seeing how the CPU of these two processors is distributed, we can easily realize that the new Exynos 1000 has superior strength, and it is that it not only has a greater amount of high-performance cores (one more compared to the Apple processor), but these also have a higher frequency, both the high-performance and the power-efficient cores. Without a doubt, this new SoC will do its thing, and it will be a tough competitor to beat.

Turning to talk about the GPUs that are inside these two powerful processors, in terms of graphical performance, the Exynos 1080 features the ARM Mali-G78 MP10 GPU, which works with ten cores and a clock rate of 720mAh. On the other hand, the A13 Bionic has an Apple-designed four-core graphics processing unit with 20% faster graphics performance and 40% lower power consumption than the A12’s.

Exynos 1080 vs A13 Bionic – Benchmark Comparison 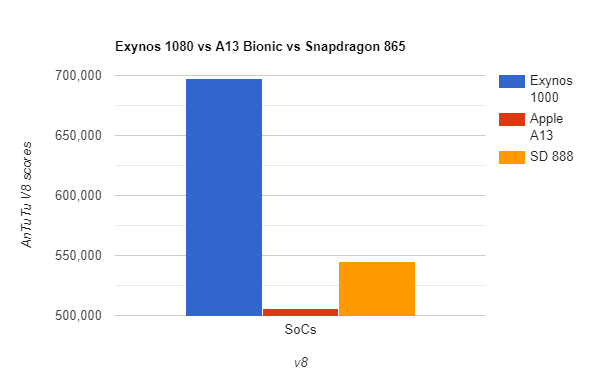 Exynos 1080 vs A13 Bionic – Connectivity Comparison

Unlike the recent high-end processors, Apple’s A13 Bionic doesn’t provide either the external or internal 5G modem. Moreover, there’s the 4G LTE modem present continued from Apple A12 and it also has dual-band Wi-Fi, Bluetooth 5.0, USB 3.1, and a type C port, NFC, and GPS. On the other hand, and although there is not much information about this point, seeing that the Exynos 1080 is such an up-to-date processor relative to its specs, it is expected to be capable of supporting 4G and 5G connectivity with ease.

Finally, to see what is the best option among these processors at the budget level, we have to know the price of the phones they are on. Concerning the A13 Bionic, this processor is available inside the iPhone 11 Pro Max which has a price of 1099 USD, while, on the other hand, there is no specific information about the device that will have the Exynos 1080 Although according to some rumors, it should be found inside the future Galaxy S30, which will be priced at around 999 to 1049 USD, being this the cheapest one.

I hope you loved this Exynos 1080 vs A13 Bionic comparison. Which one is your favorite SoC? Let us know in the comments.