Recently, Huawei Router AX3 Pro Global version is now available on Aliexpress. According to the sellers, this version also has the Huawei Router AX3 Pro English Firmware preinstalled which allows the user to change the location and language from Chinese to English. Moreover, the boxing, the user manual, and service card are also in English labeling.

Note: The global version doesn’t have 2 x 2.4G amplifiers. That is why it doesn’t have a same signal range in comparison to the Chinese version. I suggest you not to buy it if you want to run on 2.4G for wider range and lesser performance. Moreover, the OTA updates of the global version are stuck to an old update.

You can also read our Huawei Router AX3 Pro review to know the in-depth details about the router.

Huawei Router AX3 Pro Global Version is one of the best price-performance WiFi 6 router out there which also supports 160MHz bandwidth out of the box. With the sleek and angular design, it’s also the thinnest and the most good looking router out there. It occupies a space of 225 mm x 159.2 mm x 39.7 mm and weighs only 387 g.

Huawei router AX3 Pro has the model name ‘WS7200‘ and features the Chinese Lingxiao quad-core 1.4 GHz CPU along with 256MB RAM and 128MB ROM. This configuration allows it to connect to multiple devices up to 128.

For Huawei devices with WiFi 6 support, it can connect them with the much better WiFi 6+ technology, while for other WiFi 6 devices, it connects with the standard WiFi 6 protocol.

In terms of function and features Huawei router AX3 Pro global version has:

Previously, one was limited due to the Chinese language interface and couldn’t set these functions via the web page. However, since we have the Huawei Router AX3 Pro English Firmware preinstalled, one can easily set the advance settings from web page.

The app is Hilink which has a rating of 4.1 on the play store and is multilingual. This is the best rating given to a Chinese router app. The app function includes: 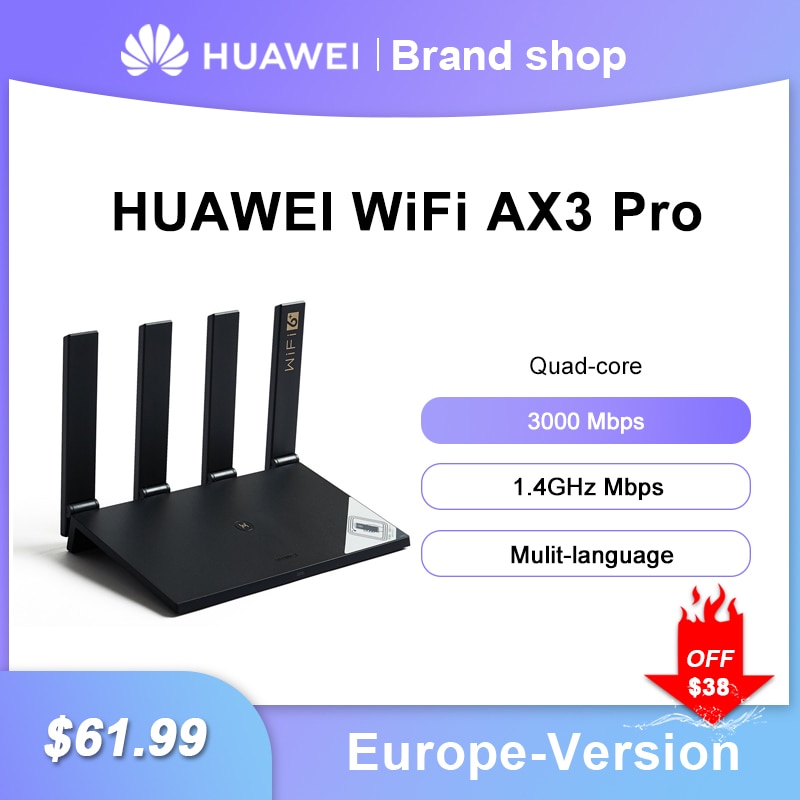 Update 23/4/2021: Please don’t buy a global version of the Huawei AX3 Pro which doesn’t have the two 2.4G amplifiers and is stuck on an old update. Because of this, the global version’s signal range is pretty limited. The Chinese version is the best and the webpage can be translated via the Chrome auto-translate feature. There’s the enhanced version of the router as well selling on Aliexpress with the two amplifiers but still, the range isn’t the same as the Chinese version.