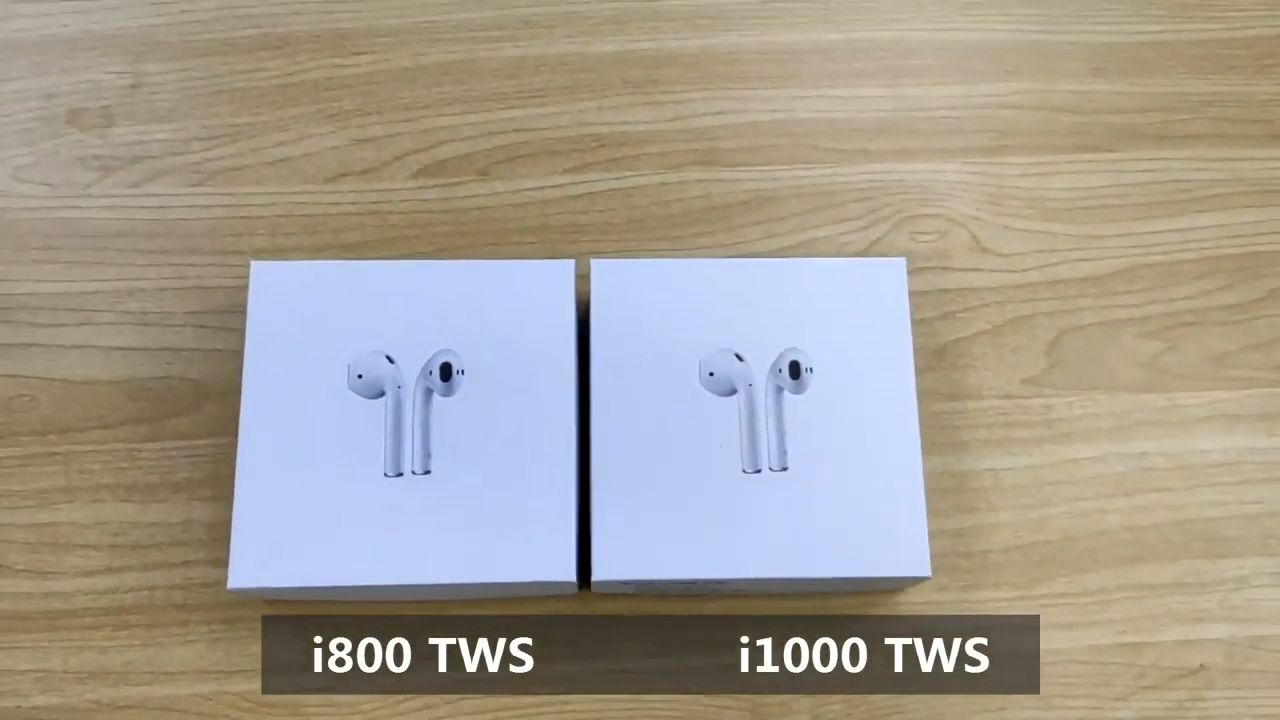 Choosing new earphones can be hard, we know that, you want the best of the best and that is also what we want you to get so get prepared because here we are once again helping you choose between two airpods clones, because maybe neither the of the ones we have talked about in the past have been your cup of tea, and we, the ThePhoneTalks team, get that, so now we are going to show you who we think is the winner between these airpods clones, the i1000 TWS vs i800 TWS and see which one is, in fact, the perfect airpods 2 clone, of course it will be only based on the specifications of each, but maybe you’ll like one better than the other based on your personal preferences, which one will it be though? Let’s find out.

Also read: i200 TWS vs i300 TWS – Cheap AirPods Clones They Never Told You

As usual, let’s start with the most important aspect of any and every audio system, the performance of the audio. Which one is the winner between the i1000 TWS and the i800 TWS?

Before we state the winner is imperative we remember you that airpods, clones or not, may not be the best choice if you want to have the best experience while listening to your favorite songs or videos as they were not really made for the general audiophiles but for people with a more active and productive lifestyle, and people who don’t have time to lose but still want to relax and listen to music on their way to their work or while coming back from it, if you think that the previous description fits your lifestyle then you should definitely get either the i1000 TWS or the i800 TWS. But which one sounds better? 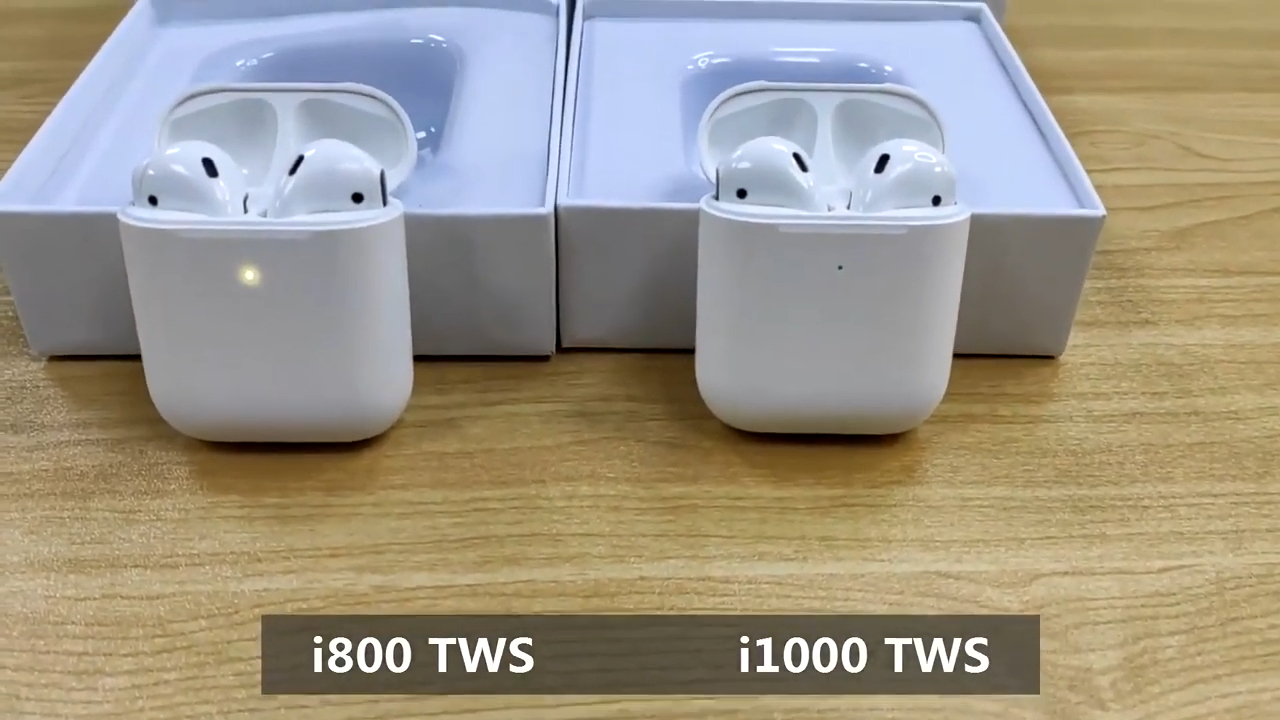 Well, both are actually pretty decent in this aspect, especially when taking the price into consideration, the voice of the singers sound pretty good as does the music itself, the sound reduction and the bass are also respectable in both and it’s really an overall relaxing experience to listen to music through the i1000 TWS and the i800 TWS.

However, the i1000 TWS’ performance was just better than that of the i800 TWS. The bass sounds are better and the sound reduction of it it’s just more polished and it really helps with the immersion.  The company advertises it as 5So the i1000 TWS takes the first point. 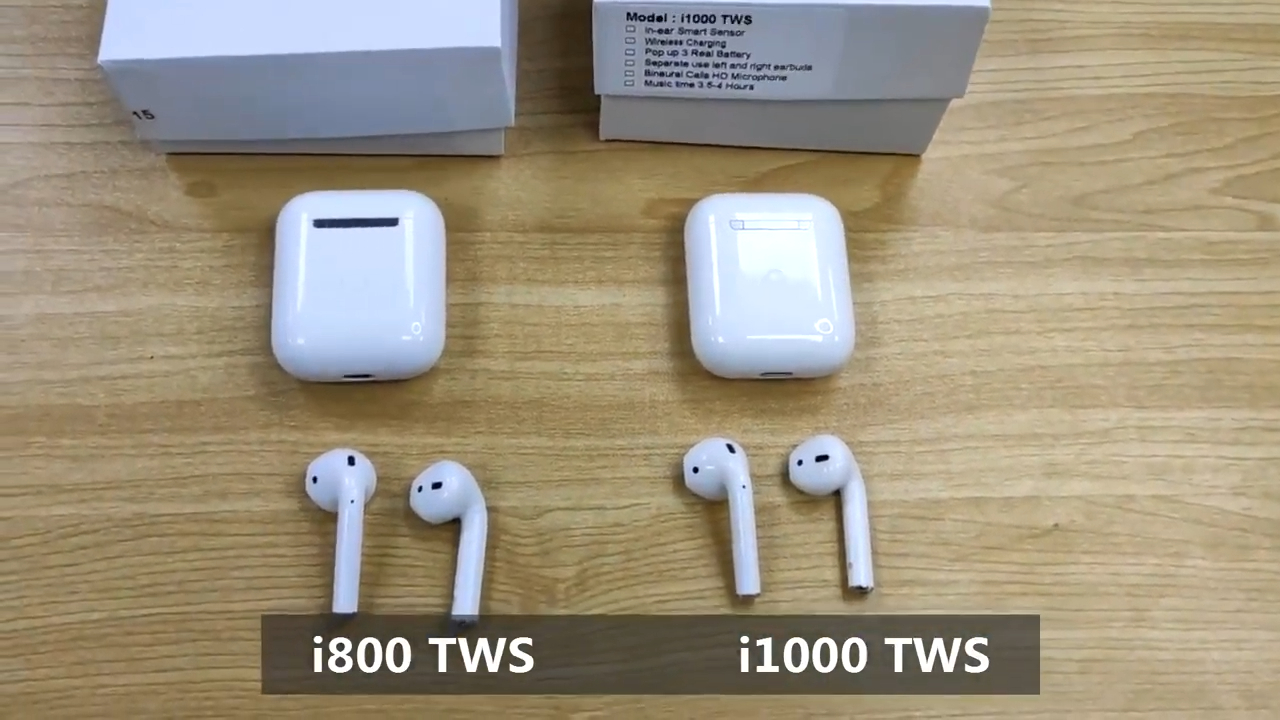 Both these airpods clones are extremely similar to the original, as it is expected, which of course gives them a classy and rather elegant look that is so popular within the airpods / airpods clone market. Stating a winner here would be nearly impossible for two main reasons, first when it comes to the looks, it is really a personal preference and second, they both look just as beautiful.

Both airpods have a rather long-lasting battery, lasting between 3 to 4 hours and not needing much time to be charged back to a 100%, actually, they can be charged back in less than 2 hours! They were charged way faster than I had expected, and they did so, wirelessly! It was a pretty good experience and that makes them both worth buying if you don’t like waiting for a long period of time to listen to your favorite songs again. 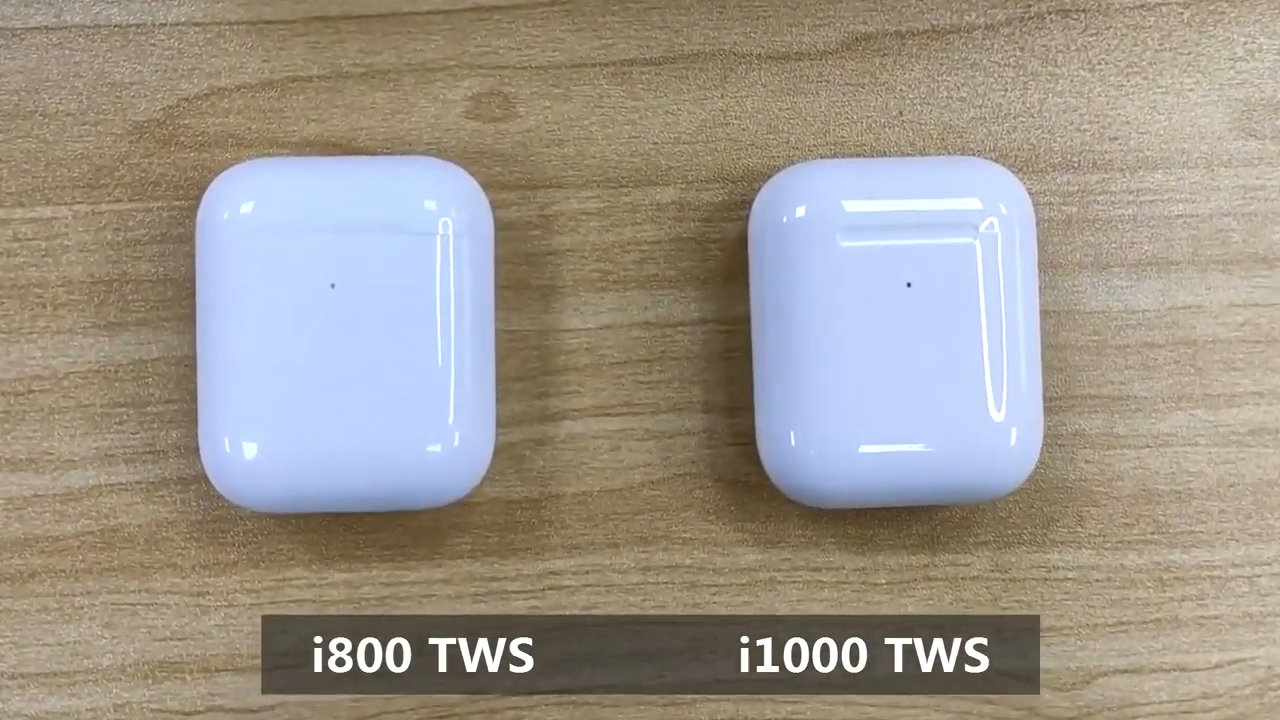 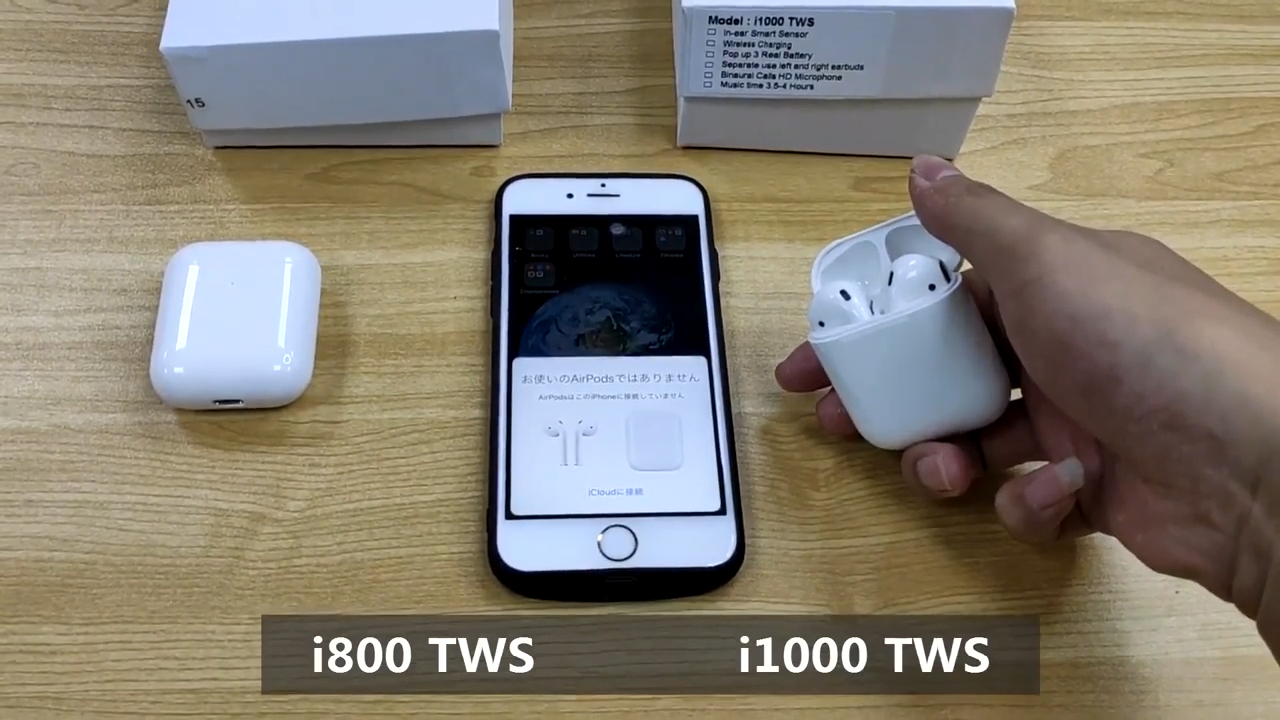 It is true that most people will have their phone or other devices close to them while listening to music or watching a video, the fact that you don’t have to have your device on you at all times while listening to your songs or podcasts, is really great, you can just walk around your house while your phone is charging and still listen to your music. 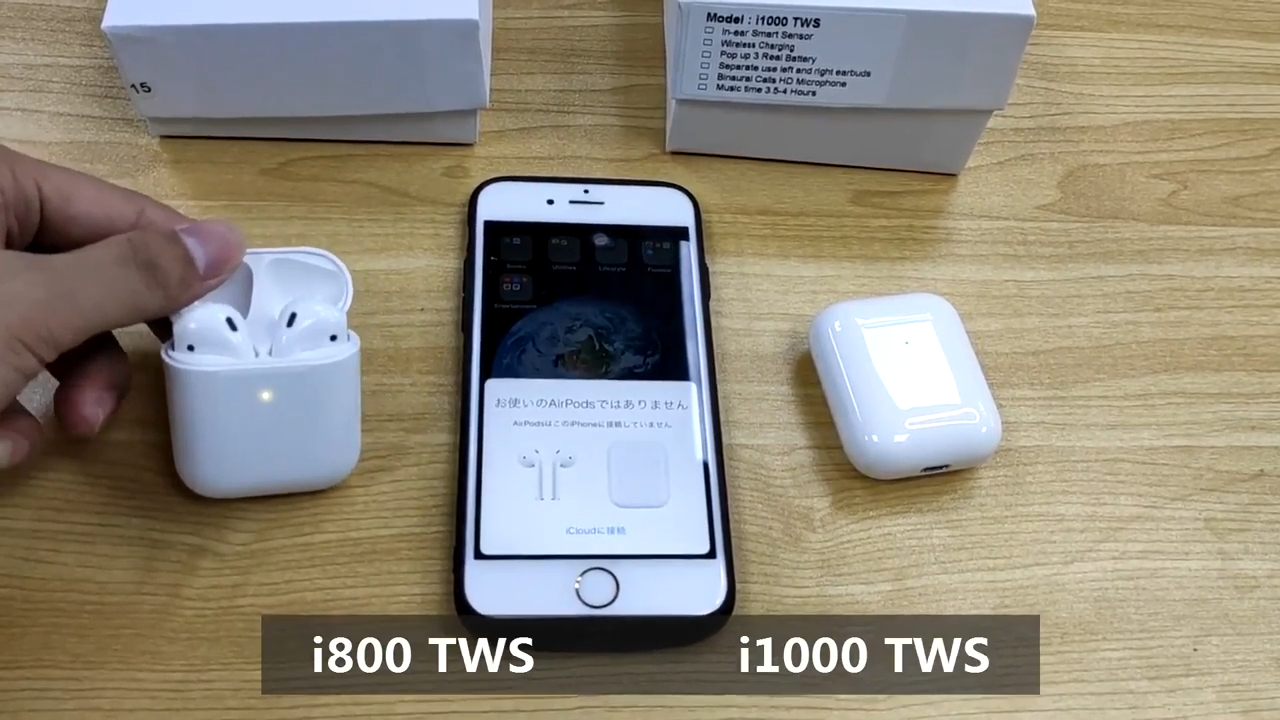 Here, again, the i1000 TWS takes the price as I was able to walk around my department freely without the music fading in the slightest or having any other complications, of course, I don’t mean to say I had any kind of problems with the i800 TWS but in range of the Bluetooth alone, the i100 TWS is the winner.

They are both really cheap considering just how good they are, standing at less than $30 each. Surprisingly, i800 appears to be more expensive than i1000 TWS because of the popularity, in most stores. The price difference was of $5 to $8 USD.

Conclusion – Which one wins:

While it does come to personal preference, it is clear than the i800 TWS is outclassed by the i1000 TWS in next to everything. But in all honesty, you can’t go wrong with either as they both will give you a relaxing experience when listening to music.

Here’s the link to the store to buy both Apple Airpods 2 Replicas: