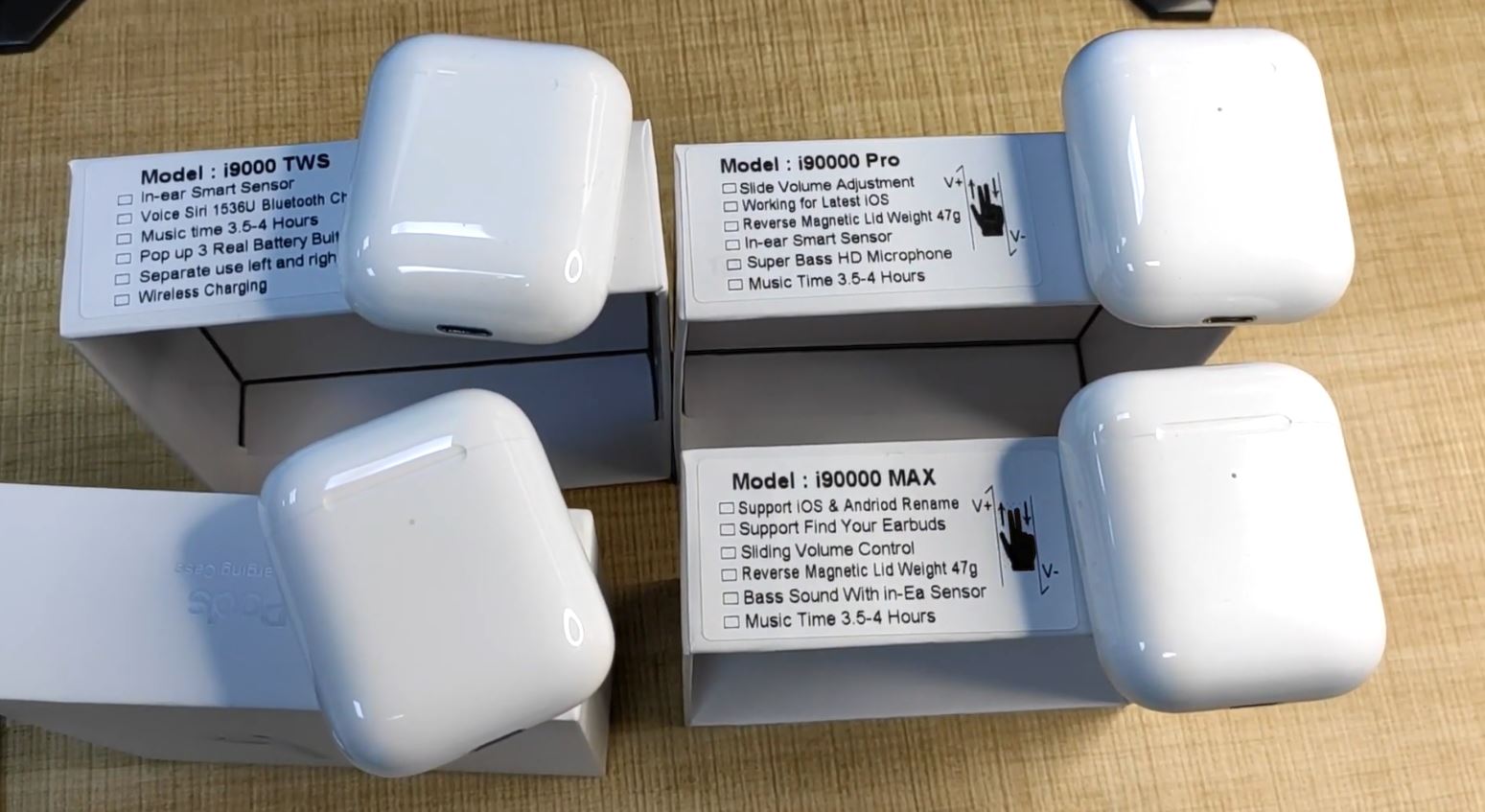 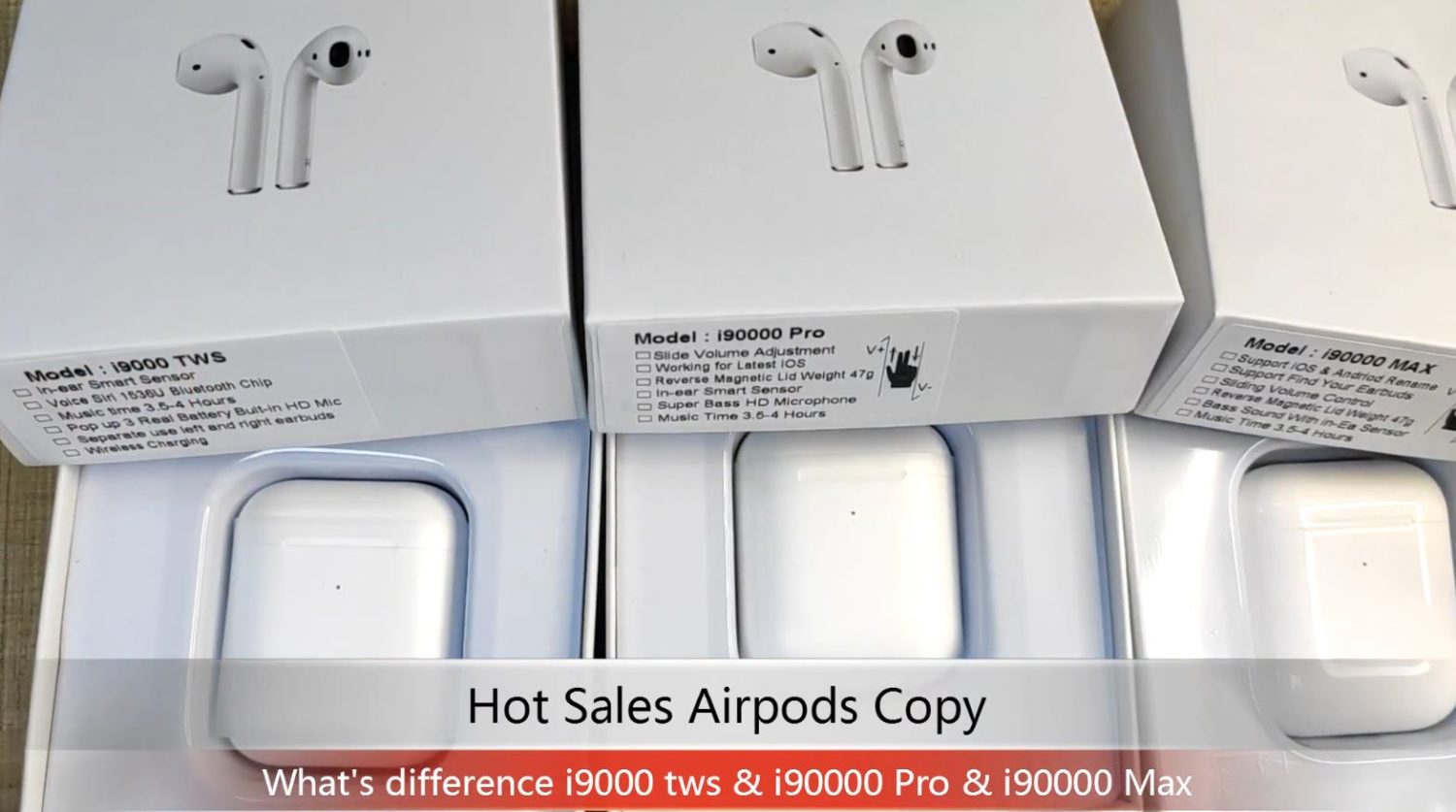 Guide On Selecting the Chinese Fake AirPods i Tws Models

Before starting the comparison, we want to clear out something. There are hundreds of fake AirPods mostly the Chinese one with the name ‘i TWS’ in the market. Selecting one from the sea of hundreds is quite difficult. So here is what you need to see.

We hope that it’s all clear about buying i TWS earphones. If you have any questions, hit the comment section down below.

We will be starting the i9000 TWS vs i90000 Pro vs i90000 Max vs Apple AirPods 2 comparison review, with the specs comparison just to get a quick idea about the differences.

The boxing appears to be the same for all four Airpods including the original one. However, we do see the product name and specs for the fake ones printed on the side of the box. 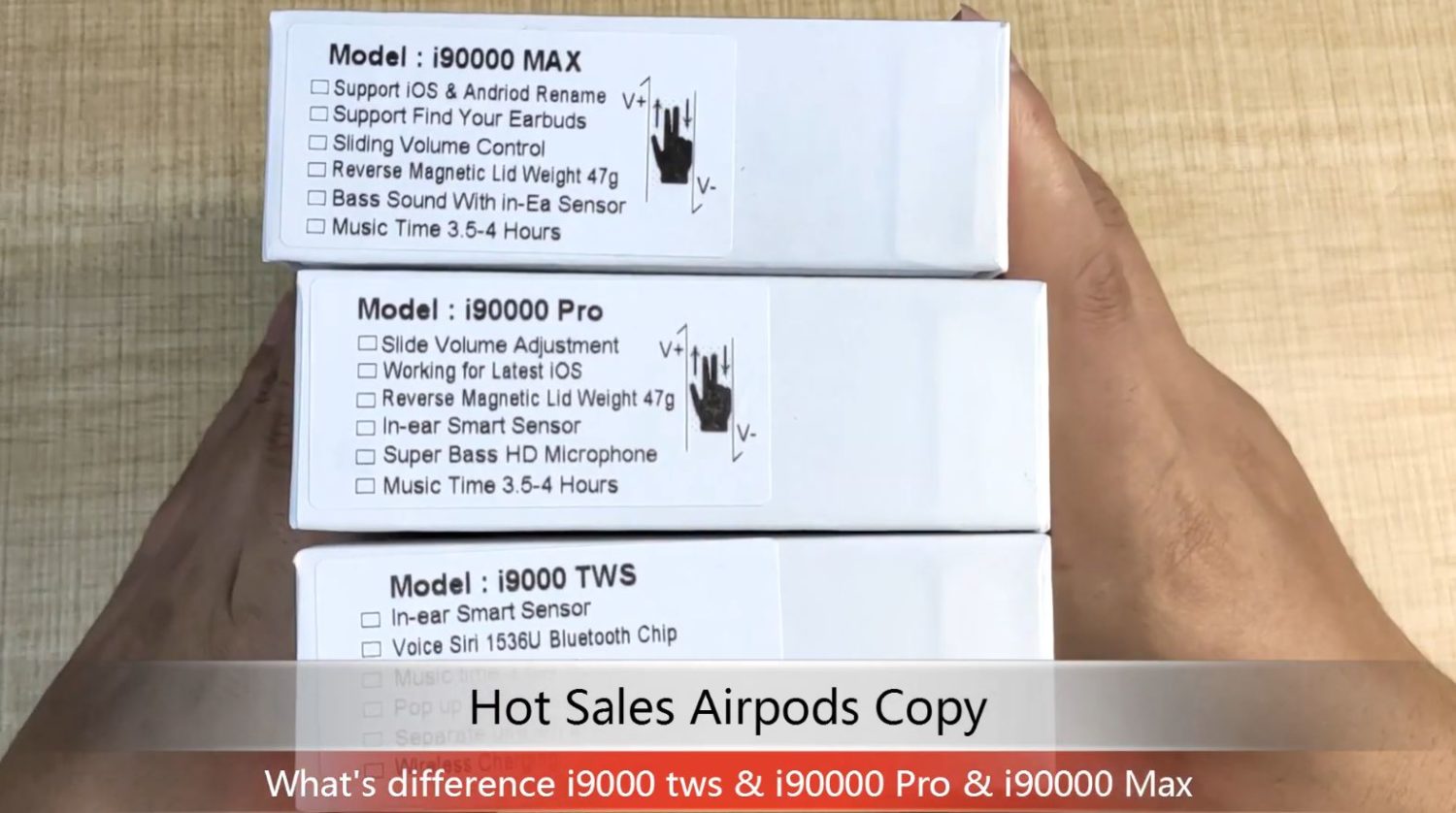 All three of the fake AirPods are 1:1 replicas of the Air 2 (in terms of size) and appearance. There’s a slight difference in the color (the original has a bit soft white color shade like off white, but the fake ones have sharp white color).

Moreover, two more differences we can see are on the charging case. Firstly, there’s no laser engraving text (Designed by Apple in California Assembled in China) on the top back of the case on the fake ones. Only i500 TWS has it. Second is that the case is all plastic with no metal clamp, so you might have to carefully open the lid every time.

Apart from this, everything is the same including the stalk, the earpiece, and even the bottom of the stalk which has a net on it.

First of all, the original AirPod 2 has the iconic pop-up animation which appears after opening the lid. The animation displays the button press scene, percentage battery of the case and AirPods, and percentage battery of AirPods separately and collectively when taken out in different animations. Moreover, it also has the dedicated setting page where you can turn on/off in-ear detection, assign different functions to the left and right earbud, rename, GPS, and so on. There’s also the pressure touch control for the original AirPods which can play/pause, next/previous, tap for Siri call, and slide to control volume. Other features include Qi Wireless Charging, GPS, and transparency. Last but not least, we have the incredible sound of the original AirPods.

As for the pop-up animation, all three have the same animation supported on iOS 13.2 and above. i90000 max has the most responsive animation among all three, close to that of the original. Though there’s still a slight delay which is fine for the given price. Since it’s an iOS feature only, Android OS doesn’t have that animation. However, the name’s of the fake AirPods will be different when you pair them for the first time. You can rename i90000 Max only since it’s the only one here that has the dedicated settings page in the Bluetooth section. For the rest of the two, you will have to live up with the default names i9000 and i90000 Pro. We don’t know why but it looks like Swzyor has written that i90000 Pro supports the rename feature, but that’s not true.

As for the in-ear detection, all three of them support it, however only i90000 Max TWS has the feature to turn the function on/off in the settings page, while that’s not possible for the rest of the two since there’s no setting page.

All three of them have the touch control which can play/pause, next/previous, tap for Siri call. However, only i90000 Max has the feature of volume control via sliding. There’s a slight difference in the touch compared to the original Apple AirPods air 2, this is because the fake ones don’t have a pressure touch to them. It can be found in the later versions of the Chinese Fake AirPods as well as the i90000 Max. 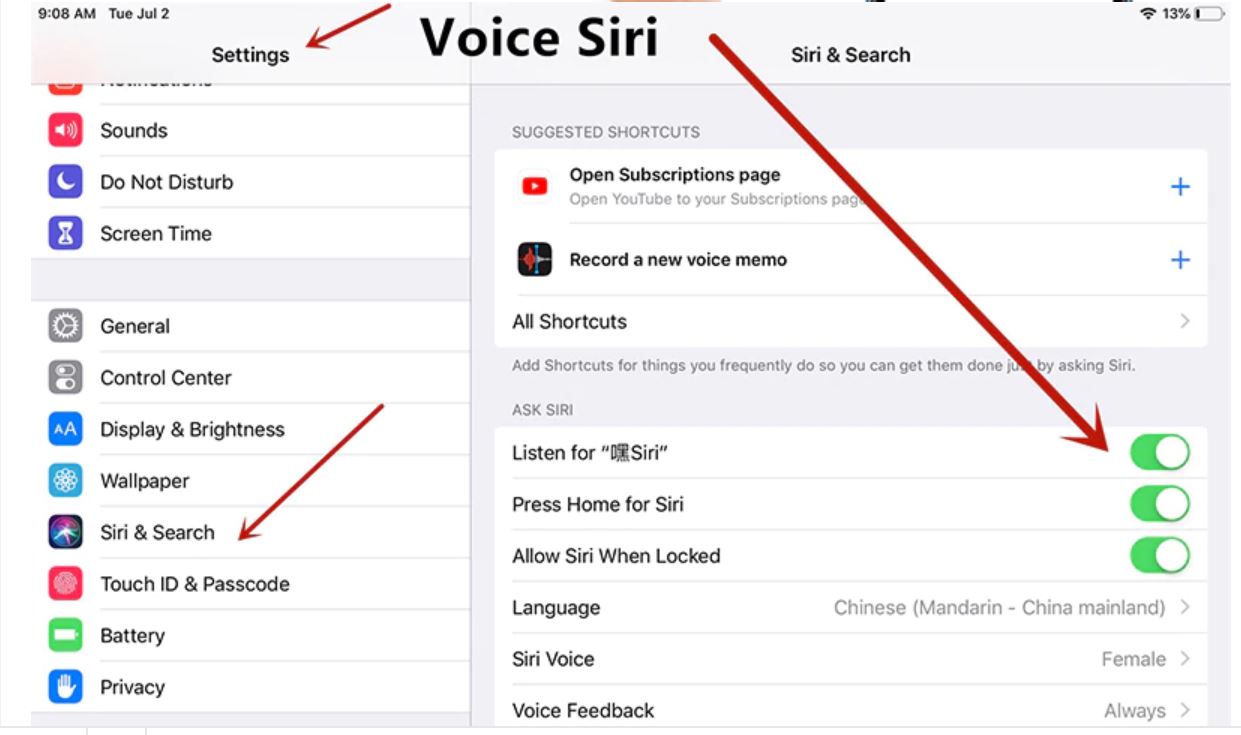 All three of the fake AirPods have Bluetooth 5.0 modules and the range is 10 meters.

Apart from this, the Airoha 1536U AP2 audio chip is present on them. It does support GPS but not audio sharing. Moreover, it doesn’t have a volume lock as well. So, these downsides are to be found on all fake AirPods using this audio chip. The AP2 version has HD mic and sound. However, the sound quality of the 1536 is slightly better.

The sound quality seems to be improving slightly after each new model. The same is the case with these three. All three of them have a nice bass added to it, however, the details and the quality seems to be excellent in i90000 Max, then we have i90000 Pro and at last i9000 TWS which also has good sound.

If you are looking for a sound experience similar to the original ones, then we are afraid you might be disappointed, since there’s no ANC feature and the sound can be distorted at maximum volume. Though the volume is very high which is pretty common in Chinese audiophiles.

There’s CVC 6.0 in all three fake AirPods for better calling experience and voice recording. Right now the i200000 Pro provides the best sound which is close to the AirPods series. Here’s the i200000 Pro review.

Ending the i9000 TWS vs i90000 Pro vs i90000 Max vs Apple AirPods 2 Comparison review, we can see how the three of the fake AirPods resembles the original AirPods in terms of appearance, size, and functions. Though some points differentiate the fake ones from the original ones (mentioned in the design & appearance section). Though the original AirPods remains unbeaten but the price is really an issue here. Given that all three of the fake AirPods have almost the same price range, it will be a good option to go for i90000 Max TWS, because of better sound and most importantly the settings menu and Bluetooth rename feature which is exactly like the originals. The price difference between the three fake AirPods isn’t that much.

Sadly, these earphones are not available on Amazon.

Disclaimer: The links given are affiliated ones. If you are looking forward to purchase any of the fake AirPods, please purchase from the link given by us. We might earn a small commission from the purchase which will be beneficial for the maintenance of this site.

We hope that you loved our i9000 TWS vs i90000 Pro vs i90000 Max vs Apple AirPods comparison review. Don’t forget to rate the article. Moreover, if you want to know anything, let us know in the comments.

No, not completely waterproof. Most of them are IPX5 certified which means that they can resist a sustained, low-pressure water jet spray (raining or sweat in common scenarios). You can’t submerge them in water.

Yes, fake AirPods are completely safe to use. The material used is skin-friendly. It doesn’t experience any temperature changes while wearing.

There are hundreds of fake AirPods. Yes, some of them could be bigger than the original AirPods. But try to see the terms '1:1 size replica' or 'super copy' to make sure that they are of the same size.

Are fake AirPods any good?

For a budget-friendly price, they are good. They provide similar features close to the original ones so that everyone can enjoy the magic of having AirPods real or fake.

Are fake AirPods as good as the real ones?

No, not as good as the real ones. The functions and features might be close to the real ones such as pop-up animations, in-ear detection, and GPS. However, the sound quality isn’t nowhere near the original ones.

Can fake AirPods connect to iPhone?

Yes, they can. In fact, phones with iOS 13.2 can show pop-up animation as well as the original.

Can fake AirPods be tracked?

Yes, most of them can be tracked via the GPS feature. However, old models don’t have GPS, so do check if the fake AirPod you are buying have GPS feature.

Yes, they can be connected to Android OS. However, Android OS won’t show the pop-up animation and other features specific to iOS.

Can fake Airpods do live listen?

No, not at all. This feature is exclusive to the original Apple AirPods.

No, not at all. They might be 1:1 replica in size, however, they won’t be able to fit perfectly in the case.

Can fake AirPods connect to Siri?

Yes, they can. In fact, most of them support Hey Siri voice activation as well to turn on Siri voice assistant. Here’s how to do for the above mentioned fake AirPods

Yes, they do work. Though there are some poor quality AirPods which can stop working after a few days of use. Try buying the famous fake AirPods such as the i TWS ones, Karabale, or Swzyor.

Do fake AirPods have a light on the front?

Yes, they do have a light in front of the charging case. It’s a multi-colored LED light (white, green, and red) that shows the status of the fake AirPods (charging, battery low, pairing mode).

i9000 TWS vs i90000 Pro vs i90000 Max vs Apple AirPods 2 Comparison Review
Summary
i90000 Max is the most superior among the three fake AirPods, thanks to the settings menu, rename feature, similar to the original.
Reader Rating3 Votes
8.5
i90000 Max Over i9000 and i90000 Pro
Rename Feature
Bluetooth Dedicated Settings Menu
Faster Pop-up animation
Better sound
Original AirPods over i90000 Max
Way superior sound
ANC
Superior H1 chip (Audio sharing, volume lock)
10
Total Rating
Start typing to see results or hit ESC to close
Xiaomi Huawei OnePlus MediaTek MIUI
See all results 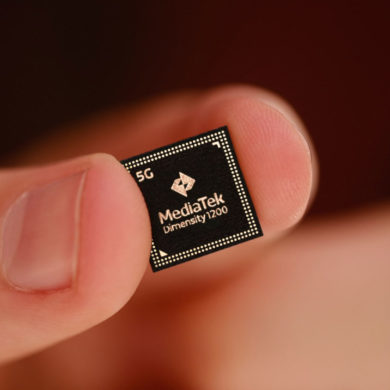