The celebrations of October 31st have not stopped the technology world. And is that today has appeared nothing more and nothing less than a new Lenovo device on the Internet. The Lenovo Z5 Pro L78031 AnTuTu Benchmark has been revealed, and a new participation of the company is expected in the Smartphones market.

The new Lenovo Z5 Pro is the brand latest market introduction and a Smartphone that sounds like an old acquaintance that came out recently. The first thing is the use of a new AMOLED screen with a 2340x1080p resolution and an aspect ratio that reaches 19.5:9. At the processing level, the terminal has a Snapdragon 710 processor and 6GB of RAM + 128GB of ROM. While this results in not the most leading terminal in performance, the combination does not disappoint. The cameras section is also well resolved, having a front 16MP sensor that is hidden behind a sliding design, and a rear configuration of double cameras of 24.0MP + 16.0MP.

Finally, what interests us. The Lenovo Z5 Pro L78031 AnTuTu Benchmark score. The Smartphone has thrown an amazing 161,428 performance points. 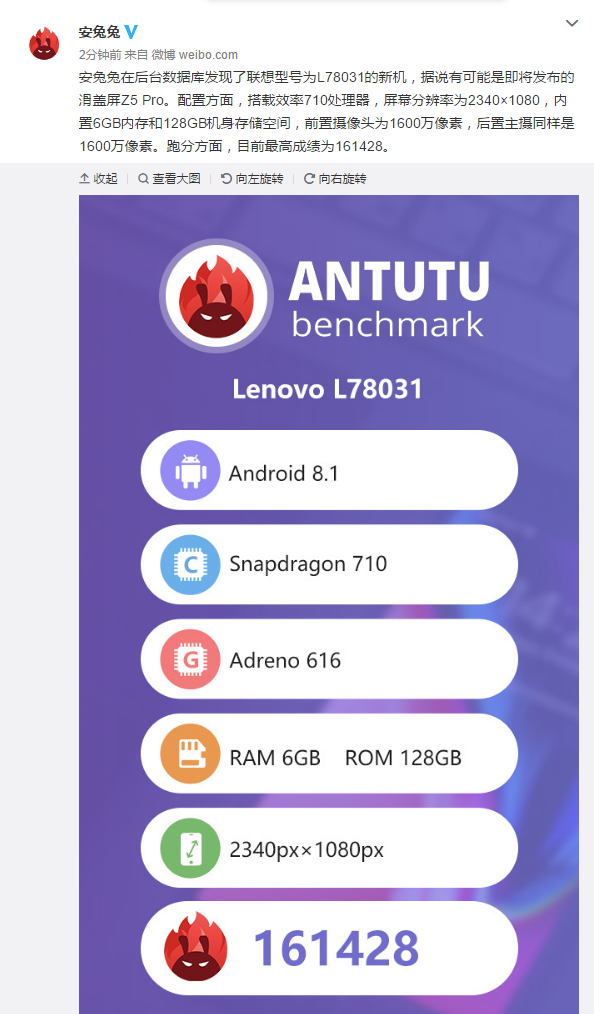 As we mentioned previously, the features of this Smartphone sound familiar to those of an old acquaintance, which is nothing more than the Xiaomi Mi MIX 3 with its sliding design and its screen that reaches almost 100% of the front. In fact, its similarity is obvious even when viewing the different promotional posters about the Lenovo Z5 Pro presentation, which is scheduled for November 1.

Huawei Leads Foldable Phone Market In China With A 53% Share

As if these characteristics were not enough similarities, the Lenovo Z5 Pro implements the new technology of fingerprint scanning on the screen, which, while it is a technology that is gradually becoming the standard of the high-end, is curious the bet on a sliding design similar to that of Mi MIX 3. The vice president of the Lenovo group, Chang Cheng, is quite positive about this terminal and lets us glimpse that we will find the best fingerprint scanner on the screen of a Smartphone that the world has seen.

Finally, the Lenovo Z5 Pro is equipped with a system of double bolt guide with six positions, which they claim is much more reliable than the magnetic system implemented in the Xiaomi Mi MIX 3.