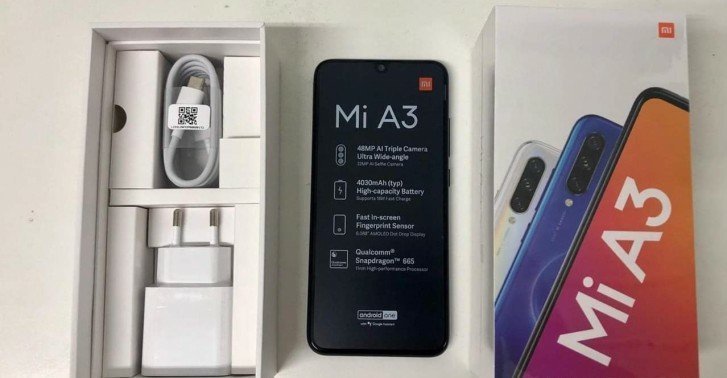 Recently, Xiaomi officially announced that the A3 series is about to debut. Yesterday, GSMArena got tipped with the live images and boxing of the Xiaomi Mi A3.

From the boxing images, Xiaomi Mi A3 uses a waterdrop screen design. The primary camera is 48 MP with triple camera configuration. There’s a large 4030mAh battery under the hood, along with on-screen fingerprint reader and Snapdragon 665 processor, similar to what the previous leak exposed.

Previously, some people reported that Xiaomi Mi A3 is an international version of Xiaomi CC9. The phone also uses a waterdrop screen, and triple rear cameras and on-screen fingerprint recognition. It provides three colors of blue, gray and white. The colors are named Deep Blue Planet, Dark Night Prince and White Lovers.

In addition, the Xiaomi Mi A3 rear lens is composed of 48MP + 8MP super wide-angle + 2MP depth of field triple camera, supporting AI scene recognition. The front lens is 32 MP, which is by far the most powerful camera of the Xiaomi A-Series phones.

The breaking news also revealed that Xiaomi Mi A3 will be launched in Germany in the next few weeks, with the pre-installed Google Android P system, and will be upgraded to Android Q soon.