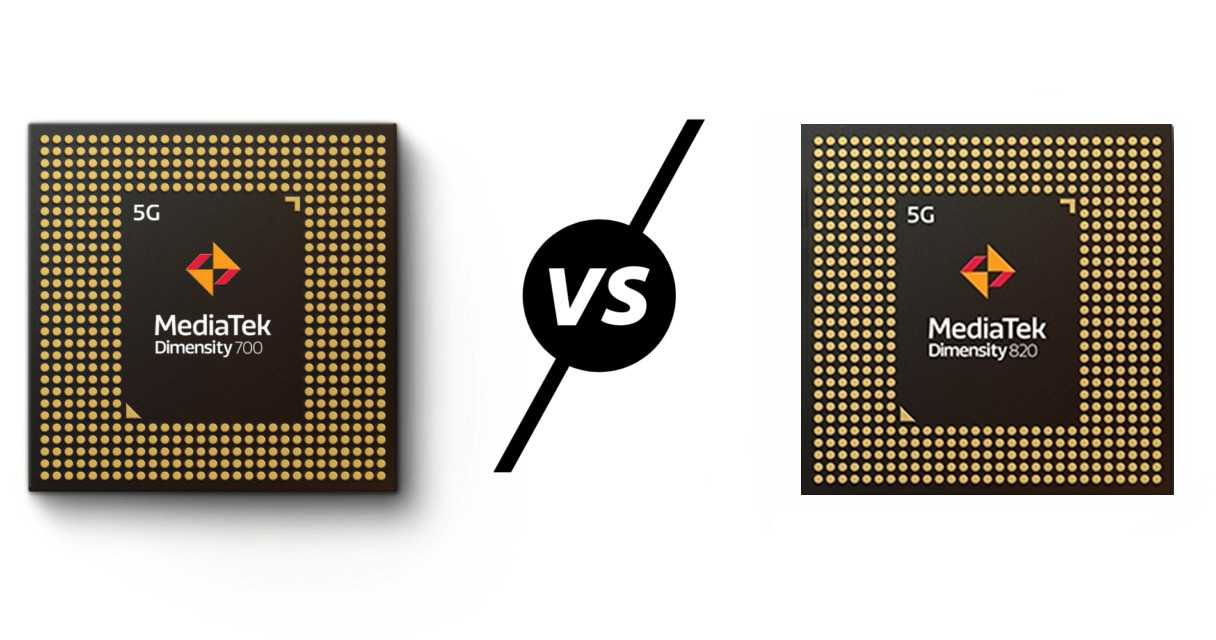 With the arrival of 2020, the war to dominate the 5G technology sector is growing stronger, so mobile processor manufacturing companies such as MediaTek have not only connected to 5G technology but also more strong than ever. This company gave us two amazing processors, the Dimensity 700 and the Dimensity 820, and today we will compare them in this new MediaTek Dimensity 700 vs 820 comparison!

MediaTek Dimensity 700 vs 820 – All The Differences You Need To Know!

About release dates, it is obvious that the Dimensity 700 has a great advantage over the Dimensity 820. This processor was shown to the world a very very short time ago, since it was just a couple of days ago, on November 10, 2020. Having said that, and although the Dimensity 820 was not presented long ago, it does have time hanging around the market, since it was presented at the beginning of the year, on May 18, 2020.

Getting to talk about the CPU inside these processors, both have a dual-cluster, octa-core design CPU, which is distributed as follows (2 + 6) in the MediaTek Dimensity 700:

On the other hand, and although it was mentioned that the MediaTek Dimensity 820 has the same design, it is distributed in a slightly different way (4+4), and it is as follows:

Now, having seen the CPUs that these two processors bring, and while it can be said that this could be a tie, the very small advantage in the number of the high-performance cores in the Dimensity 820 plus their speed gives this processor first place in this category.

Turning to talk about the GPUs that are inside these two powerful processors, the Dimensity 700 features a 2 core Arm Mali-G57 MC2 as the GPU running with a frequency of @950MHz. On the other hand, in terms of GPU performance, the Dimensity 820 uses the Arm Mali-G57 MC5 running with a frequency of @650MHz, a five-core variant of the Mali-G57, which was announced in October.

While the GPU inside the Dimensity 820 runs at a lower speed, the fact that it has three extra cores gives it greater operating power, which allows it to provide more power to the devices it is on.

Related to Artificial Intelligence, Dimensity 700 doesn’t have the iconic APU 3.0 as found in Dimensity 1000 series. Instead, in the 700 version, we see an AI accelerator that provides AI capabilities but at a very basic level. With that being said, Dimensity 820 comes with the APU 3.0 (AI Processing Unit) presented by MediaTek that has four cores consisting of three different core types which provide up to 2.4 TOPS of AI performance. Furthermore, the APU HW design is also said to be more efficient and more powerful to enable more accurate AI camera results.

On the other hand, the Dimensity 820 does support 5G networking and features global sub-6GHz 5G networks and promises up to 3.5Gbps download speeds and up to 1.25Gbps upload speed. It also supports dual SIM 5G. MediaTek 5G UltraSave technology achieves excellent power efficiency. Sadly, there is no support for mmWave 5G.

Finally, to see what is the best option among these processors at the budget level, we have to know the price of the phones they are on. Dimensity 820 is expected to be seen in the Redmi 10X, and although this has not yet been released, it is thought that it will have a price of about 212 USD. On the other hand, and knowing that the Dimensity 700 is just a decreased version of the Dimensity 720, that is inside of phones with prices around the 273 USD, a Dimensity 700 5G phone will range from as low as 180 USD to as high as 250 USD.

Winner: Tie (depending on the price of the phones with Dimensity 700 and the real price that the Redmi 10X will have)

Select MediaTek Dimensity 820 if you want:

I hope you loved this MediaTek Dimensity 700 vs 820 comparison. Which one is your favorite SoC? Let us know in the comments.