Snapdragon 732G process is 8nm LPP FinFET developed by Samsung. It is the same as Snapdrgon 720G and Snapdragon 730G.

Comparing the process, Snapdragon 732G has a much better process technology (lower the better) than Helio G95. This makes Snapdragon 732G to be more energy efficient, retaining better performance over time, with lesser heat dissipation over time when compared to Helio G95.

Both SoCs have a similar octa-core, dual-cluster layout consisting of 2 high end cores and 6 low end cores. To be specific:

Snapdragon 732G will have an incredible CPU performance here, especially in terms of single core performance because of the 2.3GHz frequency of the two high cores.  Eventhough, Helio G95 as better (0.2GHz) frequency in the six low power cores, the process difference will come in action here. SD 732G will have better performance over time, meanwhile, G95 will struggle a bit with the increasing heat generation.

MediaTek Helio G95 features the same ARM Mali-G76 MC4 (4 cores) as the Helio G90T, however, the frequency has increased to 900MHz which brings 8% increase in graphical performance. Moreover, the SoC also features MediaTek’s HyperEngine Technology for low latency. In fact, MediaTek says that the latency between cocurrent WiFi and LTE triggers is within 13 ms.

SD 732G uses Adreno 618 same as the SD 730G, however, Qualcomm says that it has 15% increase in performance when compared to the old SD 730G. The old frequency of SD 730G was 700MHz, in SD 732G it could be 805MHz eventhough Qualcomm haven’t mentioned it. It’s optimized by Qualcomm Elite Gaming feature and HDR10 capabilities.

Moving to the AI part of this MediaTek Helio G95 vs Snapdragon 720G comparison, Helio G95 has a dual-core MediaTek APU @750MHz and also features AI camera features. It’s ancestor G90T with the same NPU has an AI score of 20.2 on AI benchmark. With the increase in frequency of GPU, the AI score will increase to around 21.0, however, it will still not be able to beat Snapdragon 720G.

Snapdragon 732G uses Hexagon 688 as the DSP which is the same as SD 730G. However, the AI performance of SD 732G will be slightly greater than SD 730G because of the better GPU. On AI benchmark website, Hexagon 688 of SD 730G scores 19.6. With the 15% increase in graphical performance it will reach around 20.9. It will able to beat Helio G90T, but not the new Helio G95. However, the difference isn’t that much. 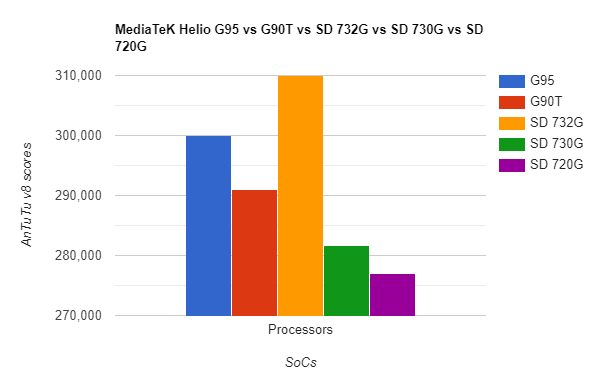 Both SoCs do not support 5G networking.

Helio G95 supports 4G LTE network with Dual 4G standby. 5G is not supported on MediaTek Helio G95. As for the 4G LTE, the maximum download speed is 600 Mbps and upload speed is 150 Mbps. Other connectivity features include WiFi 5 (AC) support and Bluetooth 5.0 module.

SD 732G supports 4G LTE networking but doesn’t support 5G networking. It uses X15 modem and has a download speed of 800 Mbps and upload speed of 150 Mbps. It also has Wi-Fi 6 connectivity, however, the Bluetooth version was increased from 5.0 to 5.1.

Since, Snapdragon 732G has better downloading speed along with the WiFi 6 and Bluetooth 5.1, it’s the winner of this section.

Snapdragon 732G is easy the winner of this section because of better single camera support.

Helio G95 has these features:

Snapdragon 732G features are the following:

However, Snapdragon 732G max RAM capacity is slightly less which is 8GB but the clock speed supported is higher which is 2300MHz.

It’s rare to see a 10GB RAM phone in mid-end category, and 8GB RAM combination with 256GB is mostly used, so Snapdragon 720G is better with higher RAM speed.

In terms of flash memory both SoCs support UFS 2.1 and eMMC 5.1.

At the moment, Helio G95 is only available in Realme 7 which will be debuting on September 7. The expected price of this phone is around $200 to $250.

Right now, Snapdragon 732G is only available in Xiaomi POCO X3 which will release on September 7. The price is expected to be around $275 to $300.

I will select MediaTeK Helio G95 if I want:

I will select Snapdragon 732G if I want:

I hope you loved this MediaTek Helio G95 vs Snapdragon 732G comparison. Which one is your favourite SoC? Do let us know in the comments.