After that OnePlus has officially confirmed the release of OnePlus 5T, the leaks seem to be increasing the anticipation. Canada will take the lead in the release on November 28. Although there are still two weeks left, we have most of the configuration of the flagship leaked. This includes the specs and OnePlus 5T AnTuTu benchmark score as well.

The last leak illustrated a hands-on image of OnePlus 5T showing the ‘About’ section of the phone. According to that leak, OnePlus 5T will integrate a tremendous 6-inch AMOLED screen with an 18: 9 ratio and Full-HD resolution. The 18:9 ratio indicates that it might be a full-screen display. The SoC will be the latest and most powerful Snapdragon 835 coupled with optional 6 / 8GB RAM and 64 / 128GB storage. There will be a 16MP (IMX 398) +20MP (IMX376K dual camera with F /1.7 aperture. Meanwhile, the front camera will be 16MP. The phone will be powered by a 3300 mAh battery. 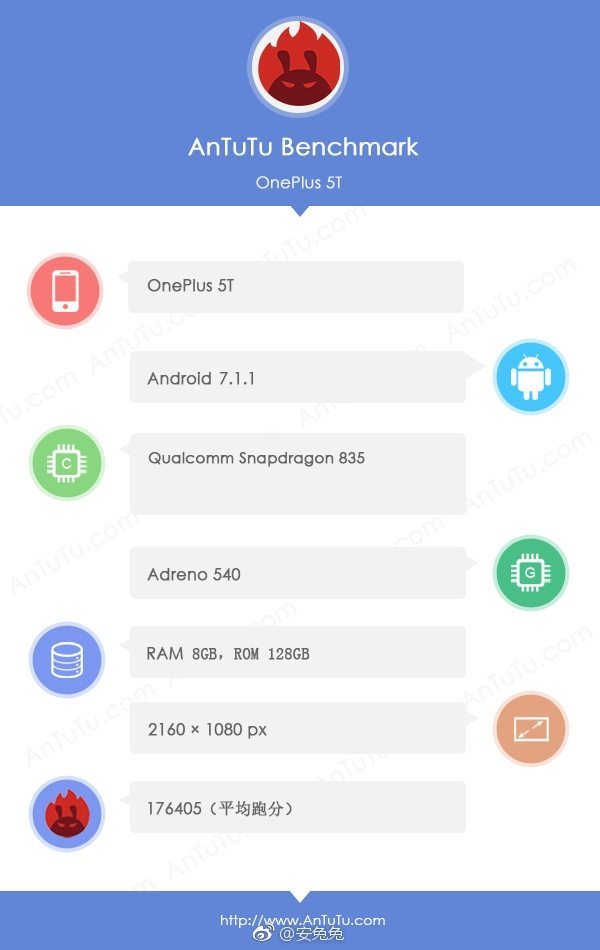 However, the latest leaked AnTuTu specs of OnePlus 5T is almost the same as the previous leak. Only the screen resolution is 2K (2160 x 1080p) instead of Full-HD. Moreover, the flagship still runs on Android 7.1.1.

Coming to the point, with this high-end specs, OnePlus 5T AnTuTu benchmark score is a surprising 176405 points. This is certainly less than the current OnePlus 5 score which is 181047 points. The score must be higher than OnePlus 5 which means that this leaked AnTuTu specs sheet is fake. But a lower score than OnePlus 5 can also be a possibility because the screen resolution is 2K, which we all know can decrease performance as well. If it’s a 2K resolution based points then it’s not bad at all but surprising and the real specs could be similar to that of this leaked AnTuTu configuration

We leave the rest to you. Is it a fake AnTuTu Benchmark specs or not? Comment!