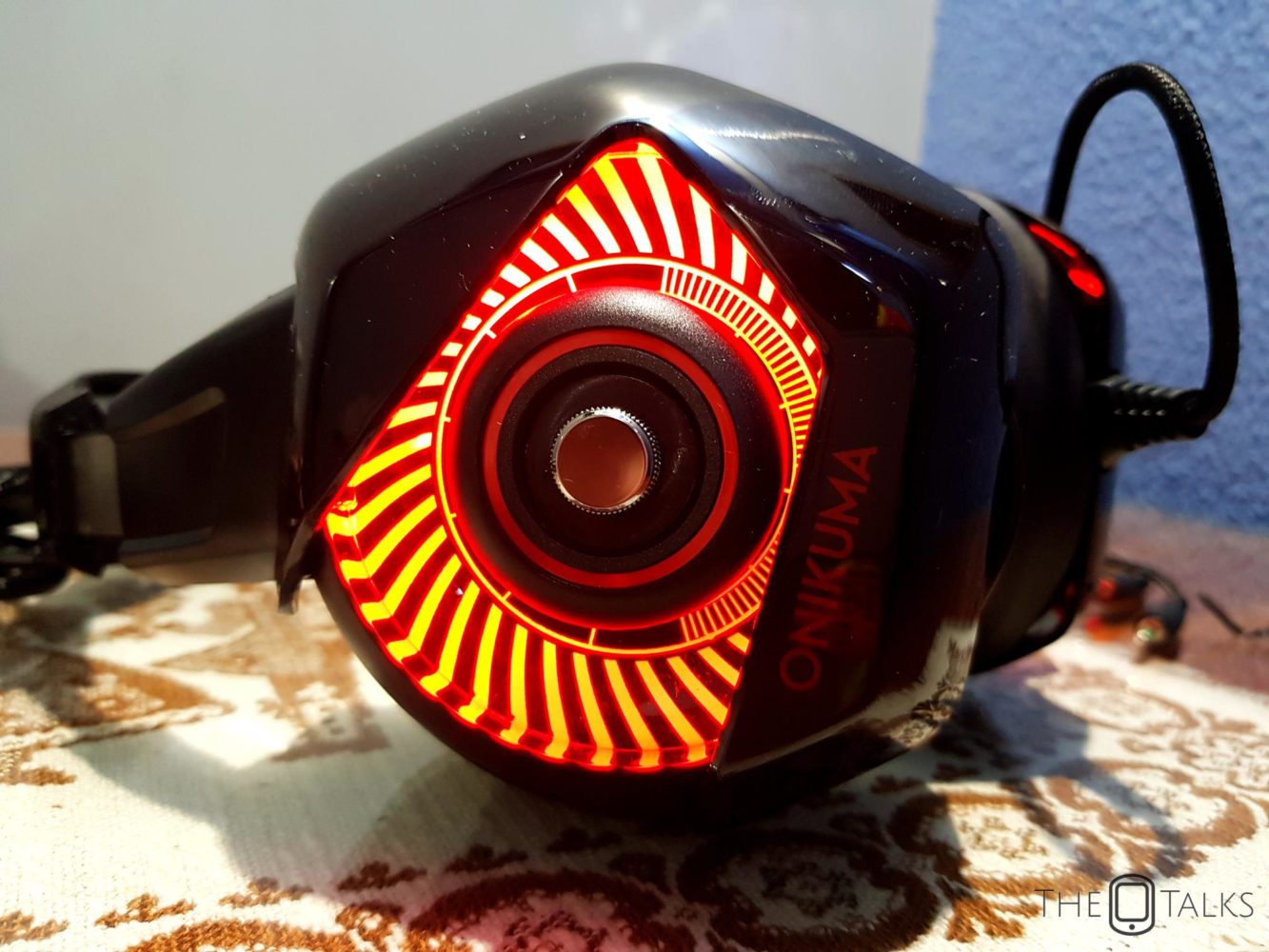 We know the feeling when you get more despite the cheap price tag. Though such gadgets are too rare to see these days. Apart from those crappy ones, there are hidden gems from the Chinese lands, worth of spending a few bucks. Such is the Onikuma K6 Gaming Headset. So what’s so special about this headset. Well, apart from the stupendously low price ($28), the headset serves as one of the most comfortable headphones under the 30 dollars range offering an admirable built and stunning RGB Lighting. 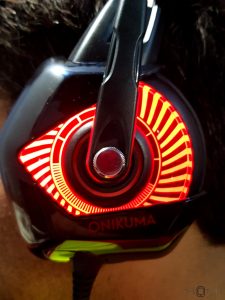 Let’s get into the details and get to know more about this headset in this Onikuma K6 Gaming Headset Review:

Starting with the package, the Onikuma K6 rest inside a black colored box. We should say that the boxing experience isn’t that great as the package itself looks like it was a recycled box with some color streaks when reflected in the light. 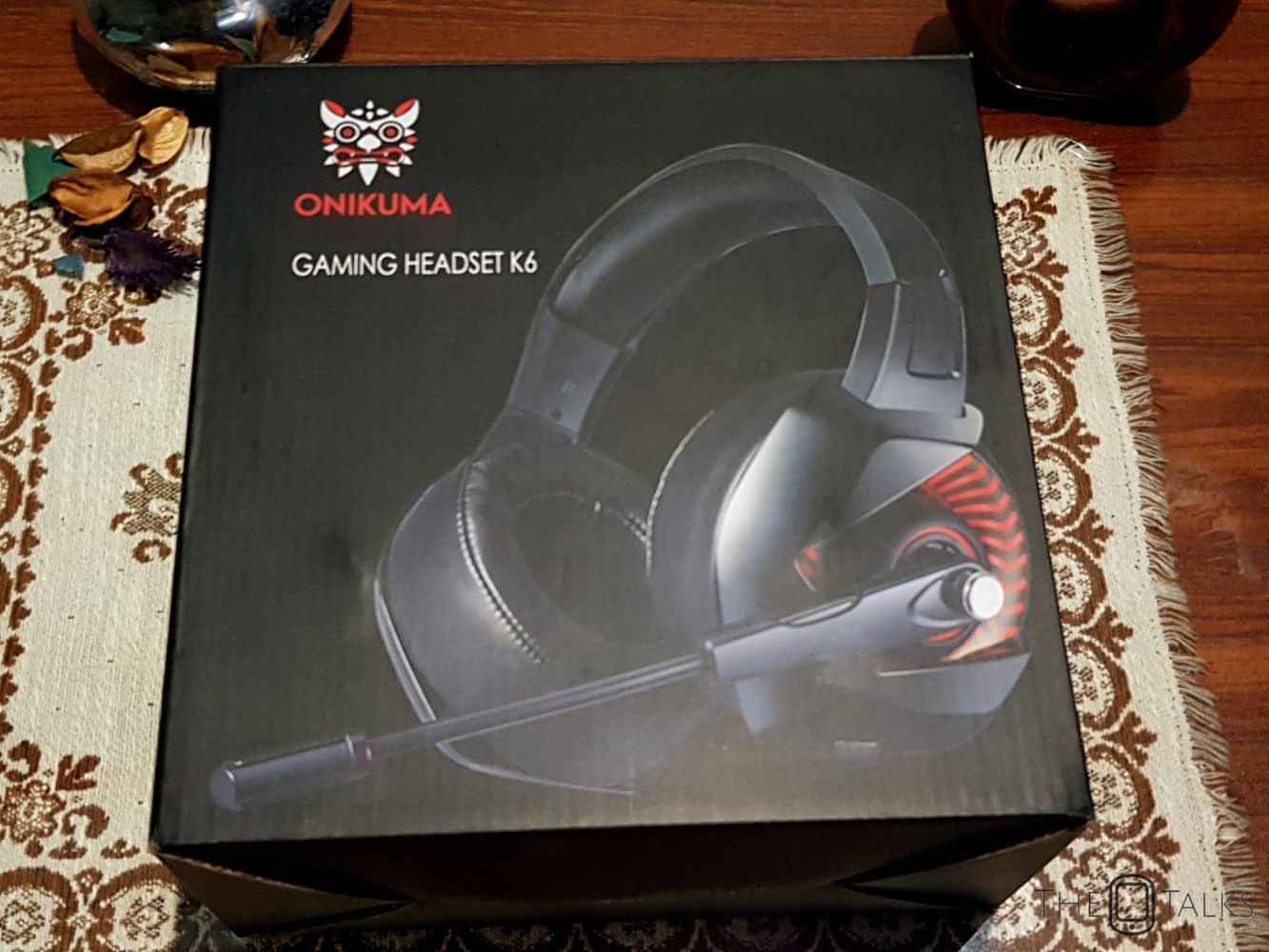 On the front and the back of the box, we have the headphone figure, specifications on the left, and the cables illustration on the left. 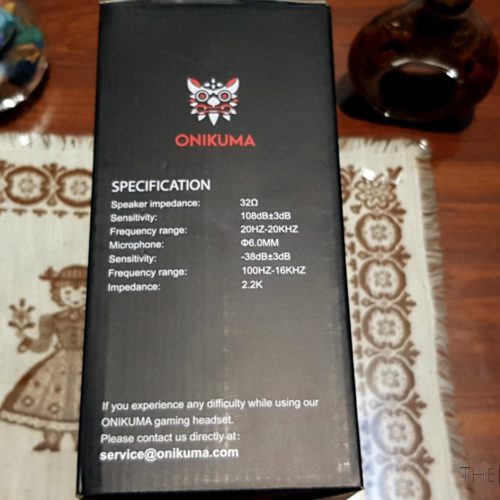 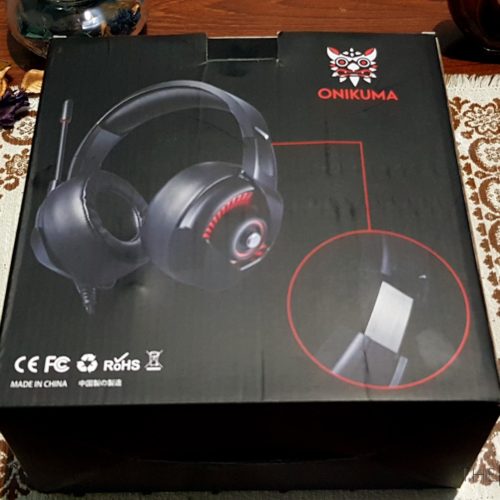 Opening the box, we can see the first impression of the Onikuma K6 gaming headset. The Onikuma K6 embeds inside a black plastic casing and the headband is wrapped as well.

When I first looked at these headphones, I thought that these oversized headphones might be heavy. But they weren’t. You can tell that the finishing is spectacular. The manufacturer was generous as well since we have all the essentials in the boxing including: 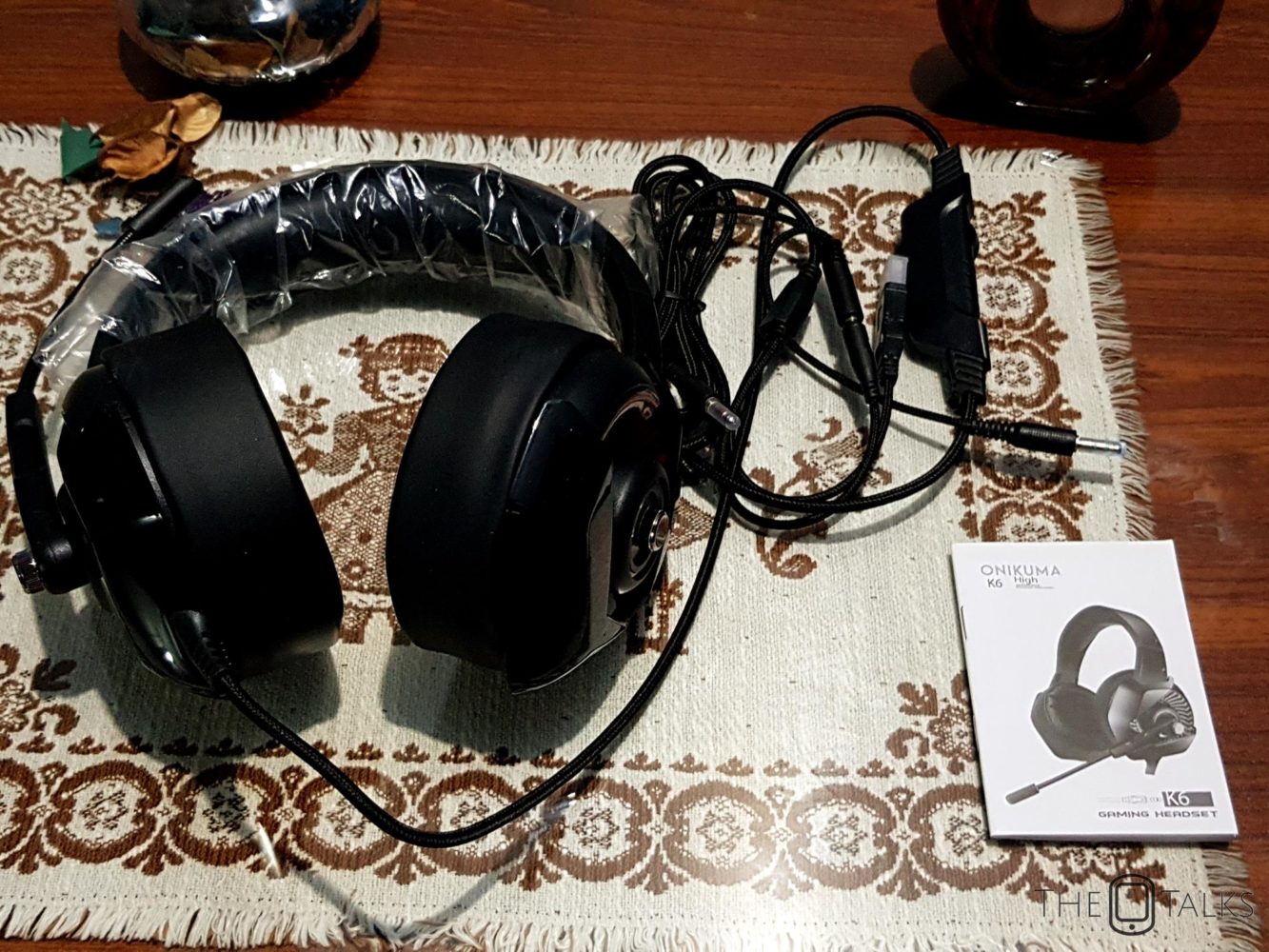 With the two audio plugs given, one can easily connect with the old audio jacks (mic and speakers) or the new hybrid TRRS audio jacks as well.

Looking at the Onikuma K6, these RGB headphones follow the rugged design of the recent gaming headphones. They are big, have oversized cups, and extra padding. The built material is plastic which is not a bad thing because plastic headphones are much lightweight and put lesser stress on the ears and head then the metal ones. Moreover, having a plastic chassis is totally fine as long as the price is under $30, even $50. 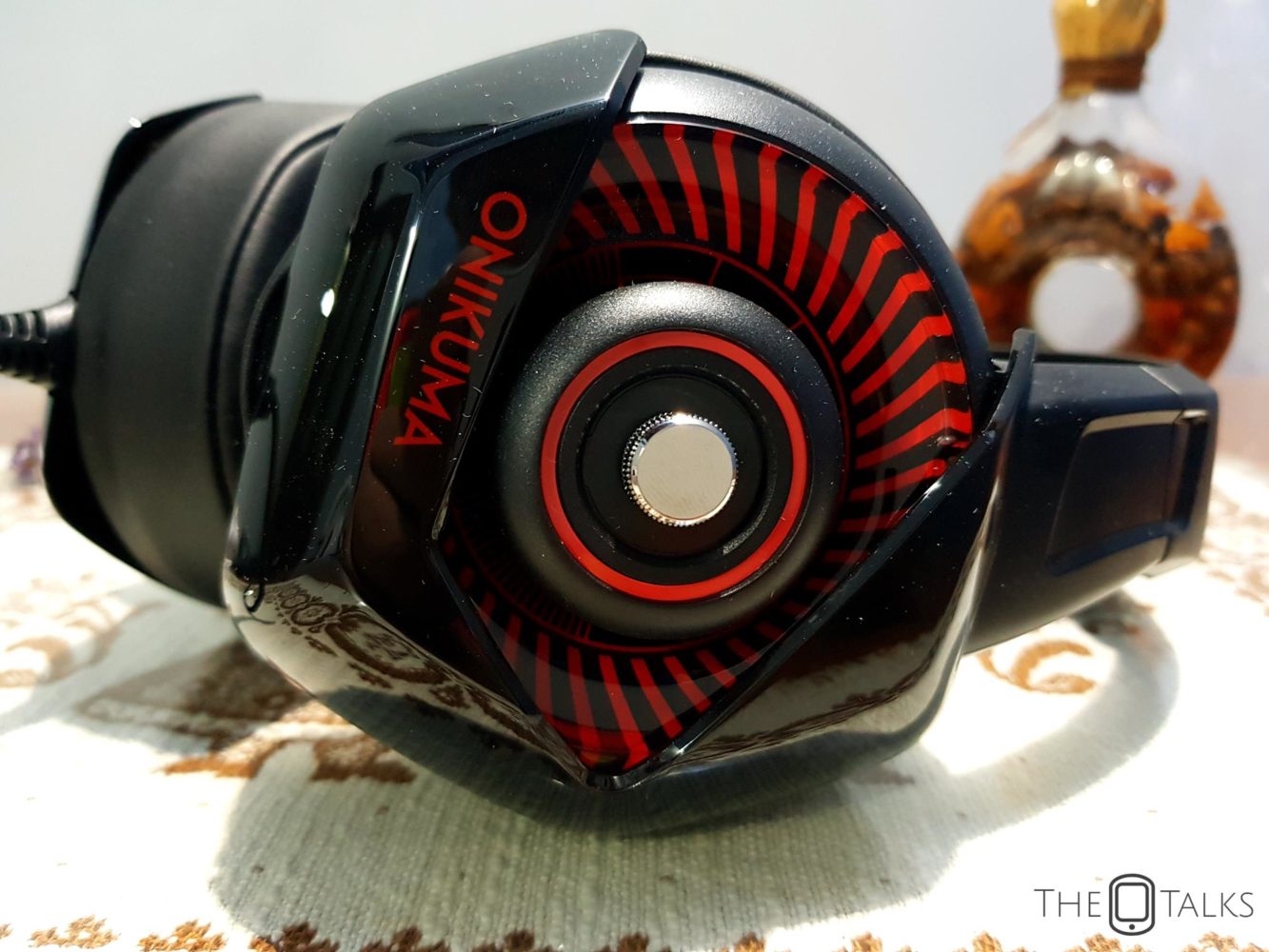 As far as the physical readings are concerned, the headphones occupy a space of 8.6 x 4.2 x 8.9 inches and weigh only 477 grams. The weight is equally distributed on the large frame. Like I previously said, one might get the illusion of heavy headphones just by looking at these headphones, but they are super lightweight considering the size. 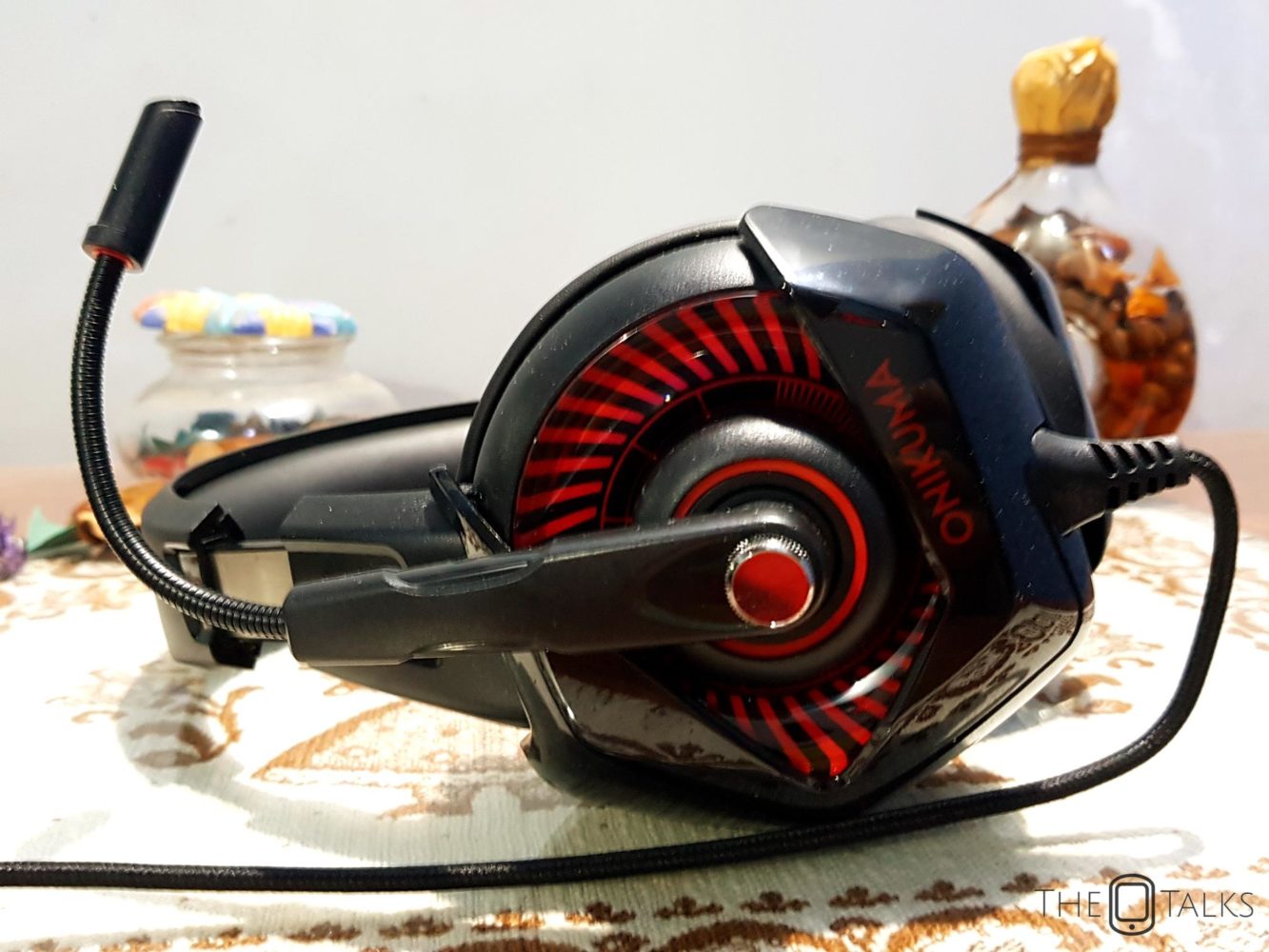 The plastic finishing is smooth while the top band appears to be sandblasted. That’s why it has a shiny surface. To be honest, the extra-padding is what I liked the most in this Onikuma K6 Gaming Headset review. I haven’t seen any headphones under $30 offering that much of cushioning. Both earpieces have more than an inch form pads covered with Velour making it comfortable, soft, and skin-friendly. Furthermore, there’s the padding on the band as well. 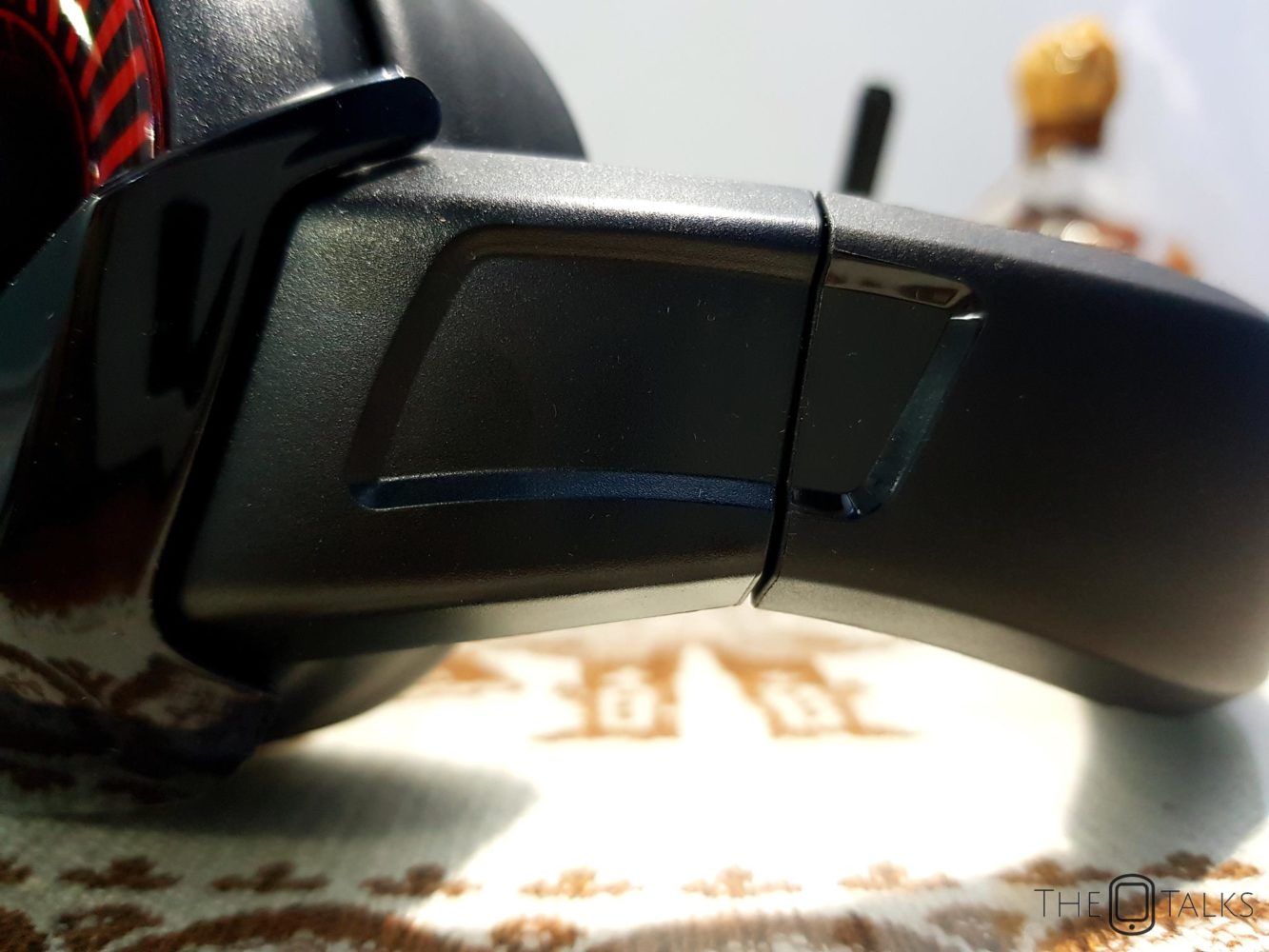 The headphones can be extended about 2 inches (one inch from both sides). The slider isn’t that smooth and you might expect some irritating sound while doing so. However, there’s the comfort that you can see the stainless steel slider in the band which is enough to answer its durability. 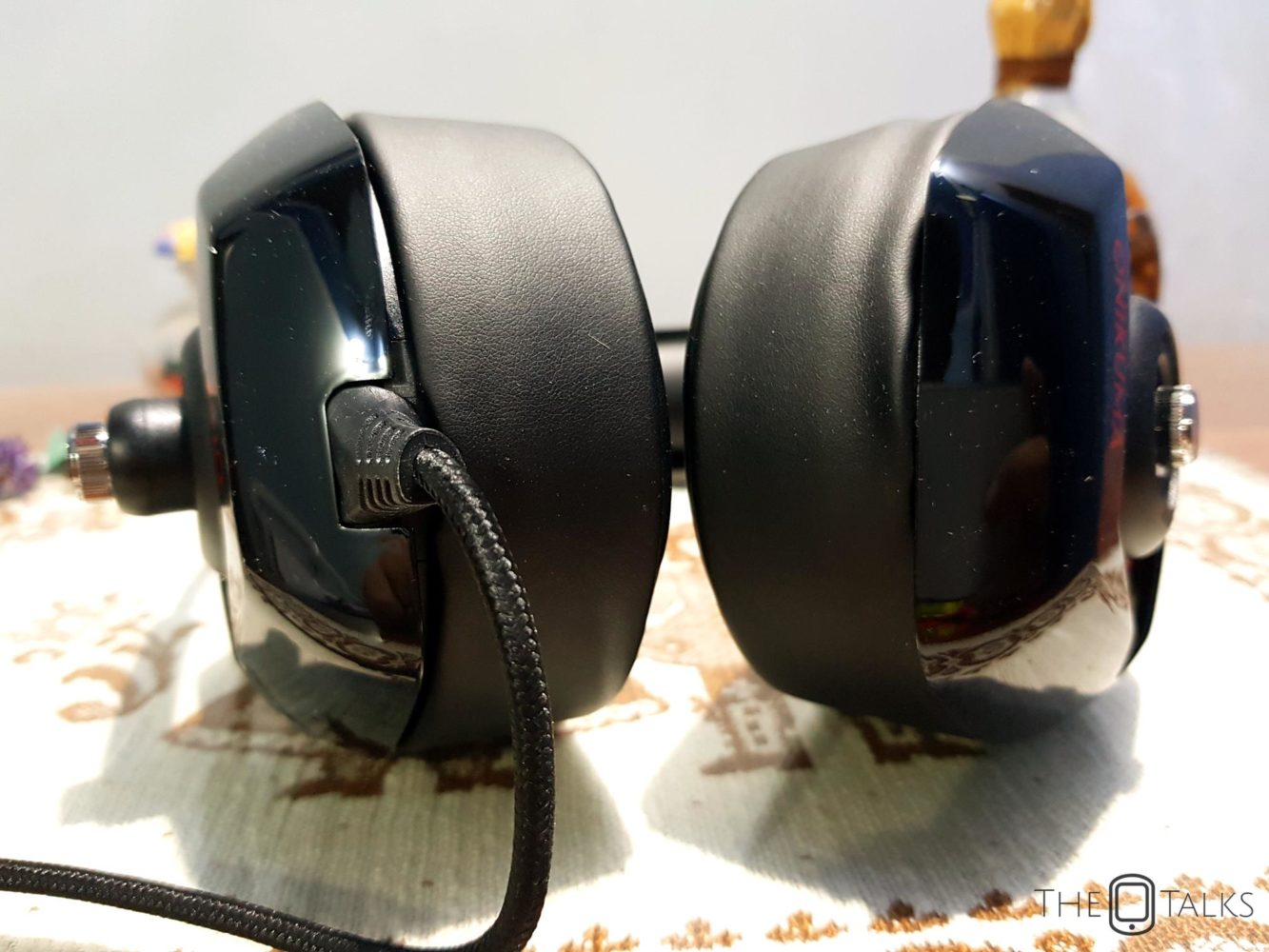 First of all, let me clear one thing. Though we have the coolness of RGB lighting, the color of the RGB LEDs isn’t changeable. If you bought one in red the lighting will remain red, for blue, it will remain blue. This is somewhat disappointing.

However, despite having a single color, those LEDs definitely provides a breathtaking view from such a cheap headphone. The turbine design is impressive, underneath which the RGB LEDs glow.

As previously said, what’s better than providing a lightweight design and extra-padding to a gaming headphone. I have a heart face and was easily able to wear these when extended about an inch. The fitting is perfect, the headphones aren’t either too tight to cause stress or too loose to make that clutter noise in most headphones. 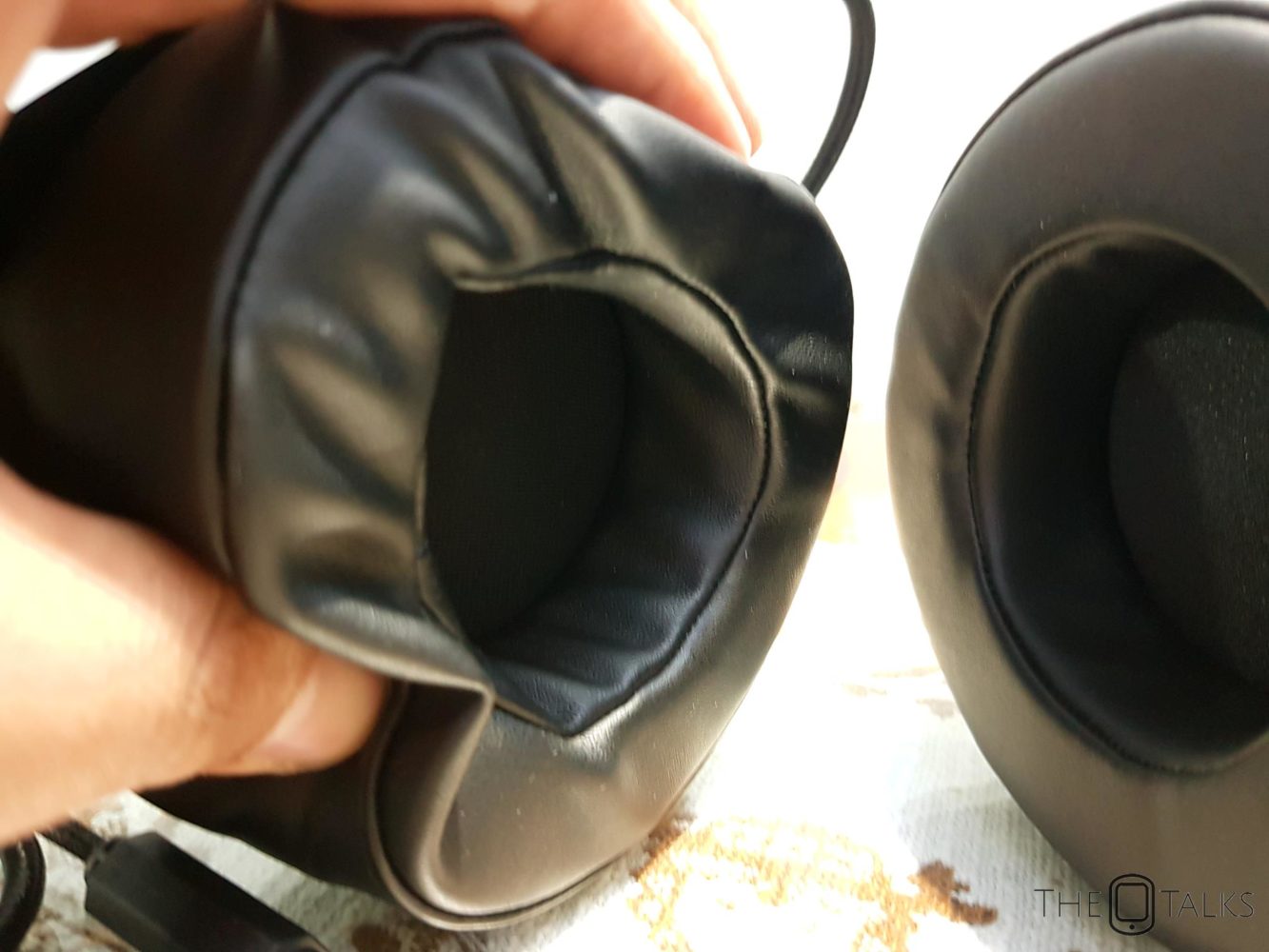 I played PUBG for around two straight hours but didn’t felt any anxiety or stress created from these headphones. My ears were perfect in those pads. 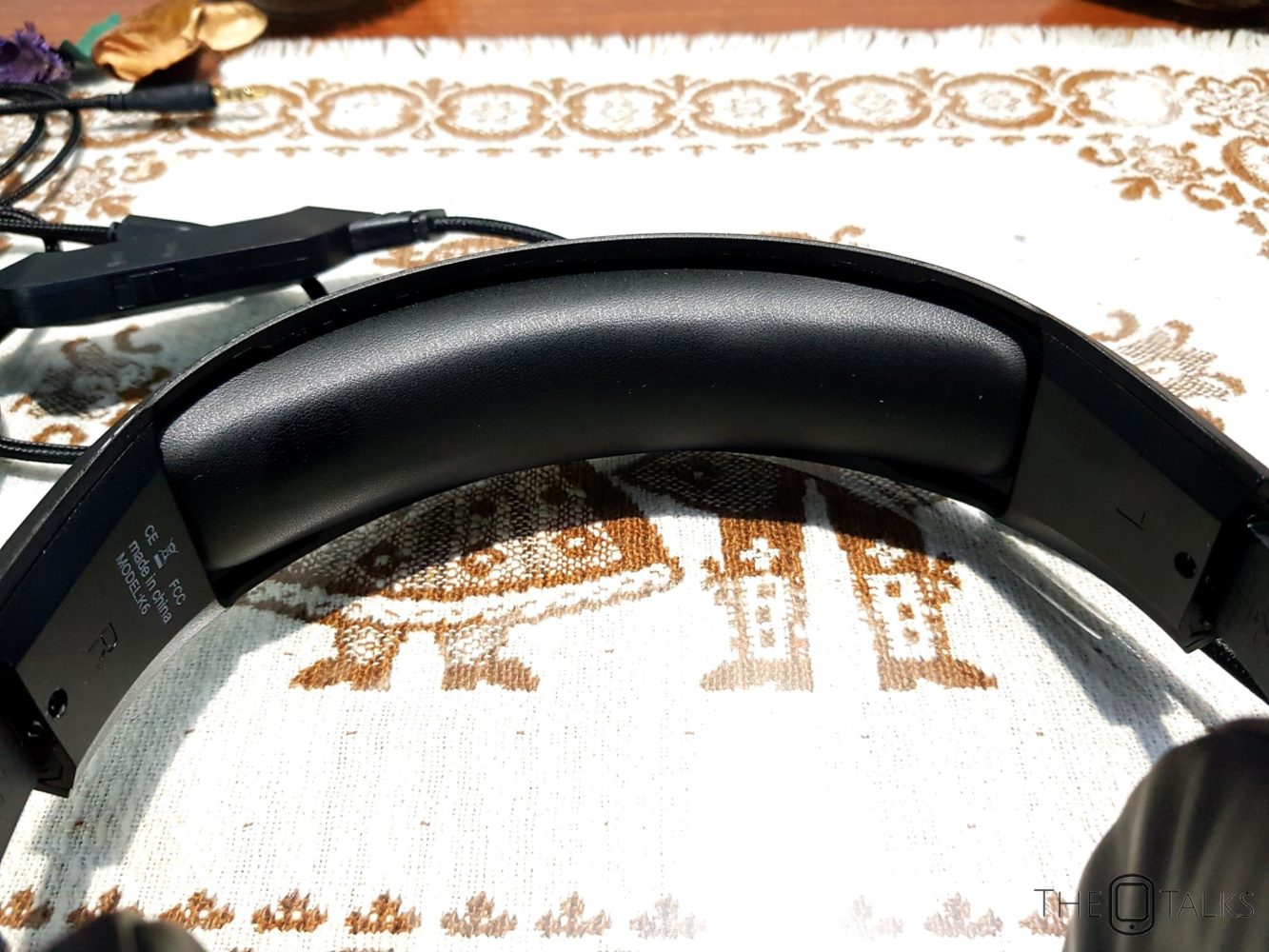 However, the down point was that it was difficult setting the extension of the headphones while wearing it because the slider was tight and had to use both of hands to open or close each slider, creating a lot of noise. However, nothing to complain as long as they are comfortable for long use and are under $30.

The sound quality is mediocre as you can expect from a cheap headphone. The overall volume of the headphones is medium, not that much that it will start bleeding your ears. Onikuma advertises these headphones to have the effect of a nice surrounding since we have the stereo effect (not comparable to the dual drivers, 5.1 surround headphones). I tested that in PUBG. The surrounding sound of the steps in the game was clear, however, I got confused at the gunfires sound direction when I set the volume at the highest. Single gunfire was clear and one can tell which direction it came from, but that’s not the case with multiple gunfires. For gaming, these headphones are perfect, since the volume doesn’t bleed your ears and the surrounding effect is exceptional under that price tag. 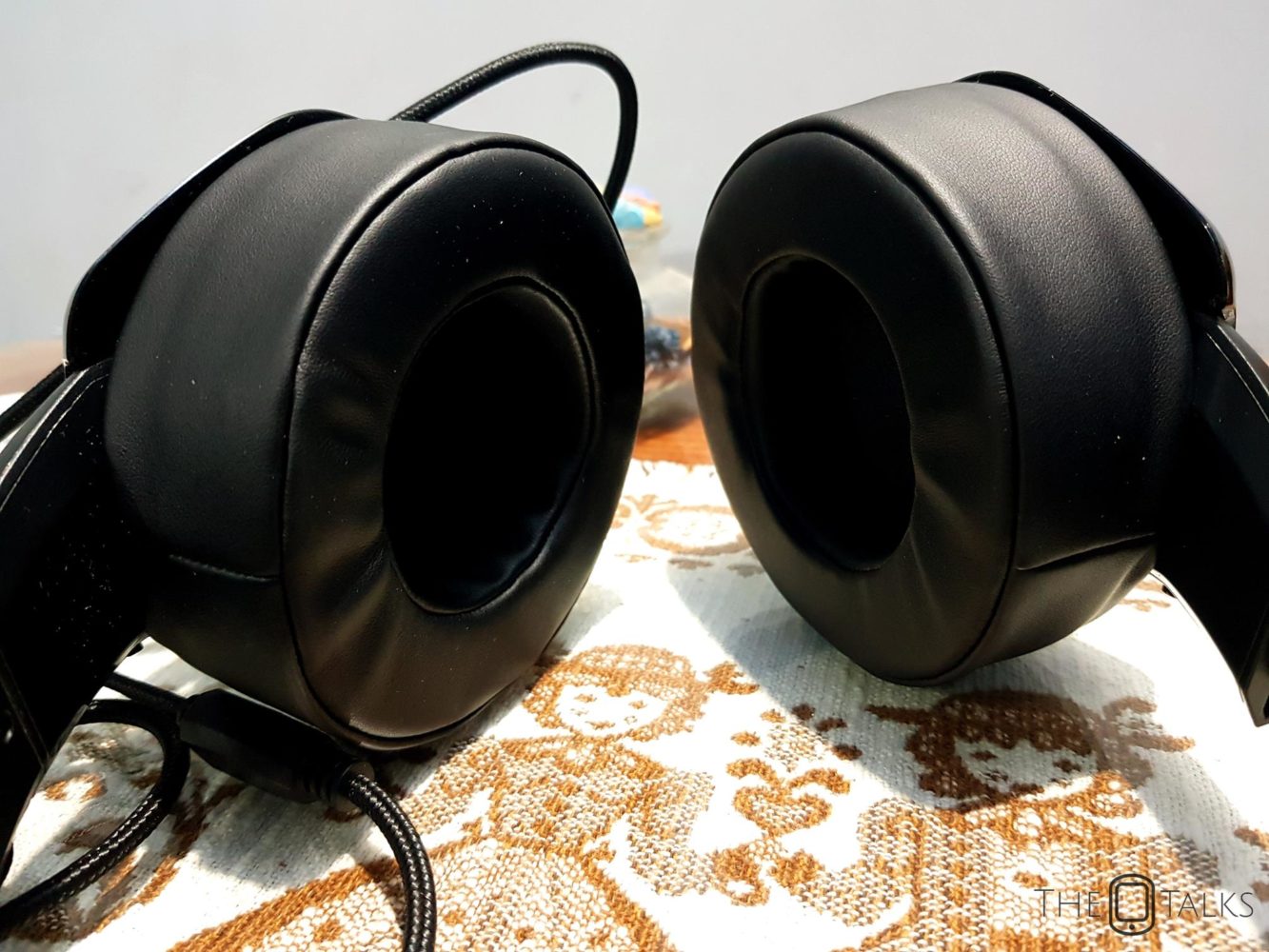 For the music, you can listen to the songs but don’t expect that high from Onikuma K6. Why? Everything is average here: mid-bass, average volume, average details. There’s no noise cancellation in the headphones but they do decrease some background noise while wearing (since they fit perfectly). I noted that the voice was pretty clear despite everything being mediocre.

Moving to the last part of this Onikuma K6 Gaming Headset review, K6 Gaming Headset is a wired headphone. Interestingly, the manufacturer is generous as the wire is almost a meter long, However, if you tend to use it on a laptop close to you, the wire will be touching your feet. While lying down the wire, for sure, tangles. Looking at this, the durability of the wire gets in question. Thankfully, the cable is braided and is robust. 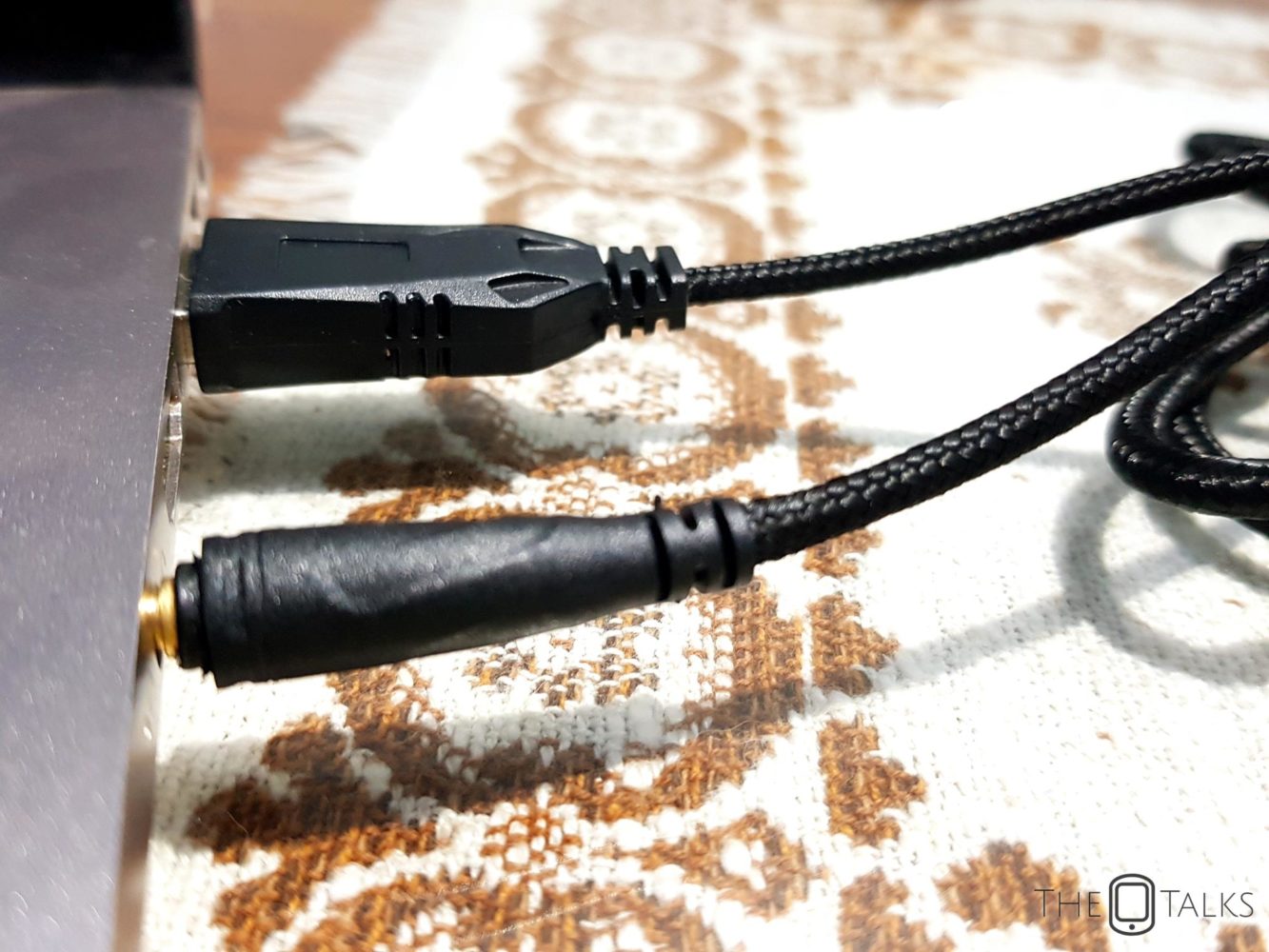 On the cable, one can find the volume wheel along with the microphone button option at the inline-remote which is a plus. However, the negative aspect comes as well. There’s no clip on the remote, you can’t attach the cable with something. This means you will just have to sit wearing headphones and surrounded by a meter cable. 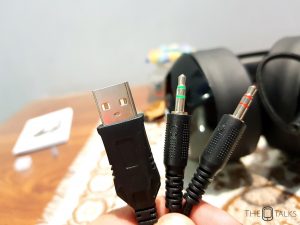 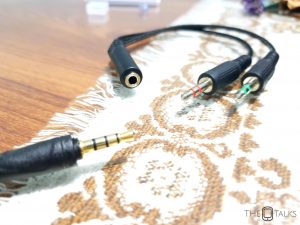 Like the robust gaming headphones, the microphone is located near the left earpiece. It has a dedicated part made of stainless steel which is rotatable to almost 170 degrees and can be turned in any direction. If I have to rate the microphone quality, I will rate it 8 out of 10. Though we don’t have the dual microphone option like in Bluedio T5 the single microphone has a surprisingly clear voice with almost zero noise. It is retractable, rotatable, and effectivity cancels the background noise for a much clear voice. 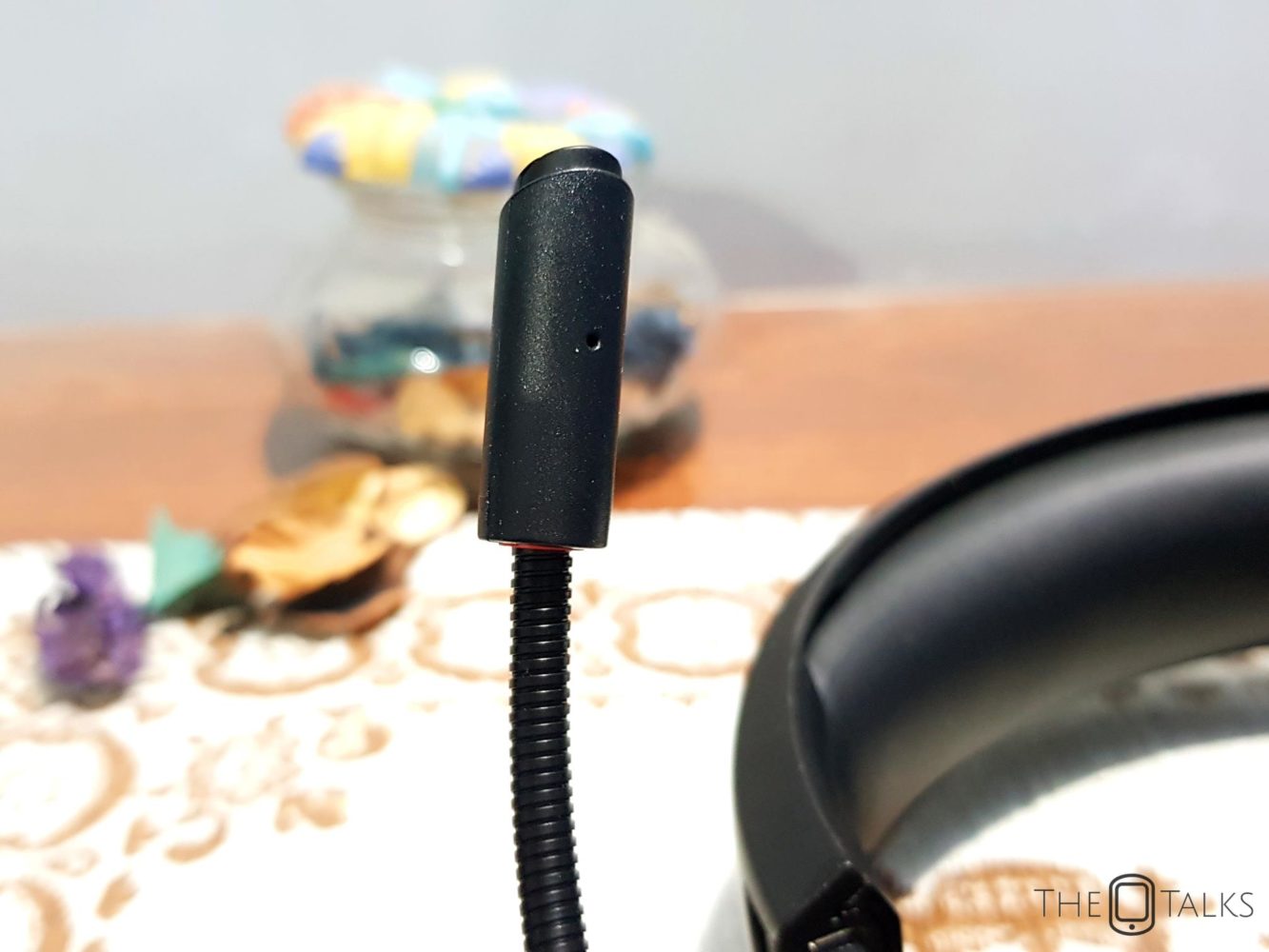 Summing up the whole Onikuma K6 Gaming Headset Review, obviously, a budget RGB headphone might have some down points but the highlights overcomes them. This new headphone from Onikuma fulfills a perfectly built gaming headphone design, nice RGB lighting, and most of all the comfy extra cushioning. You simply can’t ask for anything else under $30. Could you? Indeed:

It’s too Comfy for a Budget Price

If you are interested, you can grab Onikuma K6 Gaming Headset on Gearbest for a price of $27.22. It’s available in Red and Black (Multi-colored) options for now. Here’s the link to the store:

Note: Try selecting a registered post which cost only 2 to 4 dollars extra for a quicker and safer delivery around the world with a trackable code.