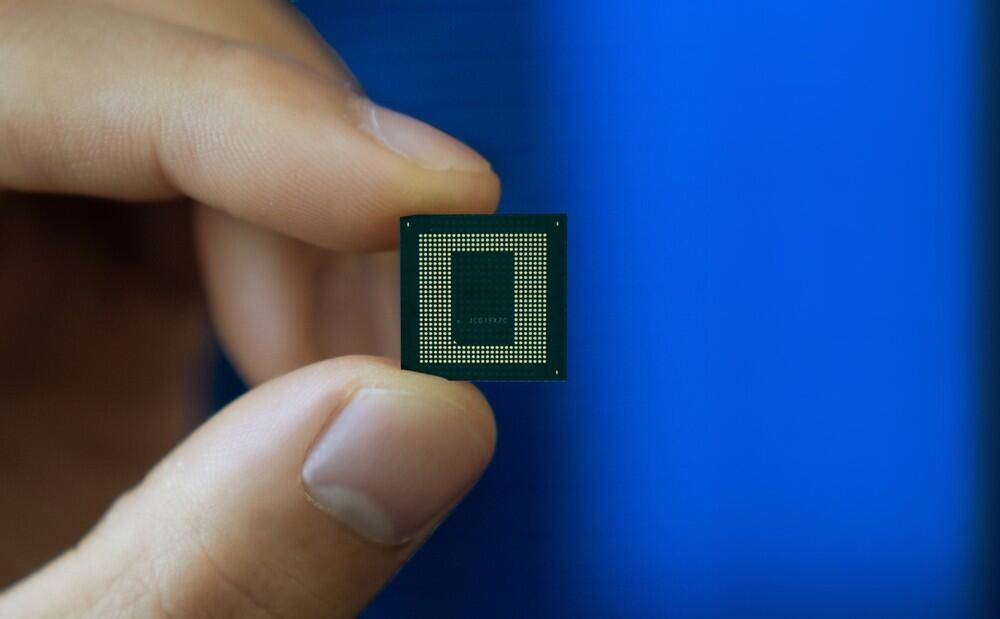 Today, Qualcomm finally released its new flagship SoC. As hinted by the rumors, it’s renamed from Snapdragon 875 to Snapdragon 888. The new SoC brings the super core Cortex X1, Cortex A78, and the first integrated 5G baseband. Let’s dive into the details and know more about Qualcomm Snapdragon 888 including its specs, phones, features, and AnTuTu score. 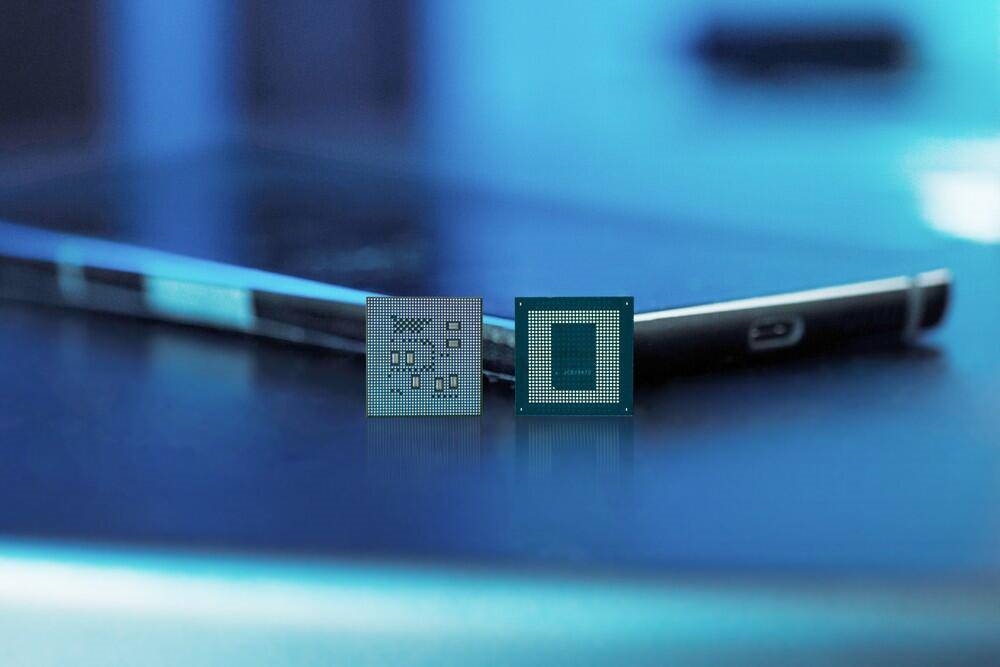 Snapdragon 888 features the newest 5nm EUV FinFET process by Samsung. In comparison, the previous Snapdragon 865 was based on a 7nm N7P process. This allows Snapdragon 888 to yield better performance per watt, resulting in more energy-efficiency.

The SD 888 is the first SoC to feature the super core known as Cortex-X1. In comparison to the A78, the X1 can perform 33% more instructions per clock, has 2x the SIMD hardware, and L1 and L2 caches capacity has been doubled as well. Moreover, it’s also the first Qualcomm SoC to introduce the Cortex-A78 core as well. The SoC features the same tri-cluster (1+3+4), octa-core design inherited from SD 865. The design consist of:

Finally, we have a dedicated core to boost the single-core performance. Previously, Qualcomm and the other SoC manufacturers were using Cortex A7x in both the high-performance and mid-performance section. As for the L3 cache, it is 4 MB along with 3 MB of System cache. In short, Qualcomm Snapdragon 888 core configuration has not rival.

SD 888 GPU also upgrades to Adreno 660. It’s 33% faster than the previous generation and 20% more power-efficient.  For the improvement in the gaming section, we also see the 3rd generation of Snapdragon Elite Gaming along with HDR10+ support. Now the GPU can achieve up to 144 fps in games. Moreover, similar to the SD 865, the GPU will also receive updates over time to optimize itself with the upcoming games.

We also see the Variable Rate Shading (VRS) allowing the shaders to serve on two or four pixels at a time, instead of just one. Another feature is the Game Quick Touch which can reduce touch latency by up to 20% on up to 120fps games.

The GPU also improves OLED displays thanks to Mura compensation. 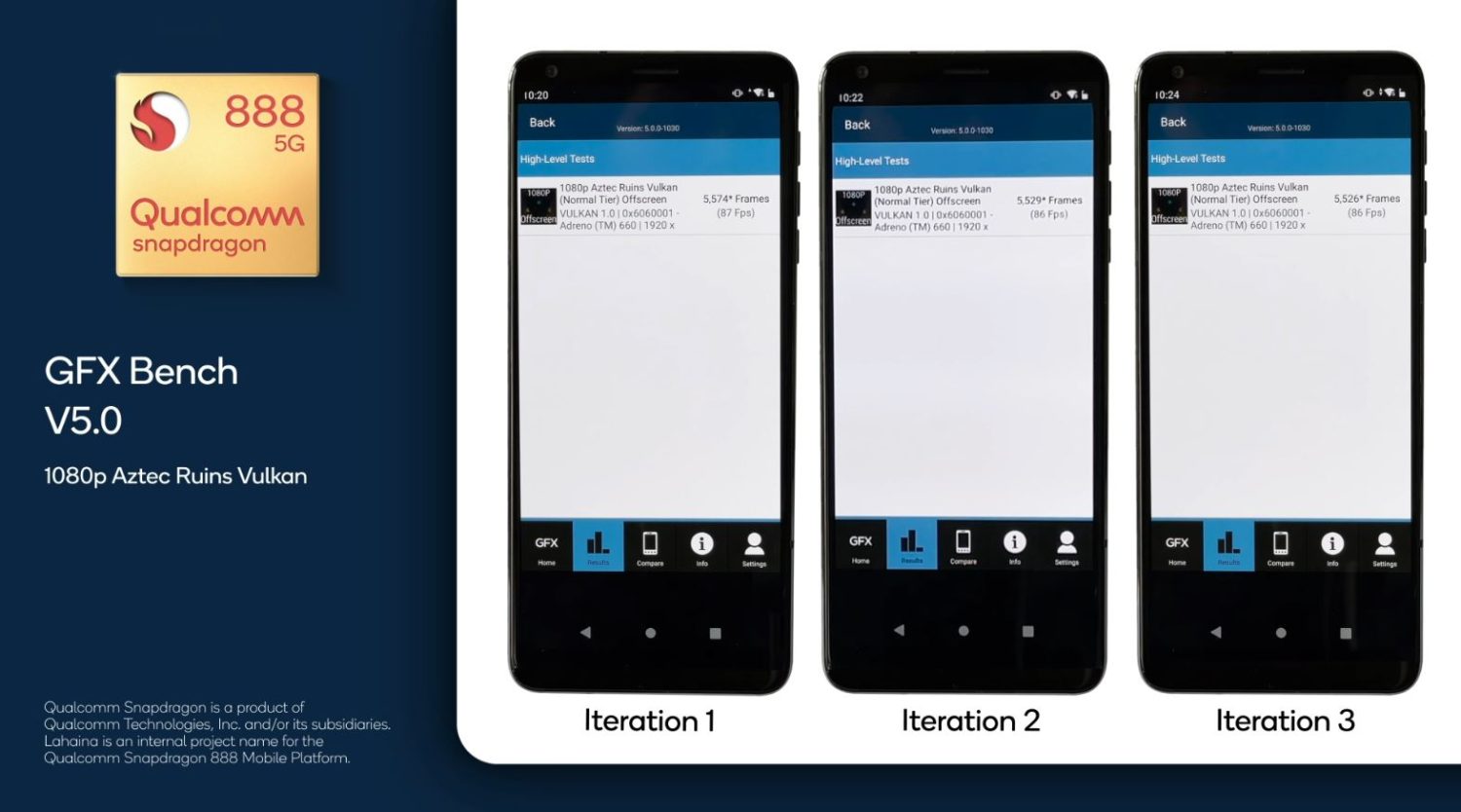 Snapdragon 888 features the Hexagon 700 which is an impressive upgrade from Hexagon 698 of SD 865. The score of the 6th generation of AI engine and DSP is 26 TOPS. The power efficiency has been improved up to 3x.

The 2nd gen Sensing Hub reduces power usage. The importance of this Hub can be judged by the fact that now 80% of the AI tasks go through the Hub to activate the Hexagon 700.

Although, we don’t have any Snapdragon 888 phone released which could be benchmarked on AnTuTu v8. However, we do have the official Antutu scores of the SoC with the prototype phone. According to the officials, the SoC scores around 735,439 points on AnTuTu v8. 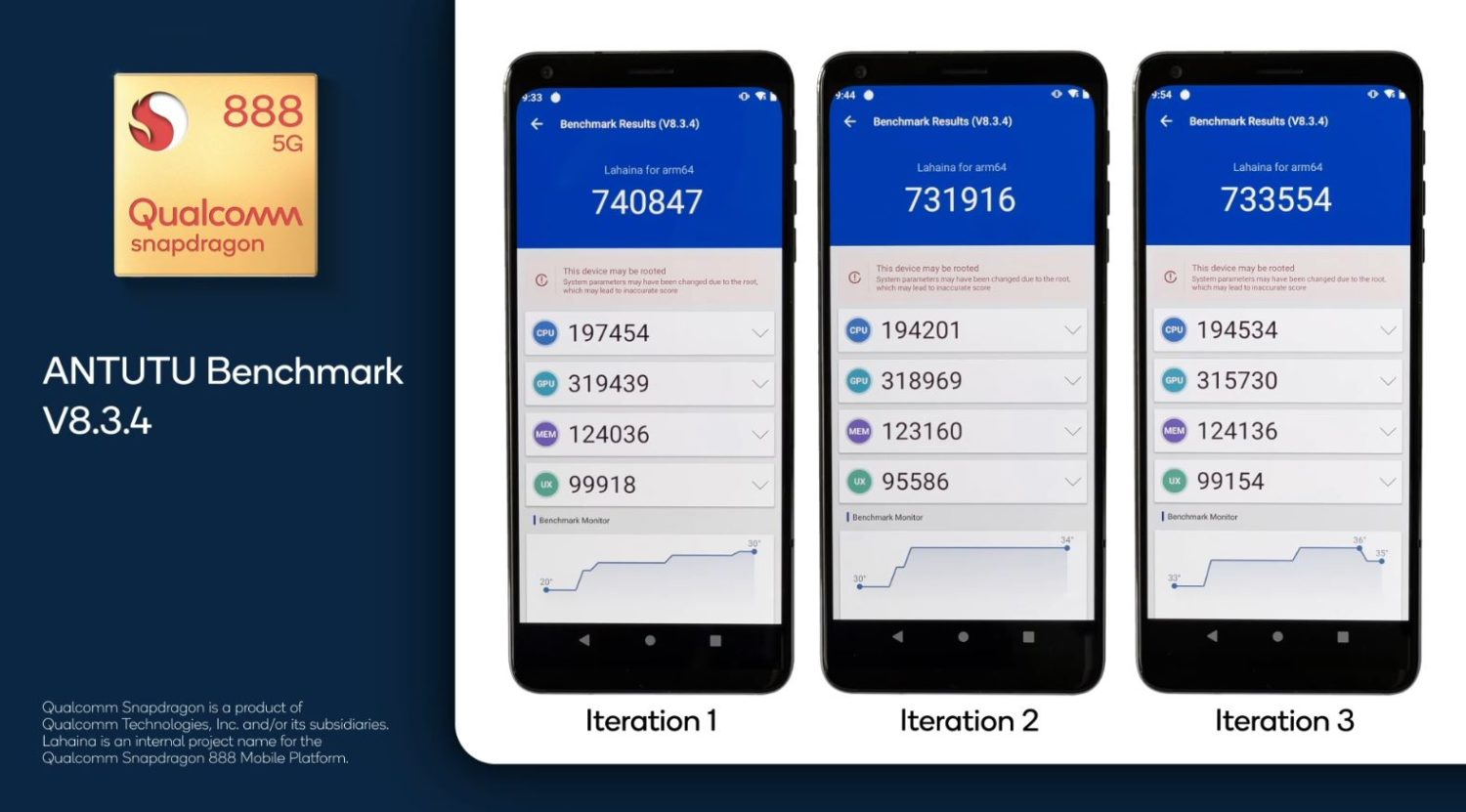 Here’s a comparison to other Android flagship-level SoCs benchmarks. 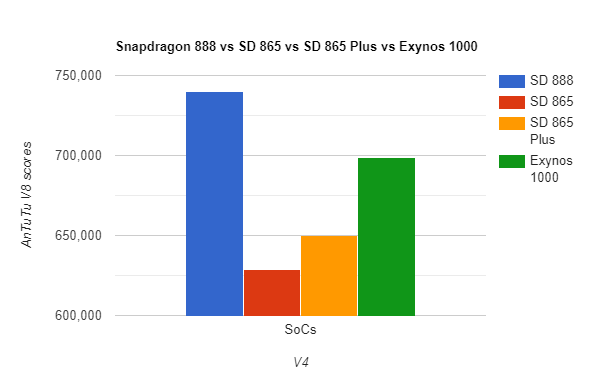 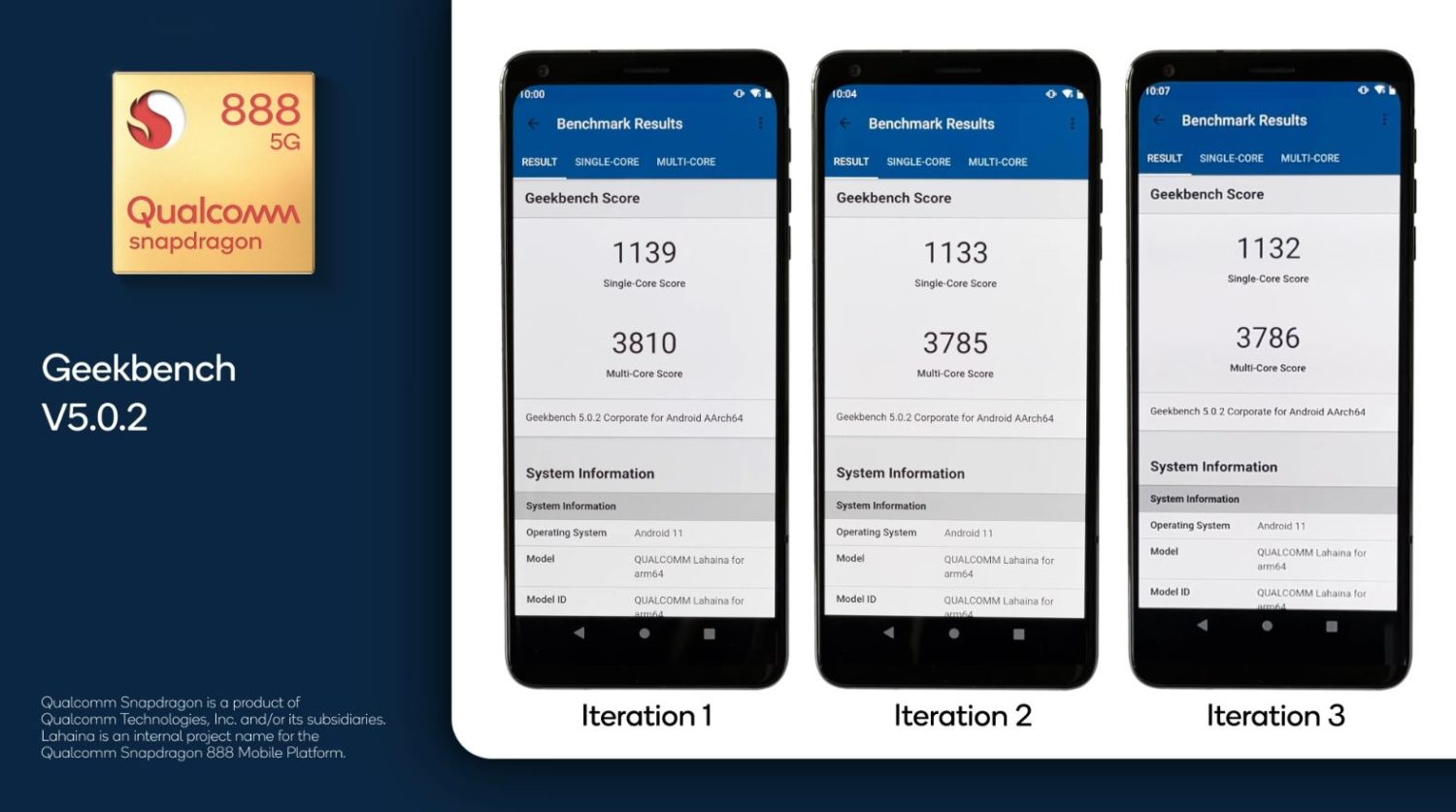 Qualcomm’s first integrated flagship 5G SoC is used inside the SD 888, which is Snapdragon X60 5G baseband. It has a max download speed of 7.5Gbps and a max upload speed of 3Gbps. It supports mmWave, sub-6GHz,

The official claims that the 5G baseband is superior in comparison to Apple’s A14 Bionic.

The new FastConnect 6900 system enables Wi-Fi 6  and can reach speeds up to 3.6 Gbps. The officials claim that speed is the highest in the mobile WiFi industry. The 6E standard also offers lower-latency, a boon for streaming games from a local PC (or the cloud, there the 5G modem can help as well).

Bluetooth 5.2 with dual antennas is present as well, along with the aptX.

Snapdragon 875 uses the Spectra 580 ISP. The ISP retains the maximum single camera support which is 200MP. It’s the first Qualcomm ISP to support a triple camera of 24MP each and it can also handle 3 4K HDR streams at one time.

With the faster gigapixel speed Qualcomm Spectra™ ISP, users can capture photos and videos at 2.7 gigapixels per second or roughly 120 photos at 12MP resolution—up to 35% faster than the previous generation. The SD888 can shot 10-bit HDR photos in the HEIF image format along with the SD865’s HDR10+.

Speaking of video playing, the new SoC can capture and play 4K videos at 120fps.

Qualcomm Snapdragon 888 announced its partners which will be featuring the new SoC. These are Asus, Black Shark, Lenovo, LG, Meizu, Motorola, Nubia, Realme, OnePlus, OPPO, Sharp, Vivo, Xiaomi, ZTE. The price of a Snapdragon 888 phone might vary depending on different manufacturers. Poco and Realme might provide the cheapest SD 888 phones starting from $450 USD. Meanwhile, OPPO, Samsung, and OnePlus might provide the expensive SD 888 phones reaching $700 to $900.

The following phones will be featuring SD 888:

In conclusion, Qualcomm finally provides an unmatchable core configuration with the new Cortex X1 core and A78 core. Moreover, let’s not forget about the 5nm EUV process, integrated 5G baseband which is better than 5G baseband of Apple A14 SoC. Finally, Qualcomm 8xx series will compete with Apple’s SoCs in single-core performance. 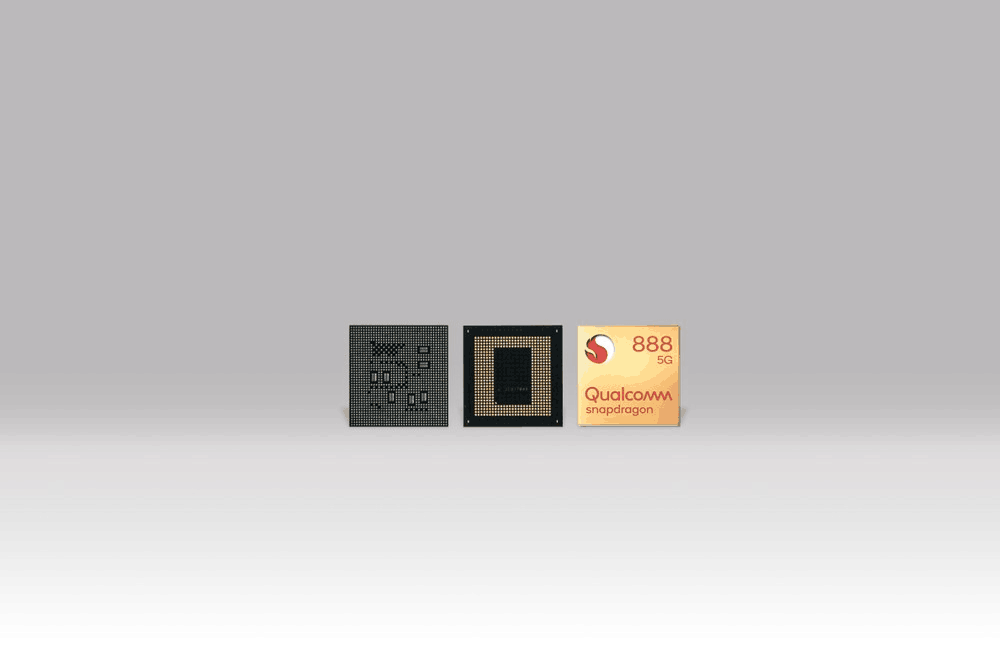