Xiaomi Redmi Note 7 seems to be the hottest thing right now. However, let’s break the momentum with another exciting news. After the release of Redmi Note 7 under the sub-brand ‘Redmi’ Xiaomi also announced that it will release the ‘Pro’ version soon. Today, we have a promotion picture of Redmi Note 7 Pro with us, which we believe leaks the greatest highlight of the Redmi Note 7 Pro configuration. 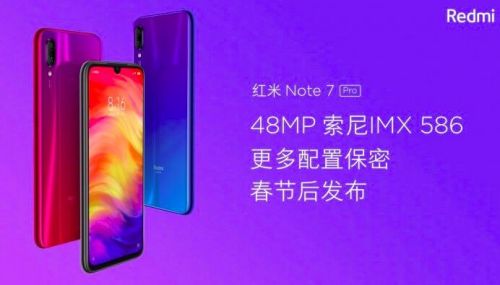 Looking at the promo picture above, it is understood that the biggest improvement of Redmi Note 7 Pro is the camera. The flagship will be equipped with a 48MP Sony IMX 586 sensor. However, due to the mass production of this sensor some time ago, coupled with the use of the Glory V20, it is estimated that Redmi Note 7 might have to wait for a while before mass production release.

In addition to the Sony IMX 586 sensor, the Redmi Note 7 Pro will also be equipped with the latest Qualcomm Snapdragon 675 processor. No doubt, with this rumored Redmi Note 7 Pro configuration the price of the Pro version will increase for sure. However, looking at the series, it is estimated that the Note 7 Pro will still have a competitive price for the same configuration. For sure, if the price much better than Redmi Note 7 (even if increased), then the Pro version will be a much better hit than the current flagship.

There’s some time till the release of Redmi Note 7 Pro. So for now, let the leaks increase our anticipation.