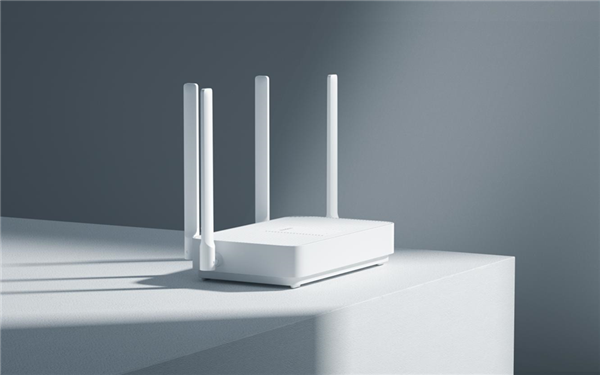 The Huawei AX3 is no longer the Cheapest WiFi 6 router

Previously, Xiaomi released the Xiaomi AIoT AX3600 router and Xiaomi AX1800 router. Today, we have the third Xiaomi WiFi 6 router and the first one from the budget-friendly sub-brand ‘Redmi’. The Redmi router AX5 beats Huawei router AX3 for the title ‘world’s cheapest WiFi 6 router’ priced at 249 yuan (35 USD). Is the hardware a bottleneck for this much price? Let’s get to know the specs, features, and functionality of the Redmi router AX5. 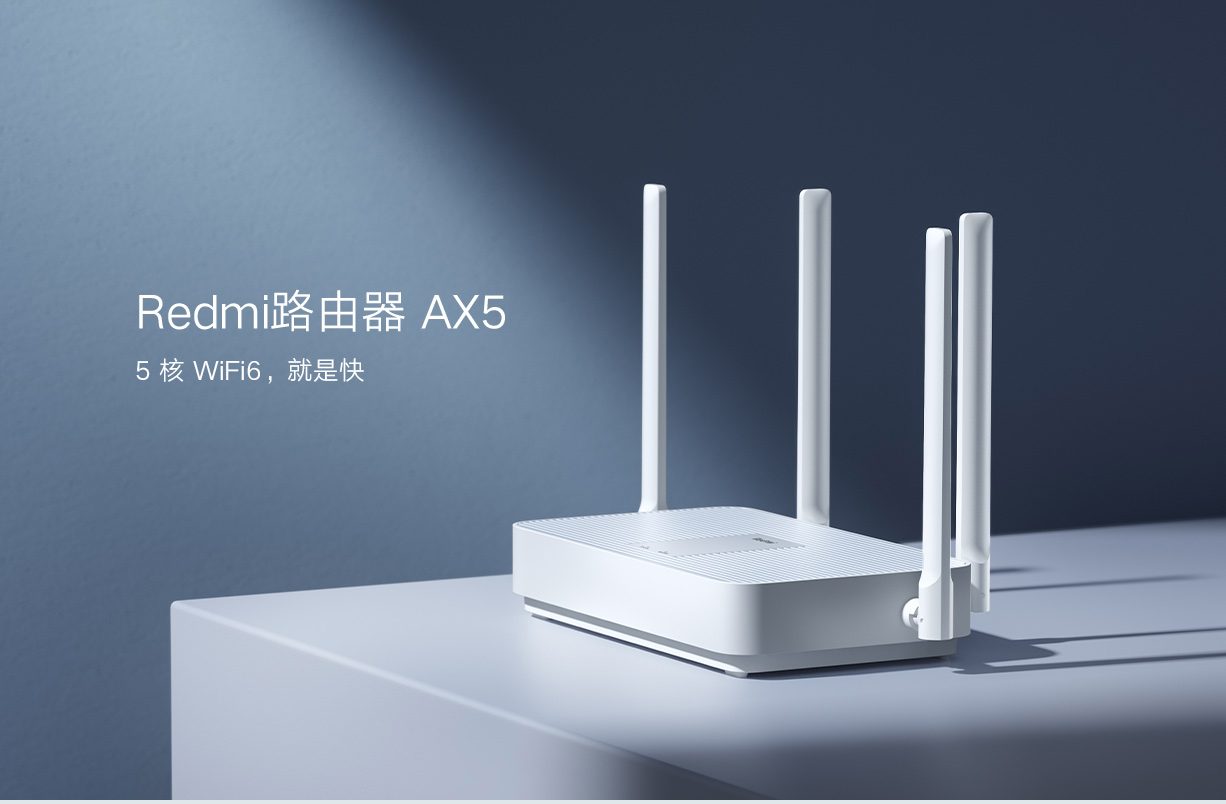 Redmi router AX5 – Is it really a lite version of the Xiaomi AIoT AX3600 router?

Unlike the previous two routers AX1800 and AX3600, Xiaomi this time provides a minimalistic and simple, white rectangular design to meet the targeted price set for the Redmi router AX5. It’s almost 2.5x smaller the size of AX3600 and almost equal to the Huawei AX3 and AX3 Pro. It occupies a space of 247 x 141 x 180mm. 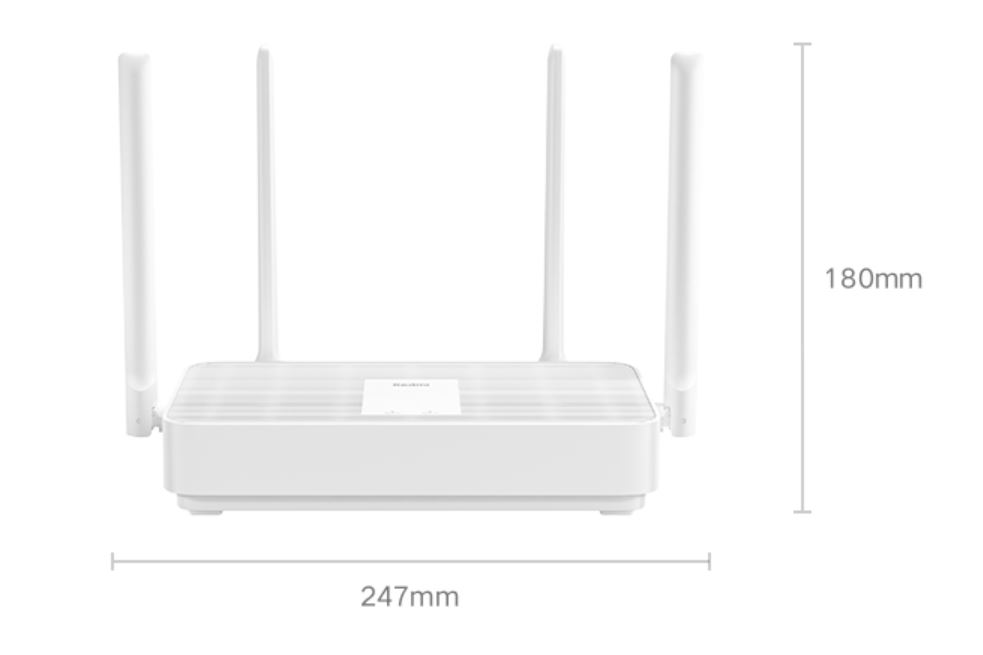 We can see the four 5dB external antennas attached which are moveable but not rotatable. Getting into the details, two of the antennas support 2.4G networking and two of them support 5G networking, which is quite similar to the four 5dB antennas of the Huawei router AX3 Pro. 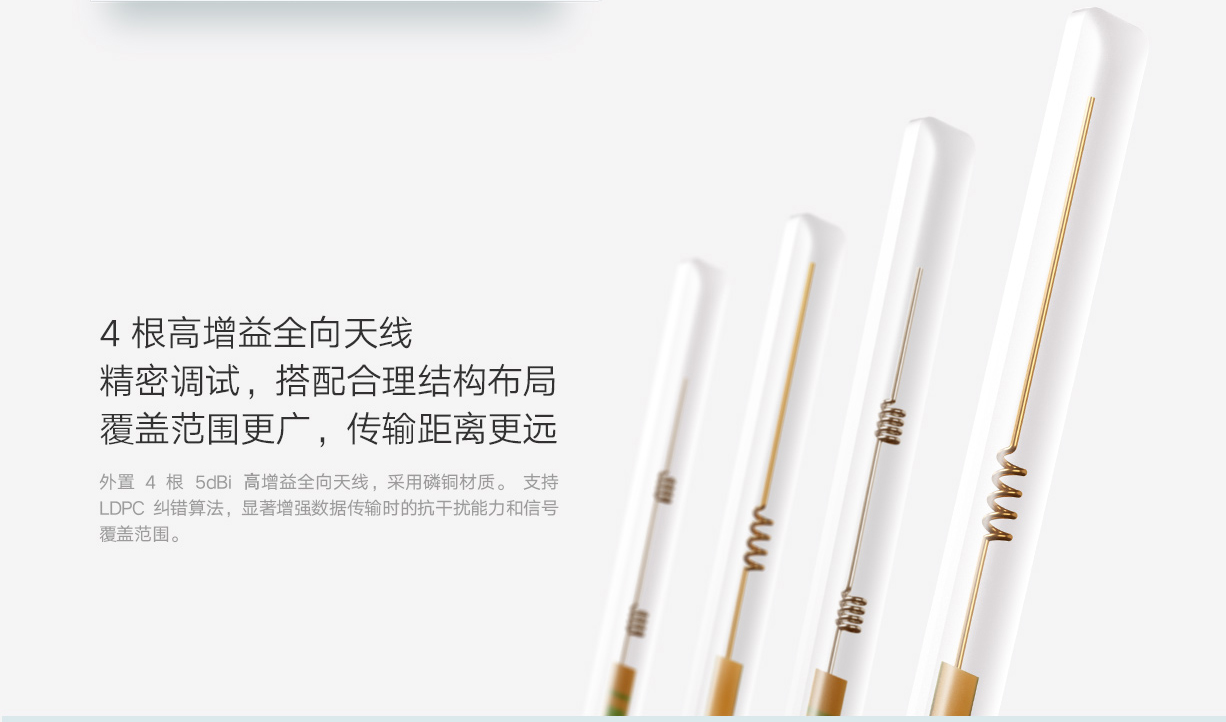 Heat dissipation should not be an issue here, because Xiaomi has provided the whole top of the router with air ventilation as well as the bottom. A heat sink is placed at the bottom to improve the heat dissipation.

On the top, there’s two LEDs, one of them indicates networking and the other one indicates system power. 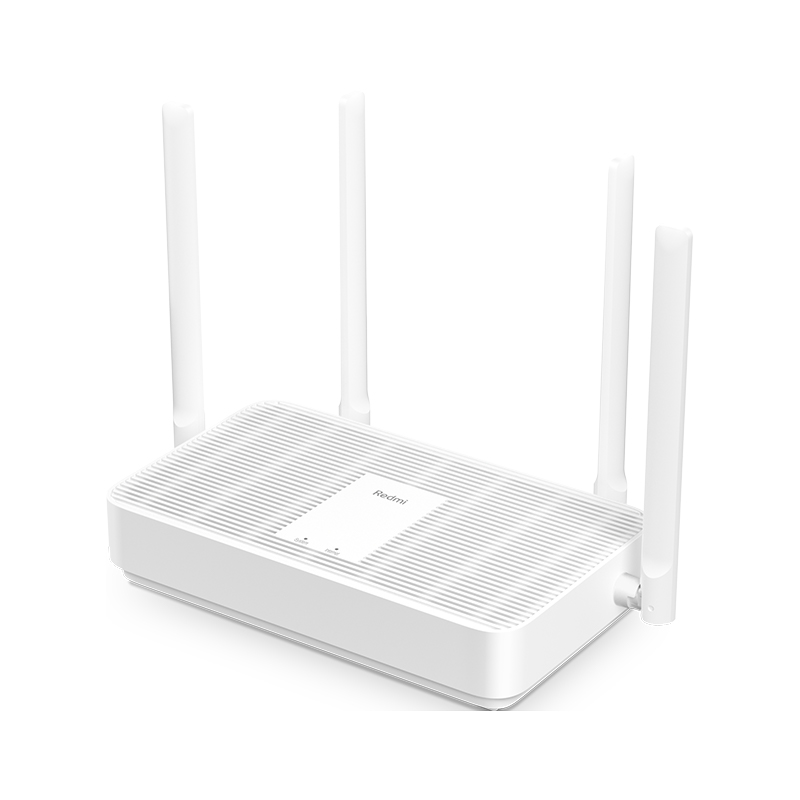 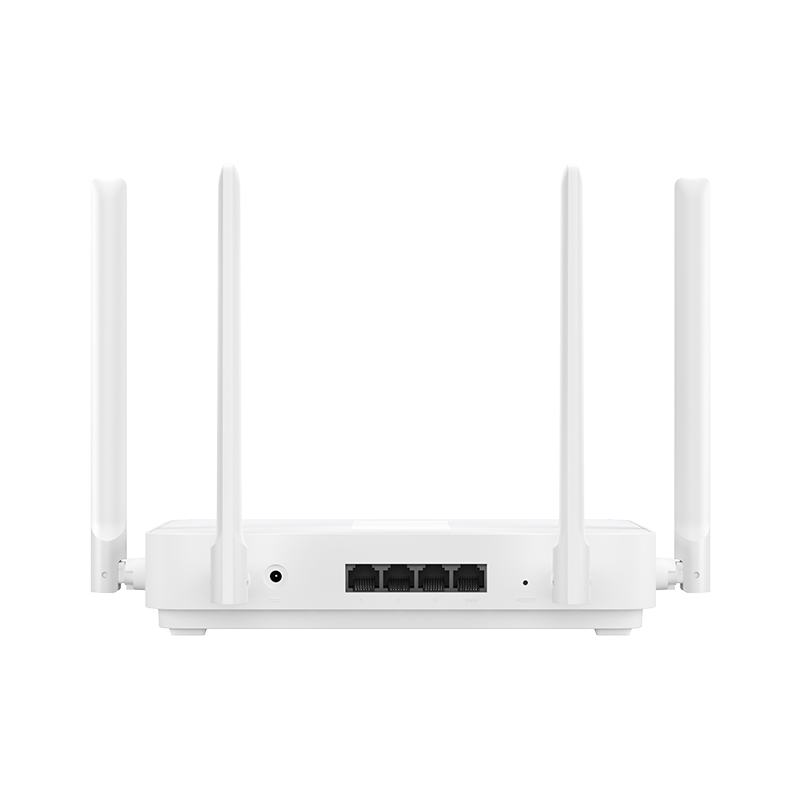 In terms of hardware, Redmi router AX5 uses Qualcomm solution, enterprise-grade 5-cores 14nm SoC which is ‘Qualcomm IPQ6000‘. It comprises of 4 x Cortex A-53 core running at 1.0GHz and 1 x NPU running @1.5GHz. In comparison to the similar priced Wi-Fi 5 AC1200 router, the Redmi router AX5 wireless rate can be increased by 52%, through Gigabit Ethernet port. It can download an HD movie in 8 seconds. 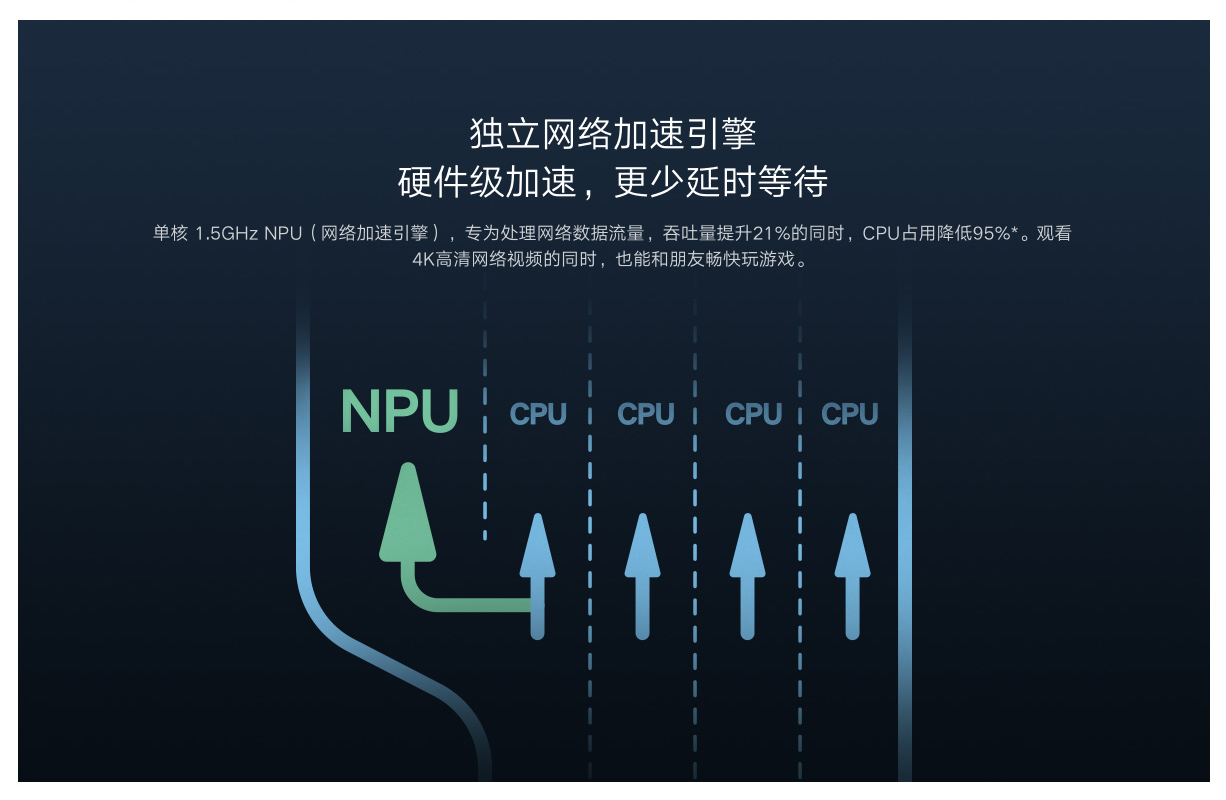 The 256MB RAM and 128MB ROM allow connectivity of up to 128 devices at one time. We have already seen that this configuration is enough to run the WiFi 6 5GHz networking on multiple devices in the Huawei AX3 Pro review. The hardware is not the bottleneck for speed.

Just for a quick comparison, the Xiaomi AIoT AX3600 router has much better 6-cores Qualcomm IPQ8071A chip with a 4-core A53 architecture @ 1.0GHz and a 2-core network acceleration engine @1.7GHz. Moreover, the RAM and ROM have twice the capacity which is 512MB and 256MB, respectively. Since the hardware performance is almost 2x, we have the supported devices doubled to 256 devices at one time, which is the highest device support we have seen for a WiFi 6 router.

Redmi router AX5 also supports OFDMA (up to 1024 QAM), MU-MIMO, and other WiFi 6 technologies and multiple Mesh networking which will be provided in a firmware update on July 15.

OFDMA technology allows the router to complete the data transmission of up to 8 devices in one transmission, and the network delay can be reduced by 66%. MU-MIMO improves the experience of multiple users using the internet. Multiple Mesh networking allows us to use the router as a signal extension to improve the signals in the house. 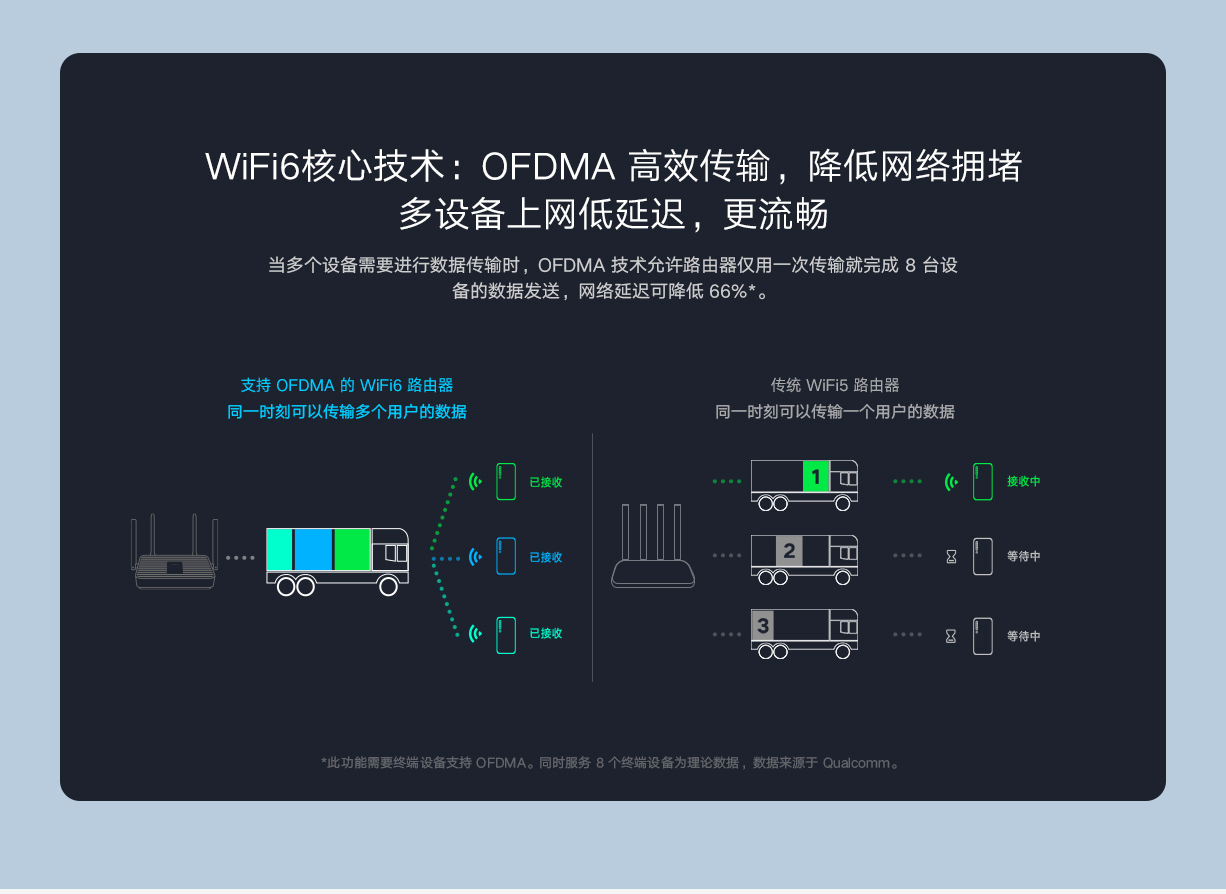 The total bandwidth support this time is relatively lower compared to the Huawei AX3 Pro and Xiaomi router AX3600. We have two frequencies support 2×2 2.4GHz with a maximum speed of 574Mpbs, and the 2×2 5GHz with a speed up to 1201 Mbps. This makes the total speed up to 1775 Mbps. Unlike the AX3600, there’s no dedicated AIoT antenna and speed for it, and stream channels are 2×2 not 4×4.

The only thing which isn’t confirmed is the 160MHz network support, which we doubt isn’t present at the moment but might be provided soon in the firmware update. 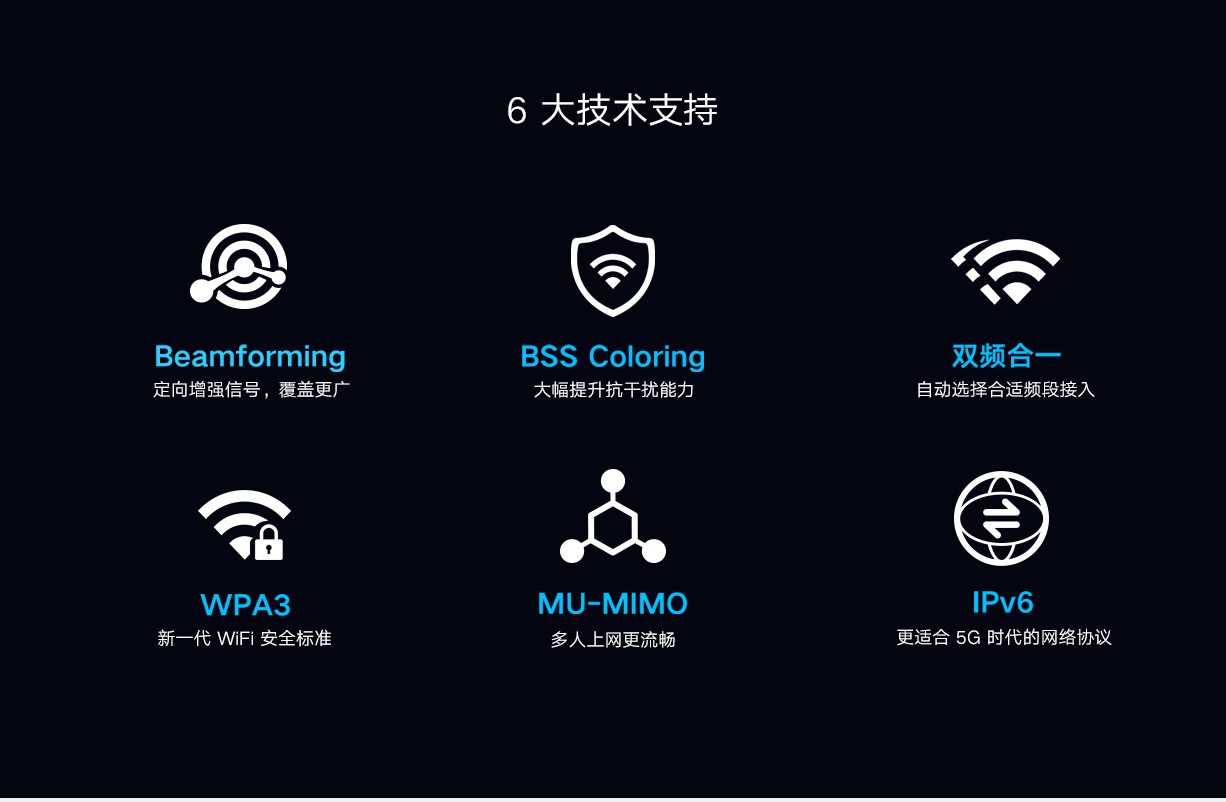 Xiaomi router AX5 can be connected via the Mi WiFi app which is in multi-language. There’s also the web-page access as well. Since there’s no global version or the global firmware update yet, one can’t change the language of the web page and the location from the default ‘China’. Apart from this, similar to other Xiaomi routers, the firmware is based on OpenWRT. 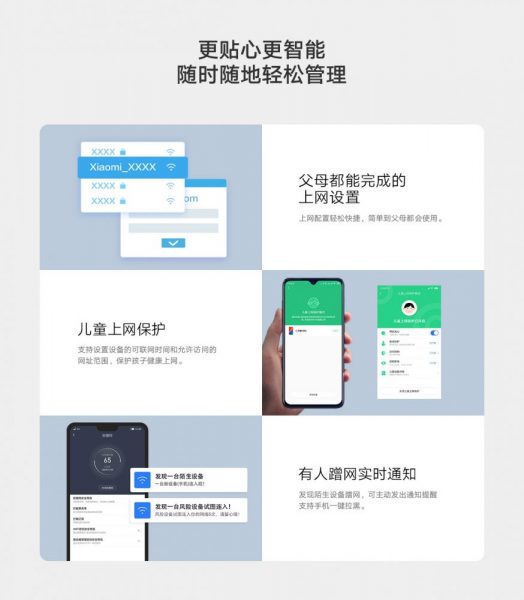 So, it’s true that the AX5 here is the lite version of the AX3600 since the design has been changed to minimalism along with reduced Antennas (5dB vs 6dB) as well as the hardware and connectivity which is almost the 2x lesser (moved from 6 cores high-end SoC, to 5-core mid-end SoC, RAM changed from 512MB to 256MB, ROM from 256MB to 128MB, 160MHz in question). The speed has also been reduced for the 5GHz networking from 4×4 to 2×2. However, all this is done to reach the super affordable price of 249 yuan (35 USD) which is 2x lesser the price of Xiaomi AX3600, making it:

The Cheapest WiFi 6 Router on the Planet

The redmi router AX5 has a price tag of 249 yuan (35 USD). It will start selling in China at 10 am on June 10. The pre-sale price is 229 yuan on the official Mi China website. As for the global purchase, the product is no available at the moment. It is rumored that India will have an official launch of this router soon. The global Chinese stores might sell AX5 router for a price of around $45 to $55. We will let know you know if it’s available for global purchase so stay tuned.

Update: The router is now available on Aliexpress and Amazon. 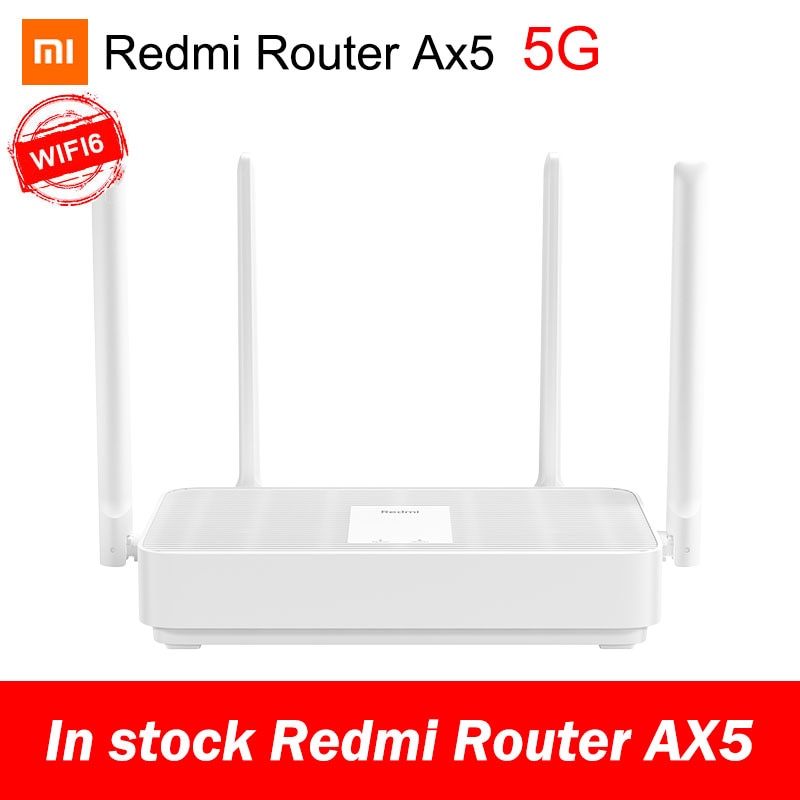 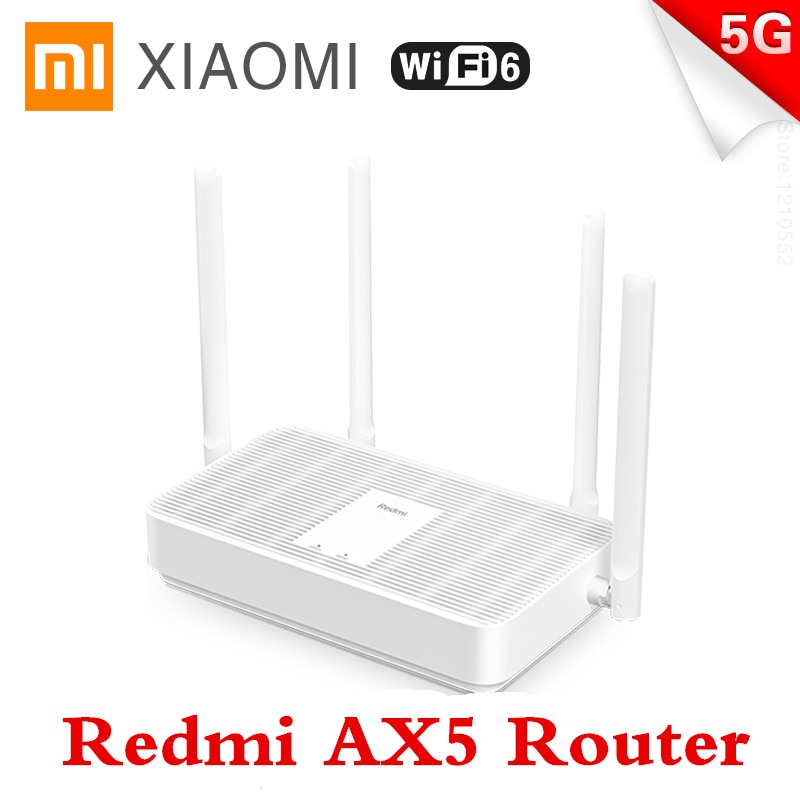 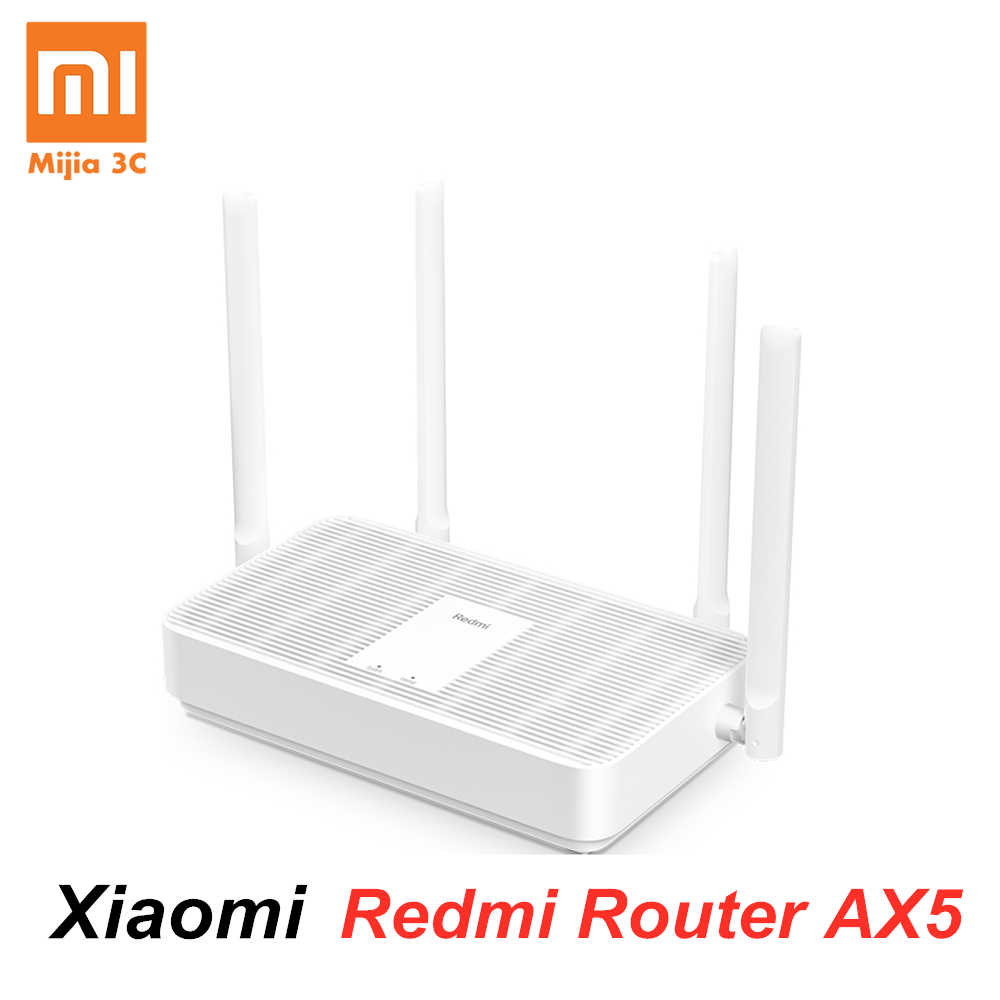 Yes, the hardware supports 160MHz, but there's no support provided by the software in the current firmware. It is expected to provide the 160MHz support in the upcoming firmware update.

Yes, it does support mesh networking which will be provided in the upcoming firmware update on July 15. You can use it to extend the signals of the main router.

The App does support English and other languages but not the web page. Because of the default Chinese firmware which has location set as China and language as Chinese.

What is the App for connecting Redmi router AX5?

One can connect the router with Mi WiFi App which is available in multiple languages.

What is the firmware / ROM of Xiaomi routers (including Redmi AX5) based on?

It's based on OpenWRT.

Is there a global version of the Redmi Router AX5?

No, not that the current moment (June 10). Xiaomi might release the Redmi router AX5 in India with the global firmware support.

What is the price of Redmi router AX5 in USA, China, Europe and India?