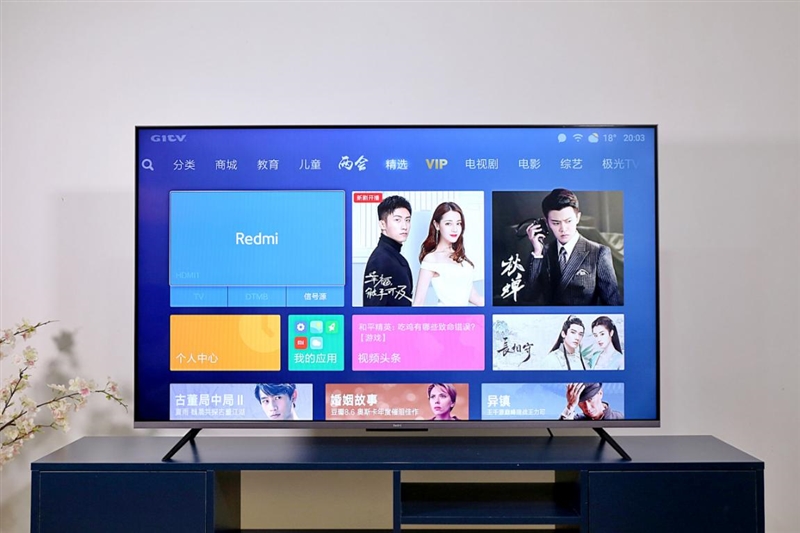 As a major price-performance brand, every time Redmi launches its products, it will bring users all around the world a lot of surprises in configuration, performance and price. Starting from old mobile phones, and then to enter various fields, as long as you see the “Redmi” logo, it means that a cost-effective high-quality product is coming. Among those fields is the section on televisions, where this company has already made itself known, and especially with its most recent launch, the Redmi Smart TV X series with three 50, 55 and 60-inch televisions. Today we are going to talk about the 55-inch TV, and we will show you its characteristics in this Redmi Smart TV X55 Review.

For ordinary users, the 70-inch and 98-inch high-cost TVs are really eye-catching, but the arrival of Redmi’s first “small screen” TV is even more exciting. After all, these “big screens of conscience” are more important in winning the word of mouth, while the 55-inch “small screen” is the main force in the market. A TV with the right size, good performance and good quality is the official Redmi root in the market.

The television that we are going to show you in this article has a size of 55 inches, although in the Redmi Smart TV X series two more models come, with sizes of 50 and 60 inches respectively. Well, starting to talk about the design and appearance of the Redmi Smart TV X55, this device has a narrow-frame full-screen design which is definitely very eye-catching, screen that is surrounded by a very small border made of a metal material. This type of structure of the metal frame can be seen more clearly from the back, where the splicing process is used. Considering its price, it is justifiable to not use a higher-cost integrated molding.

Located just below the central part of the screen, several details are located, among which are the Redmi logo, as well as the signal receiver, the classic indicator light and the physical buttons to control the TV manually. Likewise, the very slim frames along with the curved design of the back make this new and updated Redmi TV visually slimmer than ordinary TVs of the same grade, while still leaving enough room for module heat dissipation, backlight and controller board, without worrying about stability.

On the other hand, on the back, the interfaces of this smart TV are all distributed on the left side (facing the screen) with the power supply on the right side, while the power adapter is built-in and the external only needs to be connected with wires. However, the interfaces are far away from the frame, and daily installation may cause some trouble. With that said, the orientation of the rear interface is divided into two types: portrait and landscape. The horizontal interface is three HDMI 2.0 interfaces, one USB 3.0 interface and one USB 2.0 interface that compared with the vertically placed interface, it is easier to complete operations such as insertion.

Also, vertically placed are the network cable socket, AV interface, S/PDIF interface and an Antenna interface. Lastly, it’s worth mentioning that it comes with a smart remote control.

Now, going to talk about its screen, the screen of the Redmi Smart TV X55 can achieve 100% sRGB color gamut coverage, and AdobeRGB color gamut coverage reaches 81%. In terms of brightness and contrast, the maximum brightness of this Redmi TV is able of reaching 361nits, even though based on the results of multiple tests, the standard brightness of the screen should be 350nit. Also, the contrast ratio of the screen is very high, reaching more than 2000:1, this being such a high contrast ratio to be in a VA panel.

Just as mentioned earlier, this TV uses a VA panel with graded sub-pixels that compared with the IPS panel, it will have higher contrast and dark field performance, and darker colors will also have more details. Likewise, to the advantages of the VA panel, the light leakage under the pure black display is not serious, the entire screen has no dead pixels and in a gray ray scale transition, all color blocks can be displayed, and the transition is even and natural; about this, the levels of the bright and dark parts can reach excellent standards, the transition is uniform, the layers are clear, and there is no situation of unification.

In terms of viewing angle, all directions on the front can meet the requirements of clearly observing all the contents of the screen, while the color block diagram of the color system used in the test is clearly layered, and there is no merging phenomenon. With that said, the Redmi Smart TV X55’s screen itself is a true 4K panel; in tests, the details of the small characters that meet the 4K requirements can be clearly displayed. Also, it supports dynamic contrast, local contrast, dynamic color and other image quality optimization functions, and the effect is very obvious when testing 4K images. It must be said that after taking effect, the image will not have the gray feeling, and the color saturation and clarity will be improved.

On the other hand, this screen also supports the playback of 4K HDR resources, which can enhance the dynamic range of the light and dark of the video playback, while retaining a lot of details. However, its panel’s performance for HDR is not good (in HDR mode, the maximum brightness is only 350nit, and there is no partition backlight), so HDR can only be used as an icing dessert instead of a main dish.

Motion compensation is undoubtedly the biggest highlight of this time. In the previous products, this function only appeared on the super-sized flagship products, but this time, it was fully decentralized to the Redmi Smart TV X55, which is a cost-effective model. With the help of its algorithm, this TV can insert frames for pictures below the target frame rate (60FPS) when playing video resources.

By automatically identifying the picture content, when the picture changes are consistent with short-distance movement and regularity after this condition, frame insertion will begin and, after processing, the picture will become smoother, which is equivalent to the improvement of dynamic vision in general, and the observation of high-speed moving objects will be clearer.

Of course, the TV is at home, so in addition to watching TV programs and movies on a daily basis, there is also a relatively small demand for using TV as a screen for games. Since most users will want to use it as a screen for different types of games, we are now going to talk about the input delay of the TV. Generally high-end TVs can control the delay to about 20ms, but some cheaper products have not mentioned this. It will not be found until it is used, and the horror with high delay cannot be used in the game at all.

Using the same screen, simply test the input delay of the Redmi Smart TV X55. In the case of a wired connection, the input delay is about 90ms, and the delay is greater under wireless projection, reaching about 150ms. In terms of results, the 90ms wired input delay is acceptable, like connecting a game console or a computer to play games, some non-fighting and FPS games have less stringent input delay requirements, and playing games under 90ms will not feel obvious frustration.

However, the 150ms delay of the wireless projection screen has a slightly greater impact. Considering that the current mainstream mobile games are mostly online games, there will be a wireless delay of about 50ms. If the comprehensive delay is 200ms, it will inevitably affect the game experience so, therefore, it is not recommended to use wireless projection to play mobile games on the Redmi Smart TV X55.

To see the way in which this television works and plays the graphics of a console, we tried to connect a PS4 Pro. With that being said, after setting the HDMI connection mode to HDMI 2.0, the PS4 Pro correctly recognized and turned on the HDR mode, and although the brightness of the TV is more general, its color performance is still improved compared to the SDR mode.

This TV also has a special characteristic, and is that, in the modern era where the smart home concept is so popular, the control method of the Redmi Smart TV X55 is definitely not limited to this form of remote control. This Smart TV is equipped with the voice assistant of Xiaoai classmates, which is also equipped with a microphone to support voice recognition, search for videos, search functions, and just move the mouth, eliminating the trouble of turning pages, entering, and searching.

Voice control can also be used to control the interface directly instead of the remote control. When voice control is activated, the entire screen will be paused, and at the same time all options will appear digital signs, with the help of digital signs can be remotely controlled in the voice. This product can even be used as a home control hub, and that’s because comes with the Mijia APP, you can view the connection status of all smart homes, and also display the message pushed by the connected device in the form of a pop-up window, and display the monitoring screen in the form of picture-in-picture.

Now, having talked about some of the specs that are inside this device, let’s talk about its chip. Although many often value the panels of TVs and monitors, the role of image quality chips in the entire system is often overlooked. It can be said that the quality of the panel is the baseline of a TV, and the optimization and improvement of brightness, color, contrast and even sharpness under the blessing of the chip, and even the support of additional functions like MEMC are its best performance. Well, the Redmi Smart TV X55 uses Novatek’s NT7621D as its chip.

From the architecture, it uses a more advanced combination of a dual-core Cortex A73 and a dual-core Cortex A52. The image quality algorithm is quite worth looking forward to; from the price point of view, the same size products equipped with the chip often cost more than 3,000 yuan, so it can easily be said that the this smart TV has once again achieved a “superior” price/performance ratio in terms of hardware configuration. At least in terms of chips, this time the NT7621D on the Redmi Smart TV X55 will no longer become a controversial bottleneck as before. 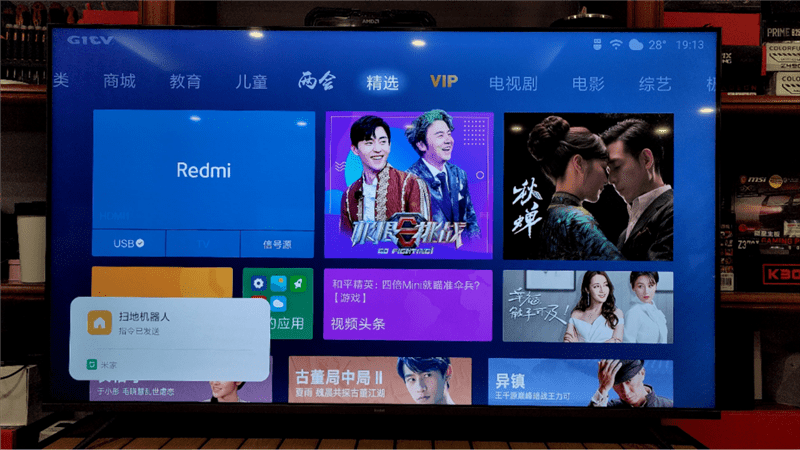 While the configuration is complemented, Redmi is indeed paying more and more attention to the user experience. The changes in advertising formats, the integration of video resources, and even the support of Xiaoai and Mijia have given this Smart TV its core competitiveness. Such a rich ecosystem is enough to distance itself from those traditional TV giants.

But in the final analysis, the competitive advantage of Redmi Smart TV X55 is still extremely high cost performance. The so-called price-performance ratio is to use good steel on the blade and provide users with a superior experience at a reasonable price. This product is undoubtedly finally on the road this time; the strong chip, MEMC motion compensation frame, and high-power speakers are all the key points to hit the core of the user experience