Running the latest standard Android OS on old smartphones coupled with 1GB RAM and 8 / 16GB storage might seem impossible. The outdated or low spec phones can’t withstand the latest apps and heavy gaming. That is why Google has launched a streamlined version of Android known as Android Go. You can get the latest updates of Android even on a low-end device. Thus, the audience can enjoy Android smartphone at a much cheaper price (Under $50). 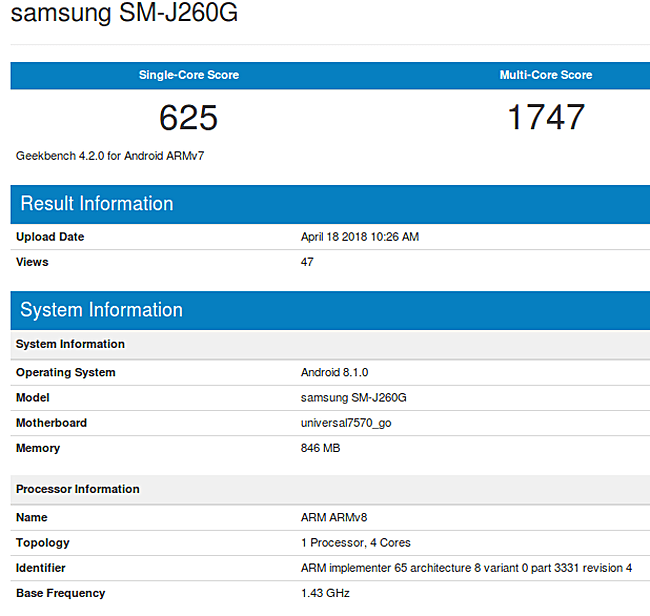 As you can see in the image above, the Geekbench score (single core: 625, multi-core: 1747) of the phone is relatively low. So we can consider it a low-end smartphone. Moreover, in the specs provided, the RAM is 1GB (846MB), a power efficient quad-core processor (@1.43GHz) which is expected to be Samsung’s own Exynos 7570 SoC.

How do we know that it’s running on Android Go? Well, in the motherboard codename appears to prove that with the name ‘universal7570_go’.

Summing up, the upcoming smartphone from Samsung J-series or new series will run on Android 8.1 (Android Go) with a 1GB RAM and a Quad-Core processor (Exynos 7570). It will be Samsung’s First Android Go Phone. No doubt, Samsung plans to overtake the low-end smartphone market, this year.