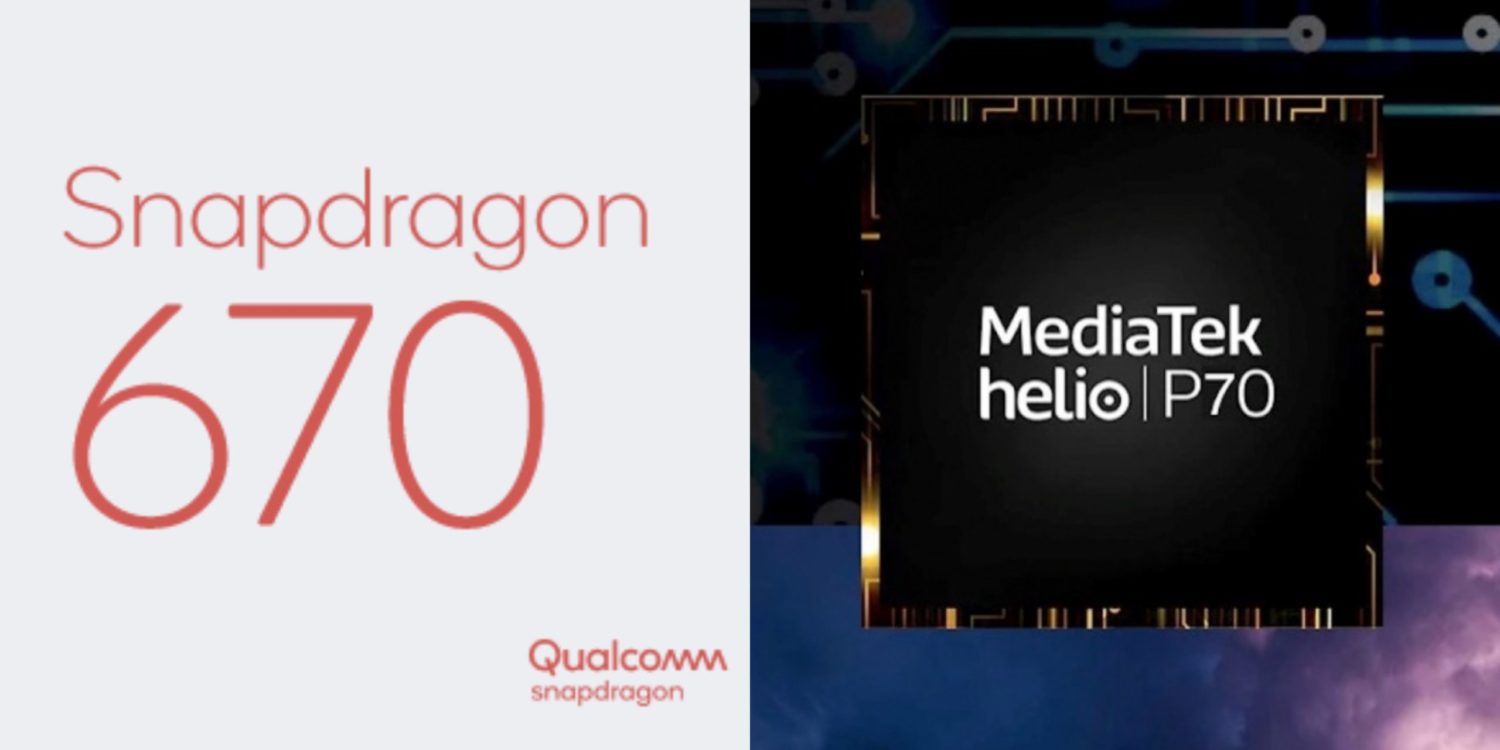 Xiaomi, Vivo, and Oppo are all driven by the unique Helio P70 chipset. It’s without a doubt that after Helio P60 was introduced, MediaTek the company behind this great innovation gained a successful boost after launching Helio P70 September last year. So it’s not out of place to say the next generation of Helio P60 is Helio P70. However, when P60 was launched Snapdragon 660 was a close competitor as at that time. Smartphones powered by these chipsets performed remarkably well with their unique properties and affordable prices. Along the line, Snapdragon 660 began losing its standard and the quality however dropped. It was there and then the need to launch snapdragon 670 with more improvements arose and it turned out to pose itself as a challenge to MediaTek’s Helio P70. In this post, we’ll get to know which is more powerful. Let’s start the Snapdragon 670 vs MediaTek Helio P70 comparison.

The MediaTek Helio P70 incorporates four Arm Cortex-A73 2.1 GHz processors and four Arm Cortex-A53 2.0 GHz processors in an octa-core big CPU complex. Prior to comparison with the earlier released P60, Helio P70 speeds up by to 13% more in performance. MediaTek’s exclusive CorePilot 4.0 technology manages how tasks are assigned between processing resources, with a power management focus that’s on maintaining a sustainable, fast user experience through thermal management, UX monitoring and Energy Aware Scheduling (EAS+) are all possible as a result of its unique CPU processor.

MediaTek, the master-mind behind Helio P70 uses the latest TSMC 12nm FinFET production process, which is up to 15% lower power than other 14nm-class products.

On the other hand, Snapdragon 670 just like the old 660 have eight CPU cores however they’re in a better configuration when compared to the former. The Snapdragon 670 is the first chip in the series to have Kryo 360 cores, tuned by Qualcomm itself to offer better performance. Specifically, the Snapdragon 670 has two Kryo 360 Cortex A75 high-performance cores with a maximum speed of 2 GHz, accompanied by six other A55 cores at 1.7 GHz, dedicated to saving energy. Another interesting thing about snapdragon 670 is that despite the shift toward more low-power cores, the CPU performance is 15 percent higher in the new chip. That’s all thanks to the improved core design and the 10nm process and both clusters can be used together for a performance burst. 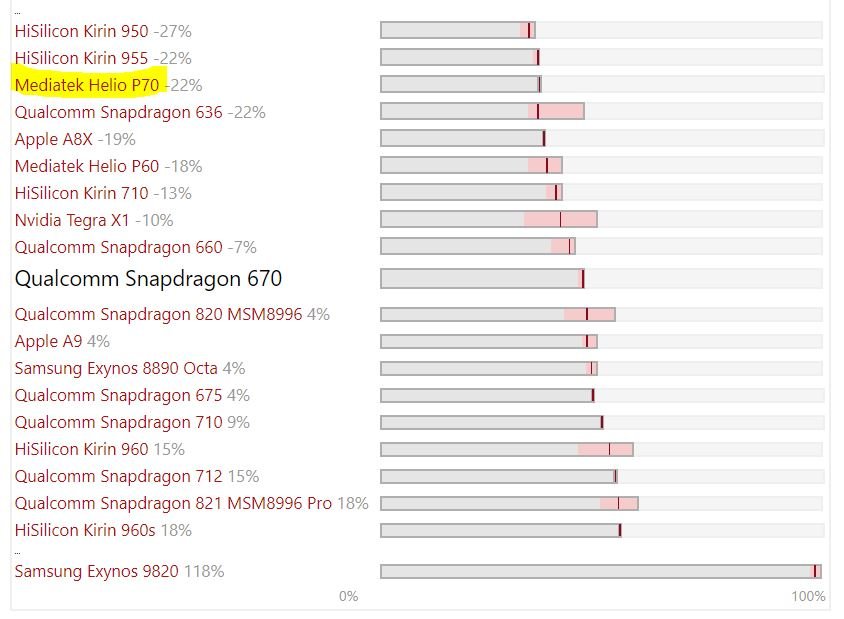 Comparing both SoC here, SD 670 turns to be slightly better in CPU performance thanks to the new Kyro 360 architecture and 10nm process. It proves that:

With an Adreno 615 GPU installed in the Snapdragon 670, it delivers console-like gaming, lifelike experiences, and stunning graphics, plus Ultra HD video capture and playback. All that, plus lower power consumption compared to the previous generation, a speed-boosting turbo function, and access to the latest graphics APIs all makes the Snapdragon 670 graphics experience outstanding. The new Adreno 615 GPU is about 25 percent faster than the old one. It uses the 14nm process.

On the other hand, P70 chipset has an improved Arm Mali-G72 MP3 GPU operating at up to 900 MHz. based on a 16nm process. Also, gaming becoming a common activity on the mobile MediaTek has used the Mali G72 MP3 GPU inside the Helio P70 to ensure low latency as well as great gaming performance.

Comparing Adreno 615 and Arm Mali-G72 MP3 GPU, Helio P70’s GPU turns out to be slighter lower than the SD 670 GPU. Even though Mali has better frequency remember that due to the 16nm GPU process, the GPU performance will decrease because of heat dissipation resulting in a lower frame rate. So considering gaming, the SD 670 is the winner here.

Since both SoCs are optimized for AI performance, Helio P70 has a multi-core APU operates up to 525MHz and combined with MediaTek NeuroPilot enhancements plus a new, intelligent multi-threading scheduler it delivers 10-30% more AI processing efficiency than the previous P60.

Whereas, the Qualcomm AI Engine on SD 670 fuels innovative on-device experiences, for smarter, more intuitive interactions with a 1.8x improvement over the previous generation. 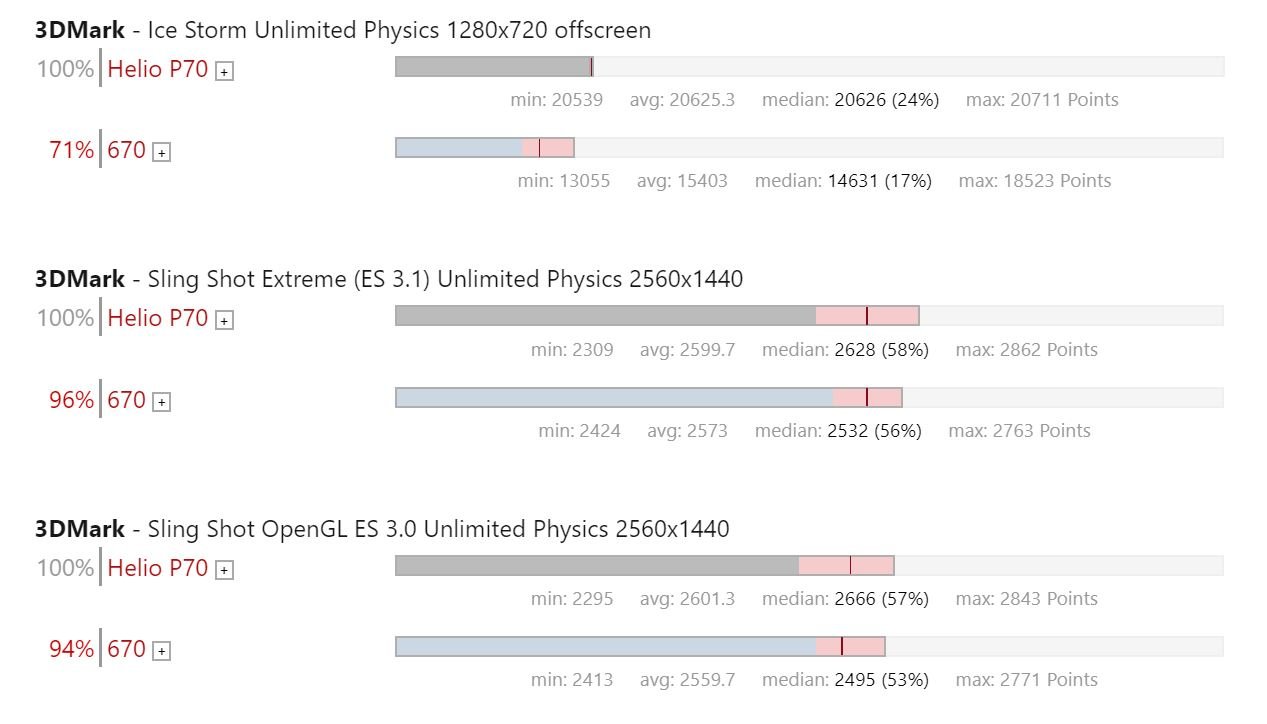 MediaTek has always been better when it comes to AI performance and this one is no exception because of the multi-core APU enhanced with NeuroPilot. Meanwhile, it’s Qualcomm first time to introduce the AI engine in 600 series.

Snapdragon 670 turns out to be slightly better in the CPU and GPU compartment. Meanwhile, Helio P70 is a clear winner in AI performance. Since the benchmarking and performance is judged based on process, CPU, and GPU, the Snapdragon 670 wins this one with a close call. If only the CPU and GPU processes (same as SD 670) would have been better, the case would have been different. In practical use, one will find Helio P70 much smoother and smarter than SD 670.