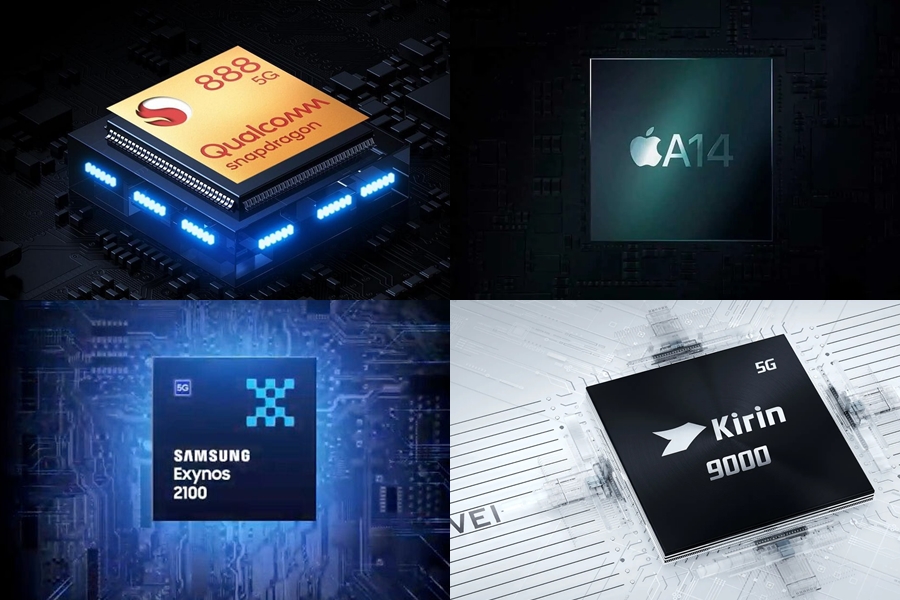 Qualcomm, Apple, Huawei, and Samsung are, without a doubt, two of the most popular technology-related companies in the world, not only because of the technology they bring to the light but also because they are available in a large number of devices in the market today. Due to their popularity, they have been compared many times, and today is no exception, as we are going to compare four of their most popular processors. Today we are going to see this Snapdragon 888 vs Apple A14 vs Kirin 9000 vs Exynos 2100 comparison, and we invite you to join us!

First off let us start with the process technology which determines the power consumption and performance of the SoC. Keep in mind the lower the number the better is the performance as well as battery life efficiency. In relation to this category, there is something incredible and that shows that the SoCs work in a great way and have great power, and that is that the four of them all have a 5nm EUV process, thus positioning themselves as four of the strongest processors on the market.

Getting to talk about the CPU inside these processors, three of them have something incredible in common, and that is that the Snapdragon 888, the Kirin 9000, and the Exynos 2100 all have a tri-cluster octa-core design CPU with a 1 + 3 + 4 cores configuration, while the Apple A14 has a dual–cluster 2 + 4 cores configuration. First, Snapdragon 888 is distributed as follows:

Next, about the A14 Bionic, there is not much information about it, although, at the time of its announcement, Apple did want to make it clear that it will have a dual–cluster design (2 + 4), which could be similar to the that can be seen in the A13 Bionic, is the following:

Now, On the other hand, Kirin 9000 is distributed as follows:

Last but not least, we have the Exynos 2100 that is distributed as follows:

As you can see, some of these processors have not only the same number of cores, but also have the same type of core as well. Having said that, everything is based on the speed at which these work, and although it is not such a big difference, the speed at which the CPU of the Exynos 2100 works is higher than that of the rest of the processors, this being the which has the highest power.

Turning to talk about the GPUs that are inside these three powerful processors, in terms of graphical performance, Snapdragon 888 upgrades to Adreno 660. It’s 33% faster than the previous generation and 20% more power-efficient.  For the improvement in the gaming section, we also see the 3rd generation of Snapdragon Elite Gaming along with HDR10+ support. Then, the A14 Bionic has an Apple-designed four-core “Apple A14 Bionic” graphics processing unit of which we still do not have much information.

Following, we have the Kirin 9000 that features the ARM Mali-G78 GPU, which works with a 24-core version, being stronger than the 22-core version seen in the Kirin 9000E. Lastly, we have the Exynos 2100 that also has the ARM Mali-G78 but in a version with 14 graphics engines with which they promise a 40% improvement compared to its predecessor. The new ARM Mali-G78 is capable of supporting the Vulkan and OpenCL APIs, in addition to the experience with augmented reality, virtual reality, and mixed reality.

Now, and while both the Kirin 9000 and Exynos 2100 have one of the best GPUs on the market, the force with which the Snapdragon 888 works is almost insurmountable, so in this category, the processor made by Qualcomm has the winning place.

About the Exynos 2100, it still does not have an official score on AnTuTu, although judging by the specifications it has, it will get a very high score.

Talking about connectivity, Qualcomm’s first integrated flagship 5G SoC is used inside the Snapdragon 888, which is the Snapdragon X60 5G baseband, which has a max download speed of 7.5Gbps and a max upload speed of 3Gbps. The official claims that the 5G baseband is superior in comparison to Apple’s A13 Bionic. Also, the new FastConnect 6900 system enables Wi-Fi 6 and can reach speeds up to 3.6 Gbps. The officials claim that speed is the highest in the mobile WiFi industry. The 6E standard also offers lower-latency, a boon for streaming games from a local PC (or the cloud, there the 5G modem can help as well).

Next, there is not much information on this topic about Apple’s A14 Bionic, but it is known that it will support 5G technology. Moreover, there’s the 4G LTE modem present continued from Apple A12 and it also has dual-band Wi-Fi, Bluetooth 5.0, USB 3.1, and types C, NFC, and GPS.

On the other hand, the Kirin 9000 features the industry’s first 5G quad network synergy technology. This technology is capable of efficiently integrating WiFi at a frequency of 2.4GHz, WiFi at a frequency of 5Ghz, a 5G main SIM, and a 4G secondary SIM, thus not only providing high aggregate network speed but also providing low stable low time changing network conditions and network optimization or simultaneous download.

Lastly, in terms of connectivity, and as can be seen in the Qualcomm processor, the new Exynos 2100 has the 5G modem in its structure. This modem is capable of supporting sub-6GHz and mmWave spectra from 2G to 4G LTE, giving a maximum download speed of 5.1Gbps and up to 7.37Gbps in mmWave, thus achieving up to 3Gbps in the case of 4G networks.

Finally, to see what is the best option among these processors at the budget level, we have to know the price of the phones they are on. About the Snapdragon 888, we can find it on the Xiaomi Mi 11, which has a selling price of around 615 USD. Concerning the A14 Bionic, this processor is available inside the iPhone 12 Pro Max which has a price of 999 to 1049 USD. Then, the Kirin 9000 is inside the Huawei Mate 40 Pro which has a price of 1,398 USD.

Select Snapdragon 888 if you want:

I hope you loved this Snapdragon 888 vs Apple A14 vs Kirin 9000 vs Exynos 2100 comparison. Which one is your favorite SoC? Let us know in the comments.