Yesterday, Xiaomi released the latest version of MIUI known as ‘MIUI 10’. And we already have the top  5 Features of MIUI 10. MIUI 9 is known as ‘fast as lightning’, however, the new MIUI 10 is ‘faster than lightning’. Xiaomi this time focuses on providing the best full-screen experience on Android. The MIUI 10 China ROM update will be available in mid and late June. It already released today for the closed beta members. So, without any further introduction, let’s review the top 5 features of MIUI 10.

As we teased a little bit at the start, you knew that this feature would be coming. This is 2018, the era of multiple cameras and full-screen smartphones is already on the horizon. So why not Xiaomi make the UI the best to provide a true full-screen experience? This means, that we can finally say goodbye to that annoying Black/White Navigation Bar. If you want to retain it, just turn the full-screen gestures off.

The full-screen gestures were introduced recently in MIUI 9 update specifically for Redmi Note 5, Redmi 5, Mi MIX 2 and other full-screen flagships. The gestures were limited but were super easy and fun using when bringing to action. After a great response from the users, MIUI developer reshaped the feature on a whole new level and brought it on the MIUI 10 platform. While MIUI 9 full-screen gestures supported only full-screen Xiaomi flagships, but it looks like that MIUI 10 might break the limit, and provide the full-screen gesture feature to the old 16:9 smartphones such as Mi 4 series, Redmi 3 and Note 3 series. If so, these old flagships might take advantage of both the traditional LED buttons on the front chassis as well as those smart swipes and taps on the screen.

MIUI 10 Truly Provides the Best Full-screen Experience Even to the Old Xiaomi Phones and Says GoodBye to That Black/White Navigation Bar!

Here’s how the gestures work:

The new MIUI 10 system is pure AI (Artificial Intelligence). The system is able to become smarter and faster than MIUI 9 thanks to the AI preloading. So what is AI preloading? Well, the system gets used to your behavior. It firstly monitors which app or task you do the most frequent or in sequence. After that, it learns and anticipates your behavior, so that the application you want to open will start instantly without waiting for one second. In simple words, the system already knows which app you want to open and already starts it in the background without even noticing you. Scary but amazing! 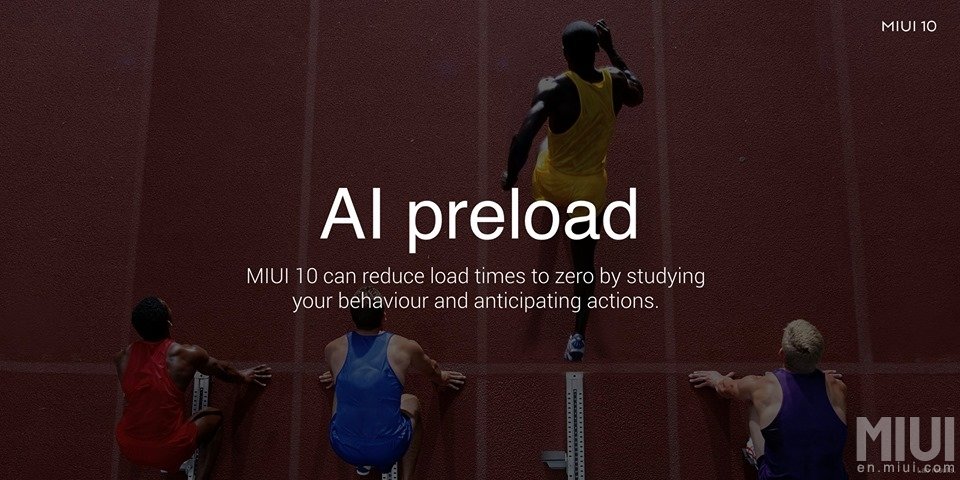 The MIUI 10 Studys The User’s Behavior and Anticipating Actions. It already loads those apps in the background and reduces App Loading Time to Zero

After MIUI 10 was blessed with AI, the boot-time was greatly improved. According to tests conducted by a third-party app; the Wilco Communications Laboratory’, in the MI MIX 2S vs iPhone X vs Huawei P20 start-up speed comparison, Xiaomi Mi MIX 2S boot speed was 1.375x better than iPhone X and 8.5x better than Huawei P20.

That’s not all! Artificial Intelligence platform isn’t mainly about how fast it is. The priority of its existence is to make the phone easier to use. For that, MIUI 10 integrates Xiaomi’s own Smart AI voice assistant known as ‘Xiao AI’. The user can do almost every task on the phone with the voice assistant. In other words, you can operate the whole phone without even touching it, as long as you are a Chinese. Because the downside of Xiao AI is that it’s only available in China ROM and supports Chinese language only. MIUI is already working to provide it on a global use supporting multi-languages. Interestingly, Xiao AI users have already exceeded 22 million. Through Xiaomi’s collaboration with other Xiaomi partners like Amazfit, Mijia, and others, the Xiaomi’s voice is growing.

MIUI 10 has also joined the exploratory voice driving mode, in which you can send and receive information via voice, call, navigation, and song. Pretty much similar to voice assistant.

Instead of using those annoying instrumental sounds, the new MIUI 10 collects the sound of nature. The nature sound effects scientifically provide a mind soothing, peaceful, and refreshing effect. For example:

Apart from these, the system has a built-in dynamic wake up bell. In fact, MIUI users will now have their own friendly voice broadcaster of weather and air index. Similar to Windows 10 starter, you will get a warm welcome from the OS itself with the new greetings. You can download the official ringtones of MIUI 10 from MIUI forum.

This one is the best feature in our list of top 5 Features of MIUI 10. Why? Well, AI bokeh effect or background blurring has always been a selling aspect of smartphones. In fact, we see smartphone manufacturers even mentioning it in their flagship promos. However, MIUI 10 proves that one might not need a dedicated dual camera lens or hardware to achieve the Bokeh effect. It’s all about algorithms and software.

MIUI 10 provides professional-level background blur or Bokeh effect to every supported Xiaomi smartphones. In those 32 Xiaomi flagships, some only have a single camera while some are too old that when they released Bokeh effect wasn’t trending those old days. MIUI 10 provides that background blurring effect to those 2-3 years old models like Redmi 3 series, Redmi Note 3, Mi 4 series, and Mi 5. For the users using these phones, you just got yourself a treat!

MIUI 10 Breaks the Limit and Provides Background Blur (Bokeh Effect) as well as AI Potrait to Even Single Camera Flagships Which Never Had This Feature.

5) The All-New Simple Yet Elegant UI

Last but not is the new UI. No doubt, it’s the most comprehensive and simple UI to date. Like previously said, the UI says goodbye to the black bar. So no more annoying touches while playing games or doing any task. The full-screen gestures have brought into action. The icons, the status bar, the home screen, the lock screen, everything has been completely redesigned. The notification and weather section has become completely transparent from the colored.

The most noticeable aspect is the recent apps screen. Rather than simply showing a list of screens on one column like in MIUI 9, the new recent maximizes screen space of 18:9 phones, and display hundreds of full-sized screens on two columns. Swipe to remove them, touch to enlarge them, and long press to go to more options.

You can notice a small bar of voice recognition at the left bottom visible when the voice assistant or driving mode is turned on.

In terms of IoT interconnection, Xiaomi already has more than 100 million connected devices. When MIUI 10 Xiaomi phones are close to connectable devices, they will promptly remind the user to quickly connect to the device or not. The user can easily control that device without installing any additional app.  It will also alert the user to any unusual changes or completed tasks.

There’s a complete dedicated screen given to the IoT interconnection. Just swipe to right on the home screen to view it.

Xiaomi IoT and its more than 590 eco-chain brand smart appliances are gradually being integrated into MIUI 10, and there will be more smart device manufacturers in the future. Previously, Xiaomi AI Smart Speaker was the brain of your home, but it looks like a Xiaomi phone will be the next brain.

Hope you liked the top 5 features of MIUI 10. You can click here to see which Xiaomi smartphone supports MIUI 10 platform (China ROM). Let us know the things you like and dislike about MIUI 10 in the comment section below.