The Ulefone Power Armor 18T 5G is one of the latest rugged phones on the market. The phone to date is the best spec’d rugged phone available. A 120Hz display, 108MP camera, 9600mAh battery which supports wireless reverse charging, all three certifications (IP68, IP69, and MIL-STD-810G), and a Dimensity 900 SoC with 12GB RAM and 256GB storage. With the improved 1.5-meter drop proof because of the addition of Gorilla Glass 5 and a Usmart expansion connector, it has become adventurers’ favorite phone.

This phone literally solved the problem of bringing another high-end non-rugged phone along the trips, since rugged phones aren’t that well-spec’d. 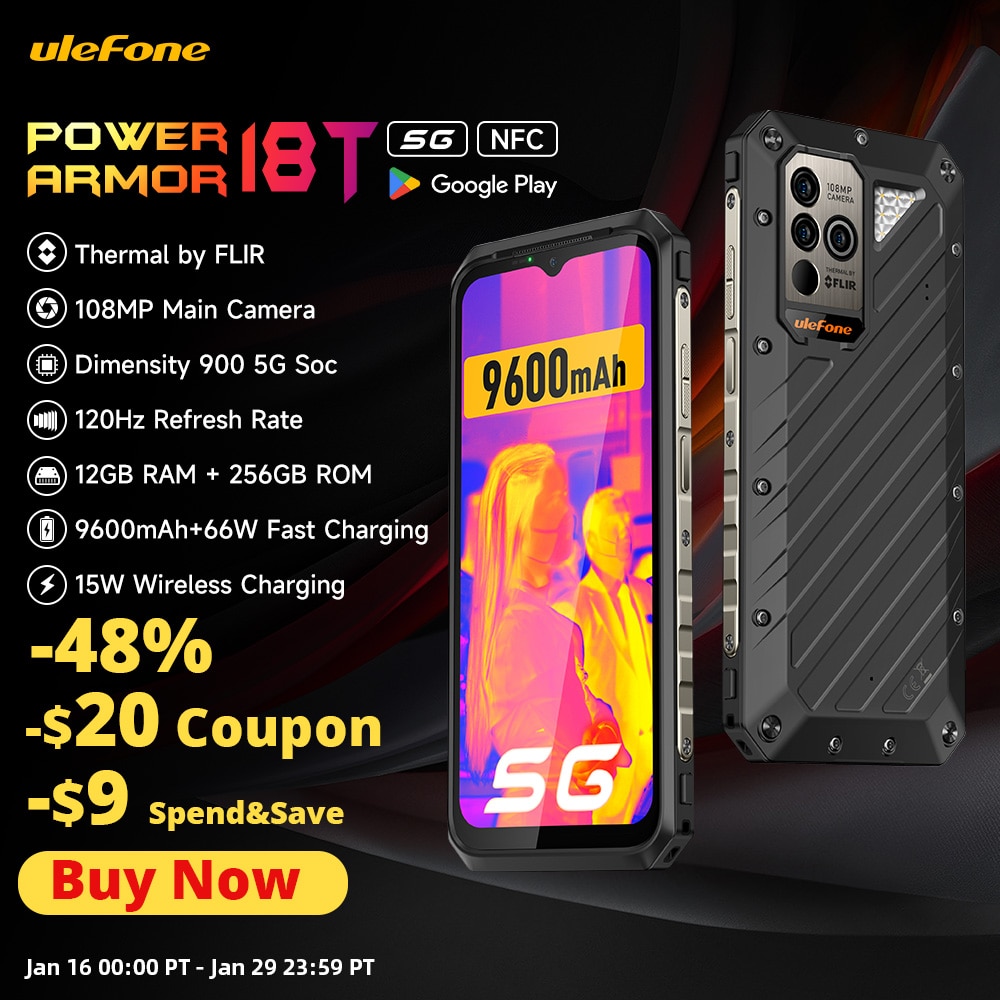 Let’s dive into the details, and know the phone better:

Being a rugger phone, it is not surprising that it has a powerful and high-quality body. This one is made of a combination of polycarbonate, TPU, and metal; it is surrounded by a metal frame, while the back cover is covered by TPU, which is secured thanks to the use of screws. Having said that, this combination results in a bit of a heavyweight and a thicker body.

On the back, there are the three main cameras and a thermal module, accompanied by the company name.

On the other hand, on the front side, there is not only the usual protective film with the selling points of the device, such as the 108MP main camera, the thermal camera, and the Dimensity 5G chipset but also the frontal camera.

Probably being the first feature seen on a smartphone, it’s time to talk about the screen. This device features a 6.58-inch IPS LCD capacitive display, which would be a 71.4% screen-to-body ratio. This features a 120Hz refresh rate, in addition to 1080 x 2408 pixels’ resolution.

One point in favor of this choice of display over other rugged phones is its refresh rate since it’s common to see a rugged phone coming with a 60Hz, but few reach 120Hz.

This display is covered by Corning Gorilla Glass 5 protection, which is damage and scratch-resistant.

Being the most popular and most used of them all, and being the most used when looking at the power that any smartphone has, on AnTuTu, this Ulefone smartphone scored an overall score of 481,863 points that, although it is not the best result ever seen, it is still a very good score.

In relation to this section, this phone has a configuration of three rear cameras: a 108MP main lens, a 5MP macro lens, and a 5MP thermal module.

First of all, the main camera consists of a 108MP Samsung S5KHM2 lens, with f/1.9, 1/1.52” optical format, PDAF, and support for 9-in-1-pixel binning. This lens has been seen in other mid and high-end devices, so it is not surprising that it brings excellent quality; the way it is made gives it the ability to take images with a good color resolution, good contrast, and massive light with pretty decent noise control. It is worth noting that it supports 4K video recording.

Then there’s a 5MP Samsung S5K5E9 macro lens with f/3. This lens has a special feature, and it is that it has 60x Super Magnification technology, being able to capture objects with enormous detail both in places with a lot of light and with little light.

Finally, there is something interesting, a 5MP thermal module that includes a FLIR Lepton 3.5 sensor with a 160 x 120px resolution. Basically, this lens detects objects based on their temperature, which can go from -10°C to 400°C, being able to work with a huge range. It is worth noting that this specific lens works hand in hand with an application pre-installed on the device, which allows you to configure the lens as required.

On top of that, there’s the Samsung S5KGD1 32MP front-facing selfie camera. This is capable of obtaining high-quality images in moments with a lot of little sunlight, in addition to being capable of supporting up to 1080p video recording at 30 fps.

In order to check the way in which the cameras of this device work, you just have to look at some of the images that it is capable of capturing, especially on days with a lot of and little sunlight.

Being what gives it power, a smartphone’s battery is one of its most important points. In the case of the battery on the Ulefone Power Armor 18T 5G, is a huge Li-Polymer 9600mAh battery. With sources like Gizmochina, this device is capable of reaching up to 39 hours of calls, 10 to 12 hours in normal use, in addition to an incredible 524 hours of standby mode.

Also, and as if that were not enough, this battery has support for 66W fast charging, which, according to the company, charges the battery to 52% in just 30 minutes, in addition to 15W wireless charging and 5W wireless reversed.

The phone has a ton of cases with it including an endoscope for medical diagnosis. There’s the usmart expansion connector which can be used to connect the endoscope and microscope (both sold separately).

Just as could be seen with the case, the screen protector has the same purpose. The display of this device is of high quality, however, extra protection is always a good thing.

Although the body of a rugged phone is specially made to withstand bumps and more, the reality is that a little more protection never hurt anybody. And it is because of this that this device comes with a special case, thus providing even more power and protection.

On top of that, this case not only works as protection but also features a carabiner and a back clip that can be rotated 90 degrees to the left or right.

Although the battery of the device is one of its most important points, its charger is also. This Smartphone comes with a 66W fast-charging charger, capable of providing a very short charging time.

What would a charger be without its respective cable? This one in particular has an incredible feature, and that is that it is not only of great quality but also has a great length.

Another unusual accessory is the digital microscope which can connect with the phone thanks to the Usmart expansion connector.

This is a bit of an unusual accessory, but one that is extremely useful, especially for a phone made for the outdoors. The endoscope, connected to the smartphone, can allow you to view narrow and deep places. This can be used as a medical diagnosing device.

Ulefone marketed Power Armor 18T 5G as a high-end phone. Since it’s a rugged phone with specs too rare to find in a rugged device, the company has marketed it for around 640 USD.

Special Offer For The US Audience

Aliexpress is providing free shipping which takes only 3-5 days to deliver this phone anywhere in the US. Moreover, the price has been reduced to $515 as well.

We hope you now know everything about Ulefone Power Armor 18T 5G smartphone. Do you think this phone is the perfect phone we have been waiting for? Let us know in the comments.