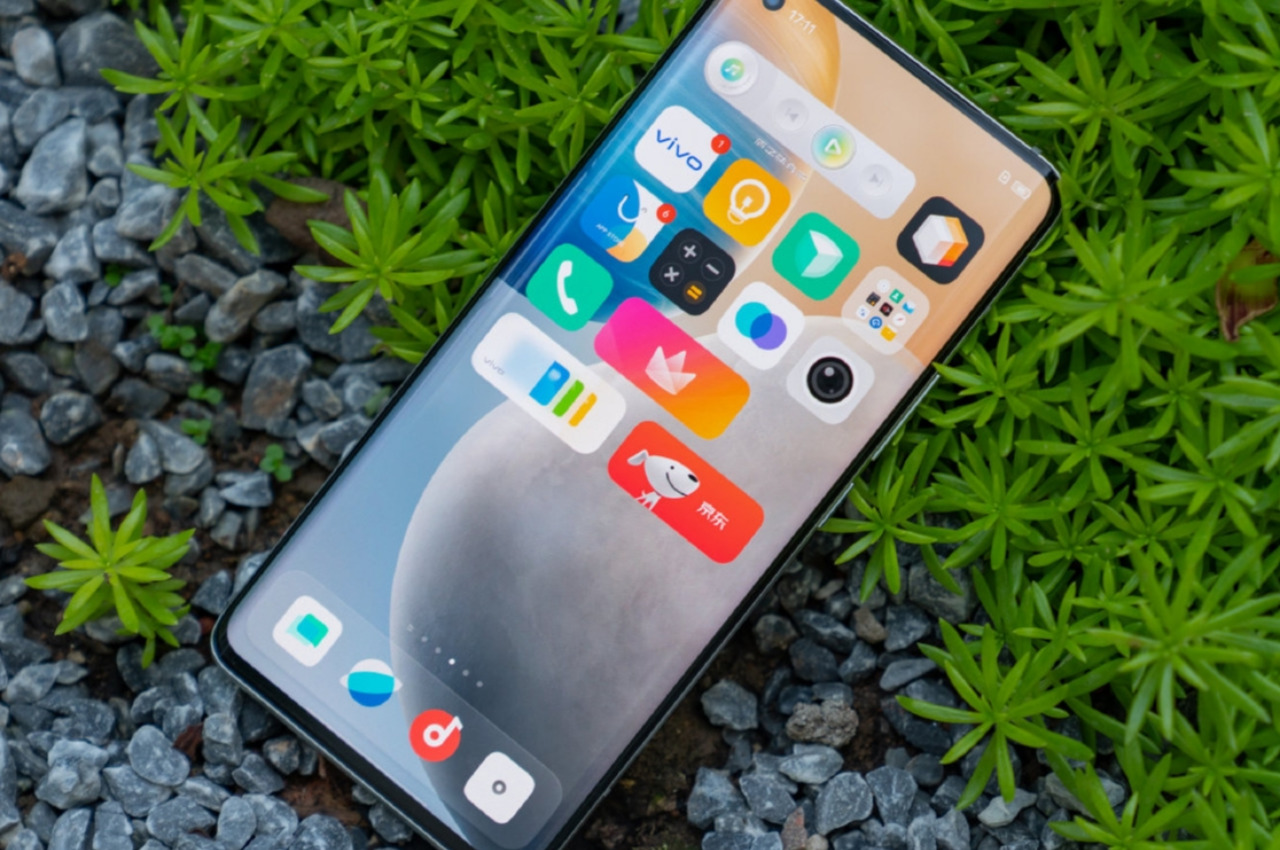 Just a few days ago, the international company, Vivo, decided to surprise its users around the world with its new user interface for smart devices, the Vivo Origin OS, and it is that the same company explained, with pride, that they hope to use it for creating a whole new digital world. Today we are not only going to talk to you about it, but we will also give you the list of devices to get this update in this Vivo Origin OS Review!

It is worth noting that this OS is only available for Vivo devices in China and, although a worldwide release is planned, the global release is still in question. 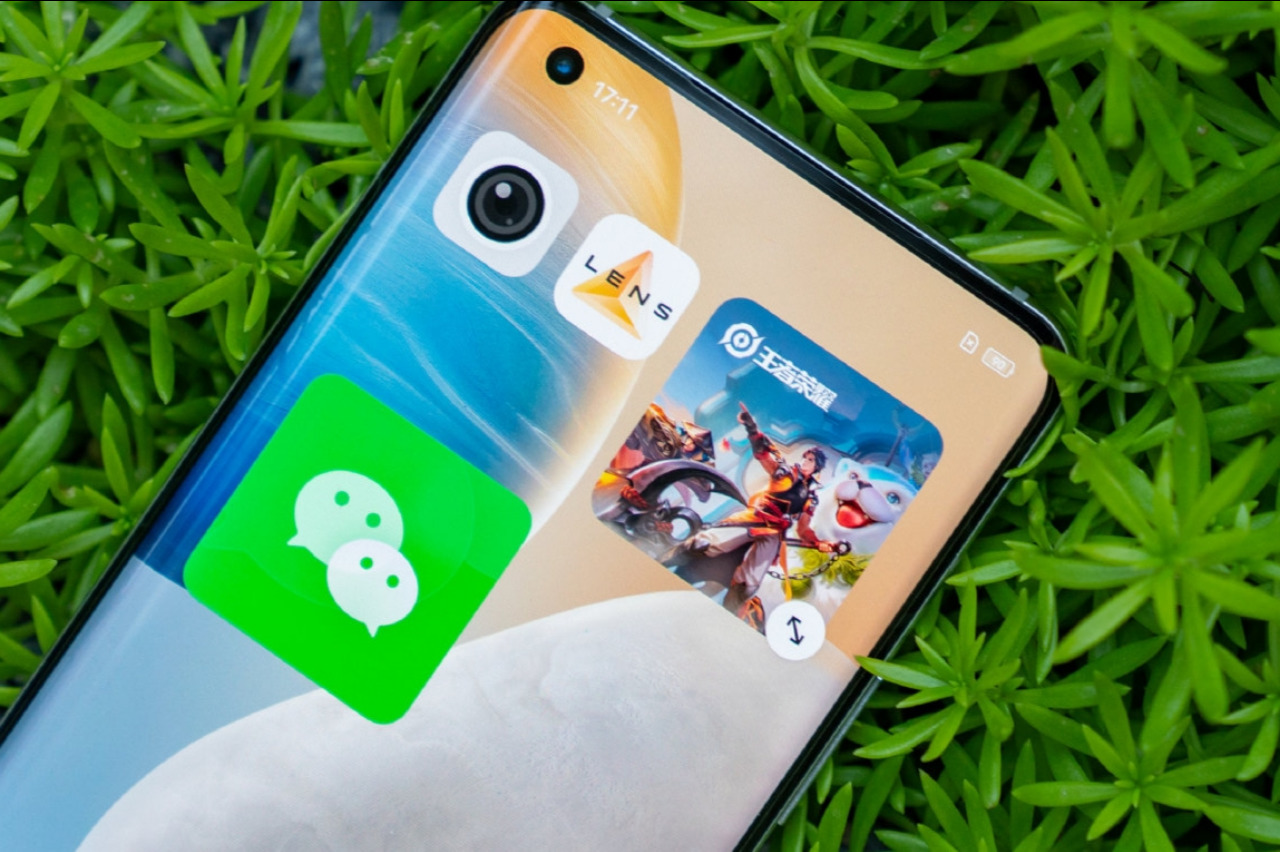 Starting this Vivo Origin OS Review, in relation to the design of this new interface, and being one of the most important parts for users, the same CEO of Vivo commented in the official Origin OS presentation that a new studio and team were formed specialized for the creation of this project. This new interface is committed to a new design of desktop for the phones, thus having a new system of grids or widgets, being a bit similar to the one that can be seen in Apple’s iOS 14 launched this year. In short, it is a design that allows comfortable use of the interface of the different devices. 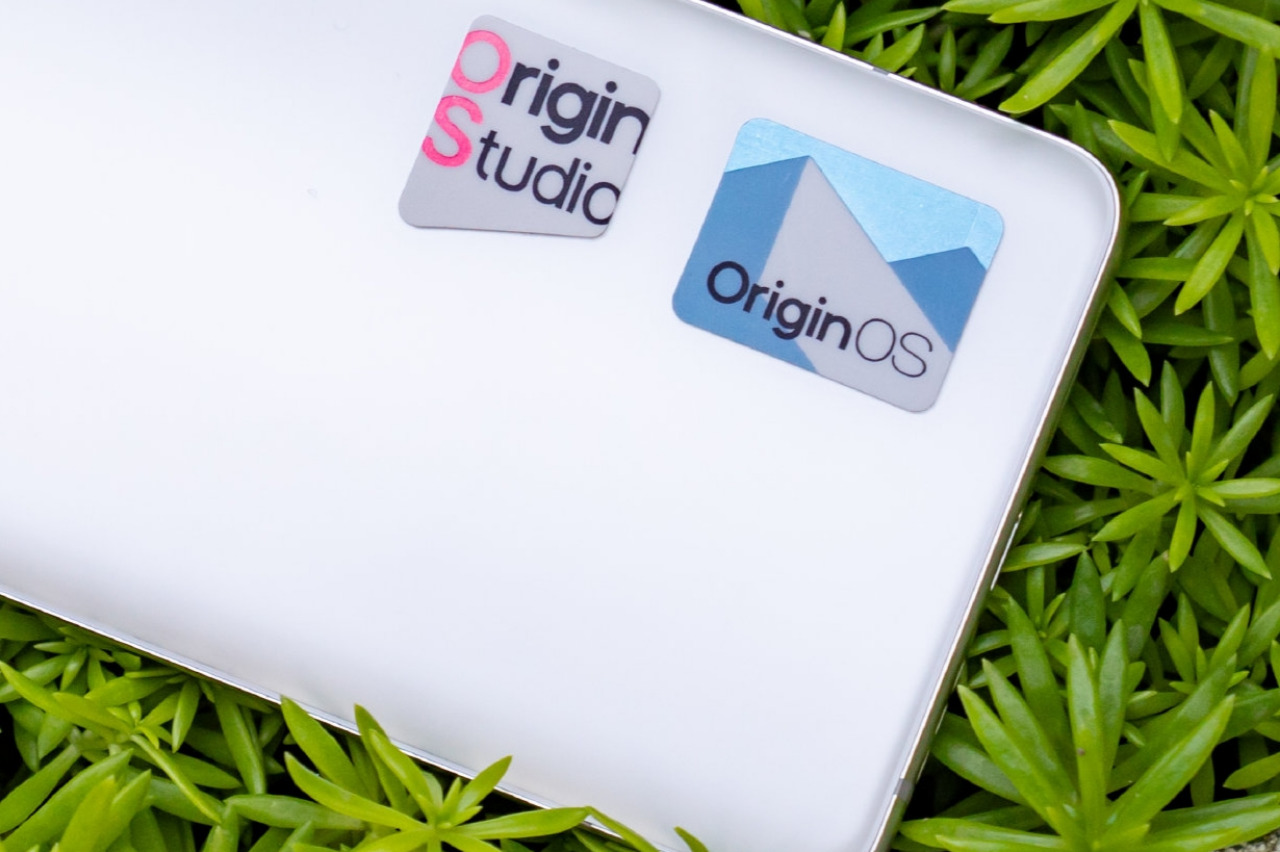 Having said that, and being one of the points in which Vivo decided to focus more on the presentation event, the company also decided to introduce a new way of displaying the weather information in this new user interface, since it decided to bet this time by a design with temperature lines, where colored lines will be displayed to facilitate the perception of the user when reading the current temperature of the place where they are. Also, the weather conditions at that specific moment are shown, and all thanks to a special animation that is made to attract the user’s attention.

As can be seen in this Vivo Origin OS Review, and in a nutshell, the new Origin OS is presented as an interface created to resemble as much as possible the current tastes of users around the world, thus counting a modern design and that allows great customization by the user. Due to this, the comparisons of this with the famous iOS will be many, since it is true that there are many similarities between it as well as others that are also on the market, but the quality of this new Vivo OS is top. 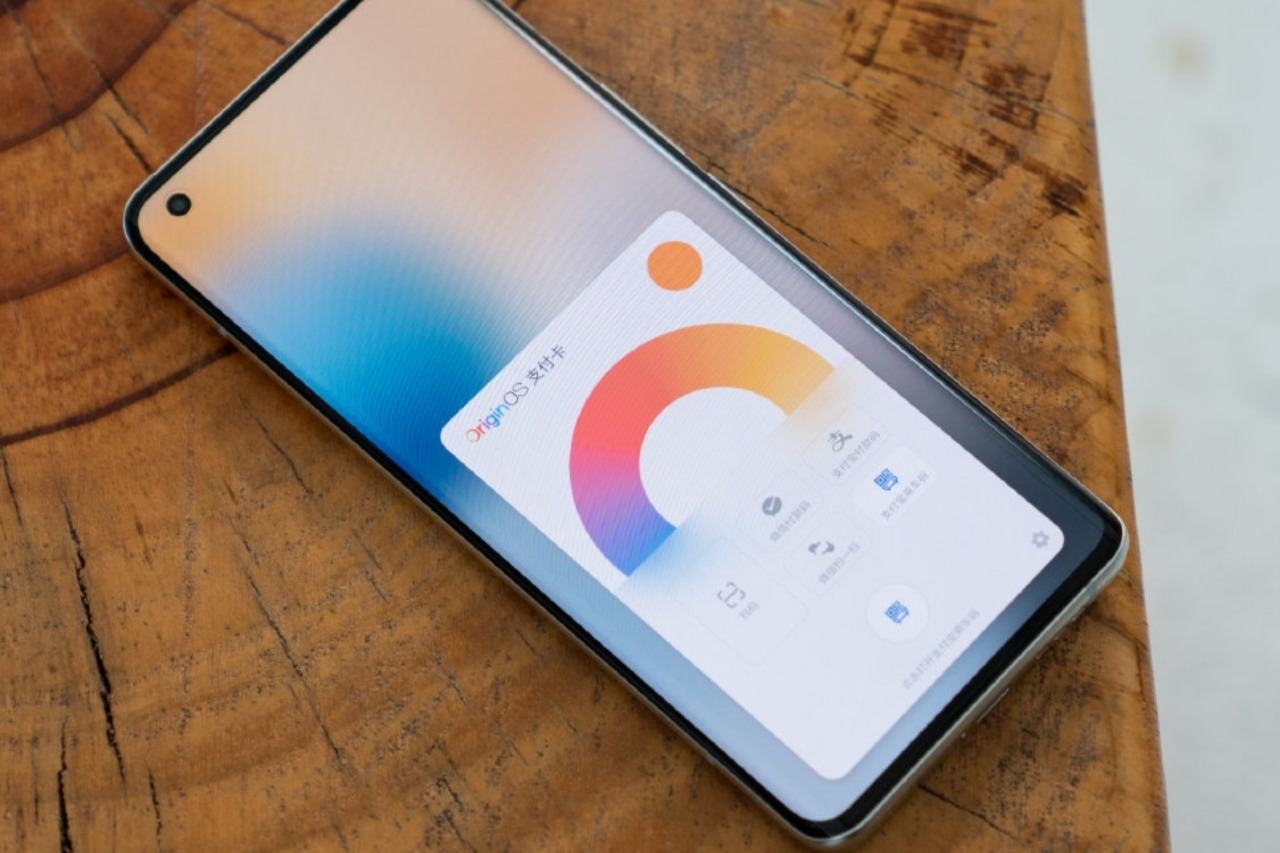 On the other hand, talking a little about the icons that they will have, users will have the possibility to organize the icons on the screen individually, as well as combine or group them in one of those widgets that are on the screen depending on the user tastes. Each of these may vary its format or position, and all due to the fact that some are oriented vertically and others horizontally, as well as their sizes can be modified. It is worth emphasizing that the user will be able to adjust these aspects to their liking whenever they want or need it.

In addition to that, there are also animated wallpapers that will be integrated with the passing of the months, in addition to which these will be modified with the behavior of the weather, as well as changes in the sun and moon. Also, Vivo has opted to use funds with flowers (with 7 types in total), so that the growth process of said flower can be seen until they bloom as a background. Likewise, the brand allows users to freely change the wallpaper, as well as the icons and the desktop style in a small window, thus having greater customization at all times. 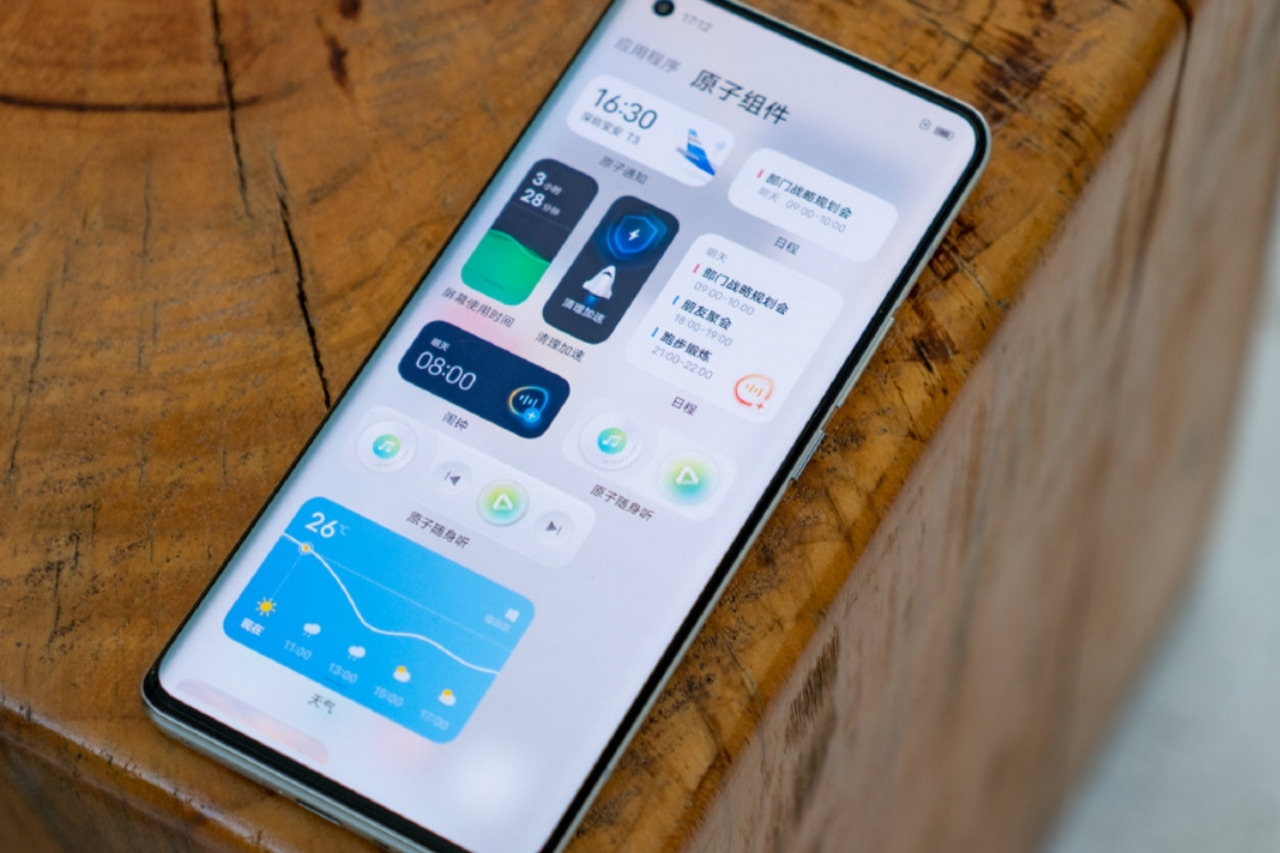 Before this new interface, the devices under the name of Vivo were working with the Funtouch OS, which, although at the time it was one of the best interfaces on the market, the hard reality is that times change, and updates to this were lagging a bit behind compared to those of other companies. Vivo, realizing this, decided to place itself far ahead of its competitors, and not by updating its interface, but by creating a new one. Ultimately, this was the best decision the company could make, both in the short and long term. 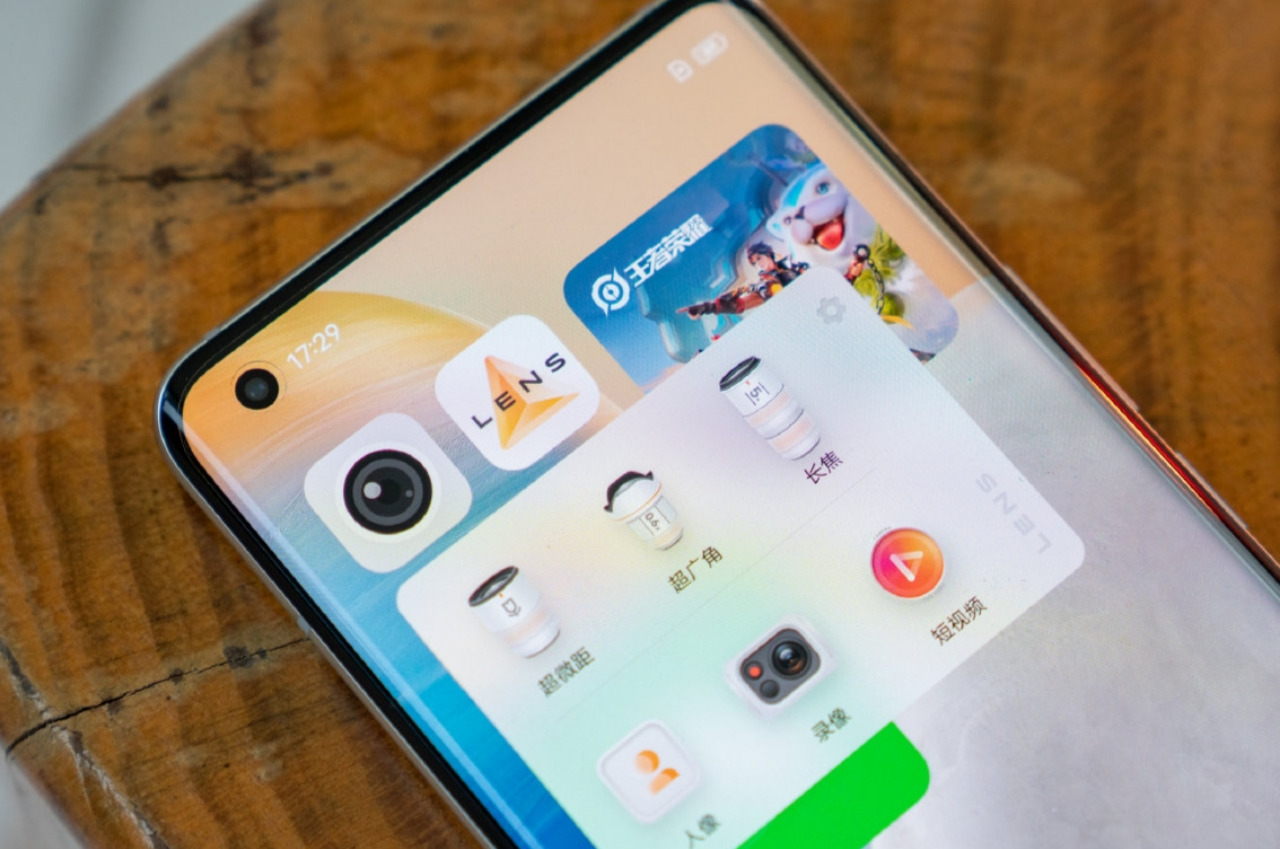 Due to the fact that the same company affirmed that this is a new digital world for its devices, it is not surprising to see that, in a magnificent way, not only was another style very different from the one already being used but also it was able to show the company’s new and great ideas and complete solutions to improve 100% the interaction that the user has with the interface based on the Android system.

Very recently, the Vivo iQOO7, introduced just two months ago, was officially upgraded to Origin OS, and added a “for iQOO” suffix, which seems to be a special customized version and, due to that, many of the users began to wonder what were the differences between this special version and the normal version of the OS.

Although it is true that these two versions are a bit different, it must be clarified that, since they are the same OS, they have characteristics in common. Like the original Origin OS, this new version’s main interface UI adopts the “Huarong Grid” design that breaks through the traditional framework of Android. Likewise, the user can customize the size of each icon according to its own preferences and customize the most efficient arrangement and combination. Also, the desktop that is used to the original version of Android can also be switched back with one click. 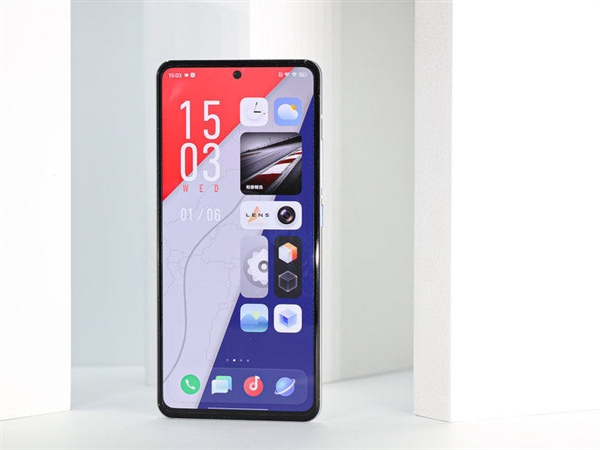 On the other hand, on the desktop, the user can also add some atomic components, this being compared to the traditional Android widgets, adding interactive features, such as setting the alarm clock, schedule, check weather, flights, express delivery, and many more things. Also, this can help the user to quickly switch between multiple audio applications, and clicking to expand can also show the currently playing tracks. Likewise, the lens package is also available, which can help the user to solve various problems that have to do with the functions of the camera.

Now, by default but being an upgrade to the OS, you can swipe left from the bottom right corner of the screen to bring up the “Super Card Pack”, which can provide quick access to open the scan code and the WeChat and Alipay payment code. If necessary, you can also configure the pack card to open when the screen is off or locked, to enter immediately after unlocking the device. 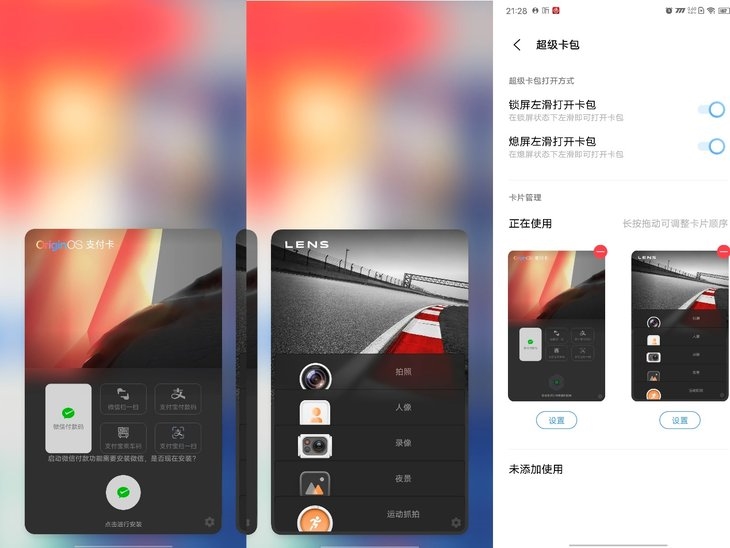 And is worth mentioning that Origin OS finally supports the drop-down menu to call the notification center from anywhere on the desktop, rather than being pinned as a search. In addition, it also improves the problem that the original Funtouch OS or iQOO UI only supports the small window of the information application in the game, and that is now, most mainstream applications can call the small window mode.

Exclusive features of the iQOO7

As mentioned above, users who have an iQOO7, in addition to receiving the Origin OS, a “for iQOO” suffix appeared, assuming that it is a special customized version for this phone, so, although it has general characteristics of this OS, it also has special characteristics. The most notable is undoubtedly an iQOO console, through which animation, performance mode, refresh rate, and network can be quickly changed, making it more convenient to configure the phone for users who love video games.

In addition, iQOO7’s unique behavioral wallpaper can no longer only be feedback based on the number of steps, but can also be freely adjusted to the volume and brightness of the screen. 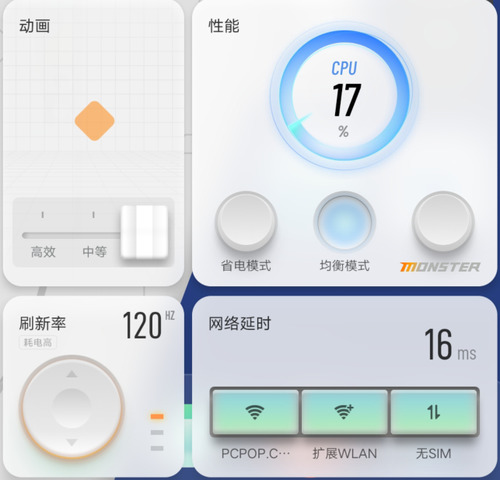 On the other hand, restoring old photos is a new feature of the photo album app. It can use artificial intelligence algorithms to restore some black and white photos to the higher definition and perform intelligent recognition and coloring, plus it can also be seen to restore skin and character color more naturally, thus being a rather surprising effect.

In this specialized version, the game box has also undergone major changes, and the first thing you can see is that the interface has become more in the style of e-sports. Also, it is capable of displaying information in real-time, as well as the operating frequency of the CPU and GPU, the duration of the game, the power, and more adjustable functions.

In addition to the screen pressure and vibration of the 4D game supported by the iQOO7 hardware itself, the new version of the game box also brings a new screen control panel. Players can choose between performance and image quality, and solve part of the image quality of the game.

While we are talking about a specialized version for the iQOO7, it still has flaws like all OS. First of all, regarding the notification messages, although it supports the folding of several messages in the same application, there is still no level of importance, and it is that only the “not important” messages can be set to “silent” without reminder. However, it is commendable that the “under developer options” notification can finally be removed directly.

The second is the function to improve is the small window. There are currently two small windows available in Origin OS: one is to press and hold the application icon in the drawer and drag it to the upper right corner of the screen, while the other is to select the small window above the multitasking card from the app as in the split-screen above. The truth is that these two methods are difficult to operate with one hand, so it would be good if these functions were improved for easier access.

On the other hand, like some third-party Weibo clients, app stores, and game strategy wizards, small windows are not yet available for niche software that is difficult to account for; Having said that, the video player software can only support portrait screen, but cannot click for full screen. In addition, its smart screen recognition and price comparison feature should also go to the browser instead of opening a small window in the application, resulting in the need to repeatedly switch applications during the price comparison process.

At this point, the new Origin OS is already more than official, thus being the new pride of the company. It is the successor to Funtouch OS, present until now in Vivo mobiles. In a few words, and seeing everything that it can offer us, this new interface has a better design, an interface with a faster operation and that turns out to be easier to use compared to its predecessors, all these aspects being what users were asking the manufacturer in various surveys, which were already answered, and in the best way possible.

List of Vivo Devices & Smartphones To Get Origin OS Update

The list of devices and smartphones that are preparing to obtain this new interface is very large, and due to its length, it must have been separated into three, depending on the time of year in which it will be launched. The first list shows the first batch and has the devices that will get to Vivo Origin OS before January 2021. The devices are the following:

On the other hand, the official second batch will get to this interface before the Spring Festival (Mid-February), and according to the information available to date, the devices that will be available with this interface will be the following:

Finally, the third batch will obtain it in the Q2 2021 (from April 2021), and it consists of the following devices: