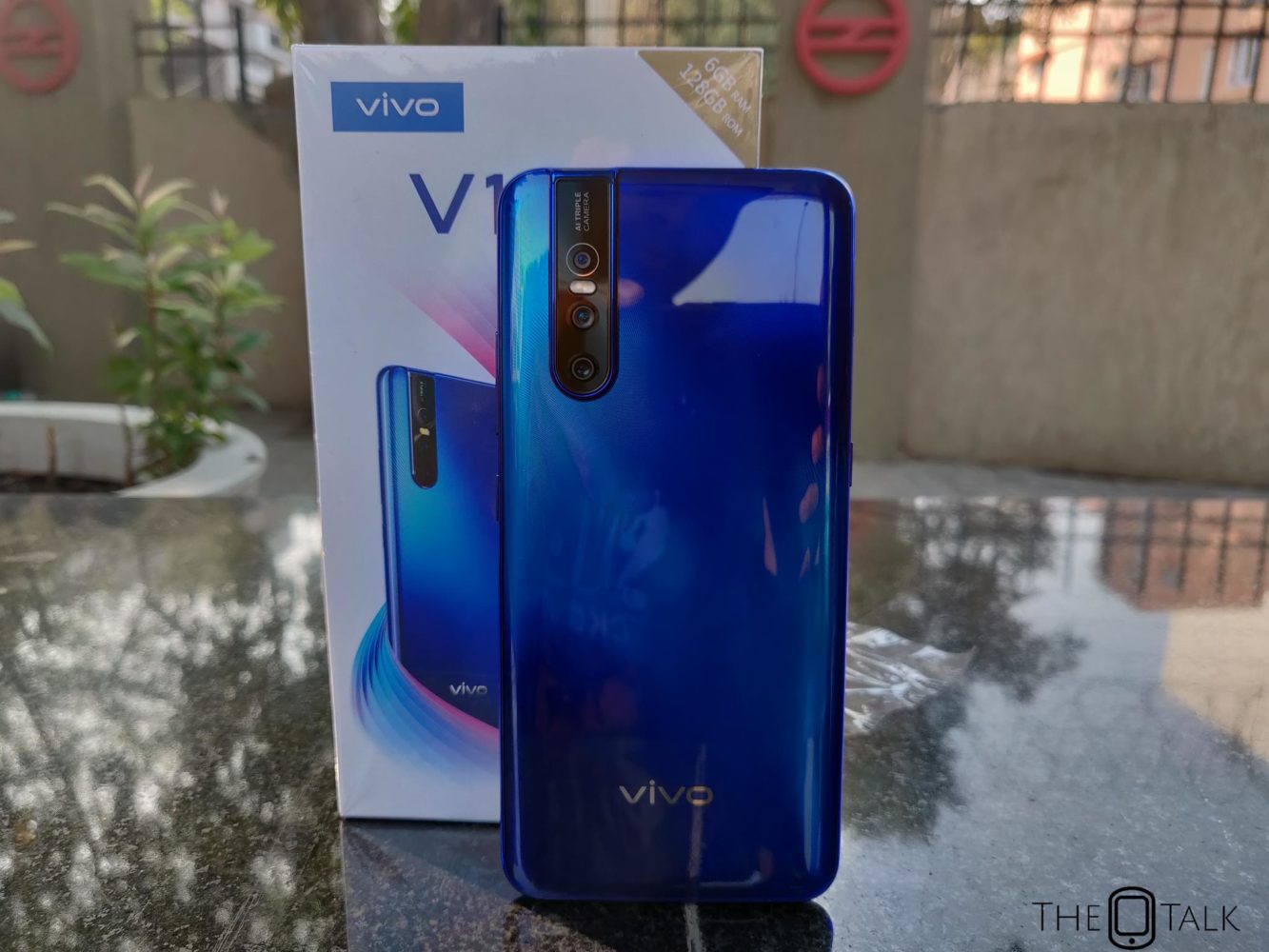 Vivo’s latest flagship known as ‘Vivo V15 Pro’ might be difficult to the category in a mid-end smartphone (upper mid-end tier) concerning the Rs.28,990 INR (408 USD) price tag. However, at the same time, the flagship boasts about features which you typically witness in a high-end flagship such as the under-display fingerprint reader, triple rear camera, hidden front camera, and the ‘almost bezel-less’ display. Looking at this, in this Vivo V15 Pro review, our main concern is to find if the smartphone is worthy of spending that much money. Why? Because there are smartphones out there such as Redmi Note 7 and upcoming Redmi Note 7 Pro which can give this flagship a tough time at a much better price. 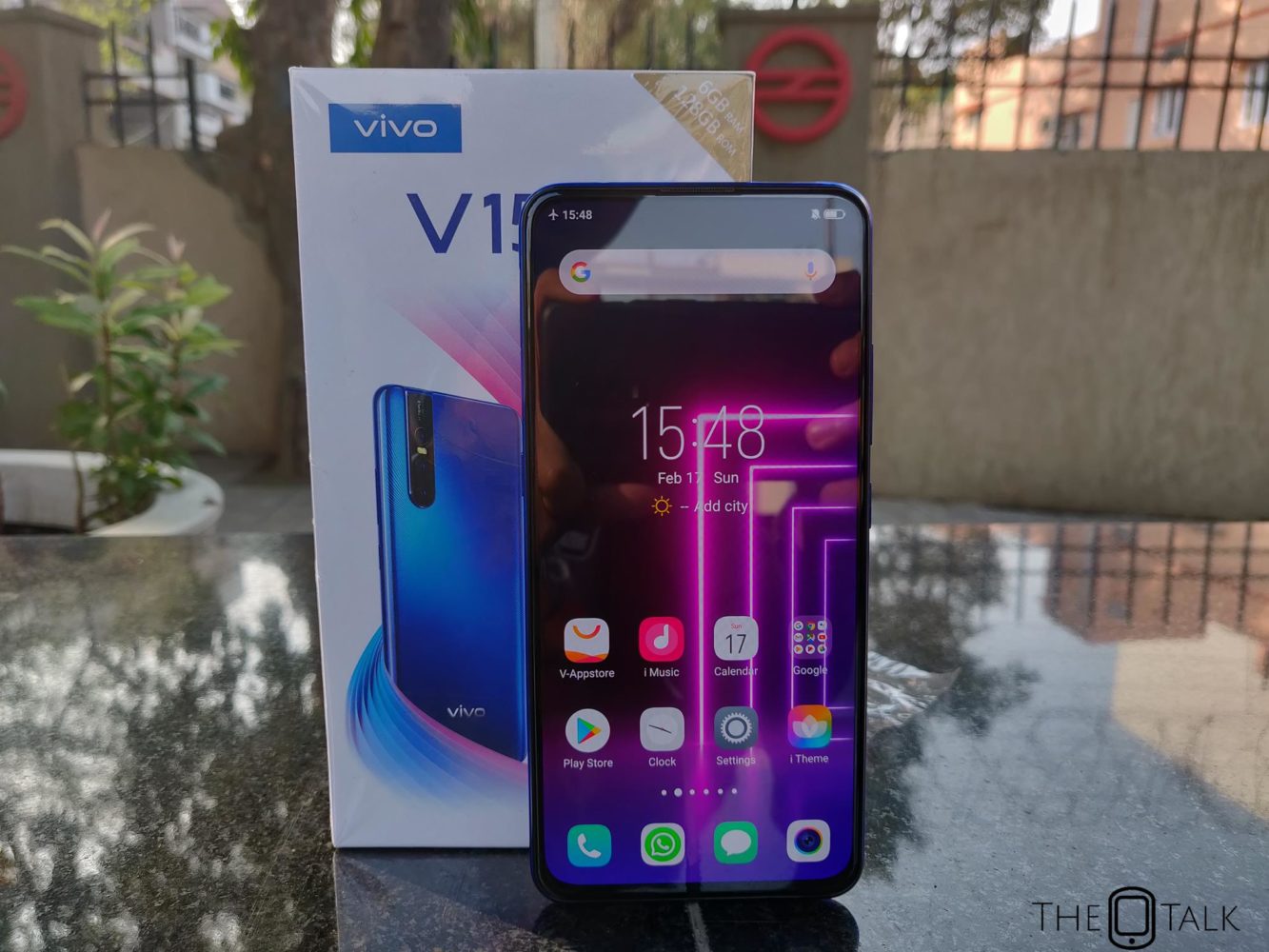 Let’s dive into the details of the latest V15 Pro flagship, and get to know everything in this Vivo V15 Pro review:

Vivo V15 Pro Review – Everything We Need To Know

We know that the raindrop layout is trending right now in smartphones. It allocates some space for the front camera. Though we can’t deny that it’s still a notch but compact one. Vivo this time says, why not eliminate the whole forehead this time to make it a more bezel-less experience. Vivo V15 Pro successfully mimics the bezel-less display with no forehead of the Xiaomi Mi MIX series. 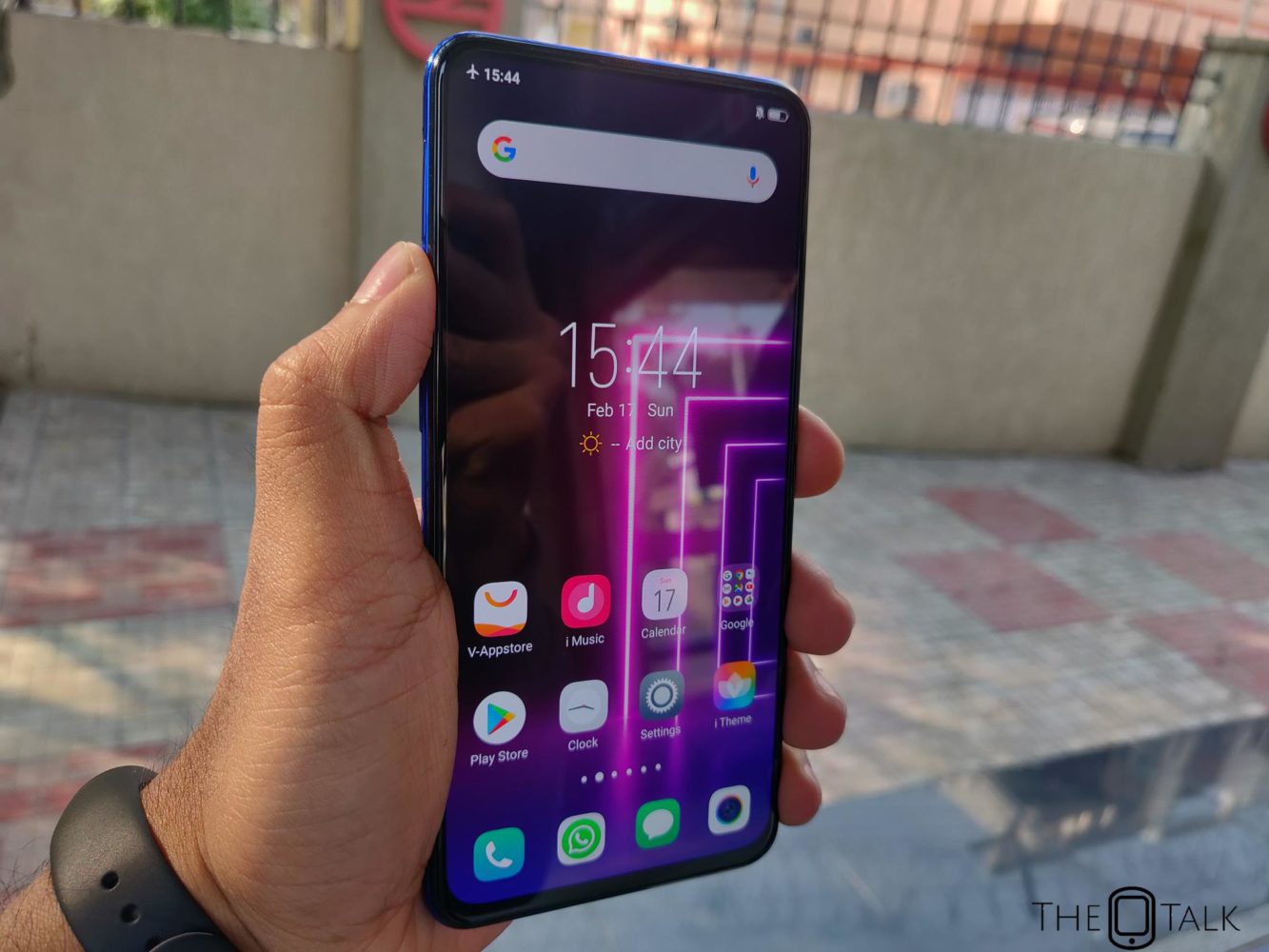 So the question is: where is the camera? Well, despite being a mid-end the front camera is hidden in the chassis and slides out from the top right when needed. Let’s see how long the camera slider will work. However, rather than using the MIX’s hidden earpiece layout (which is somewhat expensive), the earpiece is still intact on the top front border but is sleek which is nice. 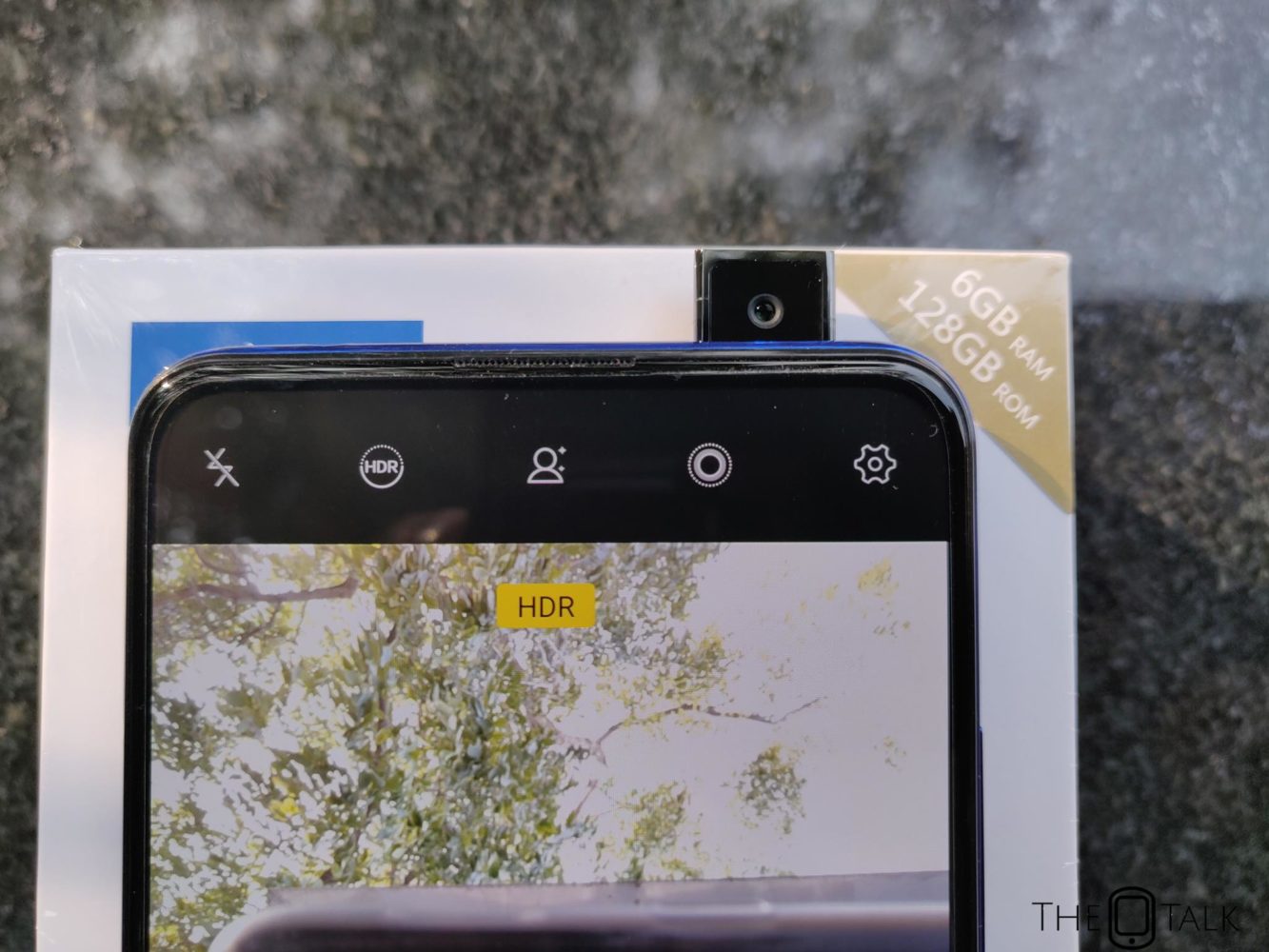 For the first time, we witness a motorized front camera in a mid-end flagship

Considering the physical measurements, Vivo V15 Pro occupies a space of 74.7 mm x 157.3 mm x 8.2 mm and weighs 185 grams. Indeed the phone is heavy despite the premium glass and plastic built. That’s because of its relatively large size since the screen is huge, and from huge I mean 6.39-inches. 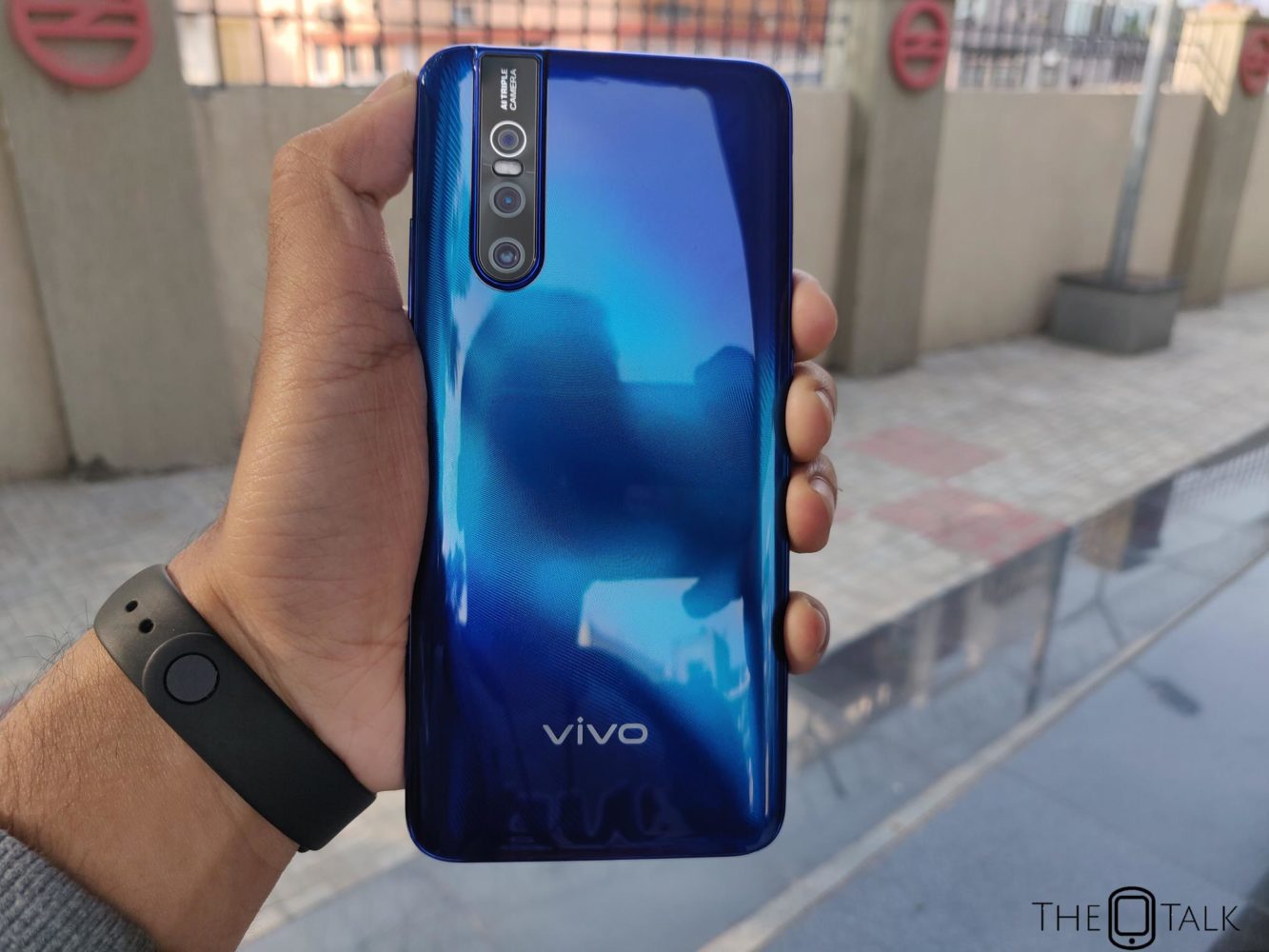 As said above, the phone molds from glass and plastic giving it a smooth touch and reflective surface. Though durability is a factor since the metal phones are much robust, yet the glass built has a much more premium feel to it along with the control temperature of the chassis. 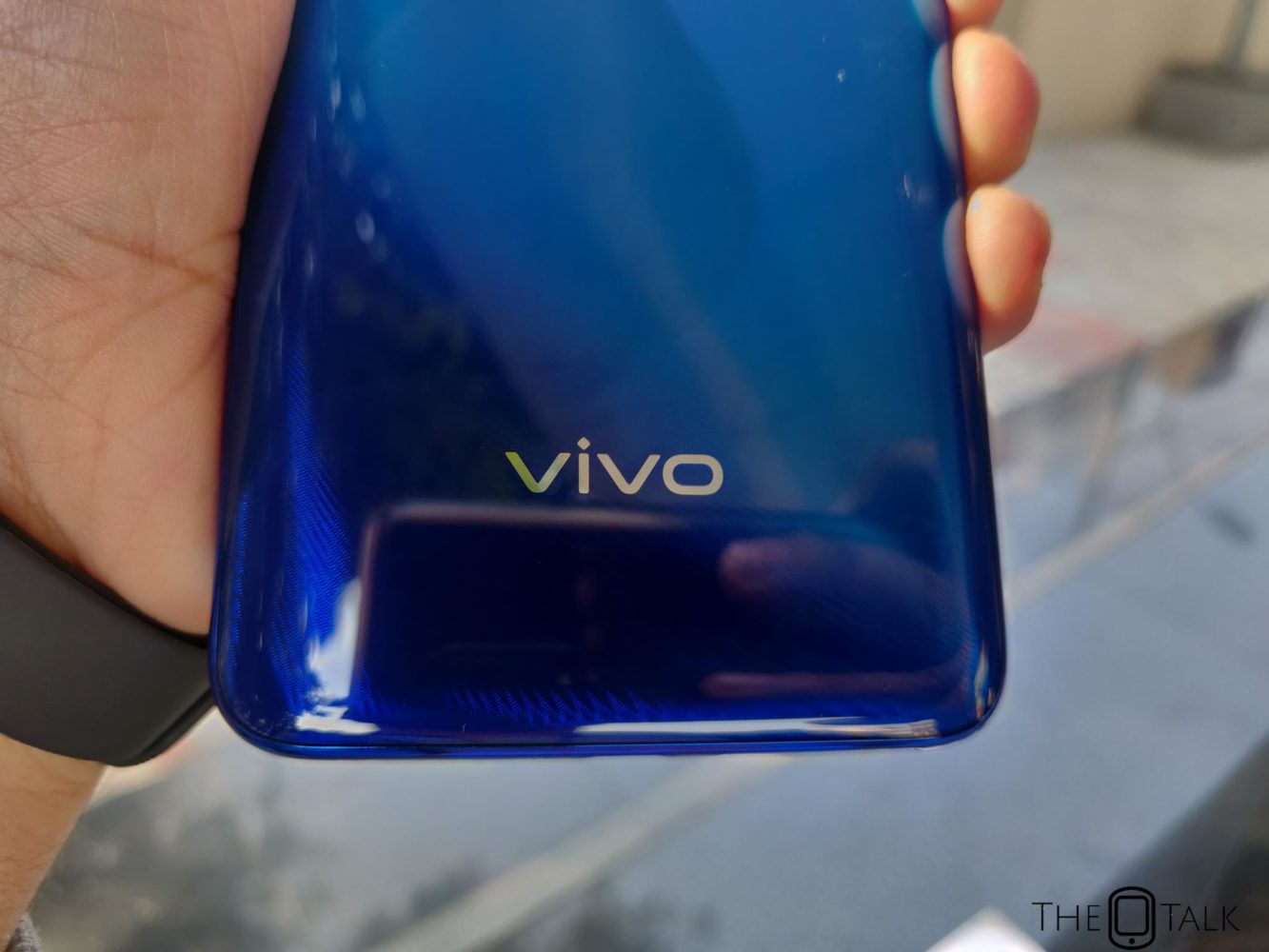 On the rear, we have the vertical arrangement of the triple camera configuration. The primary lens is separated from two secondary ones by the dual-LED flash. The glass-covered camera section starting right from the top left border is something unique which gives it a pleasant look. Another aspect which I liked the most is the variety of gradient colors which comes with the flagship. Only two color options right now which are Ruby Red and Topaz Blue. However, each color option is unique with a different layout at the rear which is one of the best innovations I have seen in 2019. 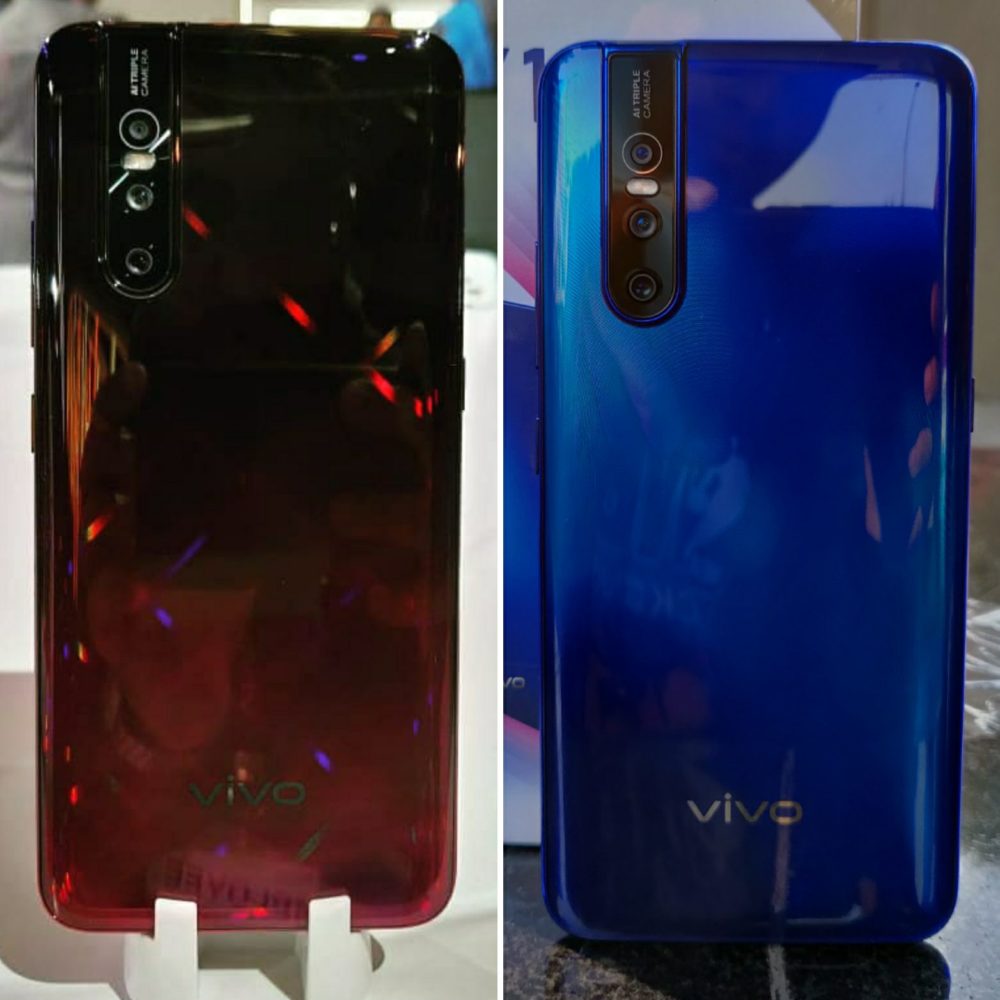 There’s no section of a fingerprint reader on the chassis, which concludes us to the interesting fact that the Vivo V15 Pro has an Under-Glass Fingerprint Reader similar to the Vivo X21 UD. This is too rare to observe in a mid-end flagship but like said we have the $400 price tag there as well. 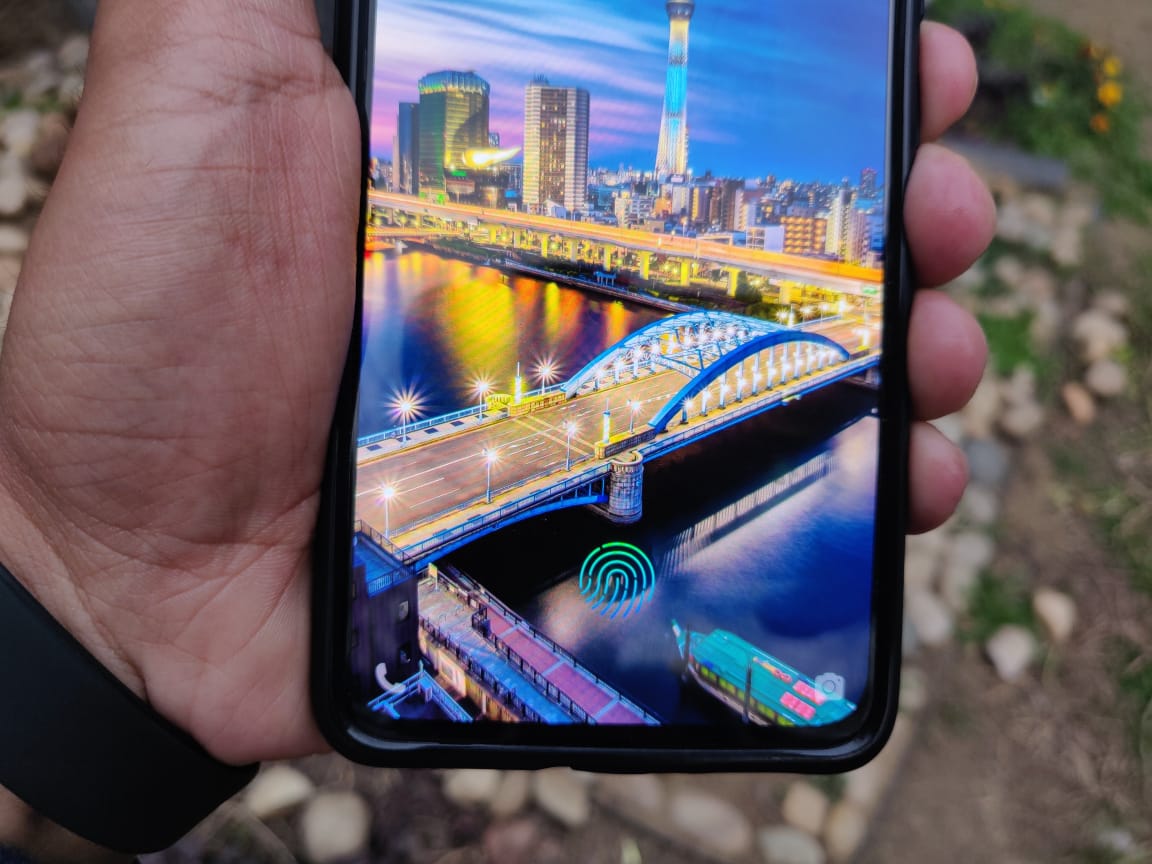 Concerning the port placement, everything is on the bottom of the phone including the SIM slot which is Hybrid (one SIM-one MicroSD card or Dual SIM), Micro-USD Port, and speaker opening. Only the thing which is on the top is the 3.5mm audio jack. It is rather weird to see a Micro-USD port since the use of Type-C ports has become common in 2019. However, it’s perfectly fine since the audio jack is present and we don’t need a Type-C audio thing which isn’t appreciated by most of the techies. The only downside I see is that the speakers aren’t stereo for that much price.

In short, the design and appearance section defines the $400 price tag of this mid-tier flagship. We have the expensive designs such as the no front chin, hidden front camera, glass built, and unique gradient colors. Plus, tradition is kept as well with the Micro-USB port along with 3.5mm audio jack.

Like previously said, Vivo V15 Pro has a huge 6.39-inch Full-HD+ display. This best part is that the display is Super AMOLED offering sharp colors and excellent color gradients with a brightness of 450 cm/m2. For durability, it has a Gorilla Glass Protection 5 coating making it scratch-less. For a much appealing view, the 2.5D glass arc is also added. Here’s a sample of how the display looks: 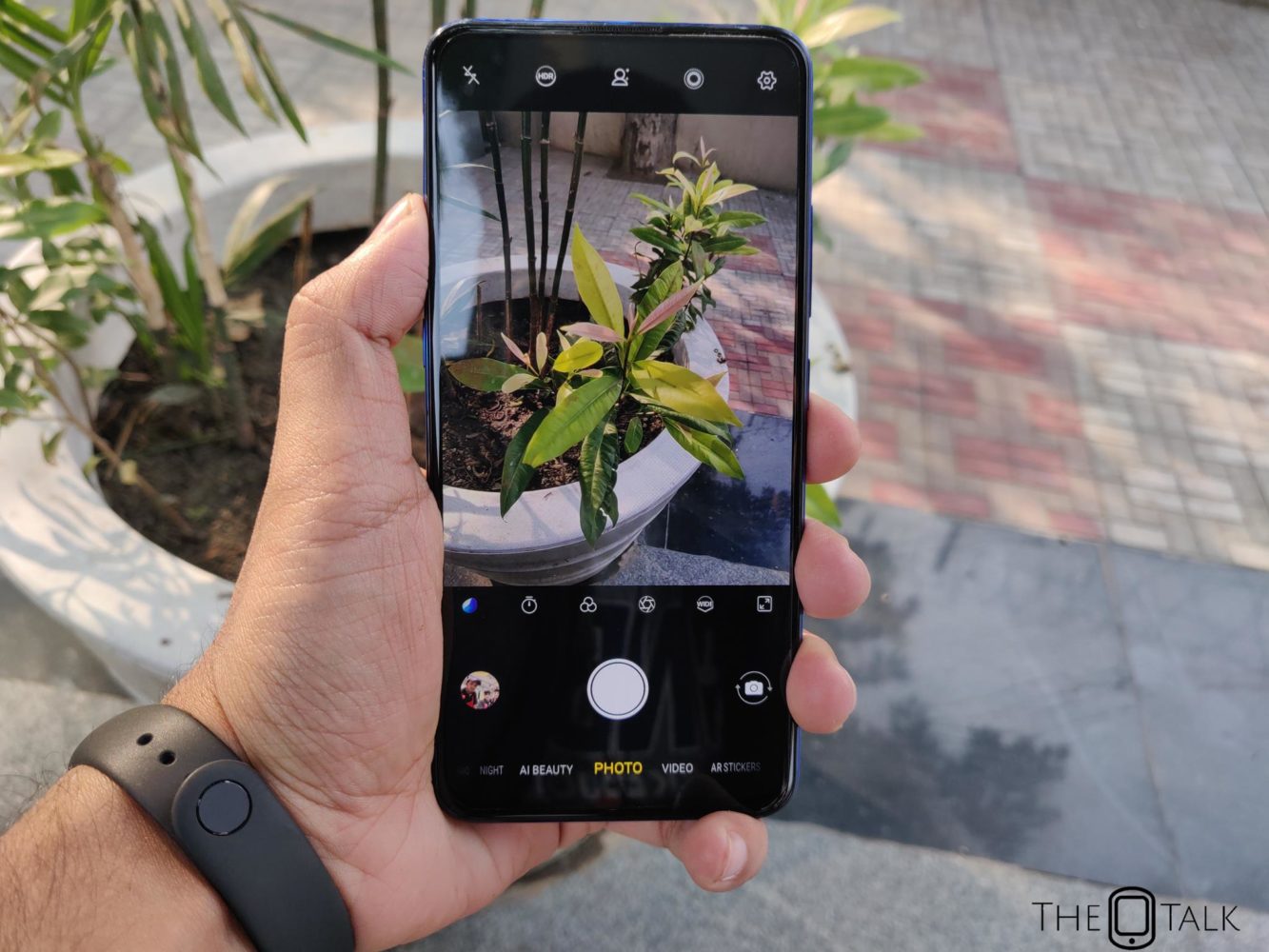 Most of all, the display embeds the fingerprint reader as well. However, you might have to take extra care of the phone, since a broken screen might cost you much more money to repair in comparison to the non-UD fingerprints one. Moreover, the whole thing is literally glass.

Under the bright sun, the text is clearly visible with a slight reflection on the screen as well as the body. In short, it has a perfect grip on big hands and is suitable for one-hand operation.

The heart of the flagship is the latest Qualcomm Snapdragon 675 couple with 6GB RAM and 128GB eMMC 5.1 storage (expandable via SD card). In comparison to the Snapdragon 670, there’s no drastic change. In fact, the process has been decreased from 10nm to 11nm. However, no change has been seen in raw power. Snapdragon 675 has an upper hand on SD 670 because of the application performance increased. Qualcomm advertises SD 675 as experiencing over 90% fewer janks while gaming, 30% improvement in the game launch, 20% in music, 35% in web-browsing, and 15% in social media launch.

We did some benchmarks and the SoC slightly surpassed SD 670 and SD 710 which is appreciable. 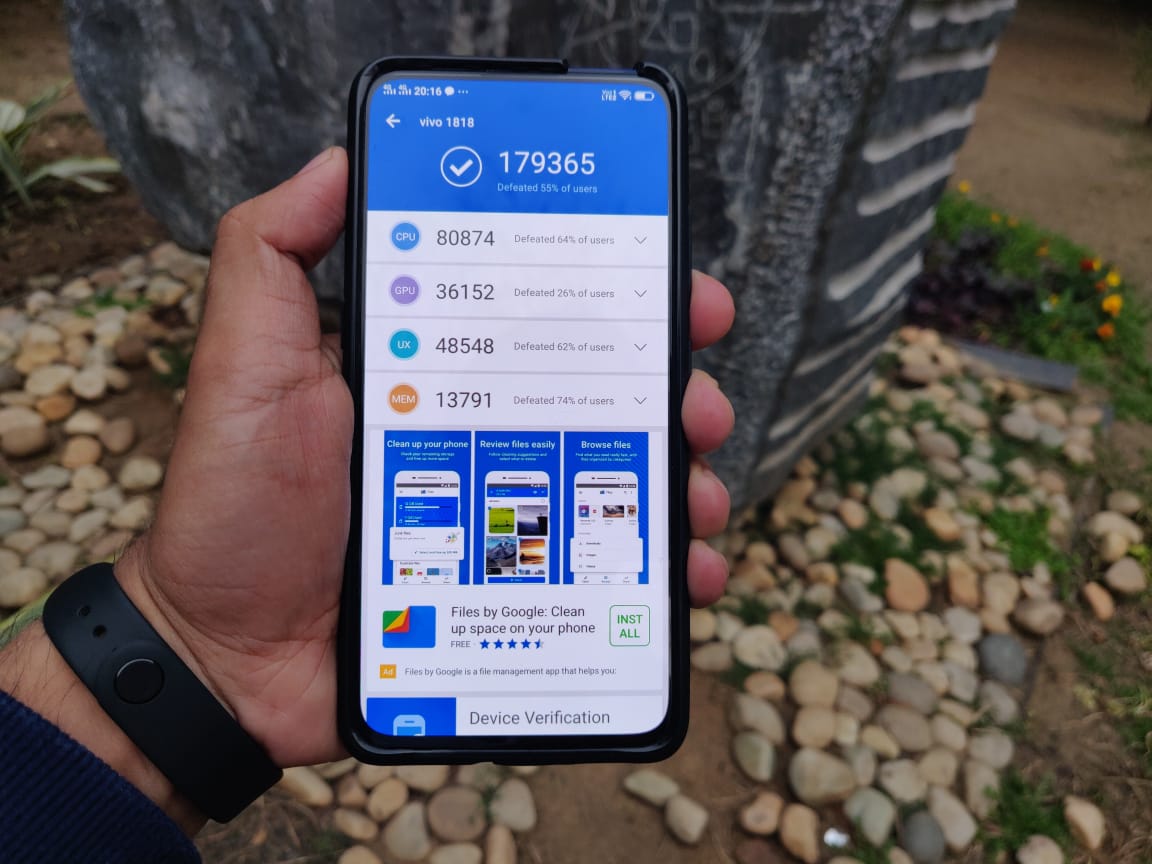 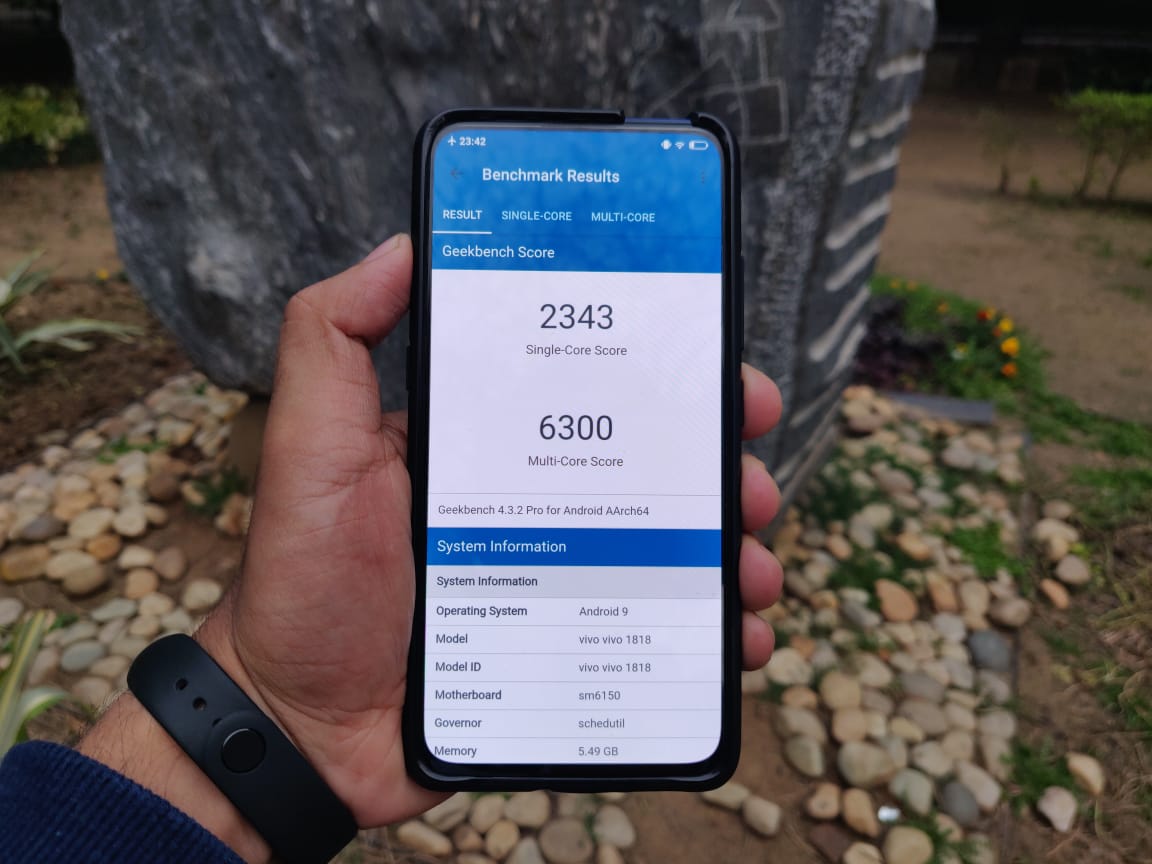 Now the memory and storage combination is definitely high-end and speaks for the high price. The SoC, however, is categorized in the upper-mid end performance. It surely beats Snapdragon 710. But still, I don’t know why not use Snapdragon 670 which has the same raw performance as of SD 675, decrease the price tag to $300 or $350. What’s the point of featuring an upper mid-end SoC in a flagship having a $400+ price tag, when we have flagships incorporating Snapdragon 845 and even the new Snapdragon 855 under the $400 price tag such as Mi 8, OnePlus 6T, and the new Mi 9.

I have seen lately that Vivo provides everything from design to the camera, high-end in a nice $300 to $400 flagship, but when it comes to performance why stick with the Snapdragon 600 and 700 series? Maybe, Vivo spends too much on the design, built, camera, connectivity, and display that there’s nothing left for the SoC section. I’m still waiting for that perfect all-rounder flagship from Vivo like the Mi 9 from Xiaomi. However, every phone has its downside, having a Snapdragon 675 is fine under that price tag as long as Vivo V15 Pro is the first one to feature it along with Super AMOLED, In-Display Fingerprint,  motorized camera, and triple rear camera.

The greatest highlight of the Vivo V15 Pro is it’s front and rear cameras, in this Vivo V15 Pro review. On the front, we have a freaking motorized 32 MP selfie shooter having f/2.2 aperture using face unlock, AI beauty mode, and is really quick. 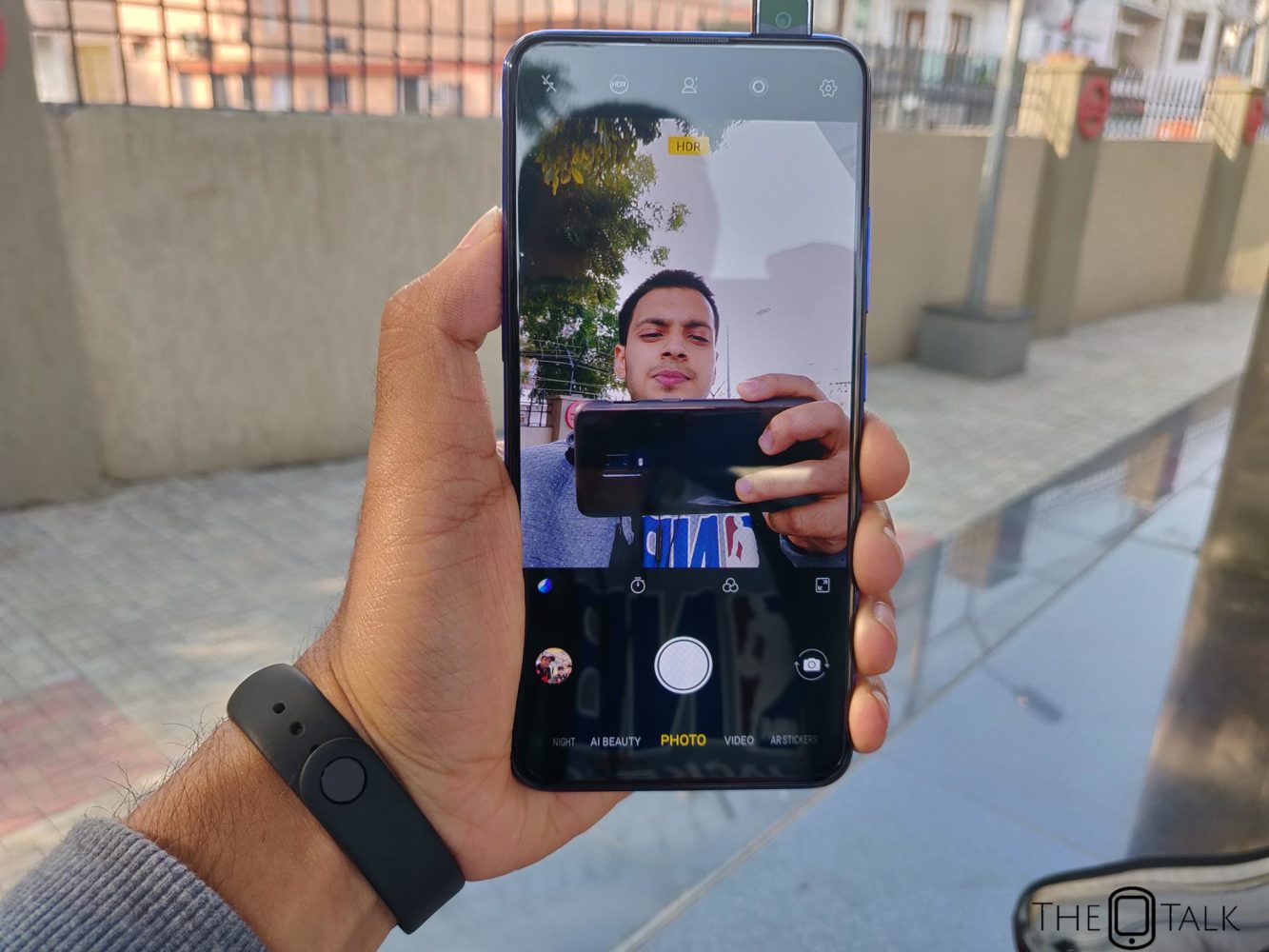 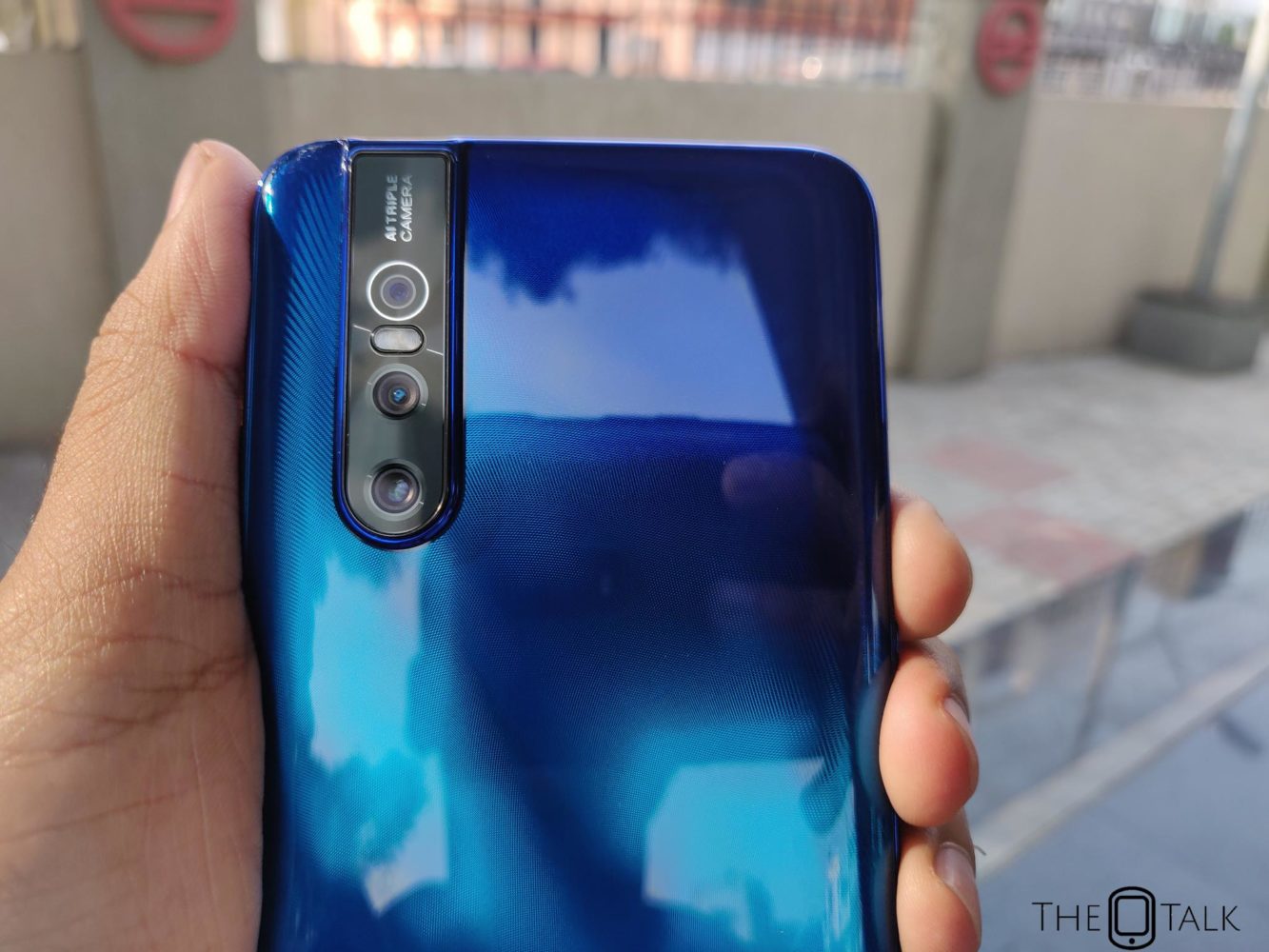 In daylight, the camera performance is at its peak. The pictures are vivid, bright, and highly detailed. The picture has a natural glimpse in it. I must say that this is way better than of Redmi Note 7. Overall, a constant detail is seen in the pictures even around the corners and edges. The light exposure is adequate, not too bright nor too dim, excellent for a balanced environment.

We can see how good the details are on the flowers as well as the overall saturation and brightness.

The actual test of a camera is the low-light environment. Vivo V15 Pro rear camera performance in low-light was surprisingly good, not great as the Huawei P20 Pro, Mate 20/Pro or Mi 9. The details seen in the daylight has been maintained in the low light pictures. There’s relatively less background noise than in Redmi Note 7. However, the only downside is that in dark condition the edges of the objects aren’t clear and has background noise. 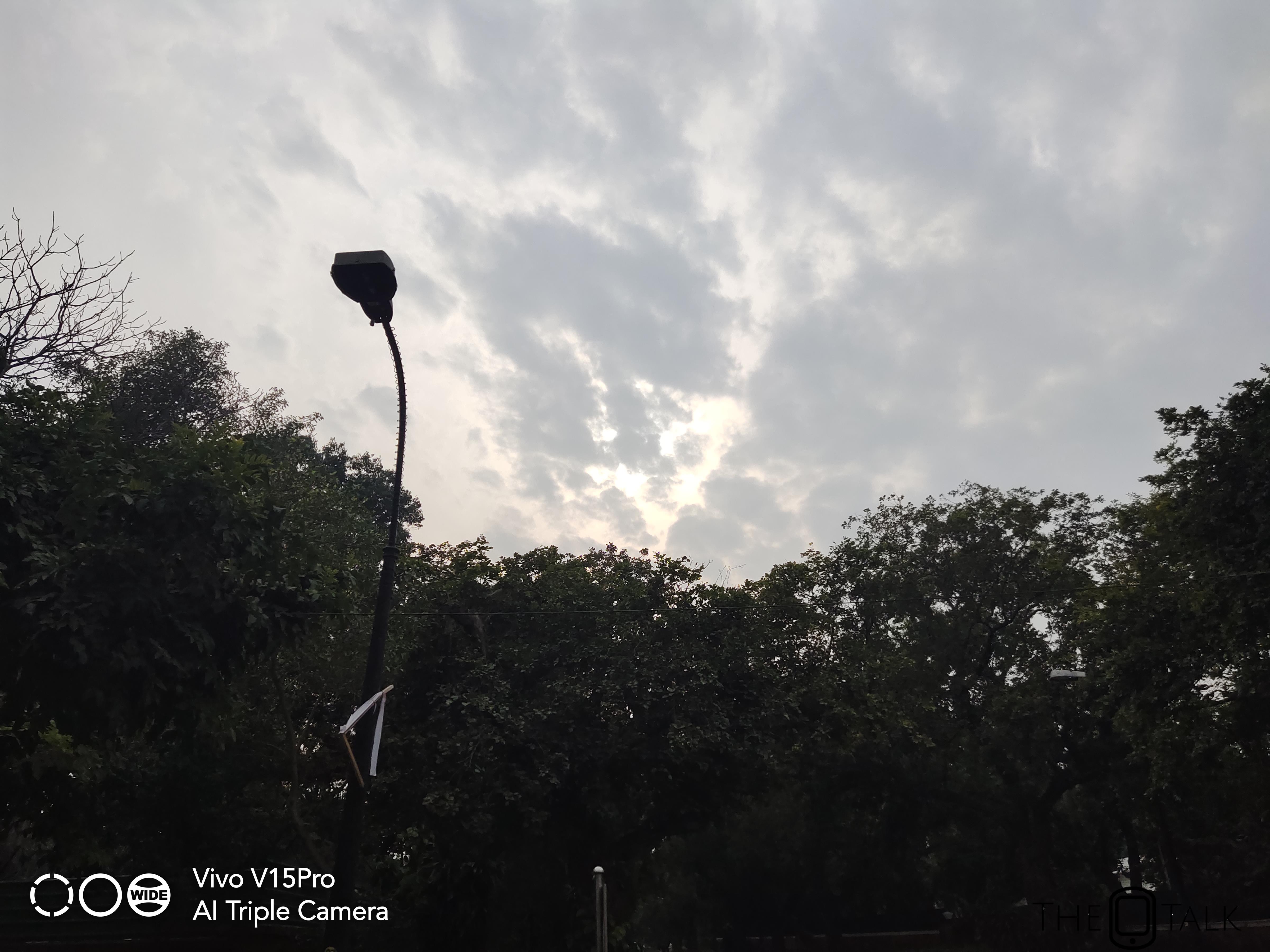 Concerning the video recording, the phone supports 4K resolution filming at 30fps. However, since there’s no OIS in the rear camera, the video appears to be shaky when there’s some movement. However, other factors such as depth, color saturation, and details are good.

In conclusion, in this section of the Vivo V15 Pro review, the camera surprises us with the samples we took. We know that Sony IMX586 should not be underestimated, but despite ranging in the mid-end section, the camera section of the of the phone is definitely high-end, much better than Redmi Note 7 and worth the price tag. Moreover, it’s one of the few phones to feature the IMX586 in triple camera configuration, so it’s a win-win situation.

We have divided the connectivity section into two sub-section in this Vivo V15 Pro review: Wired and Wireless.

In the wired section, like said we have the Hybrid SIM slot, Micro-USB port, 3.5mm audio jack. The OTG is supported. It’s a plus that we have the infrared sensor incorporated in the flagship as well. Other sensors include Accelerometer, Ambient Light Sensor, Proximity Sensor, E-compass, Gyroscope.

Moving to the wireless section, there’s Wi-Fi, Bluetooth (Bluetooth 5.0), GPS, NFC (limited to a few countries), and 4G networking. The reception and signal strength aren’t as good as the metal ones with a unique antenna layout but they are still fine in comparison to the other mid-end glass builts.

The phone is powered by 3700 mAh Li-Polymer, non-removable battery. Since we have SD 675, the battery supports the latest Quick Charge 4+ technology. However, the charger is still a QC 3.0 like the rest of the QC 4+ supported smartphones. On average use, Vivo can easily survive a day and at the end of the day, you are left with 10% of the battery from 100%. The on-screen time is 6 hours.

It’s good to see Vivo moving to Android 9.0. Chinese manufacturers are too slow when it comes to moving to the latest Android. However, that’s not the case with Vivo V15 Pro. The flagship runs on the customized OS of Vivo known as FunTouch OS, based on Android 9.0. Funtouch OS has some AI optimizations and tweaks in it along with custom themes and user interface. 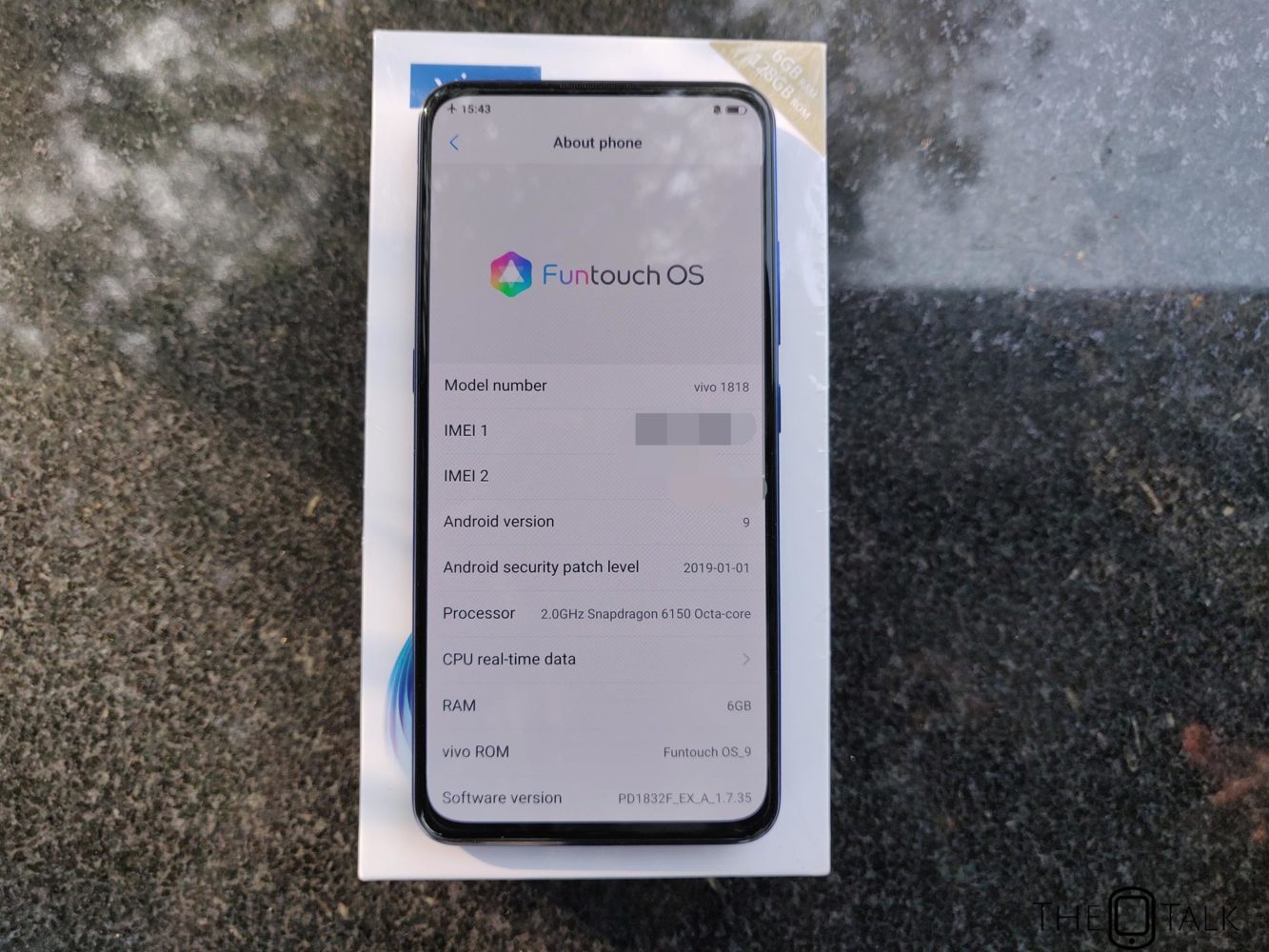 There are no extra apps apart from those of Vivo and Google. Snapdragon 675 apps optimizations ensure a smooth and fast response. In comparison to the MIUI 10 from Xiaomi, EMIUI 9 from Huawei, the user interface isn’t that good but it’s definitely unique. However, the response and opening time are the fastest in the mid-end category.

Looking at the question, does $400 defines this mid-end flagship? Surely it does. Despite having Snapdragon 675 SoC, the price of a high-end device, this phone has all the features which are featured in a high-end premium flagship. These include the motorized front camera, borderless display, triple rear camera’s stunning performance, wide connectivity, glass built with two gradient color options Moreover, it’s the first flagship to feature the latest Snapdragon 675 with some great app optimizations done. All that for a price of 28,990 INR ($408).

Vivo V15 Pro is available to pre-order in India only for a price of ₹28,990 (408 USD). There are two color options: Ruby Red and Topaz Blue. You can pre-order it from Amazon India. When you pre-order Vivo is offering one-time free screen replacement, no EMI up to 12 months, and much more. Here’s the link to the store: