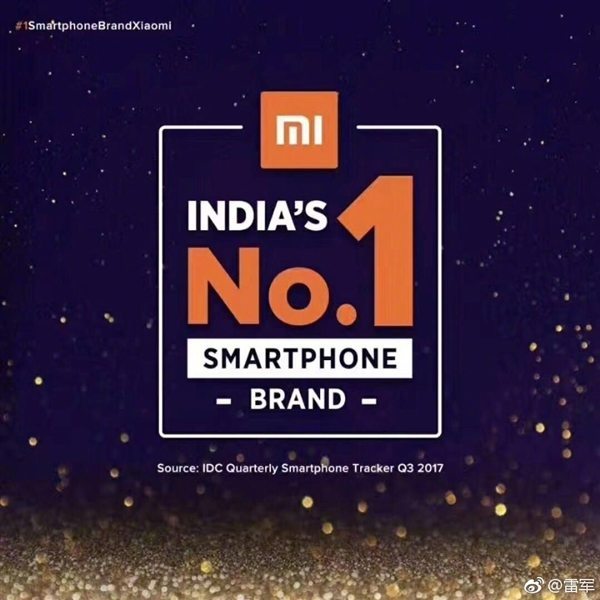 Previously, Xiaomi ranked second in the IDC ranking of Q2 2017. Meanwhile, Samsung took the first place. However, in the latest Q3 2017 standings, a twist occurred, and Xiaomi becomes India’s No.1 Smartphone Brand. Xiaomi in on the lead with a market share of 23.5% and a shipment volume of 9.2 million units.

In comparison with Q3 2016, the growth rate has increased up to 300% in Q3 2017. No doubt, Xiaomi has become the fastest growing smartphone brand in the Indian market.

Specifically concerning about the models, the Redmi Note 4, Redmi 4 and Redmi 4A are three smartphones which are on the list of the top five smartphone sales in India.

"Today the top 3 best-selling smartphones in India are all @XiaomiIndia phones!" – @CounterPointTR

Our motto has always been to deliver high quality innovative products at affordable price! This is something that our #MiFans have always understood.#NoMiWithoutYou (3/3) pic.twitter.com/2LUQd6ffPV

One of the most eye-catching aspects is that Xiaomi Redmi Note 4 released eight months ago but still had 4 million units shipments in Q3 2017, which is legendary.

I’m extremely humbled to announce that @XiaomiIndia has become the No. 1 Smartphone Brand in India, as per @IDC's latest Quarterly Smartphone Tracker (Q3 2017)!! 💪

A journey that started 3 years ago has now turned into an unbelievable legacy! #1SmartphoneBrandXiaomi pic.twitter.com/LNDIC4s7Yp

In response, Manu Jain, President of Mi India, stated that as far as we know, Xiaomi is the first company to take a leading position in many fields under such a short period. He says:

Xiaomi is committed to bringing innovation to every consumer and now our achievement in India is proof of this commitment. This milestone in amazing achievements can not do without the joint efforts of more than 350 of my Indian colleagues, and we are committed to bringing innovations to every aspect of products, business models, infrastructure, marketing strategies, etc.

At the same time, Xiaomi CEO ‘Lei Jun’ congratulated India on this achievement. He said in an email:

This is a very remarkable achievement, it is a new milestone in the history of Xiaomi development!

Here’s a highlight of units shipped from the start of Xiaomi in India till date:

Happy to share that @XiaomiIndia shipped 9.2 Mn smartphones in Q3 2017.

After becoming India’s No.1 Smartphone Brand in Q3 2017, what’s next for Xiaomi? We just have to wait and see.