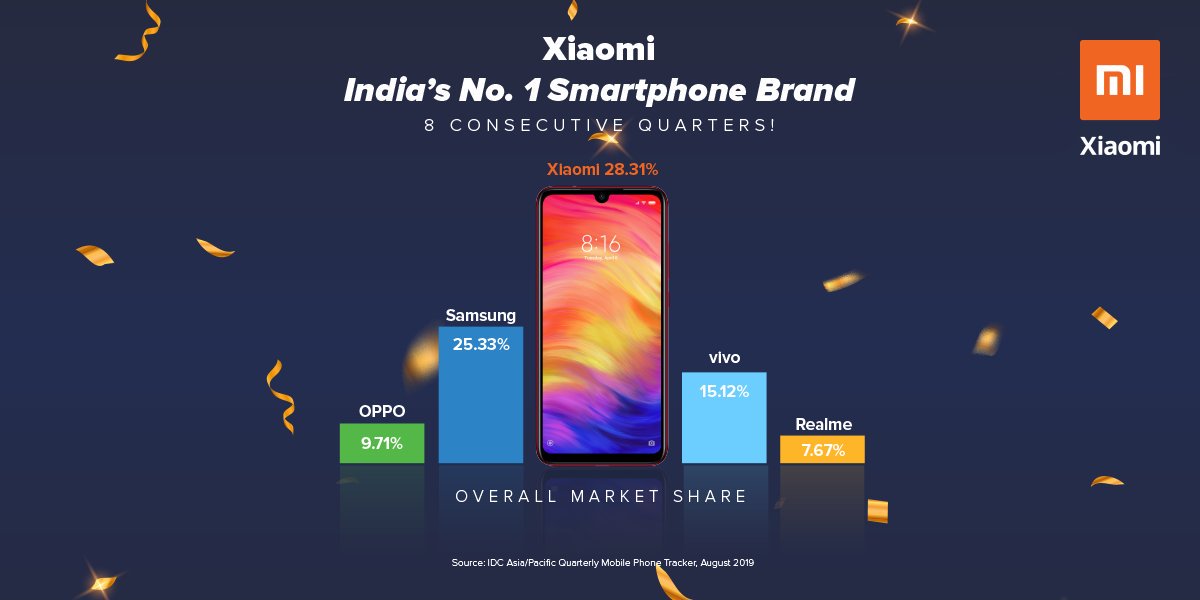 Xiaomi is India No.1 Smartphone Brand For 2 Consecutive Years

Today, Xiaomi India’s Managing Director ‘Manu Jain’ tweeted that Xiaomi has retained the No.1 Smartphone Brand in India for eight consecutive quarters which are two years with a market share of 28.31% in Q3 2019. Samsung was at second followed by Vivo (3rd), OPPO (4th) and Realme (5th).

No. 1 once again! 🥳🥳@XiaomiIndia has once again emerged as the #1SmartphoneBrand – @IDC. 🎉We have now been the #1 brand for 8 consecutive quarters (2 years)! 💪

Thank you all for your love & support. 😍 RT if you have been part of this incredible journey. 🔄#Xiaomi 💖 pic.twitter.com/UV40dClsCr

The credit goes to Xiaomi Redmi 6A which has become India’s best-selling smartphone for three consecutive quarters. The second best-selling model is Redmi Note 7 Pro. Meanwhile, the third best-selling phone is Samsung Galaxy A70.

1⃣ #Redmi6A has been the top-selling phone for 3rd consecutive quarter. 🥇

According to the data, Redmi 6A is the low-end model launched by Redmi in India on September 2018. The standard version which is 2GB+32GB is priced INR 6999.

Redmi Note 7 Pro is a new phone launched in India in the first half of this year. The standard version (4GB + 64GB) launch price is 13999 Indian rupees

Let’s see if we see the same statistics of Xiaomi India this Q4 2019 since the Realme 5 series has released and getting popular in India.