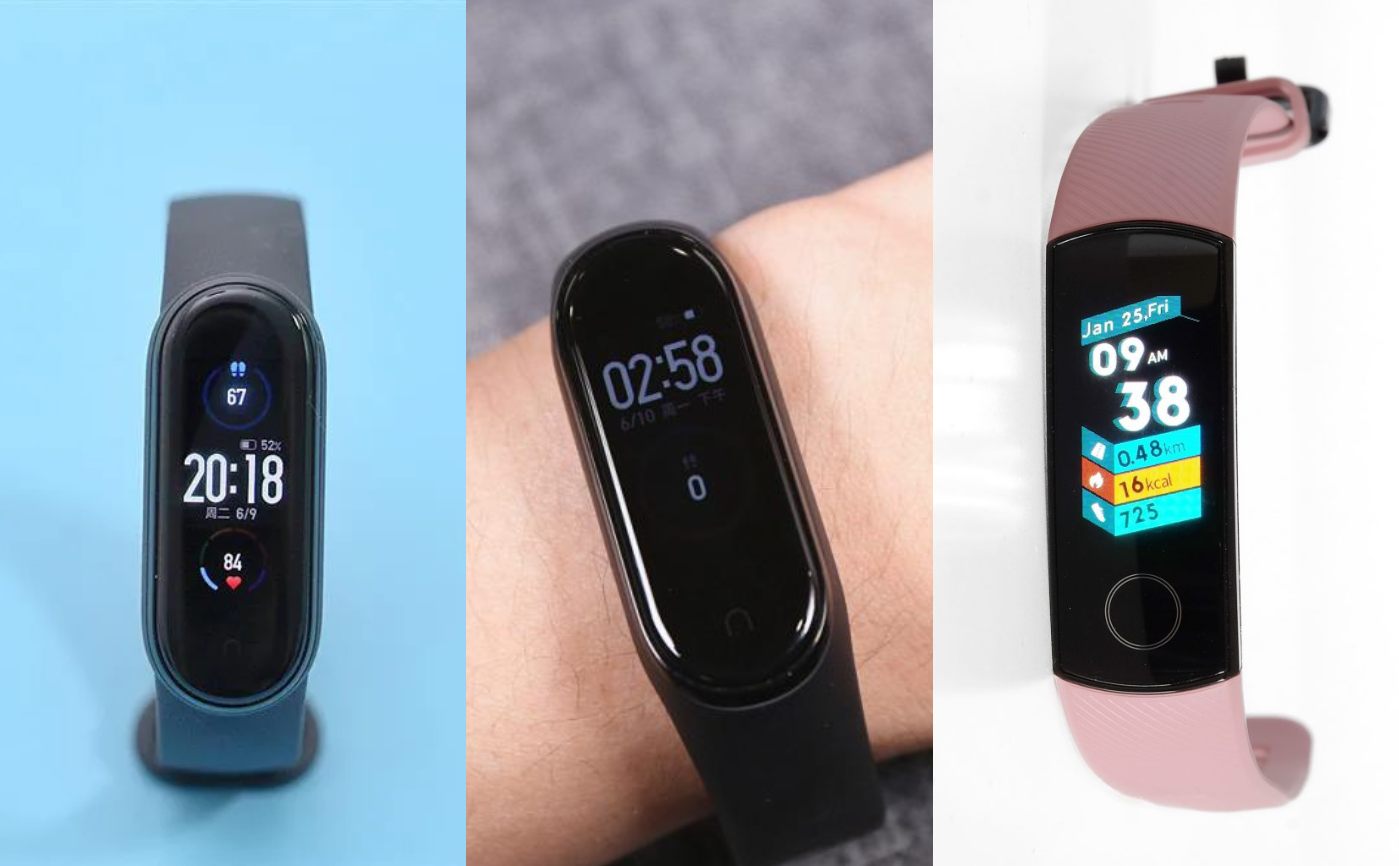 Now considering the price, we have Xiaomi Mi Band 4 as the cheapest one here thanks to the price drop. Yet, Honor Band 5 has the best price-to-performance ratio because of accurate readings than the Mi Band 4. Moreover, it also has all-day sleep monitoring and SPO2 level monitoring feature which is missing in Mi Band 4. As for the Mi Band 5, it does have slightly better readings than the Honor Band 5, and all-day sleep monitoring (including naps) when compared to Mi Band 4, however, the mentioned feature (SPO2) is still missing.

Moving to the design section of the comparison, there’s no major difference in terms of design in the Xiaomi Mi Band 5 and Xiaomi Mi Band 4. It’s still the same iconic elliptical (capsule) shape but slightly bigger in size in the Mi Band 5. Moreover, the circular touch button has been replaced with an arc-style touch button. That’s all!

At the bottom, we have the PPG sensor and the charging terminals. It should be noticed that Xiaomi hasn’t changed the location of the charging terminals for the Mi Band 5, but moved from a dock type charger to a much easy to use the magnetic charger. Now one can charge the band without removing it from the strap and avoid the loosing of the strap over time. Finally, one of the major problems of the Mi Band series resolved.

Meanwhile, Honor Band 5 is similar to its ancestor (Honor Band 4) and the newly released Redmi Band. It’s a classic rectangular design, slightly curved screen to fit well on the wrist. On the front, there’s the large white-colored circular button. It’s almost 2x the size of the circular button on the Mi Band 4, but much prominent. As for the charging, it doesn’t have the magnetic charging but the charger can be attached to the bottom terminals without removing the main chassis.

So, I do prefer the Mi Band series in terms of design. They look much cooler and has a unique and minimalistic approach in terms of design. The large circle on the Honor band is annoying, plus, the design is somewhat common among Chinese smartwatches. However, everyone has a different taste. Moreover, cheers for the magnetic charging in Mi Band 5.

All their devices have food-grade silicon made strap. The Mi Band 4 and 5 have a unique push-button buckle that looks nice and saves some time while wearing. However, this also brings problems like the buckle loosening over time and even coming out.

Moreover, I have replaced my Mi Band 4’s strap two times now in a year, just because of the ring hole of the strap breaking as well as the buckle coming out. The grip hasn’t been like it uses to. The straps are cheap and easily available in different designs. The customization thing is one of the reasons why I love this series and buy it even though I miss some features. I even wrote an article on top 10 Xiaomi Mi Band 4 straps and accessories.

Honor Band 5 buckle design is the traditional tang type but much better when it comes to locking it. It doesn’t come out or loosens over time which adds a plus to the durability.

Winner: Xiaomi Mi Band 4 and 5 (in terms of customization)

All three have tempered glass for scratch protection. However, Xiaomi Mi Band 4 and 5 improve aesthetics by using the 2.5D glass arc which isn’t present in Honor Band 5.

Since Xiaomi Mi Band 5 has a bigger display and 450 nits brightness, it’s the winner of this section.

Xiaomi Mi Band 4 and 5 are equipped with a 6-axis motion sensor: 3-axis accelerometer + 3-axis gyroscope. The 3-axis accelerometer is responsible for sensing front, rear left, and right (three-dimensional space). Meanwhile, the three-axis gyroscope separate dynamic information that senses left and right tilt, front and rear tilt, and left and right swing. As for Honor Band 5, we also have the same 6-axis motion sensor.

All three bands have a PPG sensor for HR detection and support abnormal heart rate alerts. The accuracy with be discussed in the features and function section. Xiaomi mentions that the PPG sensor has been upgraded in Mi Band 5, making it 50% more accurate than the previous generation. This also means that it beats the Honor band 5 since Honor Band 5 and Mi Band 4 HR readings were almost similar.

All three bands have their special NFC version.

Xiaomi Mi Band 5 has the most upgraded hardware

I have made a comparison table of the features to clearly illustrate what’s missing in each wearable.

One thing found in Honor Band 5 is that the user can customize the functions of the band, making it either a health watch only, a smartwatch only, or both. Xiaomi Mi Band series do have this as well but one can turn only specific functions like push notification, sedentary reminder etc.

In terms of accuracy, the pedometer of Honor Band 5 is the most accurate. It’s not perfect, but way better than Mi Band 4 and 5 which show false steps and distance especially while riding a bike.

As for the Heart rate monitoring, Xiaomi Mi Band 5 has the most accurate HR readings thanks to the upgraded PPG sensor. The officials say that the accuracy of irregular heart rate monitoring is increased by up to 50%. Then we have the Honor Band 5 which has better HR accuracy than Mi Band 4.

Xiaomi Mi Band 4 has around 77 dials/clock faces. And the new Mi Band 5 has 100 clock faces by default including the newly added dynamic ones and analog ones as well. The third-party dial apps are enormous in numbers.

In comparison, Honor band 5 doesn’t have that much clock faces and have fewer clock faces third-party apps.

One of the essential features of the wearables is the sports mode. All three have multiple sports modes. Xiaomi Mi Band 5 has the most ones numbering around 11 modes including (yoga, elliptical machine, rowing machine, skipping rope, indoor climb, swimming, freestyle, outdoor running, treadmill, cycling, walking)

We might not have the SPO2 meter in Mi Band 5 with us, but we do have 5 additional features when compared to the Honor Band 5 and 3 more sports modes as well. The HR readings and sleep readers are the most accurate ones among the three with the addition of the REM feature. False-positive may occur as they use to in Mi Band 4 but that’s fine. This is why we have selected the winner of this section to be Xiaomi Mi Band 5.

Xiaomi Mi Band 5 and 4 use the Mi Fit App (4.2 ratings), meanwhile, the Honor Band 5 uses Huawei Health (3.2 ratings). So we have the Mi Fit vs Huawei Health comparison here. Each app is unique in its own way. The UI also resembles each other in most parts. However, I do love the sleep tracker of Huawei Health which has slightly more details to it and the day-time sleeping. The HR tracker on Mi Fit is much detailed than Huawei Health.

Screenshots of the latest version of Mi Fit:

Screenshot of the latest version of Huawei Health: 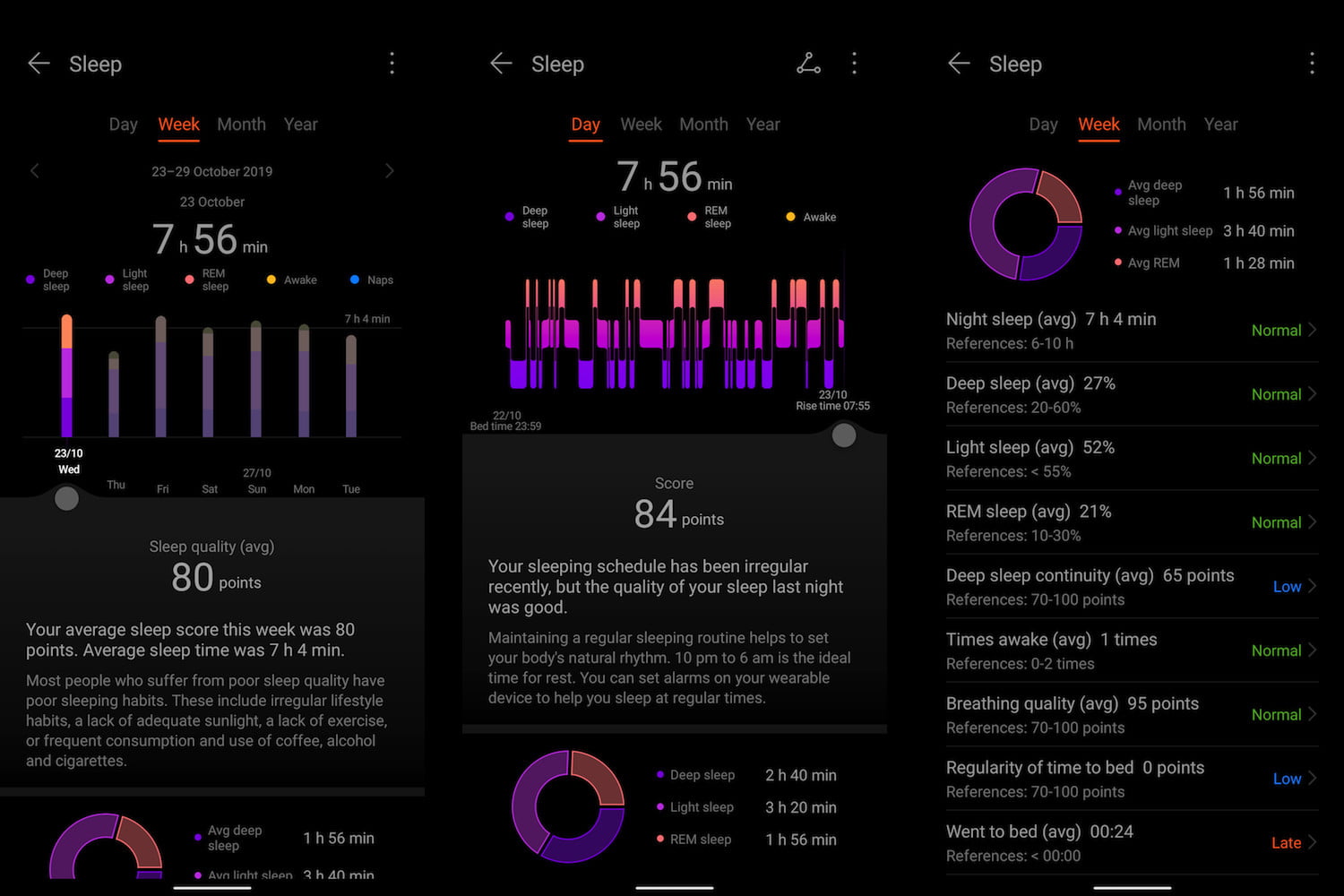 However, Mi Health has way too few bugs and connectivity issues compared to the Huawei Health app. Users have reported how they are not able to connect to their bands in the latest versions, and firmware errors also exist. These are much less for Mi Fit and Mi Band series.

Among the three, Xiaomi Mi Band 5 and Mi Band 4 have the same battery life which is up to 20 days on a single charge. The battery capacity is also the same which is 125mAh. The battery charges in 2 hours from 0% to 100%. The magnetic charging feature added is incredible.

Honor Band 4 has a much lesser battery capacity and the other two, which is 100mAh, however, it also promises battery life up to 14 days. The battery charges in 1 hour from 0% to 100%.

In this section of Xiaomi Mi Band 5 vs Xiaomi Mi Band 4 vs Honor Band 5 comparison, there’s no winner. This is because the battery life of all three bands depends on the frequency of usage, the HR interval set, the brightness setting and other features activated. With almost most of the extra features turned off and the HR interval set at 30 minutes, I was able to get 16 days of battery life on the Mi Band 4.

It’s good to see that the one-year-old Honor Band 5 has managed to compete against the newly released Mi Band 5. Xiaomi Mi Band 5 does have better readings in terms of HR and sleep tracking, more sports modes, 5 new additional features, and magnetic charging that are missing in Honor Band 5 and Mi Band 4. The price difference it’s that much as all three are ranging between $20 to $30 which is ultra-cheap. However, all these features in Mi Band 5 do come at a sacrifice which is no blood oxygen monitoring, and the same false-positive errors in steps and distance.

You can grab the bands from here for the best prices:

You can grab Xiaomi Mi Band 5 for $28.99 on Aliexpress which is the best price yet on the internet. Here’s the link to the store when in the button below:

Buy Mi Band 5 on Aliexpress for $28.99Best Price Via The Phone Talks