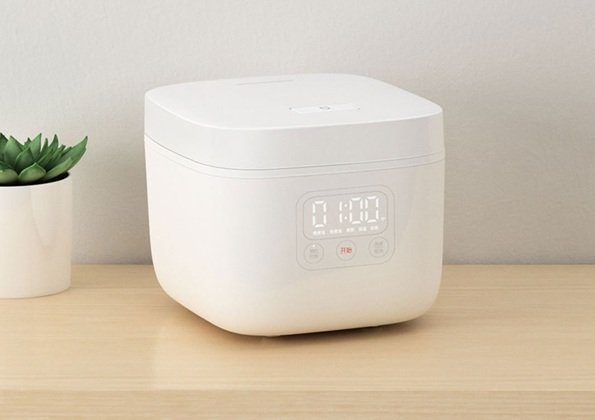 Today, December 12th, a Xiaomi’s product special for kitchen lovers came to the market, or more specifically, to their crowdfunding platform. Manufactured thanks to MiJia subsidiary comes the Xiaomi MiJia Xiaofang Rice Cooker, a tool aimed at rice lovers but who do not want to prepare exorbitant quantities of it. Let’s know a little more about it.

The first thing that will stand out from the pot is its capacity since this is not the first that Xiaomi brings to the market, but the vast majority have somewhat high capacities that may not be very useful when looking for a portable device. That’s why this time they opted for only 1.6L.

Although it looks like a basic implement, the reality is that we have a high-tech device with a Dajin PFA non-stick powder coating, a 400-watt strong cooking system, different dynamic fire-control and short-circuit mechanisms and a unique price in the market. In fact, one of the main qualities is that, as much of Xiaomi’s products, this has emerged from their Crowdfunding platform. Moreover, as an incentive, if it is purchased in its crowdfunding period, the rice cooker will cost only 169 Yuan instead of the 199 established (this financing will last until December 18, and shipments will begin as of January 2).

The Xiaomi MiJia Xiaofang Rice Cooker has all the functions of a standard Xiaomi rice cooker, but with the benefit of only measuring 21.00cm wide and 18.60cm tall, in addition to weighing only 2.12Kg.

The rice cooker also has smart functions and remote control through the Xiaomi APP, where we can choose between different cooking modes, such as fast cooking or slow cooking; and can even be adapted to any of the 3,000 forms of rice preparation.

Finally, at the hardware level, it has a LED display with a type 4 energy efficiency, as well as two temperature probes to be constantly aware of what is happening inside it.

You can grab Xiaomi MiJia Xiaofang Rice Cooker on famous Chinese Global Stores such as Aliexpress, Gearbest, and Geekbuying for the best price of $73 to $85.