Incidents of smartphones exploding around the globe have become too frequent. What started with the infamous Samsung Galaxy Note 7 blasting has reached to other smartphones as well. Most of the phones explode during charging but bursting in someone’s pocket is too rare yet dangerous. Such is the bizarre incident happened with a Xiaomi Redmi Note 4 user on Sunday, in Ravulapalem, East Godavari district, India. 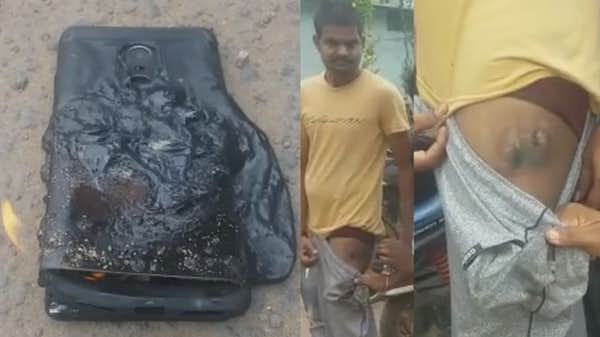 An Indian named ‘Bhavana Suryakiran’ was driving a bike during his return from home to his shop with a Xiaomi Redmi Note 4 in his pocket. Soon doom crossed his path when Xiaomi Redmi Note 4 exploded in his pant’s pocket. Suryakiran sustained a serious 2nd-degree burn on his thigh. As the phone caught fire so it could not be pulled out from the pocket.

The locals came to rescue him and poured water on his pants. They were successful in taking out the phone from the pocket. However, even after throwing away, the phone was still on fire. Suryakiran said that he purchased the phone only 20 days ago from Flipkart. He is looking forward to suing Xiaomi over a defective piece and compensation for his injuries in return.