Xiaomi Sues US Department of Defense Regarding US Ban!

Recently, on January 31st, the tension between Chinese smartphone manufacturer Xiaomi and the US further escalates. Xiaomi has officially issued a statement announcing that  it had sued the US Department of Defense and the US Treasury in the US District Court of the District of Columbia.

U.S. Department of Defense and U.S. Treasury Department’s decision to list Xiaomi Group as a “Chinese military company” by the NDAA contained procedural unfairness and factual identification errors. In order to protect Xiaomi’s global users, the interests of partners, employees and shareholders require the court to declare that the above decision is illegal and revoke the relevant decision. 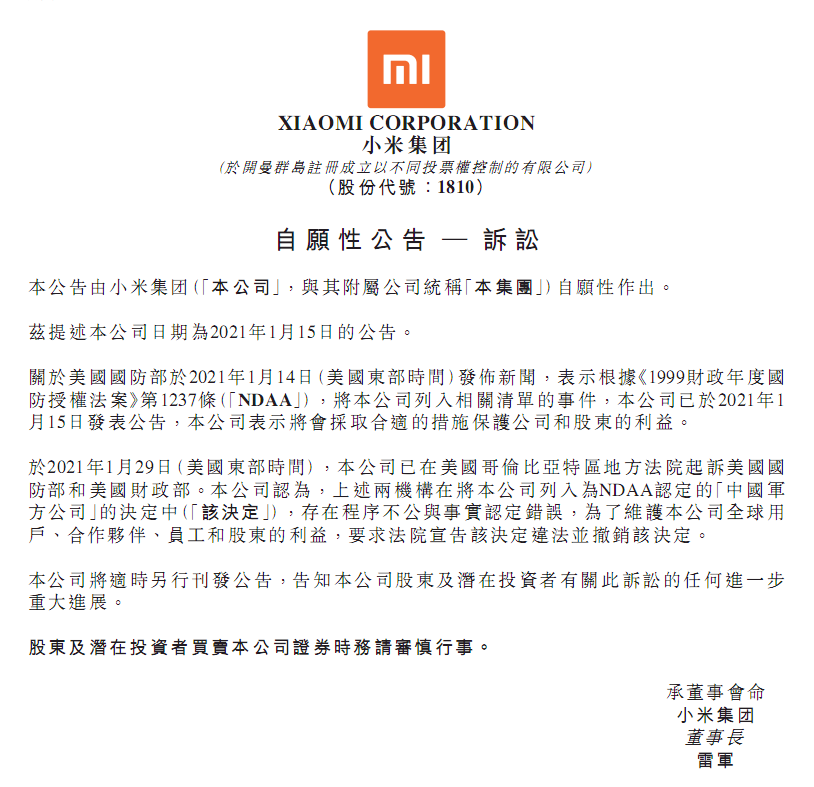 Xiaomi said that it will issue another announcement in due course to disclose further major developments in this lawsuit.

What happened between Xiaomi and the US Government which led to this?

On January 14, US Eastern Time, the US Department of Defense announced that it would include the Xiaomi Group in the relevant list in accordance with Article 1237 of the National Defense Authorization Act (NDAA) of the 1999 Fiscal Year. Many Chinese companies including COMAC, CNOOC, and Beijing Tianjiao are included in this list.

The US Department of Defense added Xiaomi as an ‘Alleged Chinese Military Company’. Thus a ban was made by the US Government related to Xiaomi products.

Xiaomi issued an announcement at that time, stating that it would take appropriate measures to protect the interests of the company and shareholders.

Xiaomi’s suing of the US government is not only beneficial to protect the direct interests of investors, consumers, partners, and employees but also to protect the normal operation of the global industrial chain and the driving force for technological innovation.