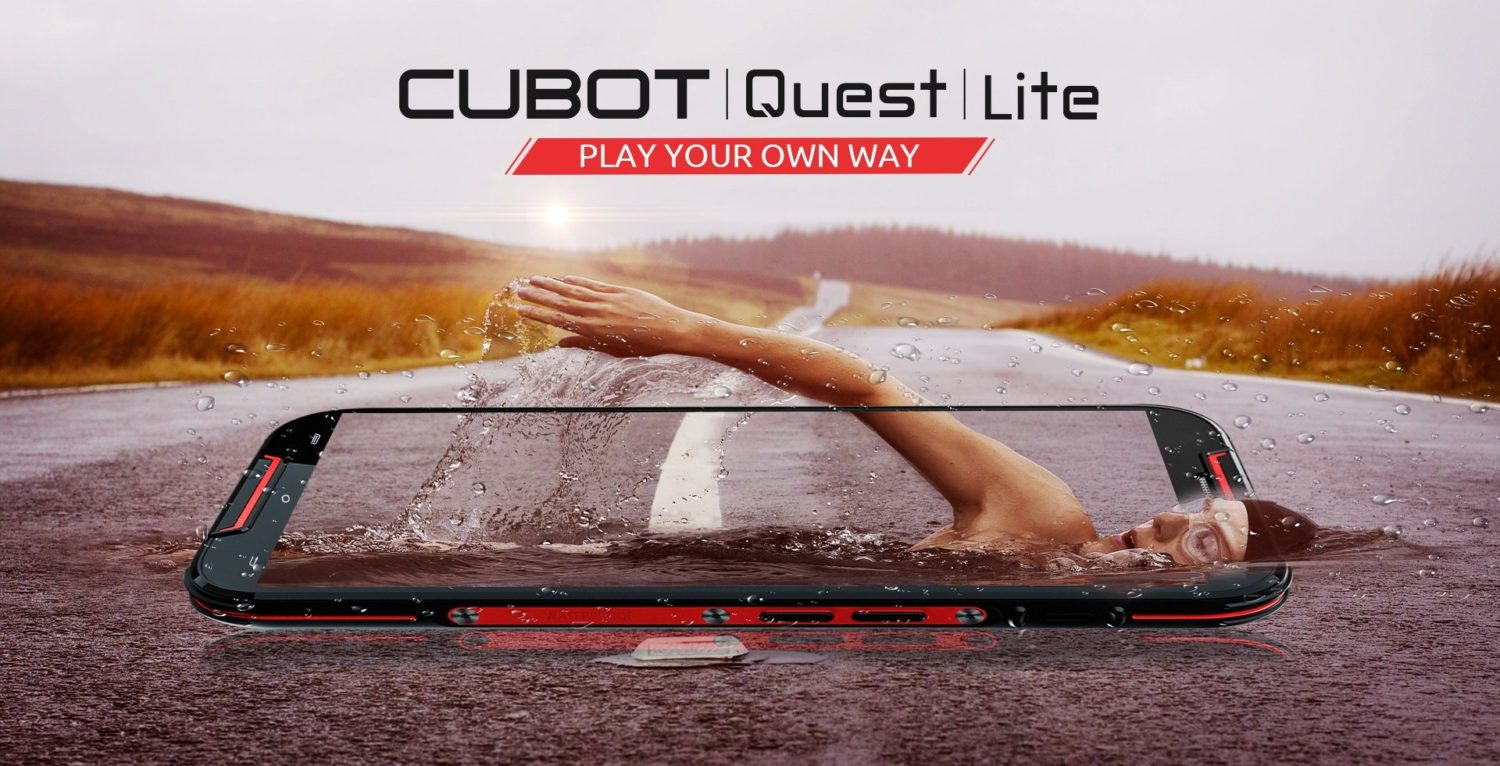 If we need a smartphone for sports activities, we generally think of robust terminals that enjoy great resistance. However, the negative is that most of them leave aside the trends and attractive aesthetics. Today we present an exception, the recent Cubot Quest Lite combines design, performance, and endurance. It is a mid-range smartphone that stands out because despite being a rugged mobile it has a modern appearance. Today, it is in promotion for a few days at only $119.99. 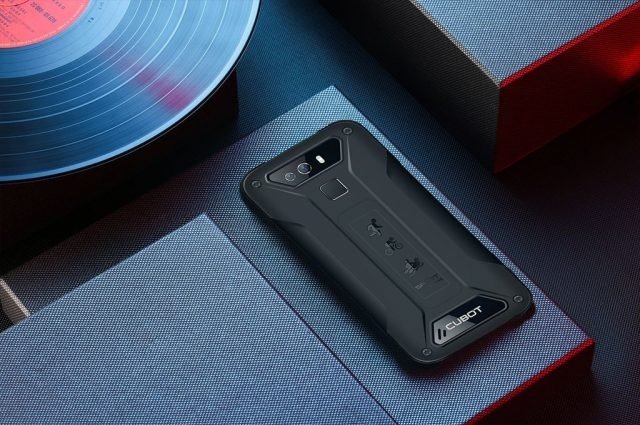 Designed primarily for a young audience, designers have been inspired by the racing tracks when manufacturing this terminal that looks great. Users have the possibility to choose between two alternatives, one completely black and one with details in red in their frames, top, and bottom bevels.

A smartphone has been created that complies with the latest resistance standards while reducing its thickness to only 8.8mm. It also has rounded edges more comfortable for those who have small hands. The other dimensions are 15.20cm tall x 7.40cm wide, in addition to 183g. 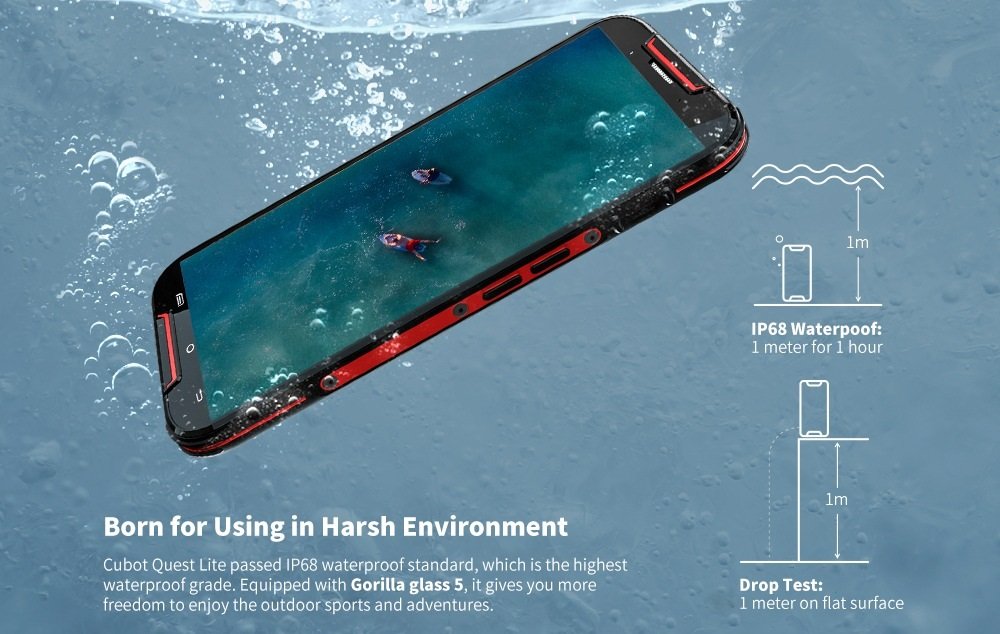 The rear panel of the Cubot Quest Lite shows a particularity with a series of icons of sports activities as well as lines throughout the structure. For greater strength, we have the IP68 certification that makes it resistant to contact with water. 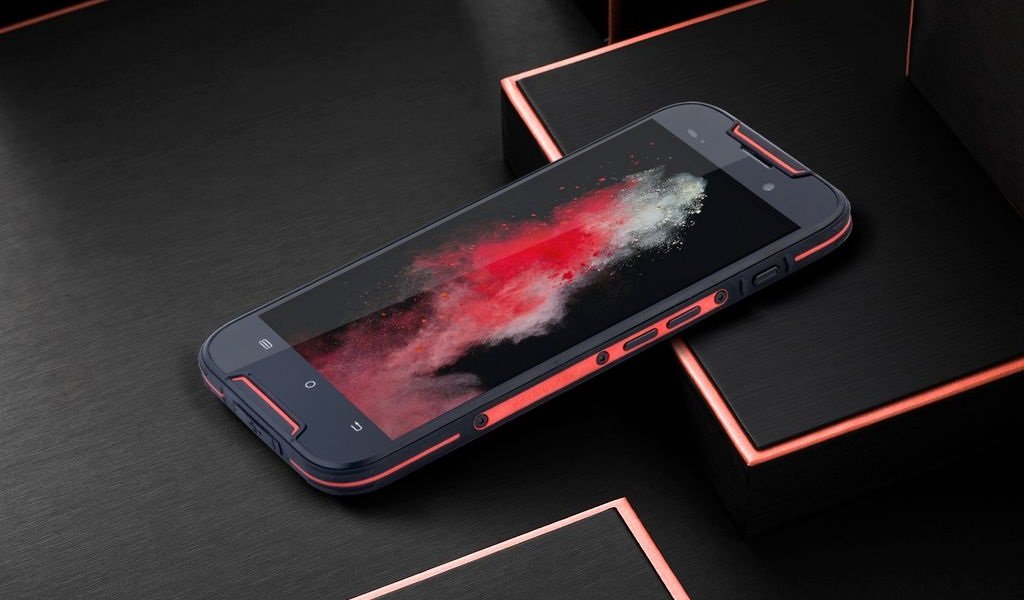 The screen has a size of 5 inches and an HD resolution of 1280 x 720 pixels. It promises very good brightness level with 450 cd / m2 and 1300: 1 high contrast ratio. Plus, its resistance is guaranteed through Corning Gorilla Glass 5 that prevents damage from falls and scratches. 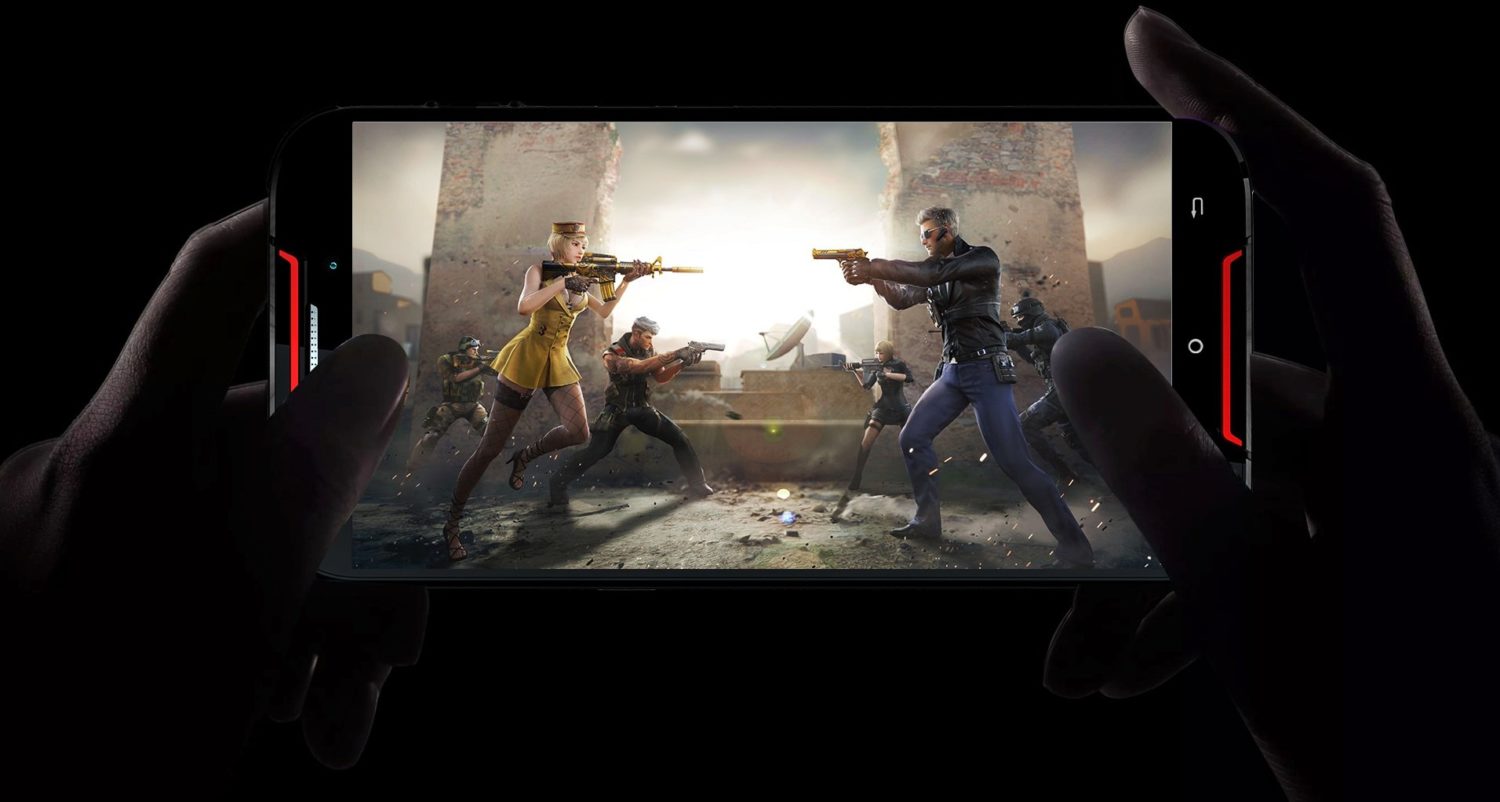 Inside, the processor corresponds to a MediaTek MT6761 quad-core at a speed of 2.0 GHz and is accompanied by the PowerVR GE8300 GPU. In terms of memory, we have 3GB of RAM and 32GB of internal storage, which can be extended through a microSD card of up to 128GB. 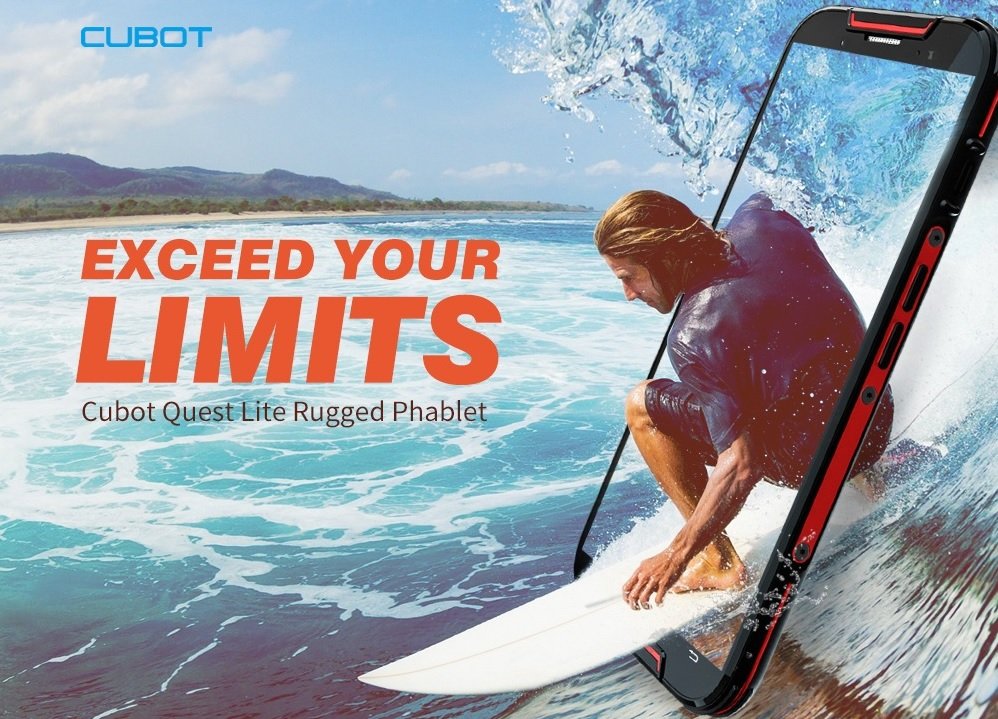 The camera configuration of Cubot Quest Lite complies expectations. It has been equipped with a Sony rear double sensor, the main 13.0MP with 5P lenses and an aperture f/2.2, while the secondary is 2.0MP. The sensor of the selfie camera is 8.0MP, with a special beauty face algorithm that works on the natural lighting of the scene and the color of the user’s skin. 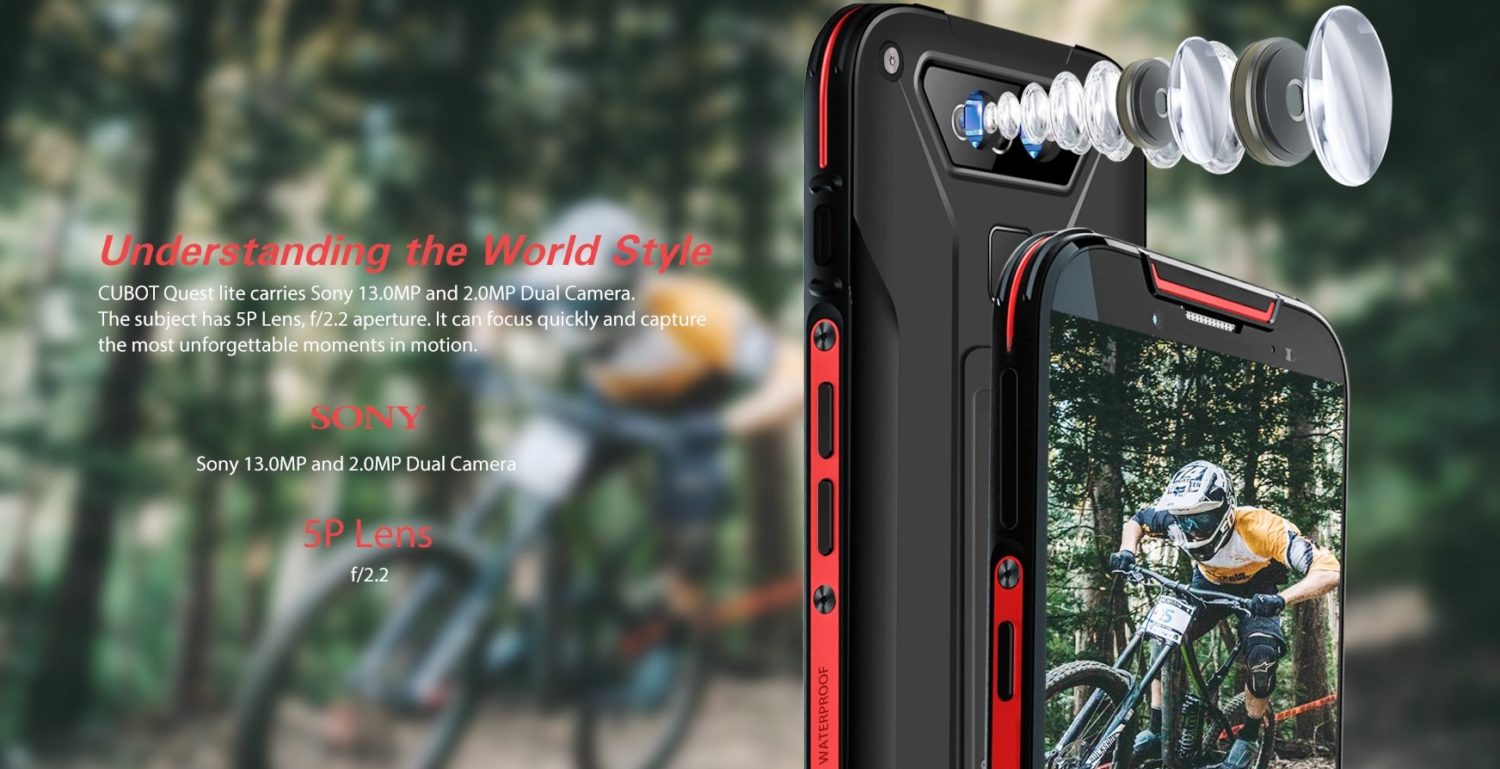 It comes with the usual connections such as Wi-Fi 2.4G, 802.1.1 a/b/g/n, Bluetooth 4.2 and GPS. There is a dual SIM card slot that includes support for 4G LTE mobile networks. Among the sensors we have: lighting, proximity, accelerometer, and gyroscope. On the back panel, you can find the fingerprint sensor for quick access. The factory operating system is Android 9.0 Pie without any extra customization layer that ruins the native Google experience.

A system for recognizing facial parameters has been added to unlock the mobile in a safe way. Finally, a special detail is found in the left frame of the Cubot Quest Lite. A physical button has been added with customizable actions, each user can configure it to perform their most common tasks.

Its battery has a capacity of 3000 mAh and can be recharged quickly with values of 2A/5V thanks to the presence of a reversible USB-C port.