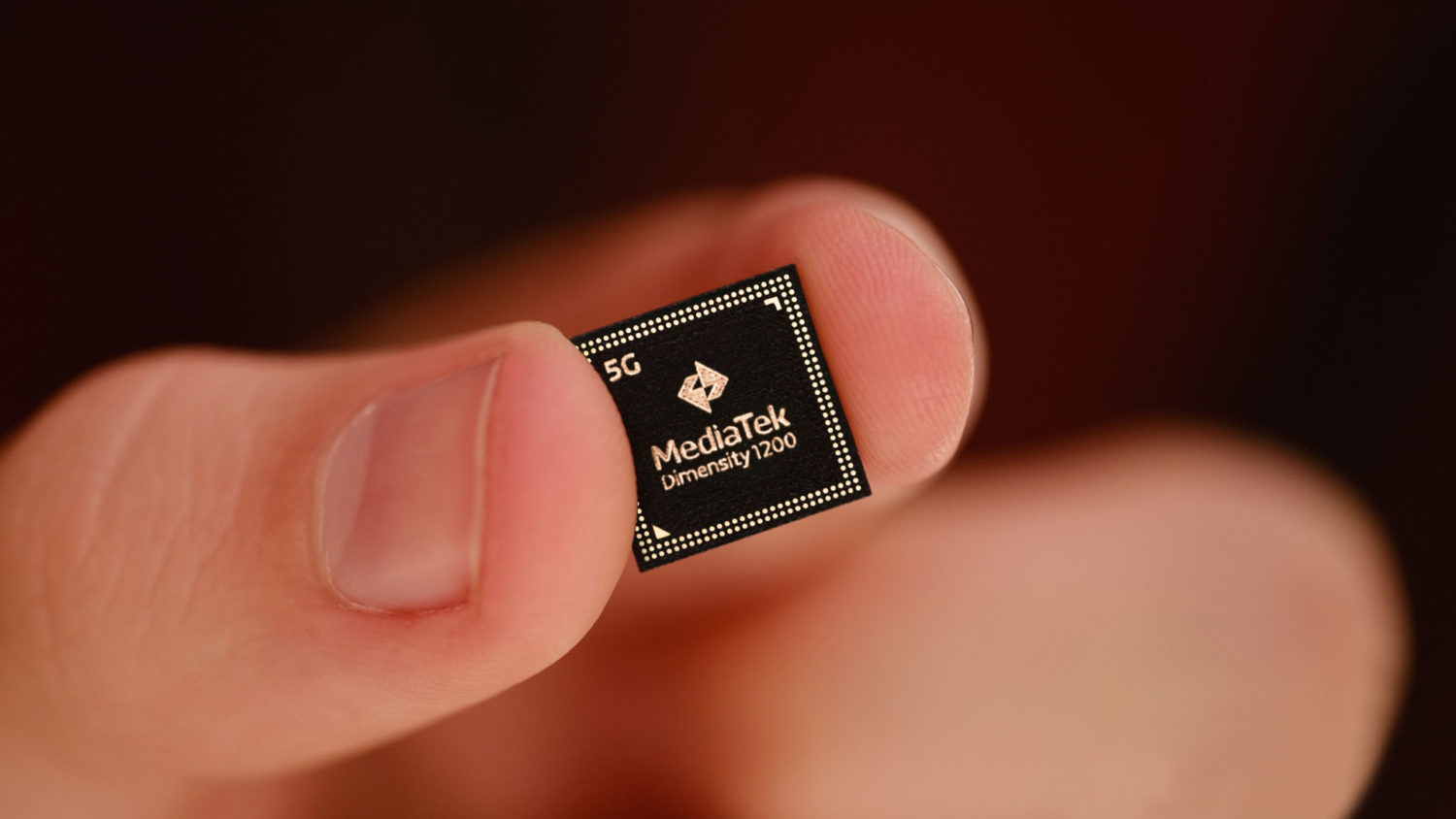 Just two months after launching its latest processor, the Dimensity 700, one of the best-known technology companies in the world, MediaTek, decided to surprise its users with the launch of a new processor, and it is the Dimensity 1200. Today we are going to talk about this new SoC, including Dimensity 1200 specs, phones, features, and AnTuTu score. 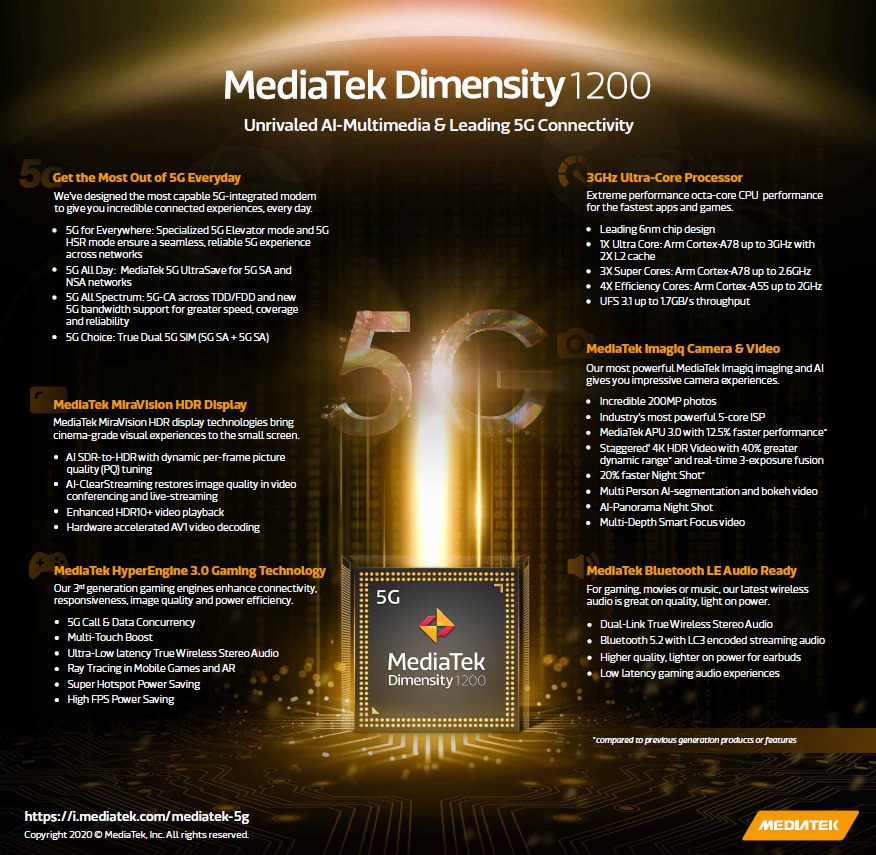 Without a doubt, the process is one of the most important characteristics not only for a processor but for any smart device that has it. On the market, you can find many processors with different process numbers, and it is assumed that the lower the number, the better their general performance will be. The lower process numbers are saved for SoCs used in high-end phones, and it is no secret to anyone that Samsung is an expert in them, so the new Dimensity 1200 has a powerful 6nm TSMC process.

When talking about the CPU with which this new SoC works, the Dimensity 1200 has a CPU based on six cores. The CPU used in this new processor revolves around a main Cortex-A78 core that has an operating frequency of up to 3GHz. As if that were not enough, this great core is accompanied by other three Cortex-A78 cores with a frequency of 2.6GHz, and finally, four Cortex-A55 cores with a frequency of 2.0GHz specially made for all those tasks that require less power.

Although none of the cores mentioned above are the most powerful on the market, the frequency with which the main core works is, in short, one of the highest to date seen in any processor, which gives it an extra point.

In relation to the GPU of this processor, MediaTek decided to place the nine-core Mali-G77 inside it, which is accompanied by the new version of its AI processor, the hexa-core MediaTek APU 3.0 about which we will talk a little. later, which together promise a 12.5% improvement in reducing latency and efficiency.

Already talking about the score that this processor in the different benchmark sites, in AnTuTu, the Dimensity 1200 appeared along with a total score of 622,409 points. 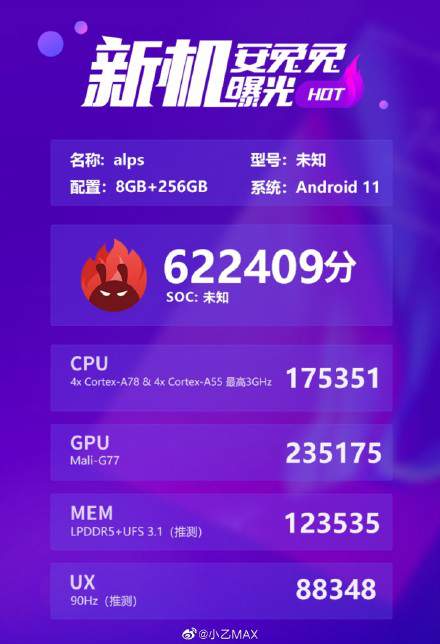 One of the most prominent features of the Dimensity 1200 is the compatibility with displays. It can handle Full HD+ resolution up to a 168Hz refresh rate, the fastest of any processor ad to date (Qualcomm’s SD888 supports 144Hz). That’s high praise for next-gen gaming devices, in case phone makers jump on board. It also supports HDR10+, the high dynamic range dynamic format, so bright displays and the right content providers will be able to deliver a first-rate viewing experience.

About the cameras, this new MediaTek processor is capable of supporting image captures up to 200MP, with a five-core HDR-ISP for processing. The chipset also supports dual 32MP and 16MP configurations and features 4K HDR video capture. The company also admitted that this new SoC includes different functions such as ‘AI-panorama Night Shot’, ‘Multiperson Bokeh’ and noise reduction. With that being said, video decoding supports the AV1 codec, which supports 10-bit content with up to 4K resolution, but so far no support for 8K video recording is offered.

Although there is still no knowledge about which phones will have this processor, among the brands that will bet on this new SoC we have the world famous Realme and Redmi, who have already announced that they will be two of the first companies to launch a Smartphone with the new MediaTek Dimensity 1200.

As it is not yet confirmed which device will have this processor, there is no price range for it. Having said that, there are very strong rumors that Realme’s next phone, the Realme X9 Pro, is preparing to hit the market with this SoC inside it, and if that were true, this new processor would be priced at approximately 345 USD.

In short, MediaTek wanted to start this new year 2021 with great force. Adding to the trend of 5G processors, the new Dimensity 1200 not only brings with it a very high level of connectivity but all the other features that it has will make any device you find work in the best way, in addition, that it has one of the biggest advantages in the entire market: a low price. We are waiting to see how this great processor works, but so far, it looks great!