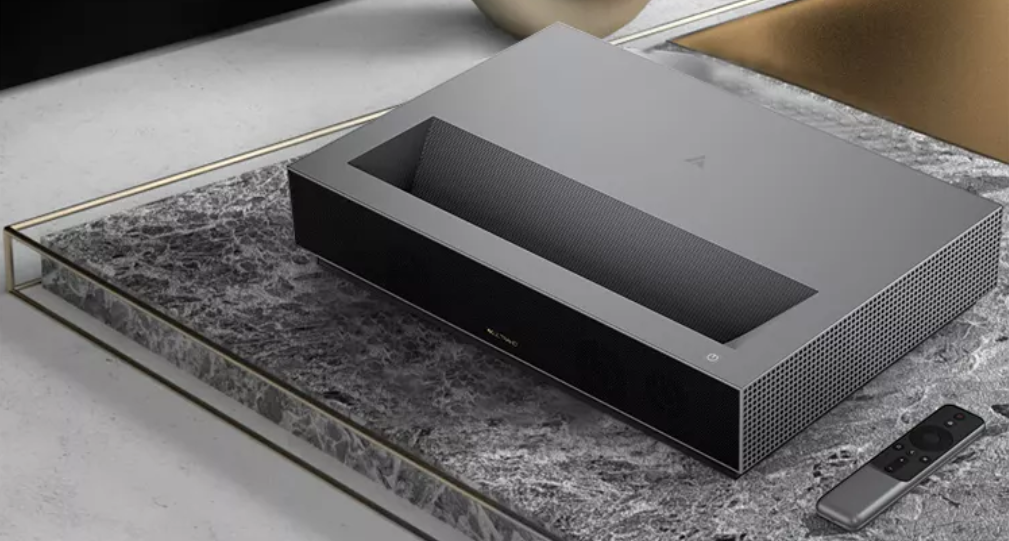 ADLP laser projectors are trending these days because they can provide a 150″ large screen on a 30 – 60 cm projection distance. Thus, they are an excellent choice for those who have a small space to set a projector. In the range of ADLP laser projectors, we have the Chinese ones offering the best price. Now the problem is whether to buy a 4K projector or a Full-HD one? Considering the price difference with the new Wemax ONE PRO and Mi laser projectors which are Full-HD ones and the new Fengmi 4K Cinema Laser Projector and Mijia 4K Laser Projector as new entries to the 4K, we recommend buying the 4K ones because the price difference is too small. You can get a Full-HD ADLP laser project for around $1399 to $1899, meanwhile an ADLP with a 4K native resolution for around $1599 to $2000. The point is that if you are spending that much, why not spend on a better projector with better resolution.

Let’s find out what the new Fengmi 4K Cinema Laser Projector has to offer for a price of $2000:

Starting with the design has a black and greyish chassis made from plastic. One can witness vents all on the sides for excellent heat dissipation, in fact, the best in Chinese projectors. A line pattern can be seen as well on the back where the placement of the ports is situated. Apart from these, the projector looks like another expensive ADLP projector with the projecting lens on the top and a rectangular design. 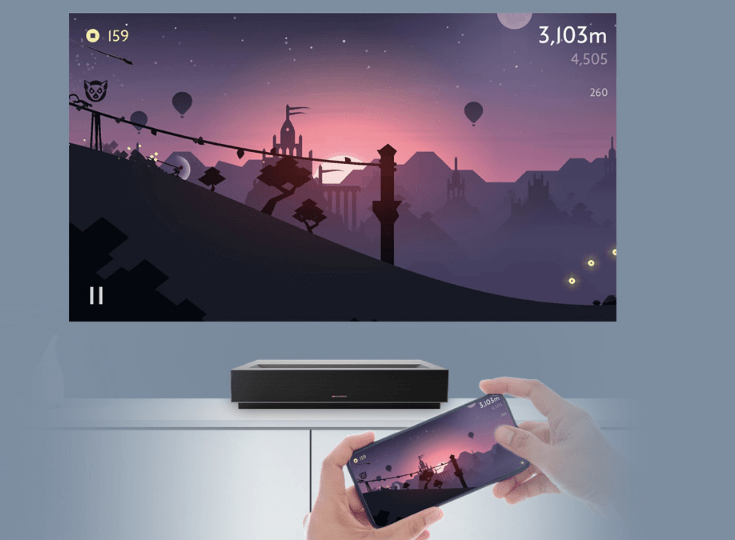 In terms of dimensions, the projector occupies a space of 456 x 308 x 91mm and weighs around 7.5 kg, slightly larger and heavier than Wemax ONE PRO, but smaller than Mi laser projector.

The concept which is also the uniqueness of Fengmi 4K Cinema Laser Projector is the principle of diffuse reflection. This provides eye protection as it reduces the blue light and provides an anti-glare display for no radiation and visual fatigue of the human eye. This is what makes this projector different from other projectors out there in the Chinese market. There’s the IR sensor on both sides of the projector which decreases the brightness of the projector to a minimum if someone passes by, to avoid visual damage. 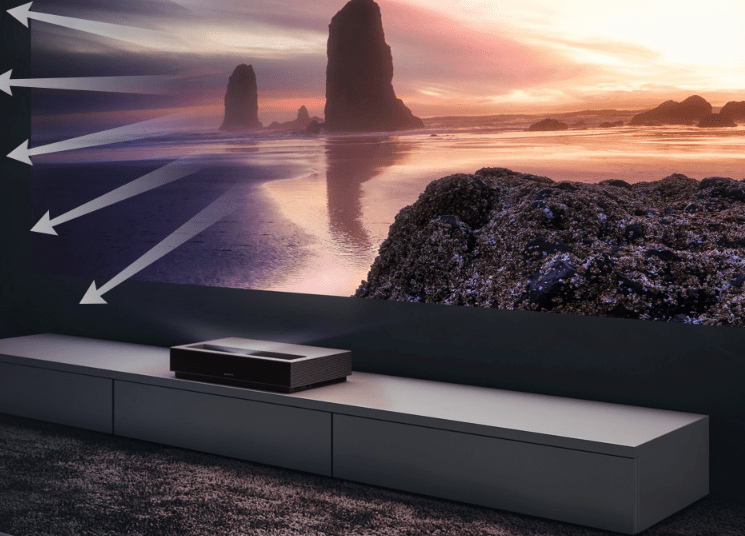 Moving to the projection, this projector has a native resolution of 4K which is four times the Full-HD resolution. Moreover, this means you get a sharp and clear image even on a 150-inch maximum projection display. Like most of the laser projectors, it uses theTexas Instruments (TI) custom DLP digital light processing technology for clearer and brighter picture performance with rich and realistic details. 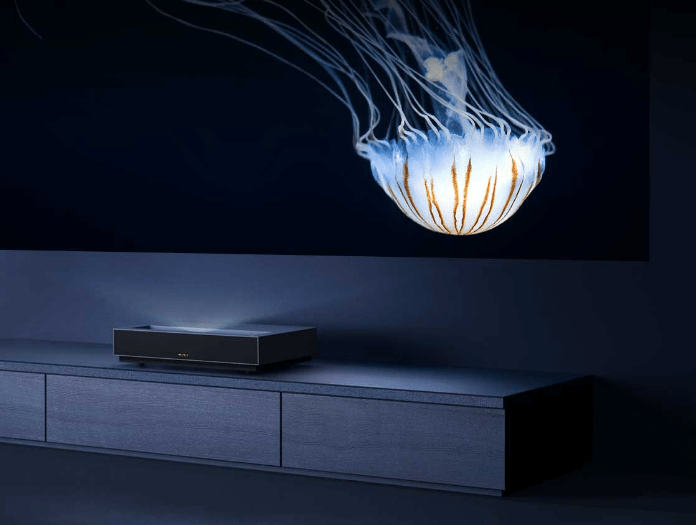 The greatest highlight of the projector Fengmi 4K Cinema Laser Projector is the picture brightness of 1700 ANSI lumens generated from an ADLP3.0 light source with 5000 lumens. It’s equivalent to the much expective Mijia 4K laser projector and allows you to use the projector in daylight as well with readable and clear projection. Along with the incredible 3000:1 contrast ratio and HDR10 decoding, one can expect a rich, colorful projection

Fengmi features a large depth of field ultra-short focus lens of 0.233:1 which is the same as the Mijia 4K projector. You can expect a 150-inch projection with a distance of 30 to 40 cm from the wall. The new ALPD 3.0 laser fluorescence display technology, combined with a red light ratio of 16-18%, makes the reproduction of characters and natural colors more realistic. Since 4K laser projectors have a higher resolution the light source has a life of more than 25,000 hours (half of the 1080p projectors) and can watch more than 10,000 movies of 2 hours.

Moreover, there’s the 8 points keystone correction to adjust your screen with the projection wall.

Chinese projector usually has a poor UI and OS. However, this one is an exception as Fngmi features the MIUI TV OS which is used in Xiaomi projectors, TV boxes, and TVs. If you love a title-based UI similar to Amazon Fire OS, you might love this OS. There’s plenty of content out there, mostly in Chinese. Apart from the Chinese language, you can change it to English as well.

With 64GB of ROM, there’s plenty of space to download apps and store media. Under the hood, there’s the Bluetooth 4.0 module as well to connect to an audio system. The project supports 3D as well but you will need separate 3D glasses. Concerning the sound system, it does support DTS audio. 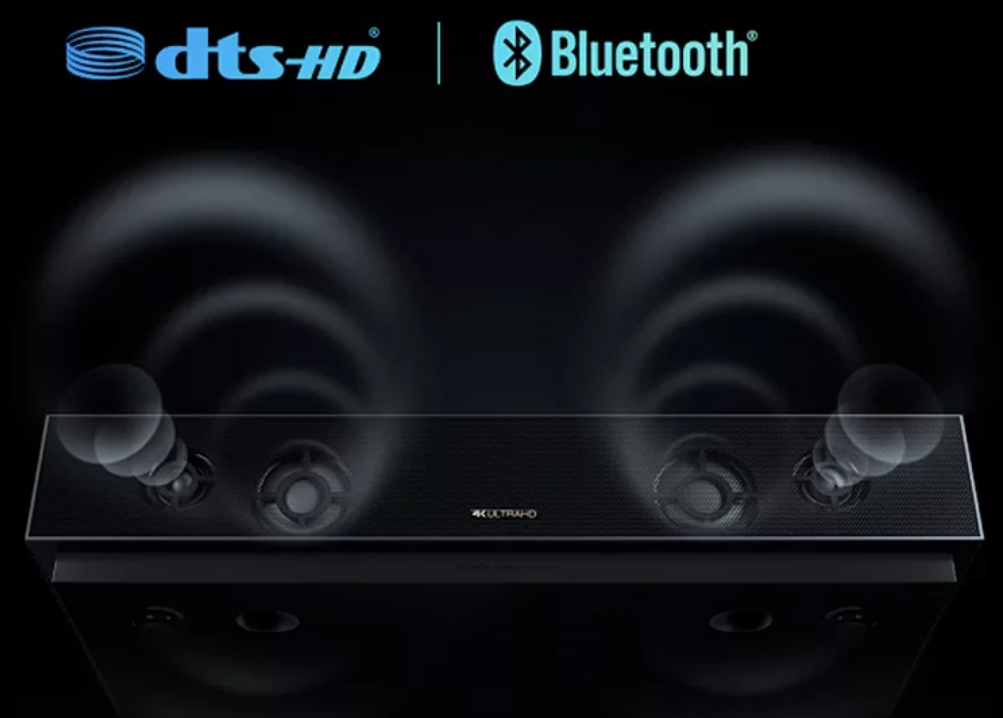 The remote design is pretty impressive as it’s really simple to use along with the voice control feature added to it.

Considering the connectivity, everything is on the back side of the projector including 3.5mm audio jack, HDMI (arc), HDMI 2.0, USB 3.0, LAN, DC in, and power. In the wireless section, there’s the Dual Band WiFi 802.11ac and Bluetooth 4.0.

Thus, Fengmi 4K Cinema Laser Projector provides the same resolution, focus distance, brightness, and contrast, along with the additional feature of eye projector for a much better price.

You can grab Fengmi 4K Cinema Laser Projector for the best price of $1999.99 on Banggood if you apply this coupon code: