Today, Samsung finally releases the fifth generation of DRAM technology on smartphones, the LPDDR5. However, it’s different than the chip to be used inside the Xiaomi Mi 10 which is made by Micron (with the same process of course). After two years of being in the market, LPDDR4x which first debuted in Redmi Note 5 Pro, is going to get replaced by LPDDR5 this 2020. Well, we do know that the next generation is always better than the previous one but the question is: How much is it better than the other two generations? Let’s find out in this LPDDR5 vs LPDDR4x vs LPDDR4 RAM comparison:

LPDDR5 vs LPDDR4x vs LPDDR4 – Everything We Need To Know

The First Phones of Each Generation of LPDDR

Let’s start the LPDDR5 vs LPDDR4x vs LPDDR4 comparison with the launch date of each memory type. LPDDR5 released date was 19 February 2019. On July 18, 2019, and Samsung was the first manufacturer to start production, starting with 12GB capacity / bandwidth DRAM for phones. Though the prototype was announced much earlier in July 2018.

The new LPDDR5 is around 1.5x faster than the LPDDR4x in terms of data transfer. The transfer speed of the LPDDR5 is 51.2 Gbps and a pin clock speed of 6,400 Mbps.

The improved fourth generation ‘LPDDR4x’ is 15% faster in terms of performance (clock speed) than its ancestor ‘LPDDR4’, thanks to the latest 1x nm process technology.

Finally, the original LPDDR4 is the lowest of them. Being 1.2x faster than the previous LPDDR3 generation, it’s almost 1.5x and 1.7x slower than the latest generation. Like said, the older models have a speed of 3733 Mbps, however, the latest one has speed (4,266 Mbps) equivalent to that of the LPDDR4x. K4F2E3S4HA-GFCL has the same clock speed as LPDDR4x, which is 4,266 Mbps.

How Does LPPDR5 RAM Achieve This Much Speed?

Previously, the fourth generation of LPDDR4 and LPDDR4x increased its speed from LPDDR3 by using the 32-bit dual-channel architecture (2 x 16 bit). In case if LPDDR5, we have moved back to the single 16-bit channel, however, the number of banks in each channel has increased to 2x.

Since these are DRAM we are talking about, they are a lot slower than the microprocessors which can create a performance bottleneck. In order to improve the speed and prevent this bottleneck, DRAM uses a technique called prefetch buffer. Increasing the buffer size further improves this performance. 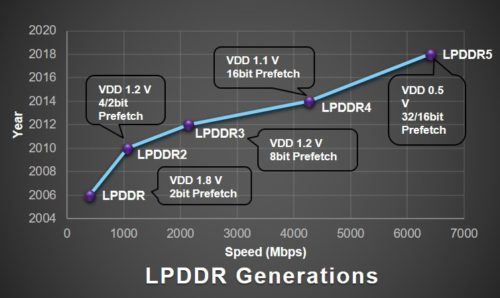 Why was LPDDR4x released even if we already had LPDDR4?

You might have noticed that from 2006 to 2012, we had the LPDDR generations in a sequence. However, this sequence was disturbed when the LPDDR4x arrived. So why was it introduced? The reasons for LPDDR4x manufacturing was:

So as a result, we saw one of the LPDDR4x RAM models to operate on just 0.6V which was almost half of the previous lowest voltage (1.1V). One of Samsung’s LPDDR4x RAMs, the K3UH6H60BM-AGCL also runs on 0.6V with an incredible 48GB capacity.

The LPDDR5 starts with a memory of 12GB. Though even 4 and 6GB of RAM is sufficient in smartphones, however, if the trend of using huge memory continues, we might see phones with 16GB RAM as well.

As its 2020, almost all smartphones have been replaced with LPDDR4x. However, soon, LPDDR5 will replace the LPDDR4x (in around 4 to 5 years). Currently, LPDDR4x is the cheapest one thanks to its availability and compatibility with 64x architecture. LPDDR5 is expensive at the moment and the availability is a problem. As for 2020, we will see the LPDDR5 in flagship phones only.

LPDDR5 vs LPDDR4x vs LPDDR4 – What are the Overall Changes in LPDDR5?

According to Wikipedia, LPDDR5 RAM has the following changes:

Concluding this LPDDR5 vs LPDDR4x vs LPDDR4 comparison, LPDDR5 is definitely the overall winner the credit goes to its features such as DVFS, Deep Sleep Mode, DQ Copy, and WriteX offering up to 45% improvement in power consumption and 1.5x speed of 6,400 Mbps. It’s expensive and is currently featured in flagship phones, however, at the end of 2020, we might see it in the mid-end phones and in 2021 ultimately in low-end smartphones.

What is LPDDR5 RAM?

What is the clock speed of LPDDR5 RAM?

How much faster is LPDDR5 compared to LPDDR4 and LPDDR4x?

LPDDR5 is almost 1.5 times faster than LPDDR4x and LPDDR4

What is the Capacity of LPDDR5 RAM?

What's the Bandwidth of LPDDR5 RAM?