The arrival of a new processor always raises a series of questions about whether it will represent a considerable change with respect to what is in the market. On this occasion, Qualcomm has released its Snapdragon 765 and 865. While the latter is the most powerful, the 765 is presented as a candidate to be one of the best processors for the mid-range of 2020. How is its performance against the best candidate Samsung has 2 years ago, the Exynos 9610? A point of comparison that sounds unfair, but we will see in this Snapdragon 765 vs Exynos 9610 comparison that small news makes big differences.

About release dates, it is obvious that the Snapdragon 765 has a great advantage. The SDN 765 came out a couple of days ago: on December 7. While there are still no devices carrying it, Qualcomm already said that the first phones to include it will be released during the first quarter of 2020. This advantage of dates means that the new mid-range-oriented chip will include technology for 5G communications.

For its part, the Samsung SoC already has considerable time among users, being launched on March 22, 2018, almost 2 years ago. At the technology level, this is positioned in the mid-range, but it is obvious that it does not have some more modern features, such as 5G.

The difference in release dates becomes more noticeable when we compare the lithographs used in both SoCs. The Snapdragon 765 takes the lead with a 7nm LPP EUV process technology, while the Exynos 9610 has just 10nm FinFET. The smaller size in the nanometers makes it possible to build smaller chips but with greater power, and the new EUV technology helps it manage energy consumption much better. 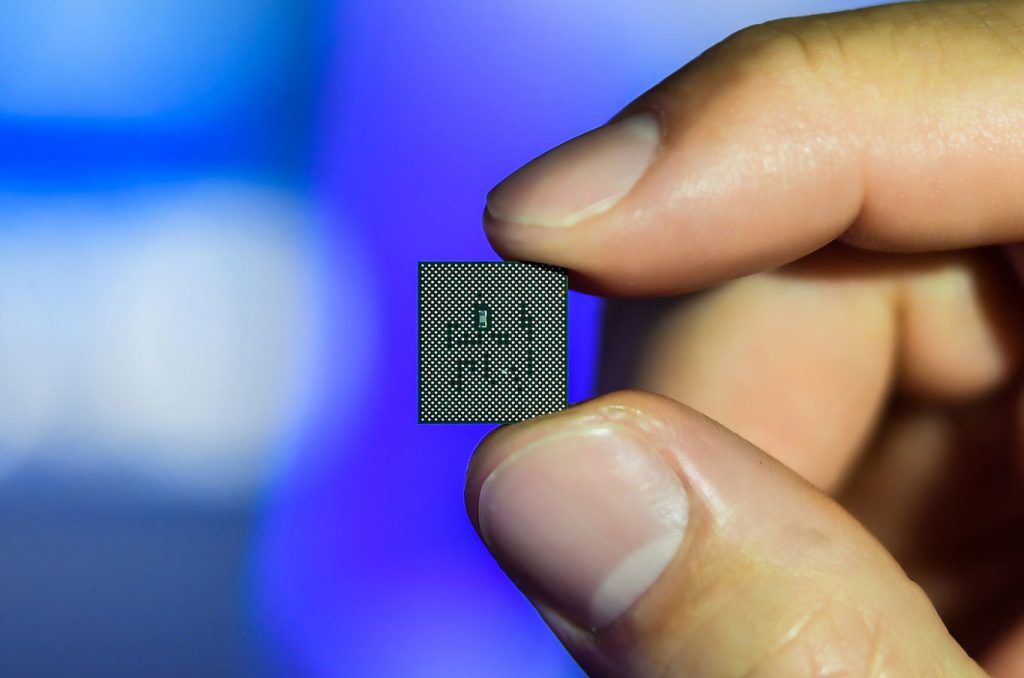 In the section of the CPU, Qualcomm maintains the octa-core architecture, but they have divided the cores in a new way in the 7 series, thus using a new Kryo Prime Cortex-A76 that reaches speeds of 2.3GHz, a Kryo Gold Cortex-A76 at 2.2GHz, and 6 Cortex-A55 cores with speeds of 1.8GHz. First time in this series that the 1-1-6 distribution is seen, so it is expected that at the energy level, the SoC will be highly efficient.

Here we are facing a fundamental difference, and that is that the Exynos 9610, despite its time in the market, has an amazing CPU configuration. It is also based on an octa-core architecture, but this time it uses a more conventional distribution, opting for four Cortex-A73 cores of 2.3GHz and four Cortex-A53 at 1.6GHz. 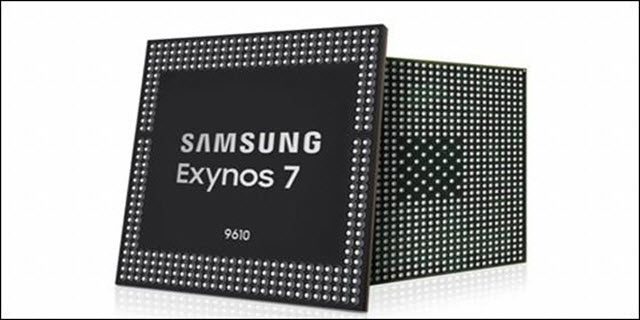 Snapdragon 765 is clearly the winner as since it has Cortex A76 high cores though lesser than Exynos’s Cortex A73 cores. The process technology of SD 765 is better than Exynos 9610. The CPU difference because of the Cortex cores generation gap, and performance is almost 2x.

Again, the Snapdragon 765 updates what has been offered so far by the Qualcomm 7 series of processors. The GPU unit has become an Adreno 620, improving performance with respect to its predecessor by 20% according to the company. It seems hard to believe considering that the Adreno 618 has a clock speed of 825MHz, while the 620 only reaches 750MHz. However, a notable improvement in-memory processing and the change between 8nm and 7nm has a lot to do with this.

The GPU of the Exynos 9610 is again left behind by the age of the processor since it uses a Mali-G72 GPU. As expected, in this case, the lithography is 10nm, and the clock speed is well below the Adreno 620 since it only reaches 650MHz.

Concerning graphics management, the Snapdragon 765 offers a better experience in both fluidity and time of use, making it the clear winner of this section. 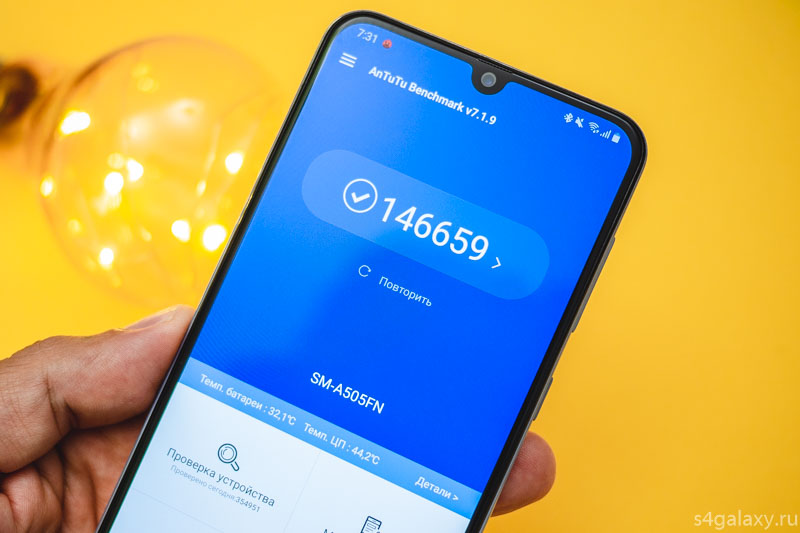 This is a strong aspect in which the Snapdragon 765 wants to dominate. Qualcomm has been dedicated to developing a chip for the mid-range that is compatible with the new 5G technology, which at the moment makes it unique in its kind, offering an integrated X52 modem that reaches download speeds of 3.7Gb/s, and the amazing upload speed of 1.6Gb/s.

Compatibility is also ensured when using mmWave 5G for the United States and sub-6 GHz in Asia and Europe. As an addition, it also has Bluetooth 5.1, slightly improving this section. 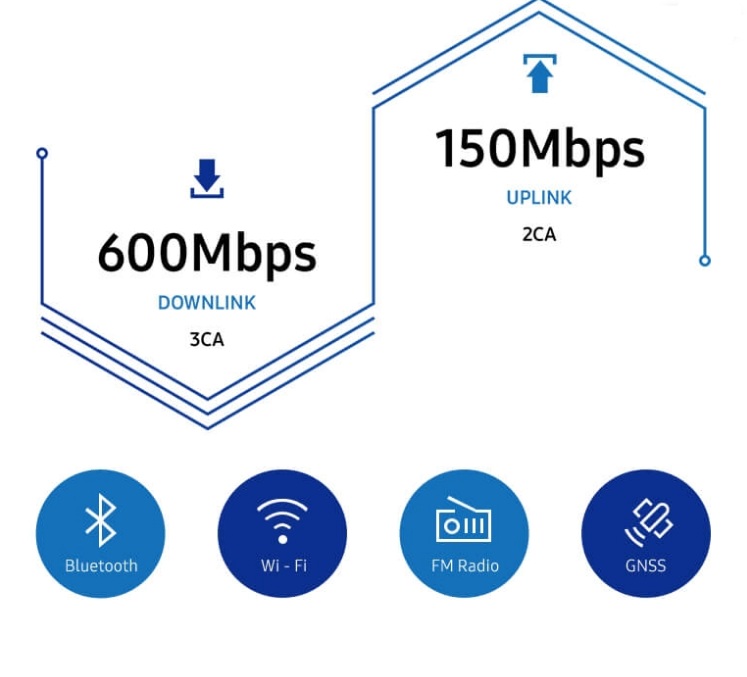 The Exynos 9610 is a bit outdated, using an LTE Cat12/13 modem, which only lets it reach 4G with speeds of 600Mb/s for downloads and 150Mb/s for uploads. Although in the Bluetooth section they are not so far away since it has Bluetooth 5.0.

Let’s talk a little about the chips in charge of the photographic aspect. The new Snapdragon 765 has a dual 14-bit Spectra 355 ISP, which allows it to have sensors up to 192MP (although the best performance is limited to a dual 22MP configuration or a single 36MP camera). Other advantages of the Spectra 355 are the capture of HDR 10+ and the recording of 4K HDR videos in portrait mode. Also, if we are fans of slow motion, it is capable of capturing videos at 480fps with a 720p resolution.

The Exynos 9610 is not far behind in this section since this was a chip that was born to meet the multimedia needs of the moment. In this way, its ISP allows it to easily handle individual 24MP sensors or dual 16MP sensors configurations. Also, slow motion recording is performed at 480fps, but improving the resolution to Full HD (1080p).

The compatibility with displays is another curious point where the Samsung processor still fights back, since the Exynos 9610 works in dimensions of up to 2560x1600p (WQXGA), while the SDN 765 stays in the Full HD+ (which is the screen height x 1080p), although the latter can reach refresh rates of 120Hz.

Although at the moment this section is pure speculation regarding the Snapdragon 765, it is almost a fact that the Smartphones that use it will exceed the $400 tag. This is a section where the Exynos 9610 has 2 years of an advantage since its technology has been devalued to the point where we can find Smartphones of approximately $300 that use it (we refer to the Galaxy A50 and A50s).

We finish this Snapdragon 765 vs Exynos 9610 SoC Comparison indicating that the SDN 765 is slightly better prepared than its 2 years old rival, but the difference is not much when we go to practice.

While it is true that 7nm lithography and 5G connectivity are wonderful when we talk about the mid-high range, the truth is that it does not offer much more in regards to power, so in the end, it will depend if the user is willing to spend a little more to enjoy 5G and greater autonomy.