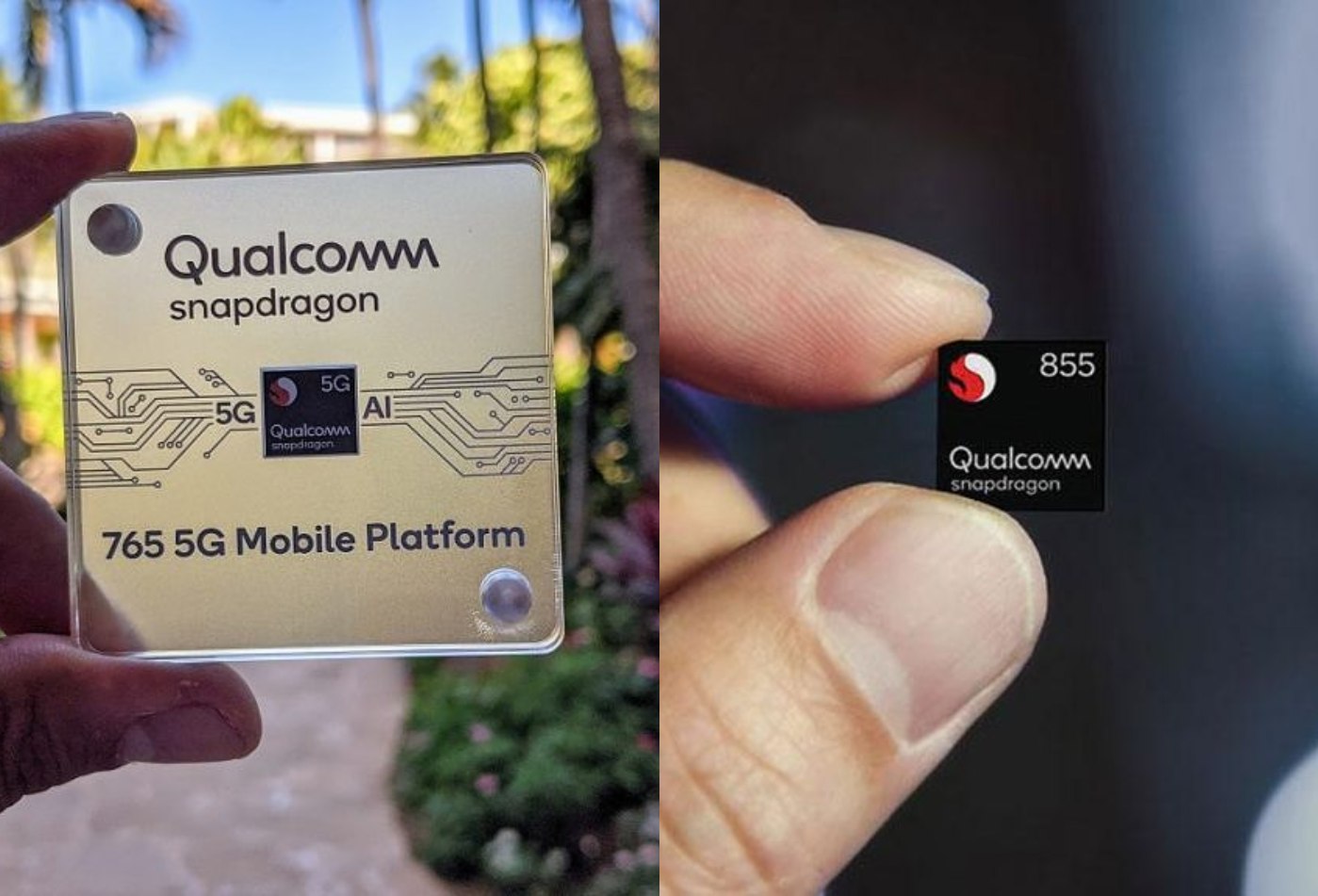 A couple of days back Qualcomm announced the Snapdragon 865 and Snapdragon 765 processor. Snapdragon 865 might have stolen the show, however, the overshadowed SD 765 is not something that should be taken lightly. The successor of the Snapdragon 730 is the first SoC to feature 5G networking on the upper-mid end category based on the same 7nm process similar to the high-end SD 865. The only difference is that it’s based on LPP EUV while SD 865 is the first to use TSMC’s N7P process. Moreover, SD 765 has an integrated modem but the external modem of SD 865 is questionable. Moreover, with the core power distribution lesser than SD 865, we might witness the most durable, power-efficient SoC of all. Well, let’s see how Snapdragon 765 stands out when compared with the ancestor of SD 865, the Snapdragon 855. So, let’s head to the battle between Snapdragon 765 vs Snapdragon 855:

Snapdragon 765 was released a couple of days back on December 7th. It takes advantage of releasing after almost a year since the release of Snapdragon 855. Thus, that is why the SoC is the first to provide 5G networking to the upper-mid end category of smartphones. Not just that features the a much better lithography than Snapdragon 855.

Snapdragon 855 was released in late 2018 (December 5) and the first smartphone to feature it arrived in early 2019. Since the concept of 5G was new at that time, it first was the first Qualcomm 5G SoC with the integrated modem.

Comparing the technology process SD 765 vs SD 855, Snapdragon 765 is based on Samsung’s latest 7nm LPP EUV process. The previous-gen (Snapdragon 730) was based on the Samsung 8nm LPP process, so compared to that it’s a significant improvement as we are getting 7nm as well as the EUV mapping. EUV process enables better power management by leveraging extreme ultraviolet wavelengths to print finer circuits and develop faster and more power-efficient processors. 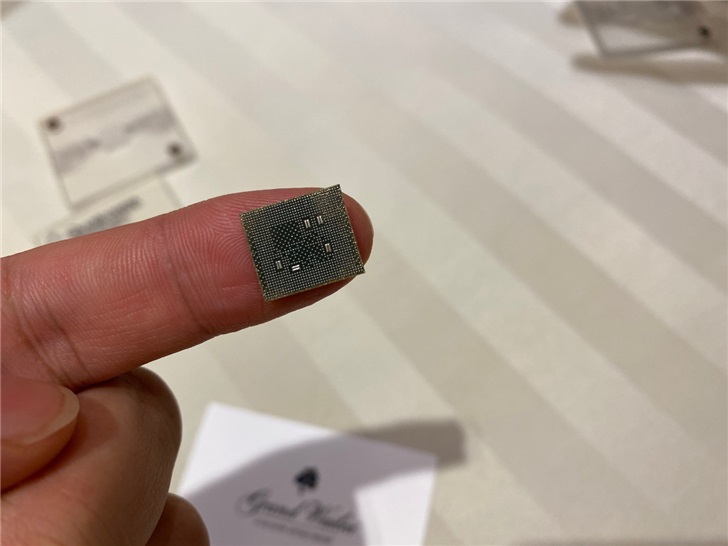 Meanwhile, Snapdragon 855 uses the basic 7nm LPP process which defined the top SoC at its time of release.

Since Snapdragon 865 is out, Snapdragon 855 and 855+ are no longer the company’s top SoCs. We believe that it’s the same tactic they applied when the Snapdragon 7 series was released in 2018 with the Snapdragon 710 based on 10nm which was the same process as of that year’s top-performing Snapdragon 845. It was about to be replaced with SD 855 which was based on the 7nm process. This time the tactic is much better since SD 765 is not only 7nm but also better than SD 855 because of EUV.

Snapdragon 765 uses a Kyro 475 CPU based on a seemingly odd tri-cluster design (1+1+6) which is new in this 7 series. It hasn’t moved to Cortex-A77 but consists of the one high-performance processor which is the new Kryo Prime Cortex-A76 running @2.3GHz, another Cortex-A76 but based on Kryo Gold running @2.2GHz and six energy-efficient Cortex-A55 cores running @1.8GHz.

Moving From Dual-Cluster to Tri-Cluster, Along with the Introduction of Kyro Prime is a Nice Improvement Compared to SD 730

The Snapdragon 855 uses a Kryo 485 CPU based on a semi-custom ARM Cortex technology. It’s a tri-cluster (1+3+4) design consisting of Cortex A76 core at 2.84GHz, three Cortex-A76 cores at 2.42GHz and four Cortex-A55 cores at 1.8GHz. This can achieve up to 45% improvement in performance compared to the flagship platform of the previous generation.

Now in terms of raw performance, Snapdragon 765 is a slight improvement over Snapdragon 730 since it has a prime core while the rest cores remain the same. Combined with the 7nm EUV process let us say that it’s a 10% improvement in the CPU performance.

Qualcomm Planned To Make SD 765 The Most Power-Efficient SoC

Now, when compared to the Snapdragon 855, the SD 855 is more powerful than SD 765, this is because of the better high-performance core which is Kryo 485 almost 540MHz higher than SD 765 and three mid-performance core which has frequency even higher than the highest core of SD 765. SD 855 is a performance beast meanwhile, Qualcomm has planned SD 765 to be the best power-efficient processor to date. So, we have two ways to go to: for better performance, we get SD 855 and for better power management we get SD 765. But in this section we are talking about the performance lead so the winner is:

The Qualcomm Adreno 640 ~675 MHz GPU present in the Snapdragon 855 offers graphics processing speeds up to 20% faster compared to previous generations while maintaining the industry-leading performance per watt.

Even if the Adreno 620 is present in SD 765, still the GPU performance is no match for the Adreno 640. Adreno 620 performance is equivalent to that of SD 845 Adreno 430, only if we combine it with the 7nm EUV process. However, in terms of energy-efficiency SD 765 promises to deliver the best power optimization in graphical performance under the same upper mid-end category. So, Snapdragon 855 might provide a short smooth higher fps gameplay but SD 765 will provide slightly smoother but longer gameplay.

As you can see Redmi K30 scores around 302,847 points. The standard SD 765 will score slightly less because of the low-frequency CPU and GPU, so we can expect it around 290,000 points.

We will compare this with Mi 9 which contains the Snapdragon 855 processor.

Snapdragon 765 supports 5G networking and is the first upper-mid SoC to provide this networking.  Snapdragon 765 integrating the X52 modem (internal) gives 5G download up to 3.7 Gbit/s and upload up to 1.6 Gbit/s. Moreover, it also supports Global 5G networking consisting of sub-6 GHz in Europe and Asia and mmWave 5G in the US.

Along with Exynos 990, Snapdragon 765 provides global 5G Networking support. But Exynos has external modem and SD 675 has Integrated modem

Meanwhile, Snapdragon 855 has an integrated X24 LTE modem for 4G only. 5G is only possible if the manufacturer decides to use the external X50 modem which gives a download rate of 5 Gbit/s and indeed consumes more power and occupies more space. Another minor aspect is that SD 855 supports Bluetooth 5.1 and SD 675 supports Bluetooth 5.0.

Snapdragon 765 incorporates the latest Hexagon 696 Processor for AI tasks and operations. Snapdragon 855 had the previous version which was Hexagon 690. In terms of AI performance, SD 855 is slightly better than Snapdragon 765 with a TOPs score of 7 vs 5.3 respectively. We do have to miss Qualcomm Hexagon Voice Assistant and Qualcomm All-Ways Aware technology replaced with Qualcomm Sensing Hub in SD 765.

SD 675 has Spectra 355 with 2x ISP and SD 855 has Spectra 380. Both support max single camera support up to 192MP. However, Spectra 355 can record HDR 10+ meanwhile, Spectra 380 plays HDR 10+ videos. Spectra 355 also has 4K HDR video capture with portrait mode. Spectra 380 has HEIF photo capture mode as well. Thus, both SoCs have different features from each other so let’s consider this one a tie.

Whereas, Snapdragon 765 which is the first upper-mid end 5G and 7nm EUV SoC might benefit the manufacturer and provide a reason for the price increase. Considering, that flagships such as Reno 2 featured the previous generation which was SD 730 and 730G, we might expect the price range to be around $400+ USD, depending on which manufacturer it is. Thus, in 2020 it is possible to get a much better performing high-end smartphone of 2019 than 2020’s upper-mid 5G smartphone in terms of price.

Concluding this Snapdragon 765 vs Snapdragon 855 comparison, it depends on the user to select if he wants a high-performance SoC or the power-efficient SoC. Moreover, it also depends on the option of selecting 5G networking or 4G networking. The price difference will be slightly greater this time.

Snapdragon 765 vs Snapdragon 855 SoC Comparison – How Good is SD 765?
Summary
It depends on the user to select if he wants a high-performance SoC or the power-efficient SoC. Moreover, it also depends on the option of selecting 5G networking or 4G networking. The price difference will be slightly greater this time.
Reader Rating6 Votes
7.5
SD 765 over SD 855
Integrated Modem and Global 5G
7nm EUV process
SD 855 over SD 765
Better Performance
Cheaper option in 2020
Better AI
8
Total Rating
Start typing to see results or hit ESC to close
Xiaomi Huawei comparison OnePlus Redmi
See all results