Top 5 Huawei Honor Magic 2 Features You Should Be Expecting!

Huawei is close to launching their new Honor Magic 2 on the market. The terminal has something never seen before six full cameras with intelligent functions thanks to its AI. However, the new terminal is not just photographing. In fact, today, Zhao Ming, president of Huawei Honor, has revealed some features in advance of the press conference. And is that himself cannot stand the excitement of everything that the terminal can offer. That’s why today we make a summary of the Top 5 Huawei Honor Magic 2 Features that promise to leave you with your mouth open.

The screen of the Huawei Honor Magic 2 is, according to those who have tried it, a visual delight. And it is that after Liu Ruiqi and Zhou Zhennan experimented it by themselves, they were fascinated with the technological achievement that is a true full screen. From the manufacturer, it is expected that this will be to the liking of all consumers who expected a body-screen proportion close to 100%.

To achieve this gigantic body-screen proportion, among the Huawei Honor Magic 2 Features is it’s a sliding case design that allows it to fully use the front without any peripheral. 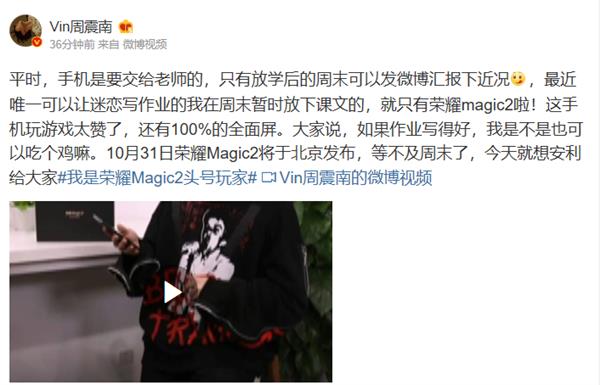 Huawei presents Yoyo, the new artificial intelligence that will live inside the Smartphone to answer all our needs and doubts. The AI has an IQ of 4000 points, and they have promised that this value will continue to grow dynamically.

President Zhao Ming himself showed Yoyo‘s capabilities through an entertaining conversation on Weibo with the AI. The executive qualifies the Smartphone as the funniest smartphone he has seen.

Among the Huawei Honor Magic 2 Features are its six cameras. In addition, the terminal has on its back the inscription “AI VISION“, which refers to its smart capture capabilities. It is expected that the photos have an amazing quality not only by the number of lenses used but also by the processing power of the Kirin 980 chip.

According to official information, the Huawei Honor Magic 2 will use a 40W quick recharge system, which not only guarantees a faster charge of the battery but also will be safer. According to the words of the founder of 3W coffee, Xu Dandan, the recharge speed is so fast that in the time it takes to make a cup of coffee the Smartphone is ready to face the day to day.

As you can see, we have a very complete device in terms of features. On October 31, we will know all the Huawei Honor Magic 2 Features during the conference scheduled for its presentation. At the moment, we can go making the reservation to attend it.