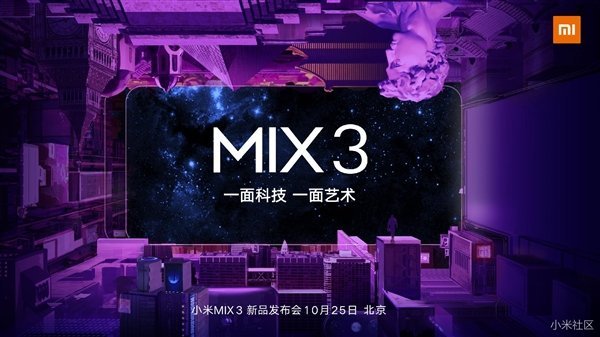 Xiaomi is preparing a great presentation event for the Xiaomi Mi MIX 3. On October 22, the company opened a reservation period at Omnichannel. The Jingdong platform has exceeded 90,000 reservations, a great achievement considering that it has only been available since 8:36 p.m. (20:36). Despite this event, we must clarify that the Xiaomi Mi MIX 3 Release Date has not yet been fully specified.

Let’s talk a little about the Xiaomi Mi MIX 3. According to the most recent renders, the terminal has a screen that achieves a body-screen ratio of almost 100% thanks to its innovative sliding design. They have managed to overcome the three nonexistent edges of the Xiaomi Mi MIX 2S and position themselves as the flagship Smartphone with the best screen of Xiaomi. However, this is not the only novelty, and that is that the Xiaomi Mi MIX 3 Release Date is so important precisely because of the great update it supposes for this range of Smartphones.

The sliding design has allowed incorporating a 24MP front camera, resulting in captures of impressive selfies. In addition, today has come to light the possibility that the Smartphone has a rear camera capable of recording Slow Motion at up to 960fps. Another novelty is the presence of the amazing amount of 10GB of RAM, being the first of its kind to have this amount.

The Xiaomi Mi MIX 3 Release Date represents the release of the first phone with 5G connectivity in the world. Recall that Xiaomi has been working tirelessly in preparing the platform for the 5G.

Another feature that is expected is the support for the fingerprint scanner on the screen, which the company only has in some versions of the Xiaomi Mi 8. This system promises greater security and speed than in the past versions.

There are only less than 48 hours left for the presentation of the Xiaomi Mi MIX 3 this October 25. We will have all the news as soon as they are available about the new technological outburst of the Asian manufacturer.