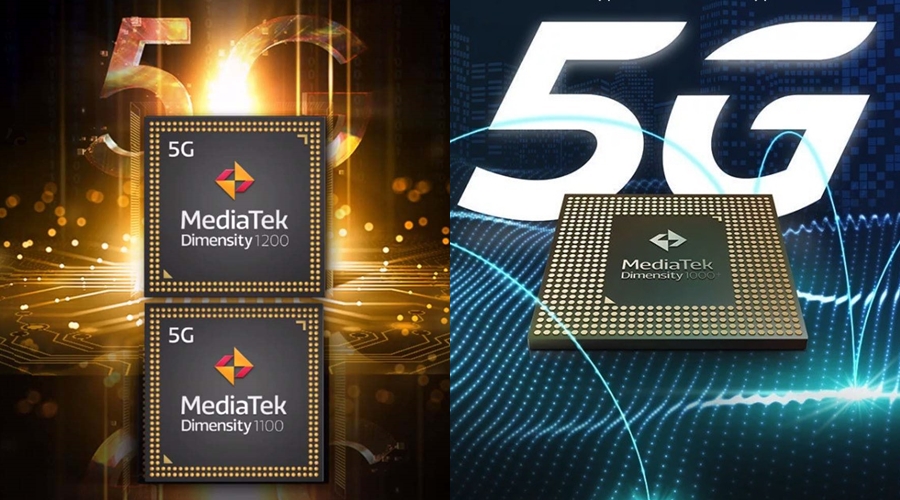 Before we start talking about all the features that these three MediaTek processors present to us, it is worth noting the moment when they were officially determined on the market. The Dimensity 1200 and 1100 were unveiled on the same day a couple of days ago, on January 20, while the Dimensity 1000+ was released last year, on May 7, 2020.

First off let us start with the process technology which determines the power consumption and performance of the SoC. Keep in mind the lower the number the better is the performance as well as battery life efficiency. Now, although the Dimensity 1200 and 1100 are new versions of the 1000+, the reality is that these have more up-to-date specifications, so it is not surprising that these two have a smaller process. The Dimensity 1200 and Dimensity 1100 are based on a 6nm TSMC process, while the Dimensity 1000+ works alongside a 7nm LPP EUV process.

Now, on the other hand, Dimensity 1100 is distributed as follows:

Last but not least, we have the Dimensity 1000+ that is distributed as follows:

As you can see, these three processors have not only the same number of cores, but also have the same type of core as well. Having said that, everything is based on the speed at which these work, and although it is not such a big difference, the speed at which the CPU of the Dimensity 1200 works is higher than that of the rest of the processors, this being the which has the highest power.

Having talked about the above topic, we will go on to comment a bit about their GPUs. Here we can see something very curious, and that is that these three processors have the same GPU, and we’re talking about the ARM Mali-G77 MC9 GPU which is a nine-core GPU and comes under the ARM’s new G77 series of GPU. This new series that Mali-G77 has seems to be a bit more powerful than the series we have seen being launched in the past. Besides, the 1000+ version is also equipped with a HyperEngine 2.0 game optimization engine, which is optimized in terms of game fluency and low power consumption, continuous calls, delays, Bluetooth transmission, and so on.

The graphics are responsible, among other things that any smartphone in which they are located can support a refresh rate of up to 144Hz, being compatible with this type of display more oriented to the ‘gaming’ public.

Well, although much can be said about the power with which a processor has, we will never really know the way and efficiency with which it works until we know what score it obtained in AnTuTu, and that is why we will bring you the scores here of these three processors. In this, the Dimensity 1200 appeared along with a total score of 622,409 points, while the Dimensity 1000+ got a total score of 341,714 points.

Regarding the Dimensity 1100, there is still no score, although it won’t be many days for it to arrive.

On the other hand, the Dimensity 1000+ incorporates the 5G discussed above with downloads of up to 4.7Gbps in addition to WiFi 6, Bluetooth 5.1, and support for FM radio. Dr. Li Yanji, deputy general manager of MediaTek’s wireless communications business unit, said that Tianji 1000+ is equipped with MediaTek 5G UltraSave power-saving technology, and the average power consumption is 48% lower than that of competing products at the same level.

Regarding the section of cameras, the Dimensity 1200 is capable of supporting image captures up to 200MP, with a five-core HDR-ISP for processing. The chipset supports dual 32MP and 16MP configurations and features 4K HDR video capture. With that being said, the Dimensity 1100 has a 108MP main camera but also supports a dual 32MP and 16MP camera. The company also admitted that these new SoCs include different functions such as ‘AI-panorama Night Shot’, ‘Multiperson Bokeh’, and noise reduction. With that being said, video decoding supports the AV1 codec, which supports 10-bit content with up to 4K resolution, but so far no support for 8K video recording is offered.

For its part, in the photographic section, the Dimensity 1000+ will allow the use of single sensors of up to 80MP, or dual 32MP and 16MP megapixels. Also, the chip-level MiraVision image quality engine it has can efficiently complete the real-time partition operation of 4K images, improve the high dynamic range of the video, enhance the ordinary SDR video source in real-time to the HDR display effect, and greatly improve the contrast, brightness, and details of the video image and clarity.

Finally, to see what is the best option among these processors at the budget level, we have to know the price of the phones they are on. About the Dimensity 1200 and Dimensity 1100, there is still no knowledge about which phones will have these processors, but among the brands that will bet on these new SoCs, we have the world-famous Realme and Redmi, who have already announced that they will be two of the first companies to launch Smartphones with these SoCs.

Select Dimensity 1200 if you want:

Select Dimensity 1100 if you want:

I hope you loved this Dimensity 1200 vs Dimensity 1100 vs 1000+ comparison. Which one is your favorite SoC? Let us know in the comments.