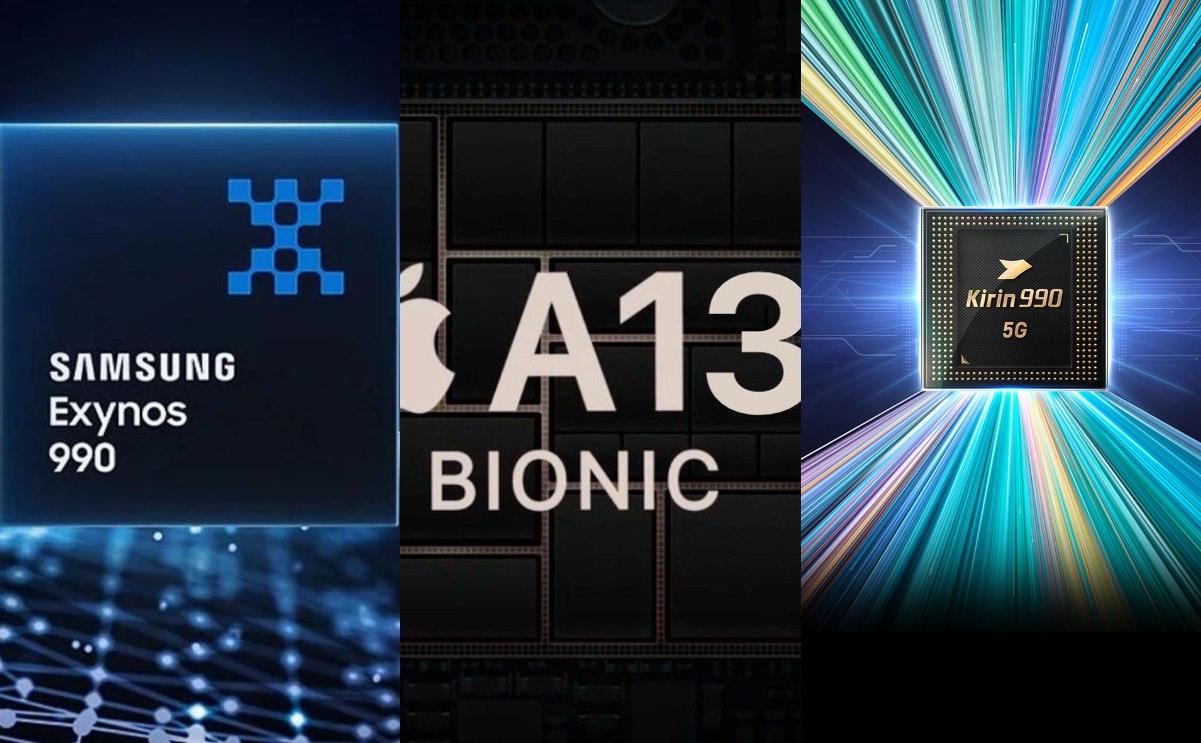 Today, we will be doing the Exynos 990 vs Apple A13 Bionic vs Kirin 990 5G comparison. This year, in 2019, the 7nm process is continued which was introduced in late 2018 in high-end SoCs. However, the lithography of such SoCs was upgraded from LPP to the EUV process which enabled better power management by leveraging extreme ultraviolet wavelengths to print finer circuits and develop faster and more power-efficient processors. All of these are based on the 7nm process, however, Apple A13 Bionic undergoes the TSMC process while Exynos 990 and Kirin 990 are based on the EUV process. These three SoCs will be featured inside almost 70% of the high-end smartphone market leaving 30% to Snapdragon 865 next year. So, without any further wait, let’s move to the comparison of Exynos 990 vs Apple A13 Bionic vs Kirin 990 5G.

Apple A13 Bionic was released on September 11 powering the new iPhone 11 Pro. It featured the lithography (simply 7nm TSMC) of those SoCs present at that time which was Snapdragon 855, Kirin 980 and Exynos 9820. Maybe that is the reason why we don’t see any EUV lithography in A13 Bionic. Like its usual strategy, the company plans to use EUV next year in iPhone 12 Pro. Apple says that it is always two generations ahead of Android SoCs.

A couple of days after the A13 release, Hisilicon released it’s new Kirin 990 on September 19. The SoC was known as the first 7nm+ SoC based on the EUV process. Note: Exynos 9825 was the first EUV based processor but featured an 8nm process.

Exynos 990 was released on October 24, almost after a month of the A13 and Kirin 990 release. Thus, it covered the 8nm process of the first EUV processor (Exynos 9825) to the latest 7nm+. Now only the Snapdragon 865 is yet to release and after its release, the next batch of processors which would be 5nm will hit the market in late 2020.

As previously said, the Exynos 990 is based on 7nm EUV process, upgrading from the former 8nm Exynos 9825 and Exynos 980.

Apple A13 Bionic because of releasing before Exynos 990 and Kirin 990 5G, relies on the previous 7nm process by TSMC incorporating 8.5 billion transistors on the board.

However, Kirin 990 5G also features an EUV process, however, they have improved the 7nm process slightly making it 7nm+. Huawei claims that this one is the first SoC to feature above 10 billion transistors (10.3 billion transistors) but on a board area which is 36% less compared to the previous generation. This saves manufacturers some space in their flagships now.

Moving to the CPU section of this Exynos 990 vs Apple A13 Bionic vs Kirin 990 comparison, Exynos 990 and Kirin 990 has a tri-cluster design (2+2+4). Starting with the Exynos 990, there are two high-end Samsung’s cores known as M5. These two M5 cores activate during high load and are 20% faster than the previous M4 cores (Exynos 9825). This means that the single-core performance of the Exynos 990 is much better than that of Exynos 980 and 9825 as well as the Kirin 990 5G. After this, there are two Cortex A76 mid-end cores, followed by four Cortex-A55 power-efficient cores that are running all the time. The clock speed of the cores isn’t mentioned by Samsung.

Moving to Kirin 990 5G, it has two high-frequency Cortex-A76 cores running @2.86 GHz followed by two mid-frequency Cortex-A76 cores running @2.36 GHz. There are four energy-efficient Cortex-A55 cores running @1.8GHz. It’s sad to see that there’s no Cortex-A77, and for this Huawei claims that A77 core will be much effective in 5nm process not in 7nm. Currently, Exynos 990 will perform much better in high load situations as compared to Kirin 990 5G. Moreover, there’s the standard Kirin 990 processor without 5G which has a 7nm process and a lesser mid and lower cores frequency than the 5G version.

Last but not least is the Apple A13 Bionic which has a dual-cluster design (2+4), there are 2x Vortex (lightening) cores at a primary clock speed of 2.65 GHz and 4x Thunder cores at a primary clock speed of 1.59 GHz. Despite not having EUV and octa-cores, the Apple A13 Bionic performance appears to be surpassing that of Exynos 9825, Snapdragon 855+, and Kirin 990 5G (see the Benchmark section). Maybe, Apple has incredible hardware and software optimization. However, I will consider Exynos 990 to be a winner here because of the new M5 customized core, EUV, and the tri-cluster design. Why not Apple A13? It’s simple because there’s no EUV, lower frequencies, and dual-cluster design.

Currently, there’s no database of Exynos 990 present at Geekbench. However, we do believe that with M5 cores, it might slightly surpass Apple’s A13 Bionic but in single-core performance only. Apple might retain the highest multi-core score.

Heading to the GPU part, Exynos 990 features the latest GPU by ARM which is Mali-G77 Mp11 GPU. It’s the first GPU which is based on the Valhall architecture ARM claims that Mali-G77 has a 20% performance uplift and 20% power efficiency gain in comparison to the previous generation which is Mali-G76.

Kirin 990 5G uses the previous generation of the ARM Mali-G77 which is Mali-G76 MC/MP16, but this time with 16-cores to enhance the gaming performance. However, remember this that the more cores will generate more heat and consume more power and since the GPU has not been upgraded to Mali-G77 which offers better process and power management. That being said, with Kirin Gaming+ 2.0 software combined, the performance is increased by 30% while optimizing energy efficiency by 46% compared to the previous generation which was Mali-G72. I do love the gaming optimization done by Huawei with the Turbo Boost technology which unlocks the maximum potential of the GPU but still, Mali-G77 is 20% better overall than Mali-G76.

Apple A13 Bionic works based on a design created by the American company, which not only has four cores but also comes with a speed of 1100MHz. Like always, Apple doesn’t reveal much about the CPU, GPU, and other hardware aspects. It says that it’s the most powerful GPU of all time on a smartphone.

Since the frequency is not announced of the ARM Mali-G77 GPU in Exynos 990, we can’t find whether it’s clocked or overclocked. However, I’m still sure that it won’t surpass the 1100MHz frequency of Apple’s A13 Bionic given the fact that Mali-G76 was running at 720MHz and the next generation is 20% better than it. However, it is much better than Kirin 990 5G SoC.

We haven’t included the benchmarks right now since there’s no benchmark available for Exynos 990. We will add the AnTuTu and Geekbench section once Exynos 990 benchmarks surface the internet

The new SoC launched by Apple, the Apple A13 Bionic, has many good features, but without the help of artificial intelligence, this development could not have been achieved. The improved AI power (an eight-core Neutral engine used in this processor is able to enable advanced photo and video editing tools, this being an extra point. The eight-core Neutral engine is 20% faster than the previous one and uses 15 percent less power.

Kirin 990 5G is the most intelligent SoC to date

Meanwhile, Samsung has also started to improve its NPU department featuring the new Dual NPU design. Exynos 9825 is the first one to use it and it will be slightly improved in the Exynos 990 SoC. Currently, Exynos 9825 ranks at only no.7 in AI scorings with 17,000+ points. However, I don’t think it will be able to beat the score set by Kirin 990 5G. The company claims that the Exynos 990 is capable of scoring 10TOPs in computational throughput. However, they didn’t make it clear if the score was of NPU and ISP combined or of NPU only.

Exynos 990 vs Apple A13 Bionic vs Kirin 990 – Connectivity Comparison

Unlike the recent high-end processors, Apple A13 Bionic doesn’t provide either the external or internal 5G modem. It looks like we have to wait till next year for Apple to run 5G networking on their devices. Moreover, there’s the 4G LTE modem present continued from Apple A12 and it also has dual-band Wi-Fi, Bluetooth 5.0, USB 3.1 and type C, NFC, and GPS. 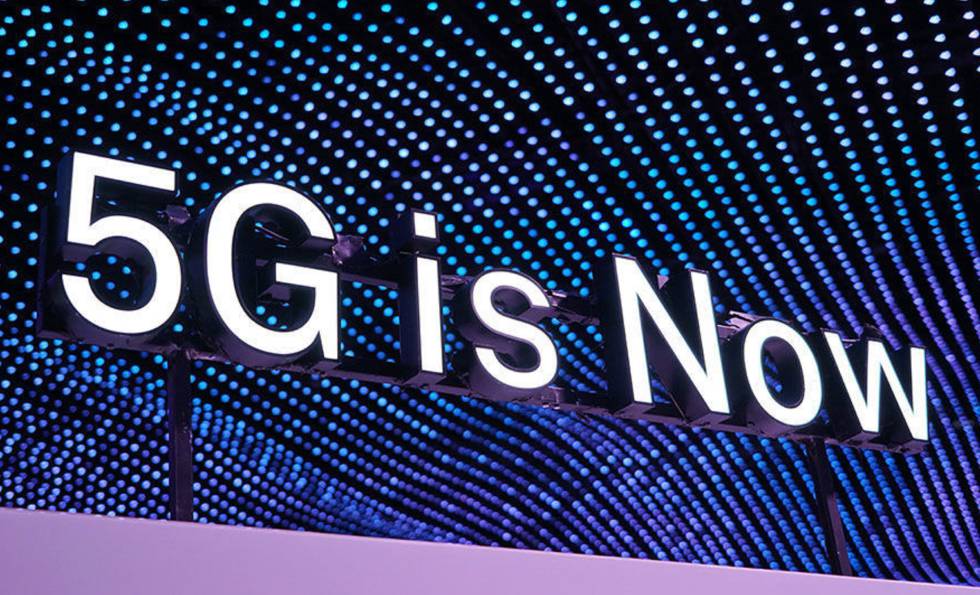 Kirin 990 5G has a peak download speed up to 2.3Gbps and upload speed up to 1.25Gbps. It’s the first integrated SoC to support both SA and NSA networks based on sub-6GHz. Sadly, we don’t see mmWave support in it as Huawei is banned in the US. Meanwhile, for the standard Kirin 990, Huawei decides to stick with the 4G networking which gives up to 1.6Gbps Download speed with 5CA and 4x4MIMO. Sub 6-GHz is a much common approach used in Asia and Europe right now and the integrated 5G in Kirin 990 supports it.

Exynos 990 uses the external Exynos Modem 5123 (external) with a downloading speed of 7350 Mbps which is the highest in 5G connectivity to date. However, no upload speed was mentioned by Samsung. Despite the overwhelming fast download speed, we can’t deny the fact that an external modem takes more footprint as well as power than the integrated one. However, Exynos 990 does support the mmWave 5G networks, so Exynos along with upcoming Qualcomm SD 865 will be a good option to go for 5G in the US.

Getting in terms of budget, each processor is exclusive to its own brand, unlike the Snapdragon processors. Exynos 990 will be exclusive to the Samsung Galaxy S series and Note series, incorporating inside the Galaxy S11 flagship coming next year. Apple A13 is featured inside Apple iPhone 11 Pro MAX right now. Kirin 990 5G is used inside Huawei Mate 30 5G and hopefully in upcoming Honor phones as well.

Let’s compare the price of the SoC based on the price of the phone. Apple always has the highest price of any smartphone they release consider the price-over-performance ratio. Then comes Samsung which uses Exynos 990 in the upcoming Samsung Galaxy S11 estimated to have a price of over 800 to 900 euros. Huawei Kirin 990 5G will be the most budget-friendly SoC incorporating 5G networking as well as the high-end performance. Why? Because Huawei along with its sub-brand Honor is known to provide the best price-to-performance smartphones in the list and promises to continue in 2020 as well.

Right now Apple A13 Bionic tops in performance and benchmarks. Apple has the highest single-core and multi-core performance until Exynos 990’s M5 core debuts in a phone (might be better in single-core only). Apple A13 has the most powerful GPU in a smartphone ever. Exynos 990 performance and benchmark isn’t out yet. In terms of process, Exynos 990 and Kirin 990 5G takes the lead thanks to the EUV process missing in Apple 13. Moreover, A13 doesn’t support 5G so investing in an iPhone (much expensive than other phones) in 2020 will be pointless as 5G is to go commercial that year. As far as the Exynos 990 vs Kirin 990 is confirmed, Exynos 990 will have better core performance, slightly better GPU, more features (Wifi 6 support, 108MP single camera support, and HDR 10+), highest 5G download speed. Meanwhile, Kirin 990 5G has integrated 5G modem, fastest AI performance, and best price-over-performance ratio. So the winner is:

*1 point given to each in case of tie*

We hope you loved our Exynos 990 vs Apple A13 Bionic vs Kirin 990 5G comparison. Did we miss something? What is your favorite SoC? Let us know in the comment.