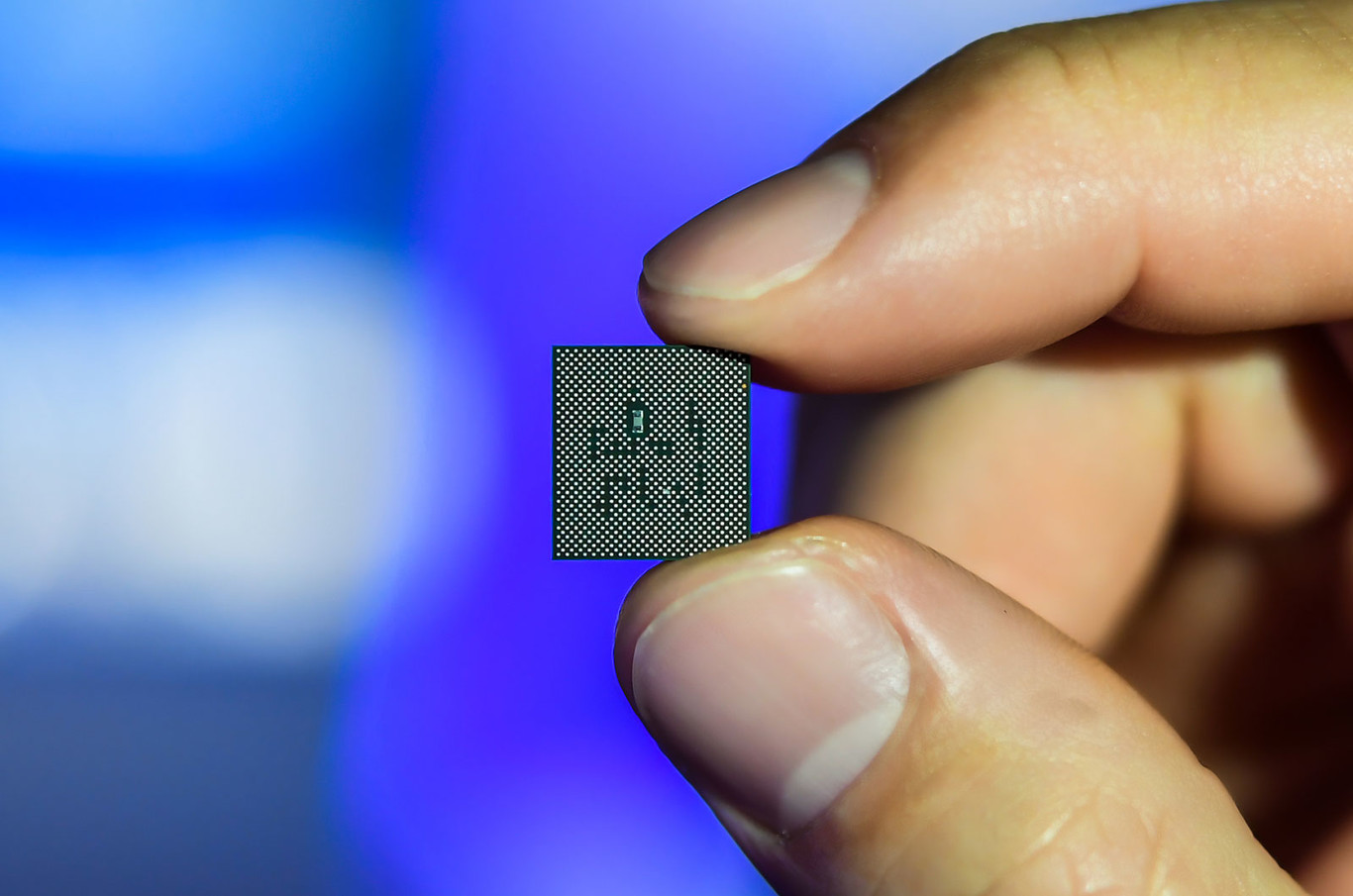 The new Snapdragon 460 turns out to be a game-changer for the budget-friendly smartphones such as the Redmi series, Realme C series and so on. It has the same GPU as SD 665 and the CPU performance is almost 70% more than the previous generation which is Snapdragon 450. It’s for the first time that we are seeing such a drastic improvement apart from Qualcomm’s 30% to 50% improvement between to generations. However, let’s see if the Snapdragon 460 can compete with the veteran mid-end Snapdragon 625, in this Snapdragon 460 vs Snapdragon 625 SoC comparison. 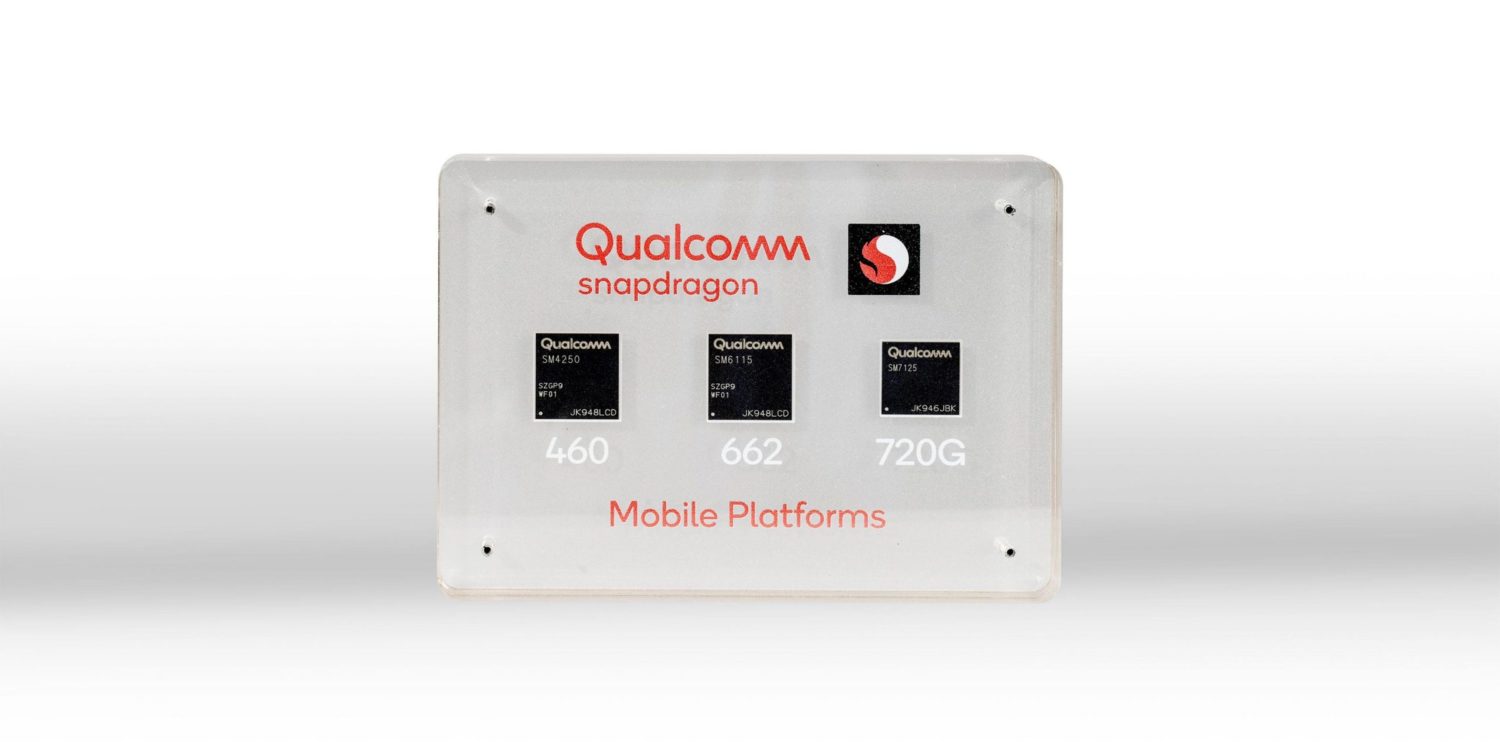 Release Date of Both SoCs

Meanwhile, Snapdragon 625 is relatively an old SoC released all the back on February 11, 2016. Back then, the integrated X9 LTE modem, the dual rear camera support had just started trending.

Snapdragon 625 because of releasing in early 2016, 4 years back, is based on the 14nm LPP process. Back then the 14nm process was considering something incredible especially when it comes to mid-end SoCs because we also had the most powerful Qualcomm SoC based on the 14nm process (SD 820 and 821). Maybe that is the reason why we saw phones featuring Snapdragon 625 for more time when compared to other SoCs. The SD 625 was featured in smartphones from mid-2016 to early 2018.

Previous SoCs from Snapdragon 4-series featured default ARM CPU configuration. However, that’s not the case with Snapdragon 460 as it proudly boasts about the customized Kryo 240 CPU configuration which is a game-changer. It’s an octa-core configuration but this time instead of all low-end cores we have a dual-cluster arrangement (4 + 4). SD 460 has four Cortex-A73 cores running @1.8GHz and four Cortex-A53 cores with an unknown frequency.

Thanks to the introduction of Cortex-A73 which might be an old core but still much better than A53 core and the use of 11nm process, we witness an improvement of 70% increase in performance over the previous Snapdragon 450. We should also note that it’s also the first in the 4xx-series to support LPDDR3 up to 933 MHz and LPDDR4X up to 1866 MHz

On the other hand, Snapdragon 625 has an octa-core design with simply one cluster of eight Cortex-A53 cores running at a slightly overclocked speed of @2.0GHz (yes, the default speed for A53 is 1.8GHz). Like said previously, at that time, this was considered mid-end performance with the 14nm LPP process. 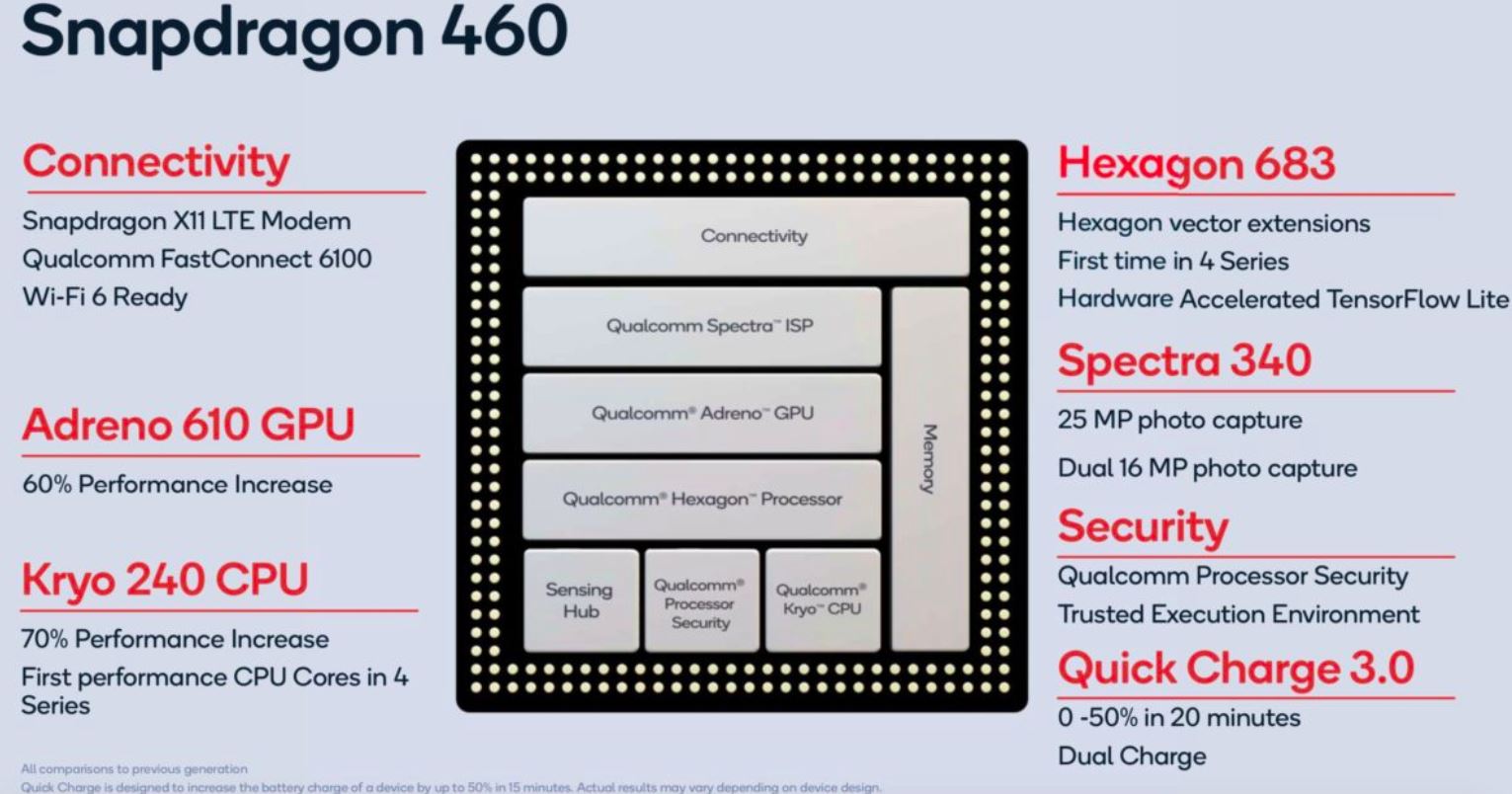 So, which one to select (Snapdragon 460 vs Snapdragon 625) when it comes to CPU performance? The answer is clear – Snapdragon 460 because it has Cortex A73 cores (Kryo 240) which is enough to lead the way through all low-end SoCs.

Moving to the GPU section, a much greater improvement is seen because Snapdragon 460 features Adreno 610 the same as from Snapdragon 665. Remember similar to the Cortex A73 use in CPU, the Adreno 610 is from 6xx series of Adreno GPU which is used in mid-end SoCs (6xx-series). However, this is the first time that we witness a GPU used in the 4xx series from the 6xx series.

This enables the low-end smartphone users to enjoy the same gaming experience as they do on the Snapdragon 665 and other mid-end phones. The GPU performance is 60% better than the 2 years old SD 450 which used a much older Adreno 506 running at 600 MHz.

Snapdragon 625 uses Adreno 506 running at 650MHz. The GPU is the same as SD 450. Only the frequency is slightly higher. Compared to SD 460’s Adreno 610, the GPU performance of SD 460 is way ahead from SD 625, just because it’s a next-level generation with better process and speed.

Snapdragon 625 has an AnTuTu v5 score of around 60,000 points which was considered mid-end at that time, however, in 2020 even the low-end devices have a better score than this.

Snapdragon 625, during the time of its release, had AI learning still in the developmental phase, so we don’t witness an AI engine here. Though it does have Hexagon 546 as the DSP.

2020 is the year when 5G will start commercializing. However, sadly, we don’t have that much 5G supported phones in the market. Leave the low-end and mid-end smartphones for now, because we don’t even have enough 5G phones in the upper mid-end and high-end category. If there are some then they are much expensive than the 4G variants. Thus, for a low-end SoC releasing at the start of 2020, we don’t witness 5G network support in Snapdragon 460. It’s fine because 5G isn’t widespread till now and the low-end phones don’t even need one in 2020 because of their price difference.

So, we have an X11 LTE modem in SD 460 with download up to 390 Mbit/s and upload up to 150 Mbit/s. For a low-end X11 LTE modem is fine given the fact that SD 450 had its previous generation which was X9 LTE. Though, I would have appreciated X12 LTE modem which has double the download speed (600 Mbit/s). Moreover, though the modem isn’t that much of the highlight, other connectivity features are which includes the use of first-ever WiFi 6 standard support, FastConnect 6100, NAVIC, and dual-frequency GNSS for better GPS position.

Snapdragon 625 uses the X9 LTE modem with download up to 300 Mbit/s and upload up to 150 Mbit/s. SD 625 also used optimizations and features such as Qualcomm TruSignal Antenna Boost which is also used in SD 450 and a much better solution in SD 460.

Talking about the ISP, SD 625 had an ISP supporting dual camera up to 13MP and a single camera up to 24MP. Meanwhile, SD 460 has Spectra 340 which is one of the latest ISPs before Spectra 380 and 480. It’s even better than most ISPs from 6xx-series and even 7xx-series. Why? Because it has single camera support up to 48MP and dual camera support up to 16MP. That’s more megapixels of detail and better capture in extremely low light.

Meanwhile, Snapdragon 625 at the time of its use in Redmi Note 4 and other phones was priced around $120 to $200. However, we won’t see any new releases with SD 625 because it’s around 4 years old. The phones featuring SD 625 might be available as used pricing all below $100. Since SD 625 is not available these days, we should consider this a tie as there’s nothing to compare.

Ending this Snapdragon 460 vs Snapdragon 625 SoCs comparison, to be honest, the 4-year gap between both these SoCs marks the pace of progress moving from 14nm to 11nm, Cortex A53 to Cortex A73, Adreno 506 to Adreno 610 in the low-end category. Clearly, Snapdragon 460 is the winner here because of better CPU performance, better GPU performance, AI-enabled, better DSP and ISP, and advanced connectivity features such as WiFi 6.

We hoped you loved our Snapdragon 460 vs Snapdragon 625 SoCs comparison. Want to know anything about these SoCs? Let us know in the comments. Plus, don’t forget to rate the comparison down below.