With the introduction of MIUI 12, it introduced us to the new ‘Super Wallpaper’ which we believe will be the next trend for Android smartphones for the upcoming years. The details, the effects, and the iconic bird-eye view with so much details, will make it the best replacement for the Live wallpapers as well as static ones.

Super Wallpaper – What is It?

More importantly, a super wallpaper can be set for the unlock, lock, idle screen, and home screen of the phone all at once. Surprisingly, the transition and the animation for each screen will be different. One can also choose different landing locations, hence there will be more animation changes.

These animation effects are all rendered in real-time based on the Unity 3D game-level engine.

To understand the super wallpaper, we will need to see the example of it which is available on MIUI 12.

MIUI 12 – The First UI To Use The Super Wallpaper

The MIUI team believes that the screen will become part of the design of the phone, so a new feature has been added to MIUI 12, which is the super wallpaper. We have a new MIUI 12 wallpaper with as called the ‘Mars’. It’s one of the best wallpapers we have seen so far. You can experience it as well by looking at the images below.

Xiaomi said that the wallpaper is based on Mars exploration data and high-precision 3D modeling to restore the Martian landform. Each set of wallpaper can choose the landing place of high-precision modeling, and derive more changes. After turning on the dark mode, the planet will also enter the night, and the visual experience will be more perfect.

In addition to Mars, there is the earth super wallpaper. 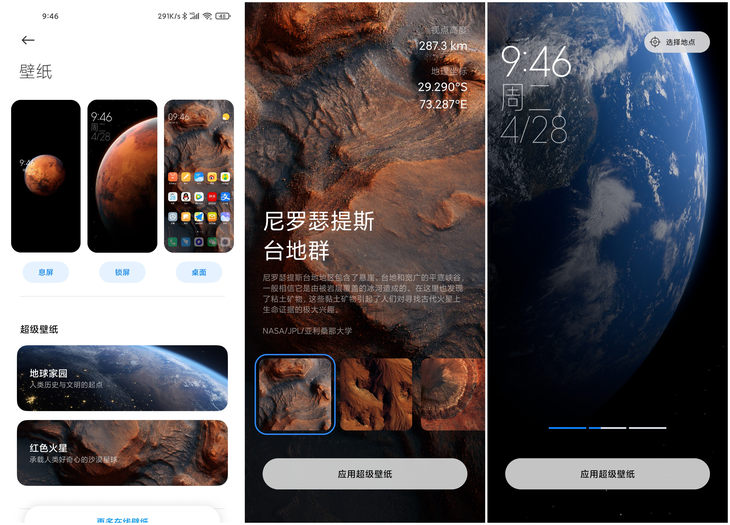 Although the super wallpaper looks like a wallpaper, it breaks the boundary from the idle-holding state to the lock screen interface and the home screen, and the unlocking experience is amazing.

Taking Mars as an example, it is a pattern of Mars in the idle-holding state, and the screen of the unlock interface expands to the close-up view of the planet. Once we move to the home screen after unlocking, it becomes a bird’s-eye view of Mars on the home screen. We can also choose different landing locations, hence there will be more animation changes.

These animation effects are all rendered in real-time based on the Unity 3D game-level engine. Through the official data from NASA, the planet’s landform state is restored with high precision, which makes the entire unlocking process very surprising.

So, this is what a Super Wallpaper is and you can see how it is different from a live wallpaper.

If you have Xiaomi phones running on MIUI 11, you can grab the two super wallpapers of MIUI 12 ‘Mars’ and Earth from the links given below.

Note: These super wallpapers are only compatible with Xiaomi MIUI phones. You can set them on the non-Xiaomi phones via Google wallpaper, however, only the home screen will be set with the live wallpaper but there will be no locked screen, unlock screen, and idle screen live wallpapers and no unlocking and locking animations.

Let’s wait for the third-party applications to develop super wallpapers and even other smartphone manufacturers, and see which one has the best super wallpaper.