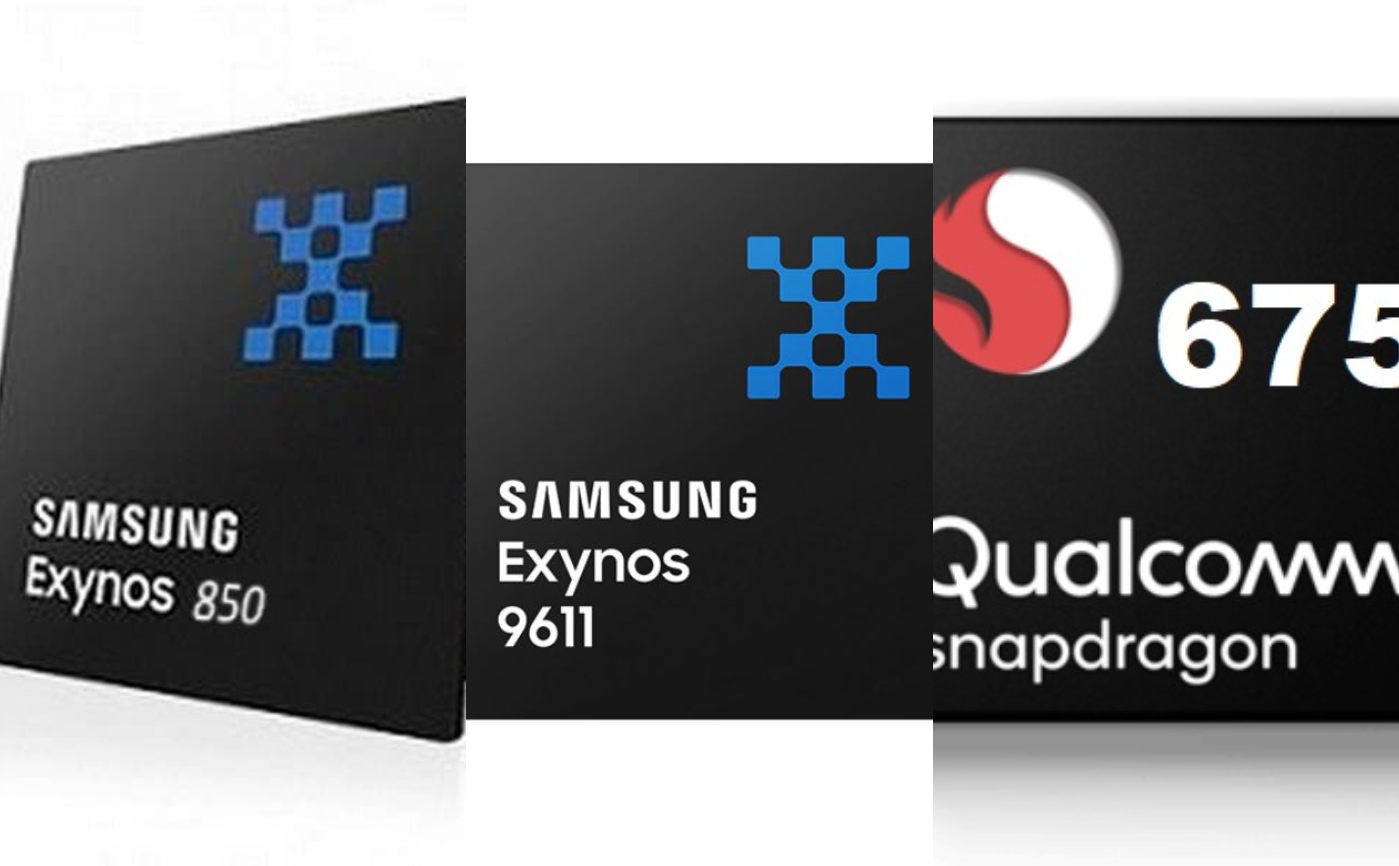 Recently, a couple of days back, Exynos 850 debuted in Samsung Galaxy A21. It’s a lower mid-end SoC for budget-friendly Samsung phones. Let’s see how well does it perform against two other SoCs, a one-year-old Exynos 9611 and a two-years-old Snapdragon 675, in this Exynos 850 vs Exynos 9611 vs Snapdragon 675 comparison.

Exynos 850 release date is May 31, 2020. The first phone to use it is the Samsung Galaxy A21 and boasted about the 8nm Samsung LPP process on a budget-friendly SoC.

Exynos 9611 was released on September 19, 2019. It was one of the first Samsung mid-end SoCs which introduced AI and AI-features in the camera. It also improved gaming with some optimizations.

The upgraded version of SD 670, the Snapdragon 675 molds from the 11nm LPP FinFet technology. It’s surprising to see that it when down to this process instead of continuing the 10nm process as in its ancestor SD 670.

If we compare all three SoCs, the new Exynos 850 has the best process (lower the better). This makes the SoC be more energy efficient when compared to the other two SoCs.

The SoC has an octa-core design and a seemingly odd core distribution which is a single cluster (8) of eight energy-efficient Cortex A55 running @2.0GHz. Sadly, there’s no high-performance Cortex A76. So, we can expect that this SoC is made for the budget-friendly energy efficient phones, but let’s hope that the Cortex A55 might not limit the performance at high-performance demanding scenarios.

The GPU of the Exynos 850 is ARM Mali G52. The cores haven’t been specified but we believe it is the MP6 version with 6 cores. The frequency of the cores is also unknown. Since this SoC is in the low-end category, one can expect to run entry-level and mid-performance demanding games at the lowest settings.

Exynos 9611 includes a Mali-G72 MP3 GPU that is responsible for enhancing graphics. This is also the same GPU that is present in the Exynos 9610, but it has a faster clock speed than its predecessor. It also has some gaming optimizations done to improve the overall gaming experience.

Finally, we have the Snapdragon 675, which has downgraded GPU from Adreno 615 moving to Adreno 612 which features 14nm lithography, speed of 850MHz. However, Qualcomm assured that the Snapdragon 675 performs considerably better than the Snapdragon 670 in real-world scenarios. Thanks to the built-in-game enhancements, for example, reduce “janks” or stutters by over 90 percent during gameplay. However, looking at the benchmark score, the performance is still behind SD 710 and SD 670 despite having a higher frequency but an old process. This is the only downside of this SoC if we compare it to SD 670.

If we compare all the three GPUs, Exynos 850 will have the lowest graphical performance, then comes Exynos 9611 which although have half the cores but a much better G7 series high-end GPU. The GPU of SD 675 is the winner here because of better clock speed and GPU process, along with some incredible real gaming scenario-based optimizations.

Samsung Exynos 850 doesn’t have a dedicated NPU. On AI-Benchmark the score of Exynos 850 isn’t mentioned, but we believe that it will be in bottom 10.

With that said, the Exynos 9611 processor has a built-in artificial intelligence engine consisting of a vision processing unit. It enables the phone that has this processor to have smarter cameras that are capable of delivering better results on their own under different conditions. The chipset offers artificial intelligence capabilities through deep learning technology. It has an AI score of 5500 points.

SD 675 has Hexagon 685 as the DSP which enables AI-camera, AI-monitoring, AI battery management, and more AI-based featured. It scores around 9443 points on AI-benchmark almost 2x of Exynos 9611 AI. 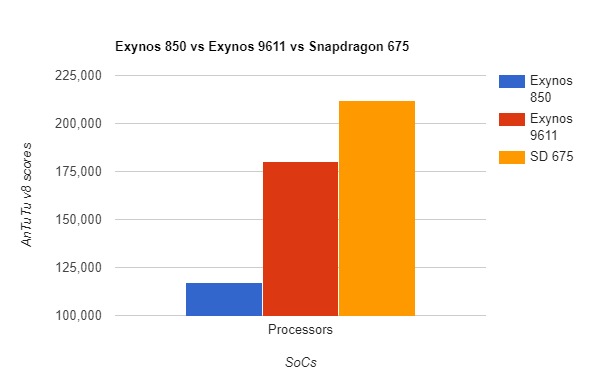 Exynos 9611 also supports 4G networking with Cat. 13 UL and a much better Cat 12 DL. The upload speed is the same but the download speed is almost 4x which is around 600Mbps. Other connectivity features include Wifi 5, Bluetooth 5.0.

Snapdragon 675 has Spectra 250L processor as ISP. This is compatible with dual 16MP cameras, a single 25MP camera, and support for the single 48MP camera sensor with the use of MFNR. It can also support the 192MP single camera sensor. There are other enhanced options as well such as triple-camera support for capturing super-wide images or up to 5x optical zoom, portrait mode, and breakthrough limitless HD slo-mo recording – at up to a dazzling 480 fps (frames per second).

Since Snapdragon 675 supports higher single camera support up to 192MP and has more camera features, it’s the winner of this section.

Qualcomm SoCs aren’t limited to a specific manufacturer. Snapdragon 675 phones are still releasing such as the TCL 10 Pro and Vivo V17 Pro which are priced around $290 to $390. There are used phones as well which can go as low as $150.

Looking at the price, Exynos 850 phones should be the cheapest among all three SoCs phones. However, Snapdragon 675 offers the best price-to-performance ratio.

The new Exynos 850 might be Samsung’s best energy-efficient phone, however, for smartphones, energy-efficiency isn’t the only thing that matters, high-performance at specific times, AI, and better graphics also matters. In terms of raw performance, CPU, GPU, AnTuTu scores, camera, and connectivity, Snapdragon 675 leads the way among these three SoCs.

We hope that you loved our Exynos 850 vs Exynos 9611 vs Snapdragon 675 SoCs comparison. Which one of the SoCs is your favorite? Let us know in the comments.