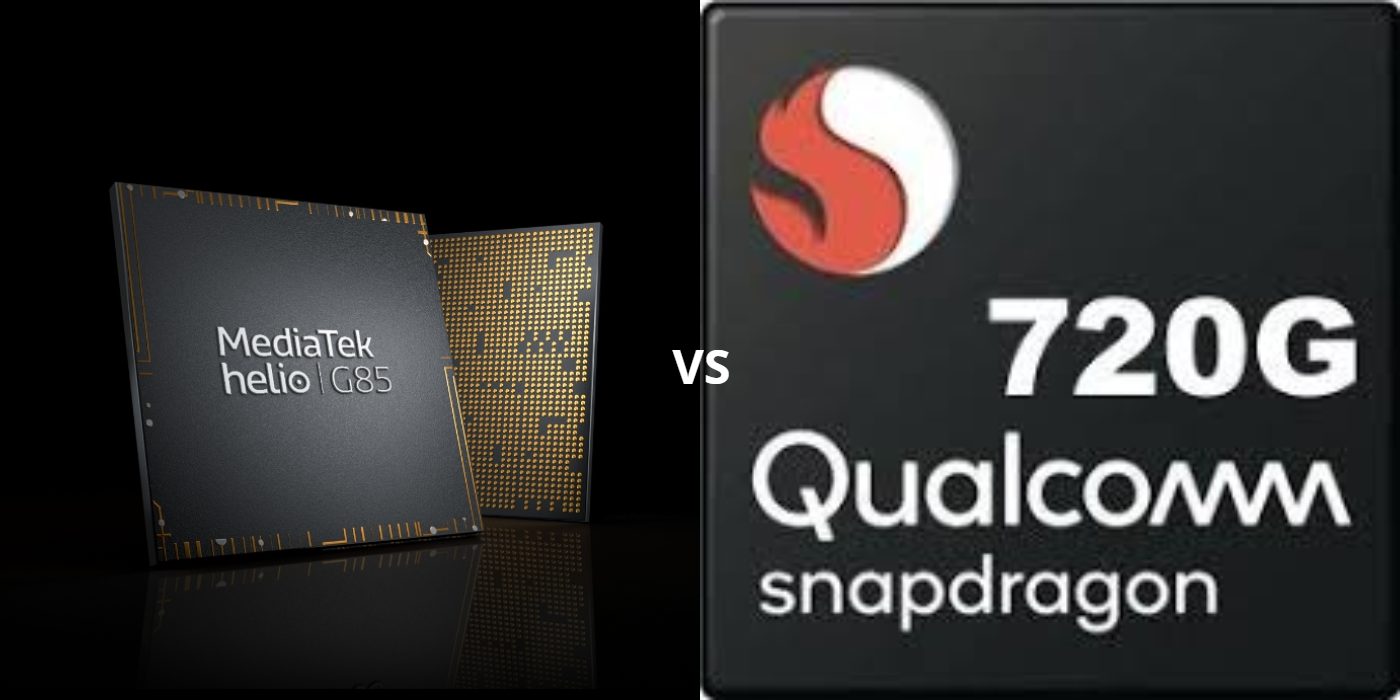 Yesterday, MediaTek released a new SoC. The Helio G85 is another addition to the gaming SoC ‘G’ series and now we have five gaming SoCs in total including the G70, G80, G90, G90T, and the newly released G85. If we see according to the numbering, the Helio G85 should be a mid-way, higher than the G80, and less powerful than the G90 and G90T. So, we know that it’s targeted at almost the same price as the gaming variant, Snapdragon 720G. However which SoC to select? So, we will be answering this question in this Helio G85 vs Snapdragon 720G comparison. Compared to the Snapdragon 765G and the Helio G90/G90T, these SoCs provide mobile gaming experience under a much affordable. 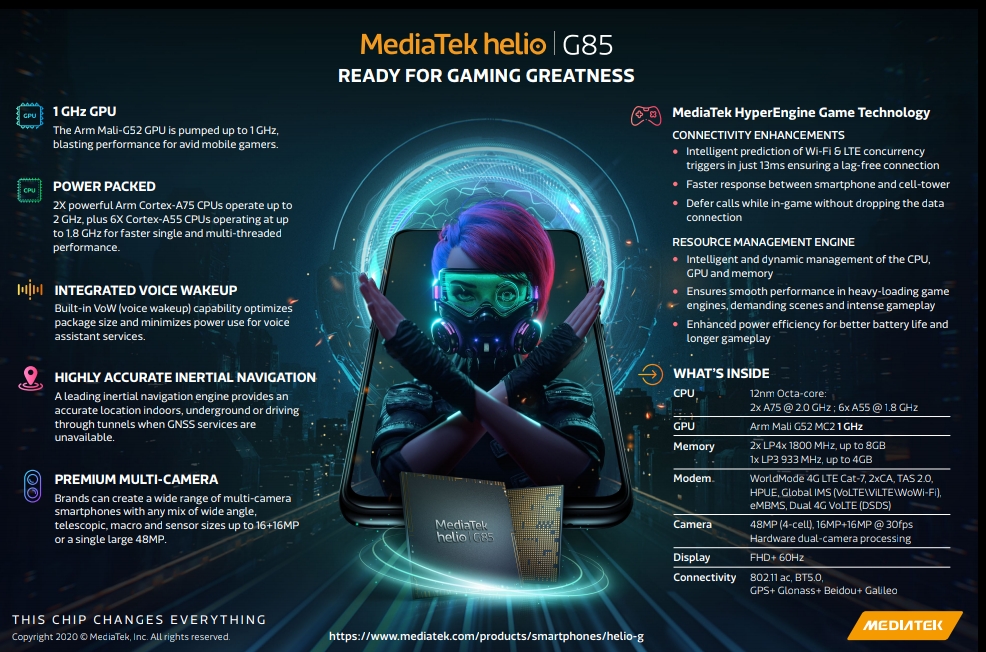 Want to see what’s the difference between the SoCs in the G series, see our:

Helio G85 vs Snapdragon 720G – Which One Is The Best Mid-End Gaming SoC?

The release date of Helio G85 is May 5, 2020. It brings features like a 1 GHz GPU on a mid-end SoC optimized for gaming. In short, it’s a G80 SoC with a slightly powerful and tweaked GPU.

Snapdragon 720G release date is January 20, 2020. This was one of the first mid-end gaming SoCs by Qualcomm.

Let’s start the real Helio G85 vs Snapdragon 720G comparison with the process section. Despite releasing after Snapdragon 720G, it features a 12nm FinFET TSMC process which is somewhat disappointing concerning it’s a gaming SoC. It’s ancestors G70 and G80 also has the same process.

Snapdragon 720G features the 8nm LPP Samsung process which is a nice upgrade over its ancestor SD 710 and SD 712 which were based on the 10nm LPP process.

So, it’s clear that there’s a large difference in terms of process. The process of the SoC is the most important aspect which determines the energy efficiency, power per watts, heat dissipation, and stability over time of the CPU, GPU, and AI. Snapdragon 720G is way better in all these aspects.

Helio G85 CPU is the slightly improved version of the G70 and the same as G80, with a slight difference in the frequency of the Cortex A55 cores. It’s a dual-cluster octa-core design. Similar to G70 and G80, it has two Cortex A75 high-performance cores running @2.0GHz meanwhile, there are six Cortex A55 power-efficient cores however, there’s the frequency increase of 100MHz (compared to G70) making them run @1.8GHz.

As we can see that not only the frequency of the two high-performance cores of SD 720 is 300MHz higher than G85, but also the cores aren’t the same. SD 720G features Cortex A76 while Helio G85 feature Cortex A75. There are 25% and 35% increases in integer and floating-point performance, respectively and memory bandwidth increased 90% in A76 relative to the A75. Meanwhile, the power-efficient Cortex A75 in both SoCs have the same frequency. So, the CPU performance difference between G85 and SD720G is obviously similar to the process of technology, where SD 720G leads the way.

Helio G85 has the greatest highlight which is the GPU. It’s an ARM Mali-G52 2EEMC2 overclocked at 1 GHz. If you think that it’s much of an accomplishment, it’s older brother has the same GPU running @0.95GHz. So, the G85 is slightly powerful in terms of GPU while in all other aspects it’s the same as Helio G80. However, we have additional tweaks and optimizations such as HyperEngine Game Technology to improve the gameplay. Moreover, a 60Hz display is also supported.

Whereas, . The Snapdragon 720G comes with the Adreno 618 GPU. The frequency is unknown but we expect it to be around 600 MHz to 720 MHz. SD 720G gives us the opportunity to get the most out of the games along with their HDR10 capabilities along with Select Snapdragon Elite Gaming features.

Honestly, ARM Mali-G52 is good as a budget-friendly mid-performance GPU, however, it’s outdated and underpowered even at 1GHz frequency. The GPU used in Helio G90/G90T is so much better because of the 10 core design and Mali-G76 GPU and might barely beat Snapdragon 720G’s GPU. However, comparing Mali-G52 and Adreno 618, there’s a huge difference of around 50,000 to 70,000 points on the AnTuTu GPU section.

You might think that MediaTek SoCs are good in terms of AI performance. They are! But not the G series. The Dimensity 1000 and 1000L tops the top 4 Ai-Benchmark SoC rankings, however, the G80, G70, and G85 are not great since they have an AI score of 4.781 points only. This is because they don’t have a dedicated APU. Still, there are features like AI cameras, etc.

Helio G85 during the official press conference revealed the AnTuTu Benchmark V8 score to be around 206,000 points on Redmi Note 9. Just for comparison, the G80 has a score of around 200,000 points and the only difference we see here is due to the increased frequency of GPU which is a negligible 6,000 points.

Meanwhile, Snapdragon 720G has an AnTuTu Benchmark V8 score is around 276,500 points. The difference can be seen in the CPU, GPU, and MEM.

However, Snapdragon 720G’s connectivity is way better and even surpasses the highest Helio G90T SoC in the G series by MediaTek. It has a X15 LTE modem (download: Cat 15, up to 800 Mbit/s; upload: Cat 13, up to 150 Mbit/s). Apart from this, the other connectivity features are insane for a mid-end SoC. These include the first mid-end SoC to introduce the WiFi 6 standard. Other include Bluetooth 5.1, Dual-frequency GNSS, NavIC, and FM radio.

So, because of the better modem, WiFi 6, dual-frequency GNSS, and NavIC for satellite position, Snapdragon 720G is simply the best SoC when it comes to connectivity, especially if you aren’t concerned with 5G networking.

Helio G85 supports dual-camera 16MP+16MP, or a single camera of 48MP resolution. It also has AI camera features as mentioned in the specs sheet.

Snapdragon 720G has the legendary Qualcomm Spectra™ 350L image signal processor, Dual 14-bit ISPs. It has a single camera support of a freaking 192 MP and 16MP+16 MP Dual camera support at 30fps with MFNR/ZSL. It also has AI features similar to G85.

As you can see that camera support of SD 720G is way better as it supports a single camera of 192MP which is surprising for a mid-end SoC. Helio G80 only supports 48MP single camera.

Helio G85 other features include Intelligent VoW (voice on wakeup). It supports LPDDR4x RAM @1733 MHz and a 60Hz Full-HD+ display.

So, SD 720G supports beater RAM speed. Meanwhile, G85 has additional features like 60Hz and Intelligent VoW. So we consider this section a tie.

Both SoCs aren’t limited to a single smartphone manufacturer like the Exynos is to Samsung and Kirin is to Huawei. That is why it is possible to see a wide price range of phones incorporating these two SoCs. The price ultimately depends on the manufacturer, for example, Redmi and Realme will offer better prices and OPPO and Vivo. However, comparing both SoCs with each other along with the available phones, Helio G85 featured in Redmi Note 9 is priced at $199 and Redmi Note 9 Pro at $299. So, Helio G85 is cheaper, but the ultimate price-to-performance SoC is SD 720G.

Concluding this Helio G85 vs Snapdragon 720G comparison, the choice of selecting an SoC or more likely Redmi Note 9 or Note 9 Pro depends on the budget you have. Snapdragon 720G is way better in terms of everything, the CPU, process, GPU, AnTuTu, AI, Connectivity, and camera. If you do not consider the budget, SD 720G (Redmi Note 9 Pro) is the best option you can grab right now. It even has a better price/performance ratio compared to Helio G85. As for Helio G85:

So, if you have the choice of buying G80 or G85 with a nice price difference go for Helio G80. Helio G85 is simply not worth it until or unless the price is fine.

We hoped you liked our Helio G85 vs Snapdragon 720G comparison. Want to know anything? Let us know in the comments!

The comparison was made based on the information taken from these sources: