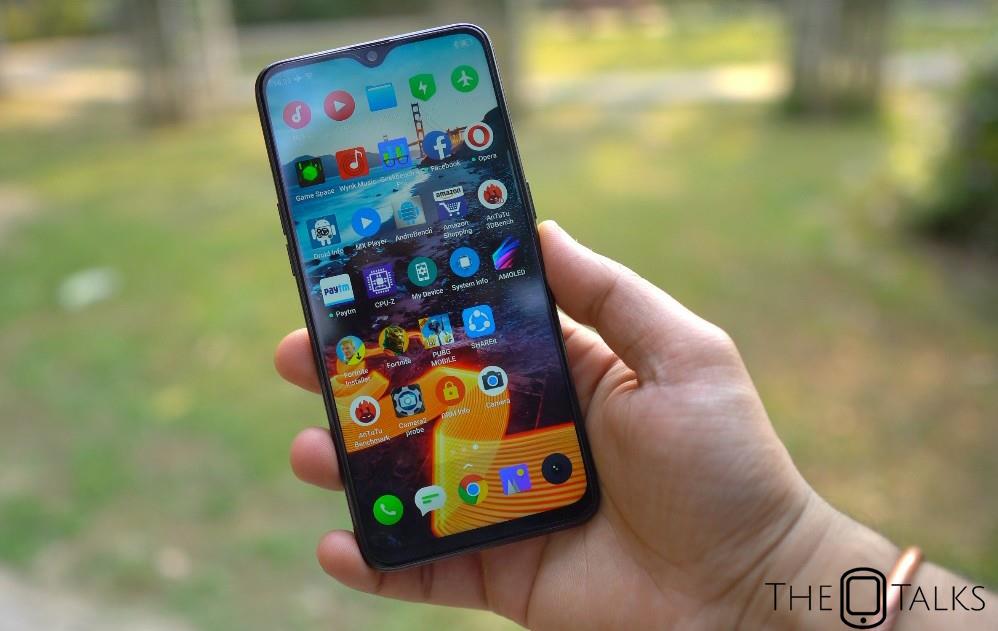 Realme, an OPPO sub-brand, which was released last year, has always been a tough competitor to the budget-friendly sub-brands such as Redmi from Xiaomi, in India. From the start, Realme has been able to provide some hard times to the Redmi and Redmi Note flagships. The previously released Realmi 3 was successful in providing competition to Redmi Note 7. However, the question is: Is the newly released Realme 3 Pro able to provide that sort of competition to Redmi Note 7 Pro, Vivo X27, and Vivo V15 Pro? Considering the hardware configuration, it is categorized in the upper mid-end tier and definitely has an affordable price. We really didn’t believe that this phone with an SD 710 has a price tag of just Rs.13,999 INR. Is Realme 3 Pro really that good? Let’s find out in this Realme 3 Pro review! 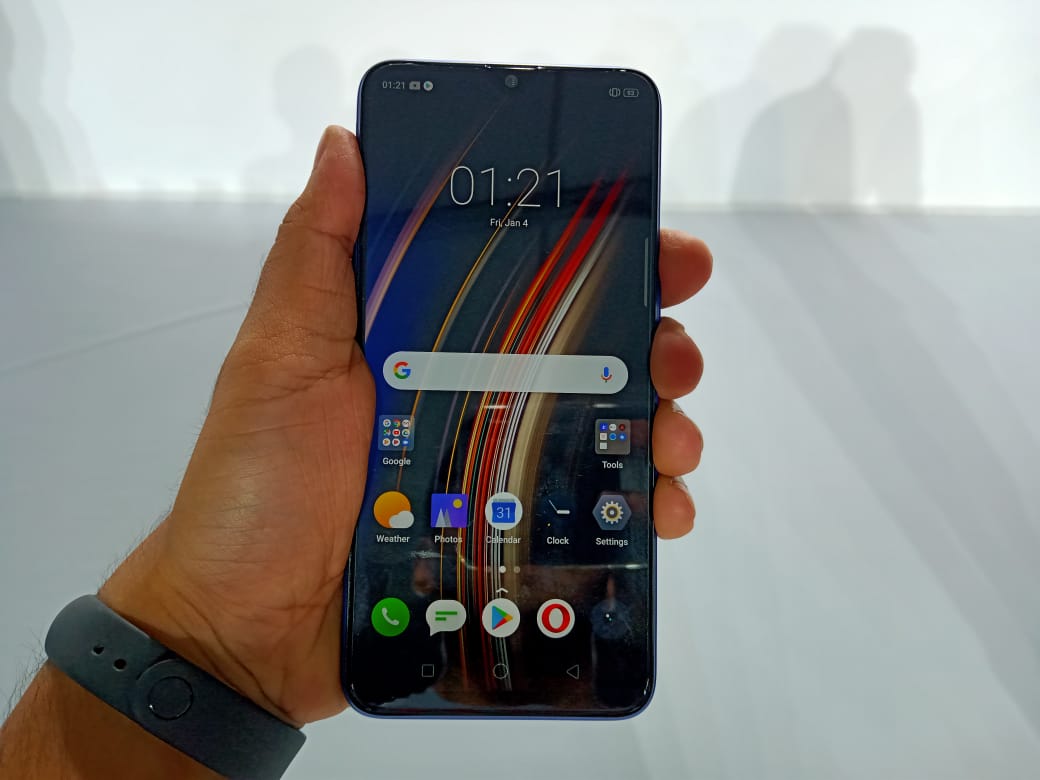 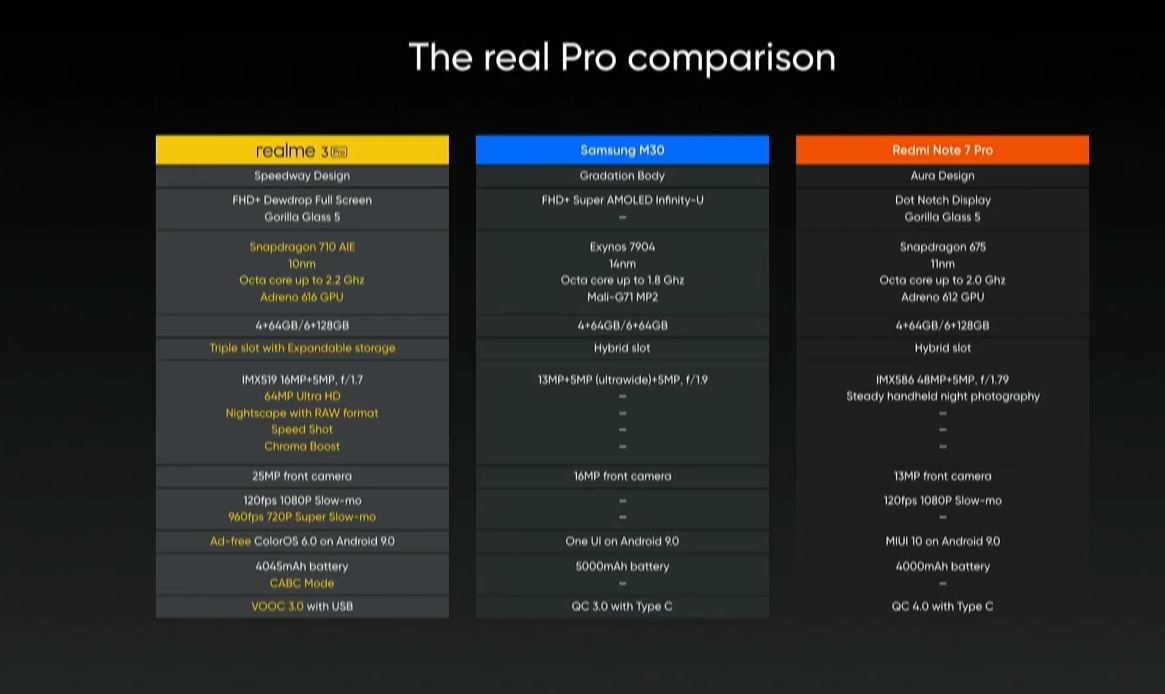 Looking at the first impression of the Realme 3 Pro, we see the enormous 6.3-inch display with the trending water-drop (Dew-drop) notch on top. Interestingly, since the display is slightly bigger than Realme 3 (6.2-inch), it appears like the bottom chin is slightly reduced. However, top-notch and bottom chin is the same as in Realme 3. The micro earpiece is perfectly embedded inside the border on the top. Honestly, looking at the front, one can’t tell if it’s the Pro version or the simple Realme 3.

Since it’s a budget-friendly flagship, the built material isn’t metal or glass but polycarbonate instead. However, the finishing seems to be perfectly fine despite the price tag. There are other downsides as well such as the thickness and the use of Micro-USB port. If you are looking for the Snapdragon 710 flagship with the best builts try checking out Vivo X27.

Despite the limited budget, Realme manages to use the popular Oblique gradient color. The rear color effect is enhanced by the S-curved gradient color. If you look closely, you will find the Speedway pattern all over the back, except the right side. The Realme 3 only had a two-color gradient design with no pattern. Realme 3 Pro is definitely an upgrade in terms of incredible visual experience with a dual reflecting-light pattern.

In comparison to the previous generations, the phone is more compact, the 3D curve sides on the rear are more compact for a better holding experience. 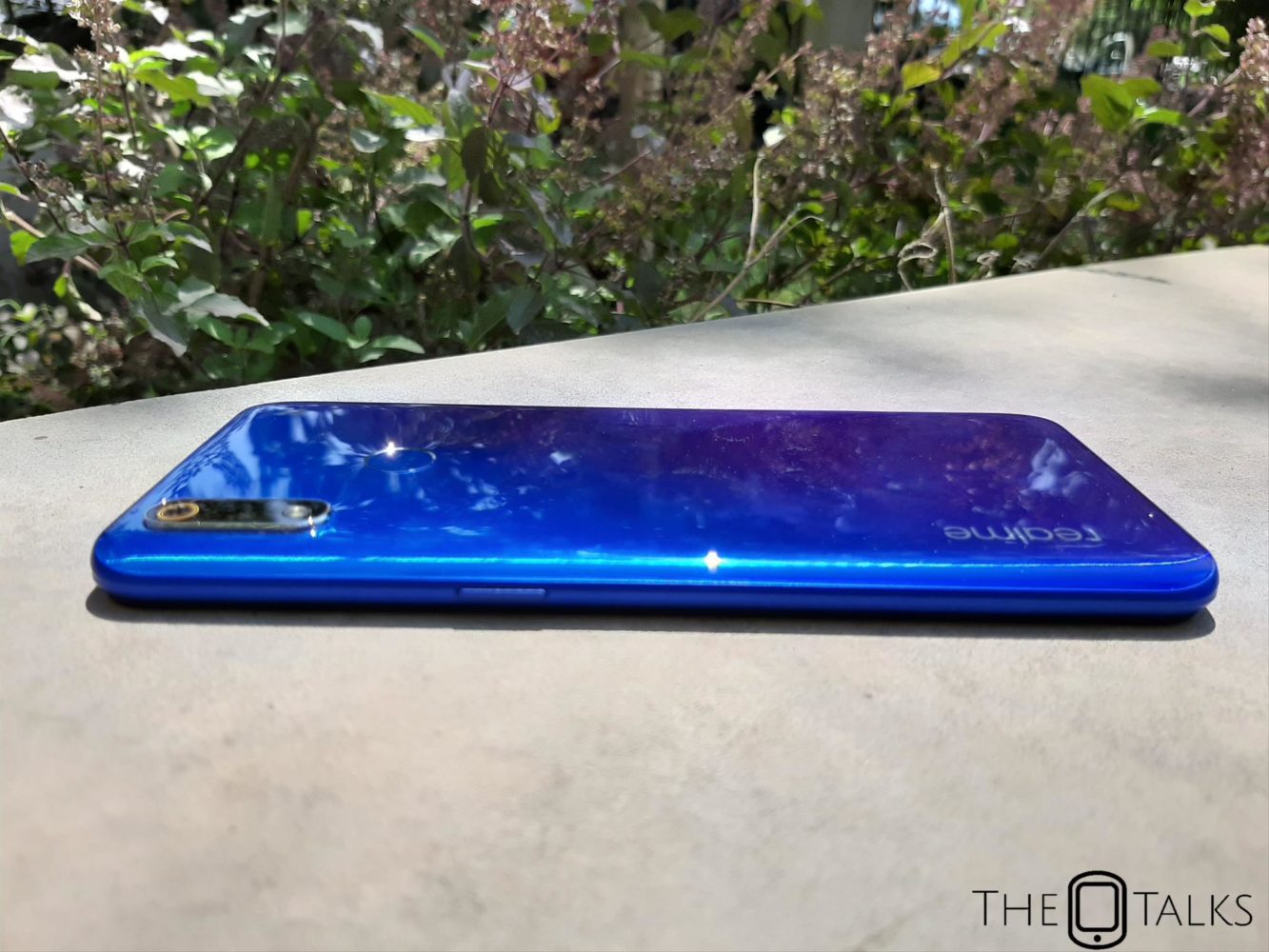 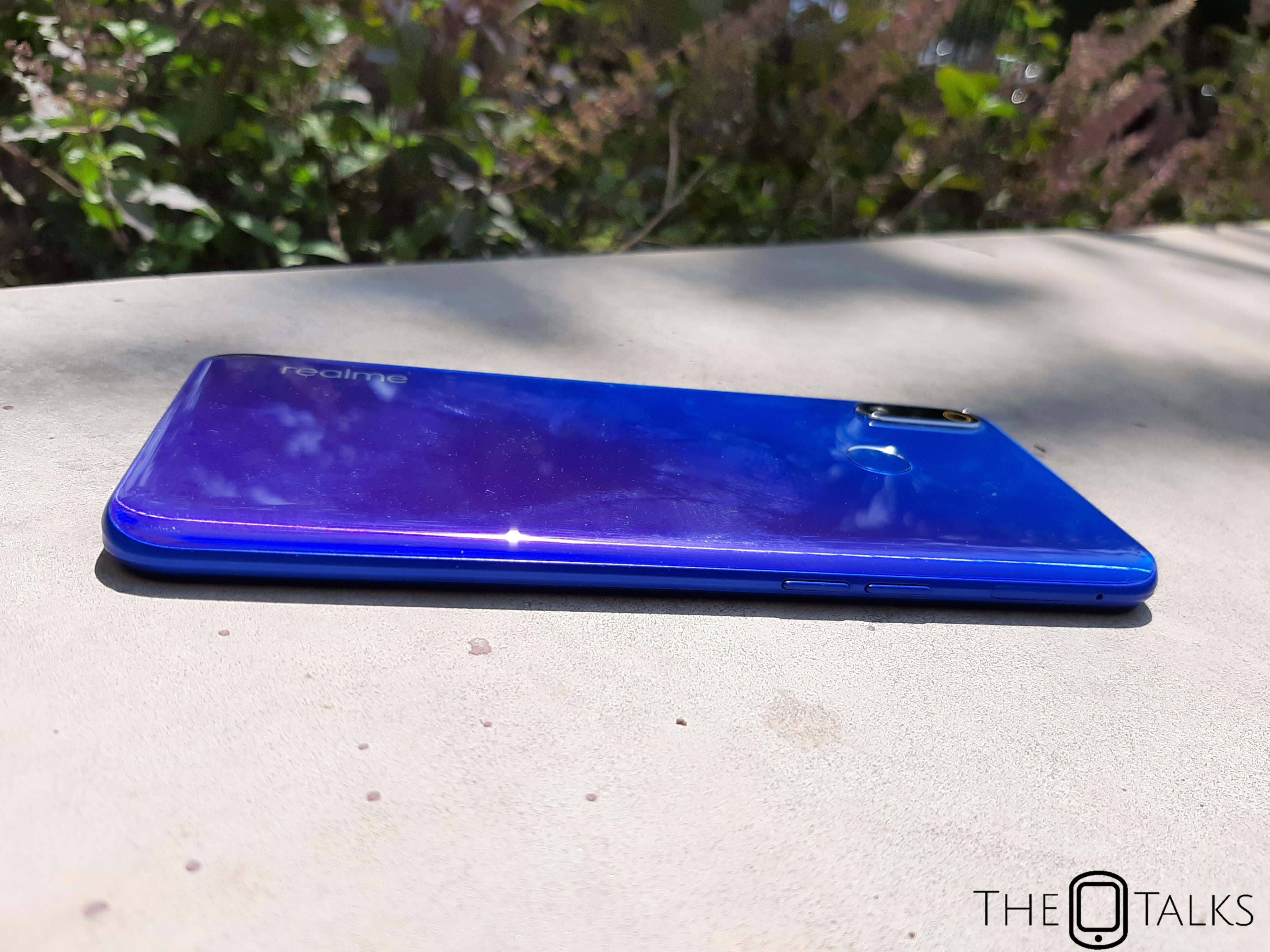 The phone is available in three colors: Nitro Blue, Lightning Purple, and Carbon Grey. Obviously, we have the nitro blue in this Realme 3 Pro review. It should be noted that the dual reflection is only in blue and purple colored variants, not the carbon grey which is simply plain.

For better ports management, every port has been provided on the bottom including the 3.5mm audio jack, Micro-USB port,  speaker opening, and microphone.

The rear camera placement is the same as in Realme 3. However, this time, the primary camera has a circle layout surrounding it, inspired by Mi 9. The camera section appears to be bulging out of the main chassis. I hope the lens glass has an anti-scratch coating. Well, only time can tell. Furthermore, the fingerprint reader placement is also the same which is at the top center.

Realme especially highlights the durability of the phone. This includes the Corning Gorilla Glass Protection 5 and the splash-proof and dust-proof claim by the manufacturer. Even if there’s no cooling system in the budget-friendly, the phone remains cool thanks to the 10nm SoC and metal and graphite conducting strips. The temperature is uniformly distributed throughout the phone. 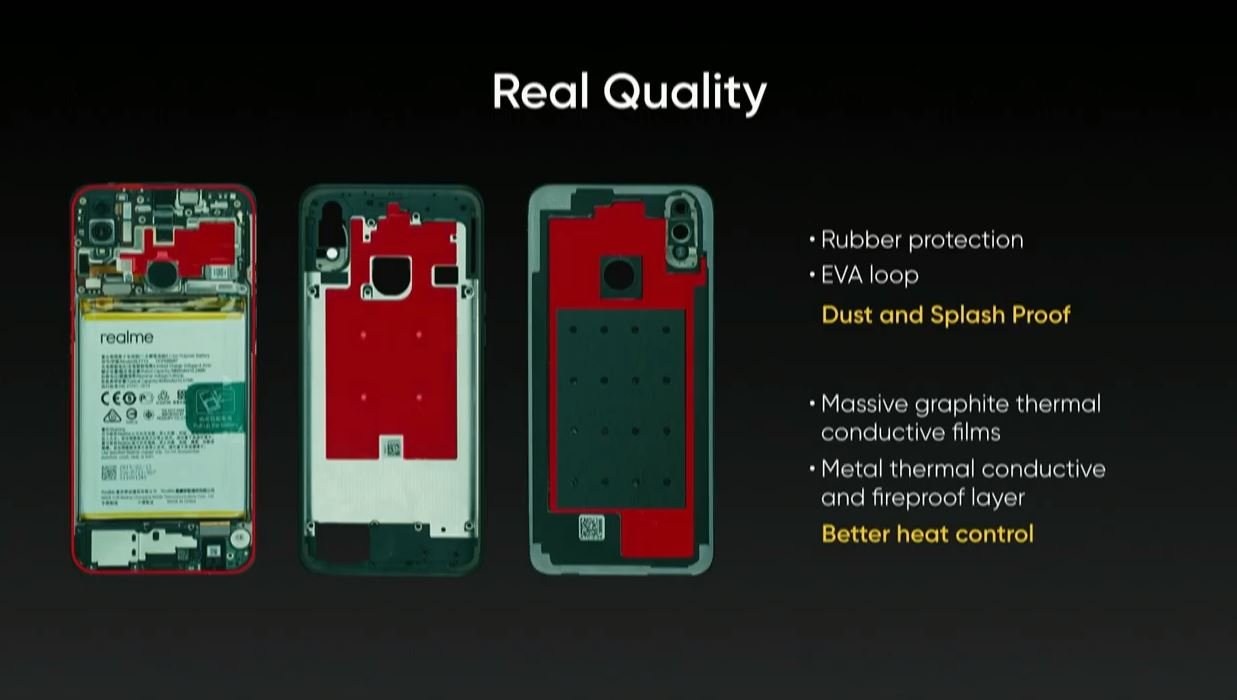 In short, Realme might not be as good as Vivo X27 when it comes to built quality, however, under a limited budget, it still provides great durability, refreshing gradient color design, and a huge display with thin borders.

On the front, we have the large 6.3-inch LCD IPS display with a Full-HD+ resolution. Now, the screen is neither one of the cons or pros of the flagship. It’s certainly an upgrade from the non-Pro version which was criticized a lot by the users because of the HD+ display. That is why Realme didn’t mention or praised it that much. We might miss the AMOLED display, but come on, even other budget-friendly flagships such as Redmi Note7 Pro and Vivo V15 Pro doesn’t have an AMOLED display, apart from Samsung’s own M30. 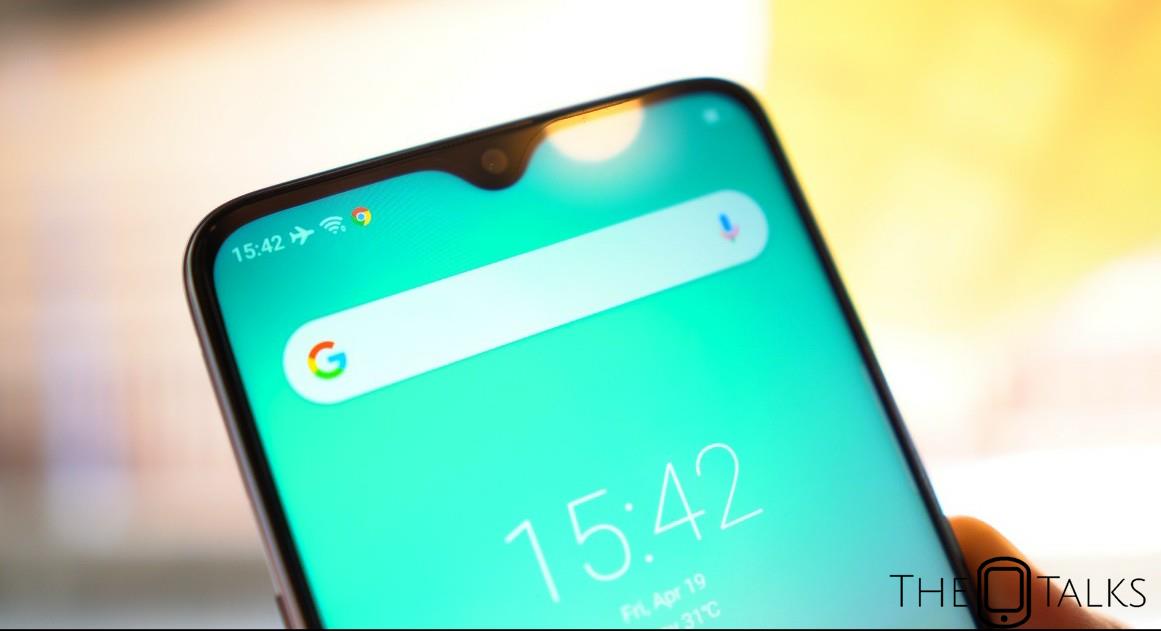 However, we do get the Gorilla Glass 5 coating and top-notch design which adds a lot to its durability and style. Moreover, IPS panels have a great viewing angle and are much cheaper the AMOLED ones which are an important point for the audience which buys budget-friendly phones.

Thanks to the thin borders, the viewing experience is incredible. Moreover, OPPO ColorOS 6 optimization and theme also adds fun to the screen with some bright wallpaper and theme.

Summing up the screen and display section, there’s nothing here to brag about, apart from the huge display size with Full-HD+ under the Rs 15,000 price tag.

Now comes the greatest highlight of this flagship of this Realme 3 Pro review. Realme 3 Pro features the upper mid-end Snapdragon 710 from the Qualcomm 7-series.

About Snapdragon 710, it has a 10nm process, Kryo 300 series CPU, Adreno 600 series GPU. In addition, there are multiple IPs including Spectra 250 ISP, Hexagon 685 DPS, and X15 LTE baseband, all derived from the 800 series flagship processor.

The Snapdragon 710 is also equipped with the Kryo 360 core with the same architecture as the Snapdragon 845. Its CPU core architecture is completely ahead of the SD 835 generation. The two Kryo 360 are up to 2.2GHz. Meanwhile, the six Kryo 360 small cores can guarantee all day usage with power efficiency.

The new Adreno 616 graphics processor is the second 6-series Adreno GPU after the Adreno 630 of the Snapdragon 845. Compared to the SD 660, the Snapdragon 710 GPU graphics rendering speed is increased by 35% and power consumption is reduced by 20%.

Let us ask you a question. How many smartphones have you seen featuring SD 710 under the Rs.15,000 INR price tag? None. Realme 3 Pro is the cheapest and only phone to run on Snapdragon 710 under the Rs.15,000 INR price tag. SD 710 is out there for two years now yet I haven’t seen a cheap smartphone featuring it. Looks like we have one now. Maybe, it’s cheaper now because of the fact that SD 710 is two years old now or another fact that SD 675 delivers better CPU performance than it.

Also Read: HiSilicon Kirin 710 Vs Qualcomm Snapdragon 710 – Does The Difference in Process Matters? 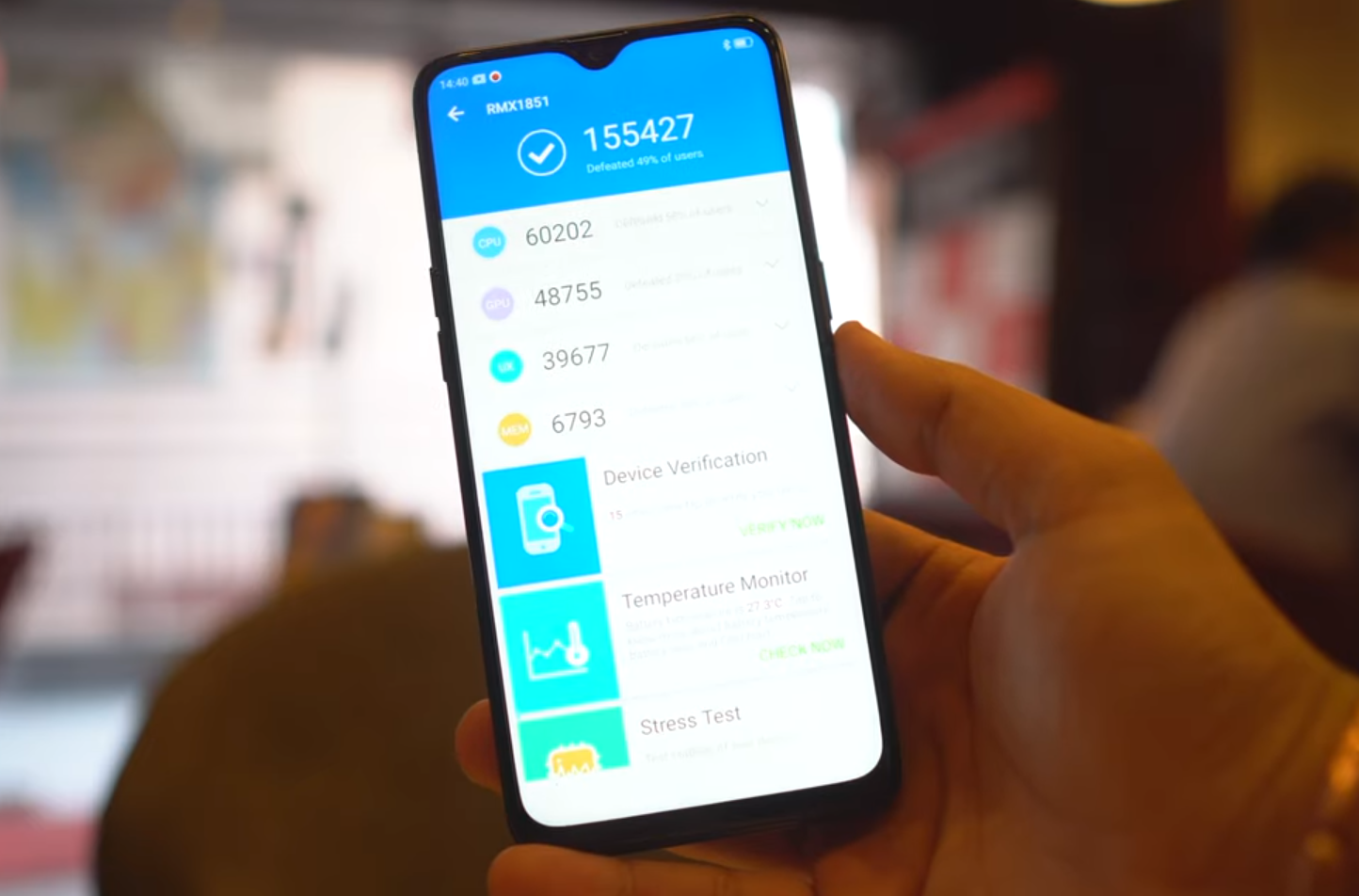 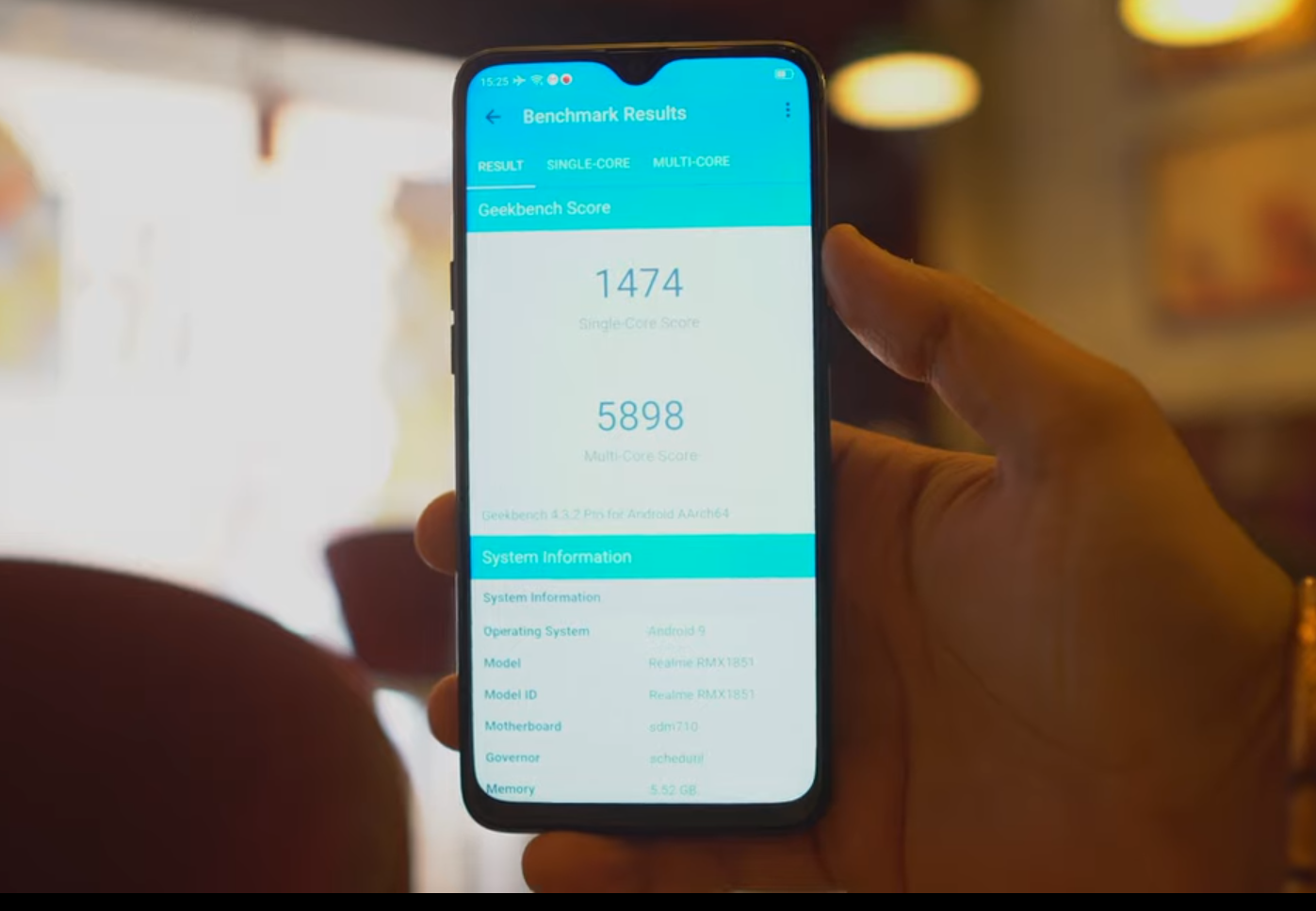 To be honest, I expected Realme 3 Pro to have better benchmark result because of SD 710, but practically, that’s not the case. At least the benchmark confirms so. However, one can’t deny the fact SD 710 GPU is faster than SD 675 GPU, so we might expect better gaming performance in comparison to Redmi Note 7 Pro and Vivo V15 Pro. In terms of raw performance, RN7 Pro and Vivo V15 Pro are slightly better than Realme 3 Pro.

Camera & Samples
It’s never about how many MPs a camera has, but how good the camera optimized. Realme 3 Pro appears to have that sort of optimization with Spectra 250 ISP and RAW file support.

Another highlight of the Realme 3 Pro is the rear camera performance. The Pro version of Realme 3 features a dual camera configuration. The primary camera is a 16MP Sony IMX519 sensor with an aperture of f/1.7 and pixel size 1.22 um. Meanwhile, the secondary camera is 5MP with an f/2.4 aperture. Other features include dual-pixel focusing, Bokeh effect, Multi-Frame noise reduction, and AI scene recognition. Though the Redmi Note 7 Pro might have boasting 48MP + 5MP camera it doesn’t have the Spectra 250 ISP used in the Realme 3 Pro because of SD 710.

Configuration wise, Redmi Note 7 Pro may appear to have better camera performance but thanks to Spectra 250 ISP, large aperture, and RAW file support, the camera samples of Realme 3 Pro are much better than that of Redmi Note 7 Pro, especially the nightlight samples. The phone provides: 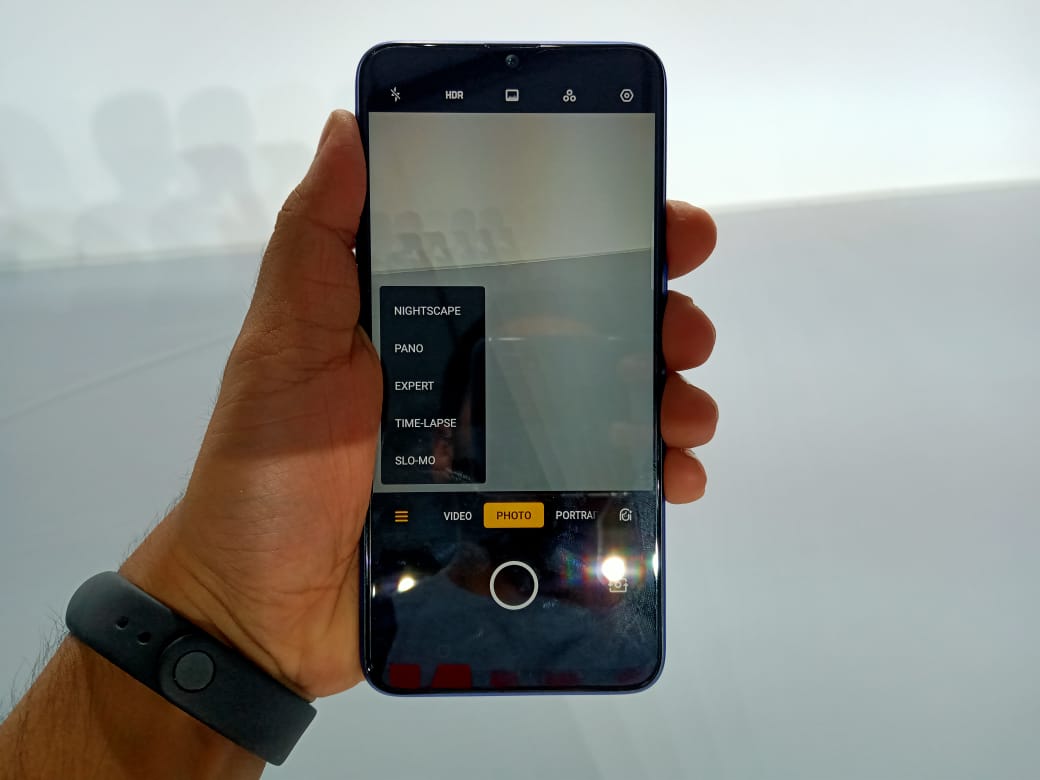 The ambient light appears to be sufficient, the details are incredible thanks to the secondary in-depth sensor. With the background blur, there’s a nice difference between the focused object and background. The edges of the object are sharp and not blurred when the background blur is applied. We do somehow miss the wide-angle, but I guess the good camera performance covers that.

The best thing about the daylight performance is the balance between brightness and color saturation giving it a natural view. If you like a slightly bright and high contrasted image, you can use the chrome boost as well. It ties with the Redmi Note 7 Pro daylight camera performance.

Is this where you might reconsider a budget-friendly smartphone which beats almost every mid-end smartphone on the market including Redmi Note 7 Pro, Samsung M30, and Vivo V15 Pro. Thanks to the RAW format and large aperture, the camera performs incredibly under low light. The noise reduction is minimum. The camera is able to distinctively recognize the dark part and the bright part. More importantly, it incredibly captures the illuminated source and doesn’t spread the light to the entire area. As a result, the entire picture is clearly recognizable. In comparison to the RN 7 Pro, M30 and V15 Pro, the image is more saturated in dark environment and easily distinctive. 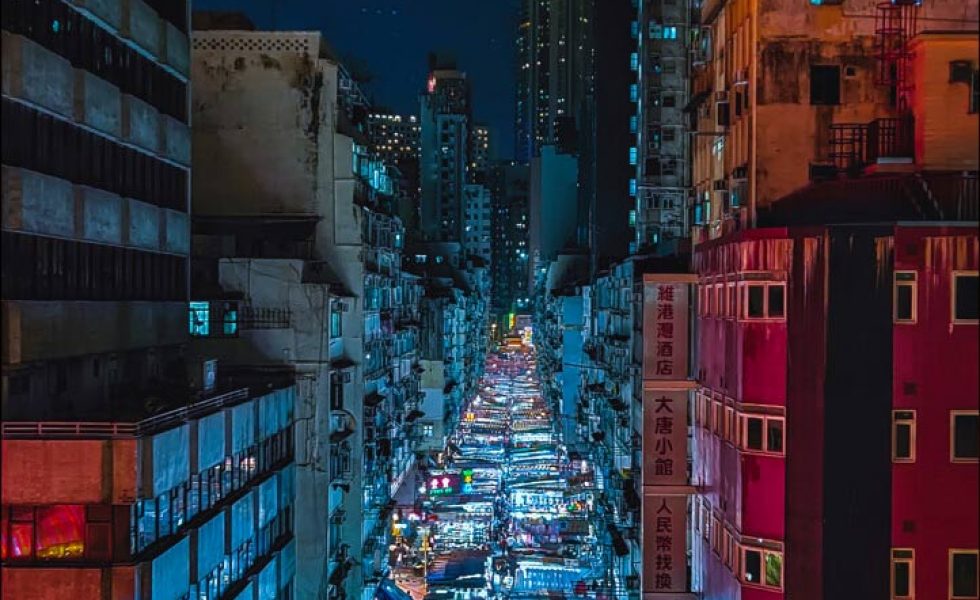 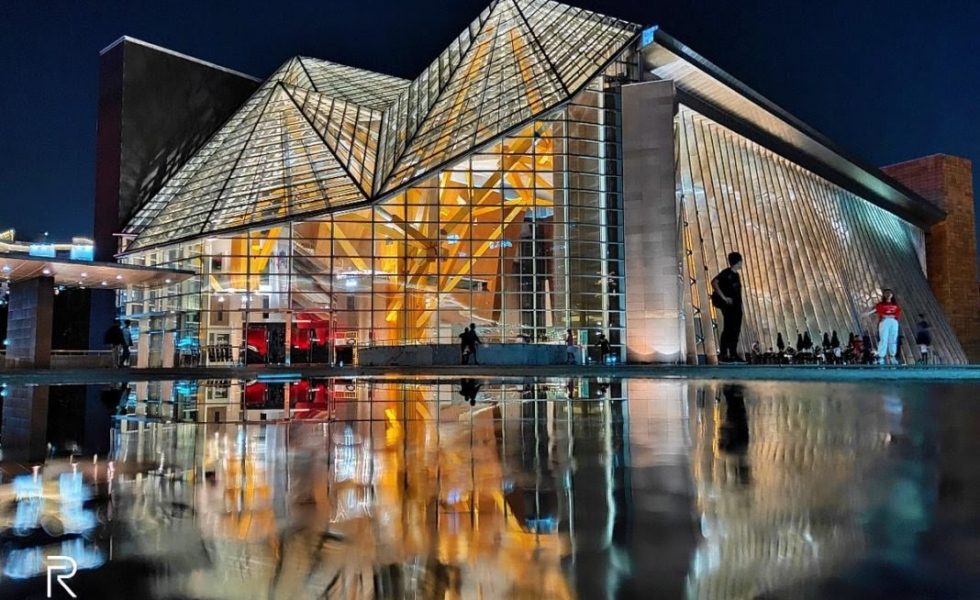 Realme 3 Pro features a massive 4045mAh battery. I don’t know why they said it as smart AI in the specs sheet. They are really over-hyping AI. Anyways, what do we get when we combine 4000mAh+ battery and 10nm SoC? We get: 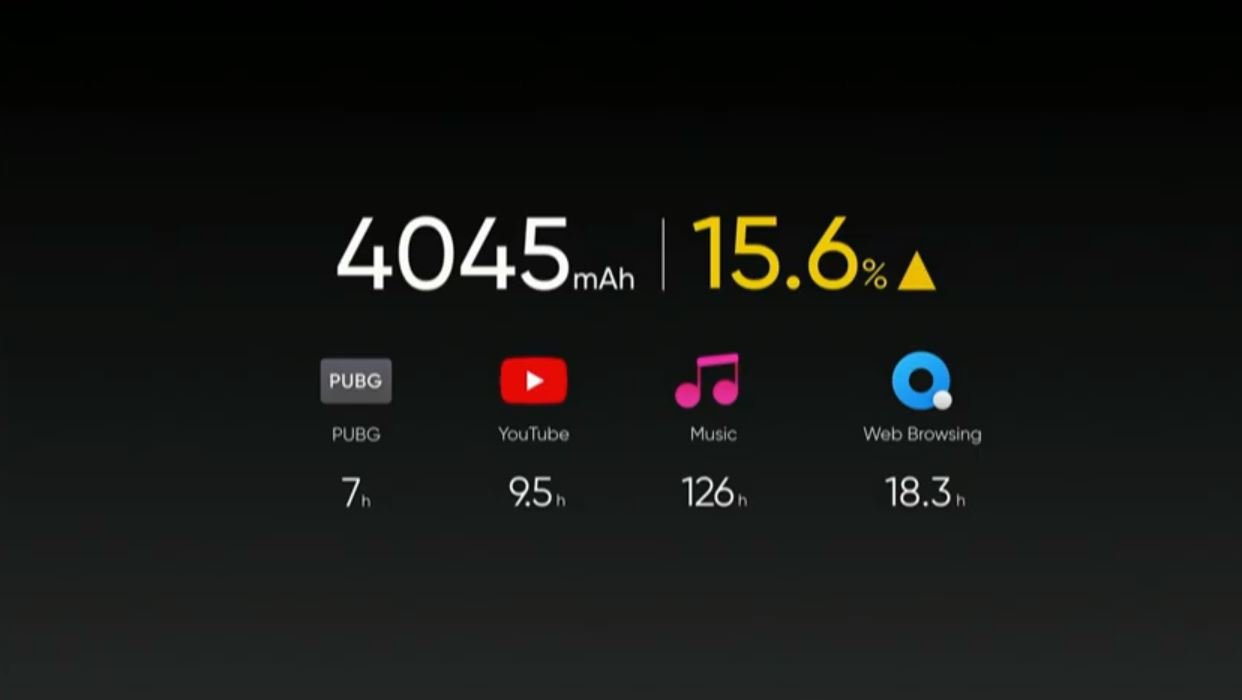 Moreover, there’s the CABC Mode which provides even better battery life by controlling the brightness. As I said, the phone is targeted for gaming users as well. That is why it supports fast charging and gaming at the same time. 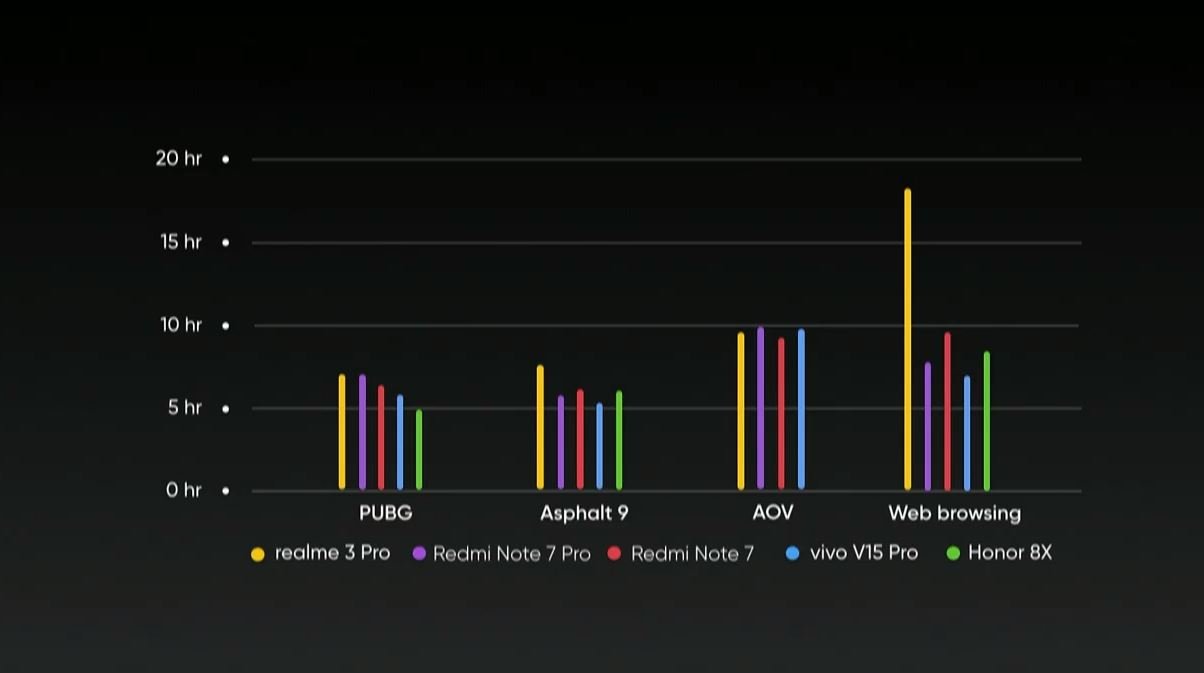 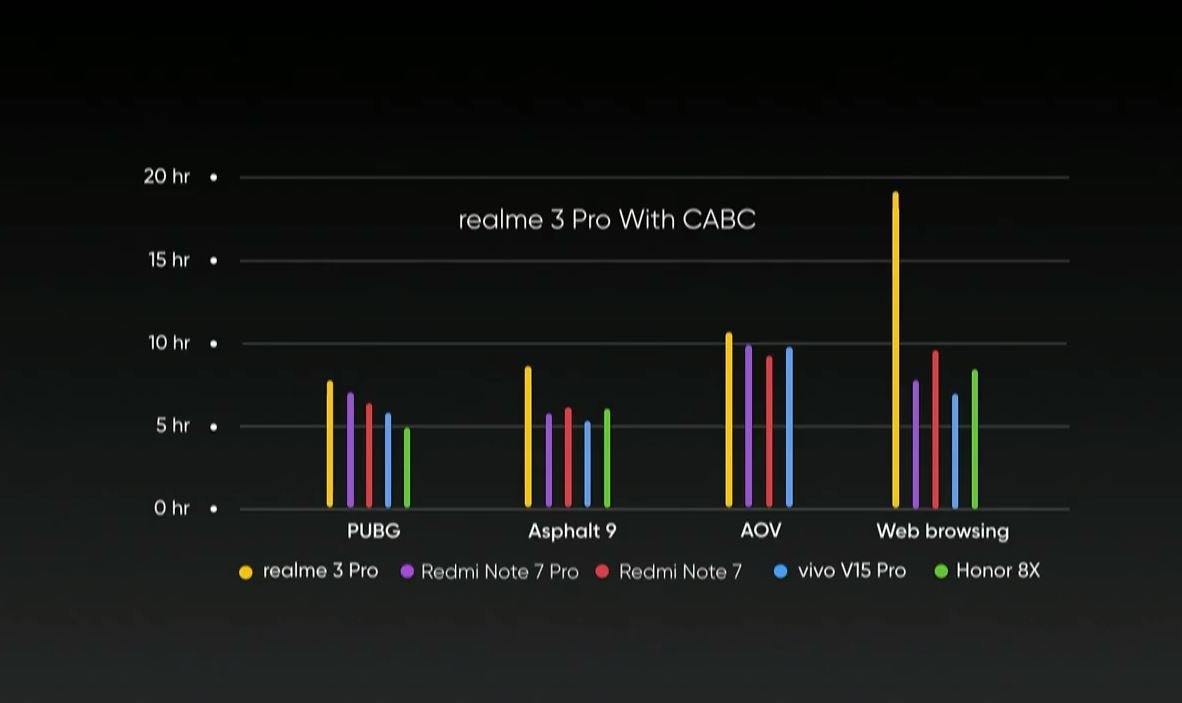 Realme 3 Pro despite having a massive battery, charges in 80 minutes from 0% to 100%. It comes with a 20W charger inside the box which is quite generous. Moreover, it supports QC 4.0+ fast charge as well. Whereas, Redmi Note 7 Pro takes 138 minutes to charge completely. 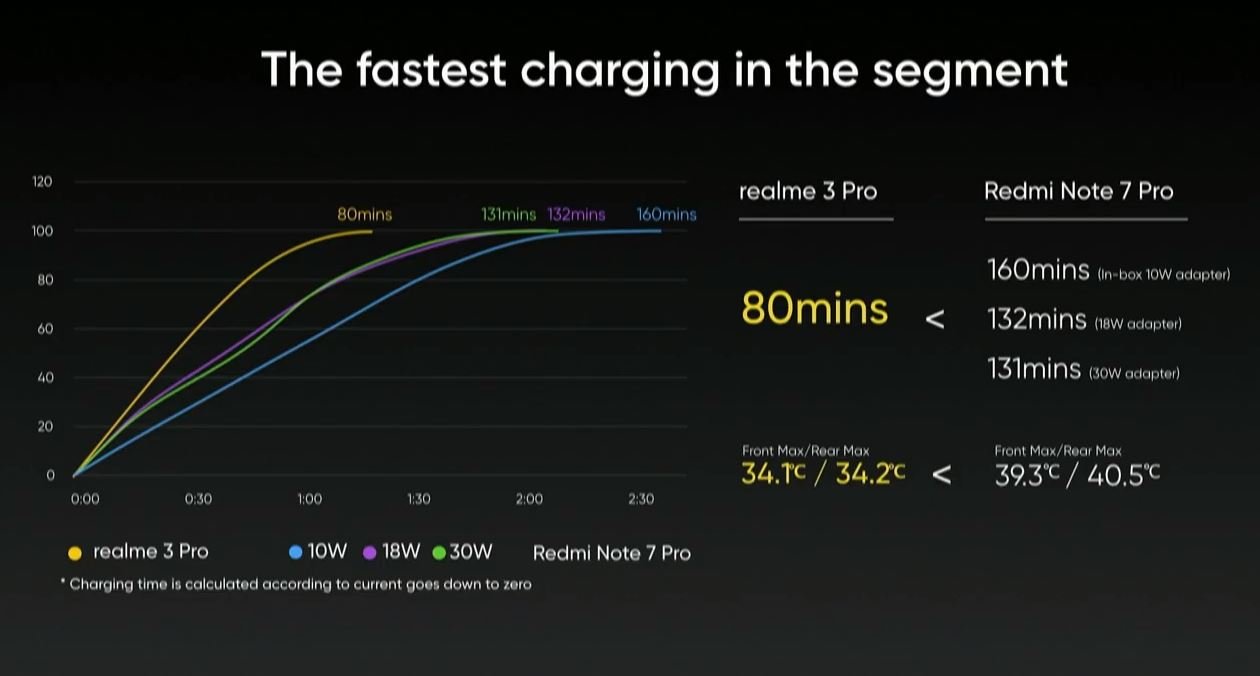 Since the targeted market in India where there are frequent voltage changes, the charger is adapted to the changes. It charges while the charger and the phone are surprisingly cool increasing the life of both. 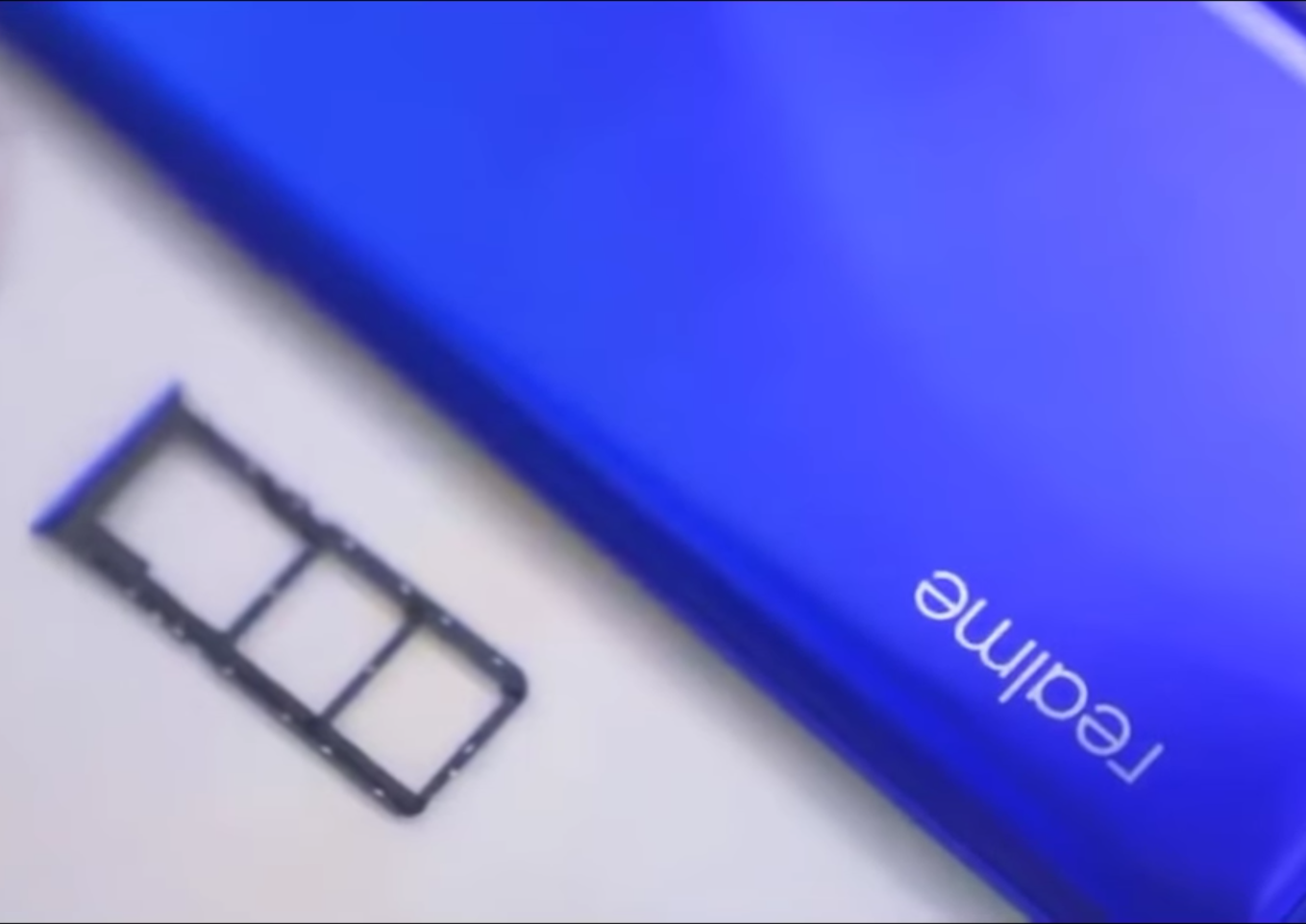 Realme 3 Pro runs on the latest ColorOS 6 based on Android 9.0. 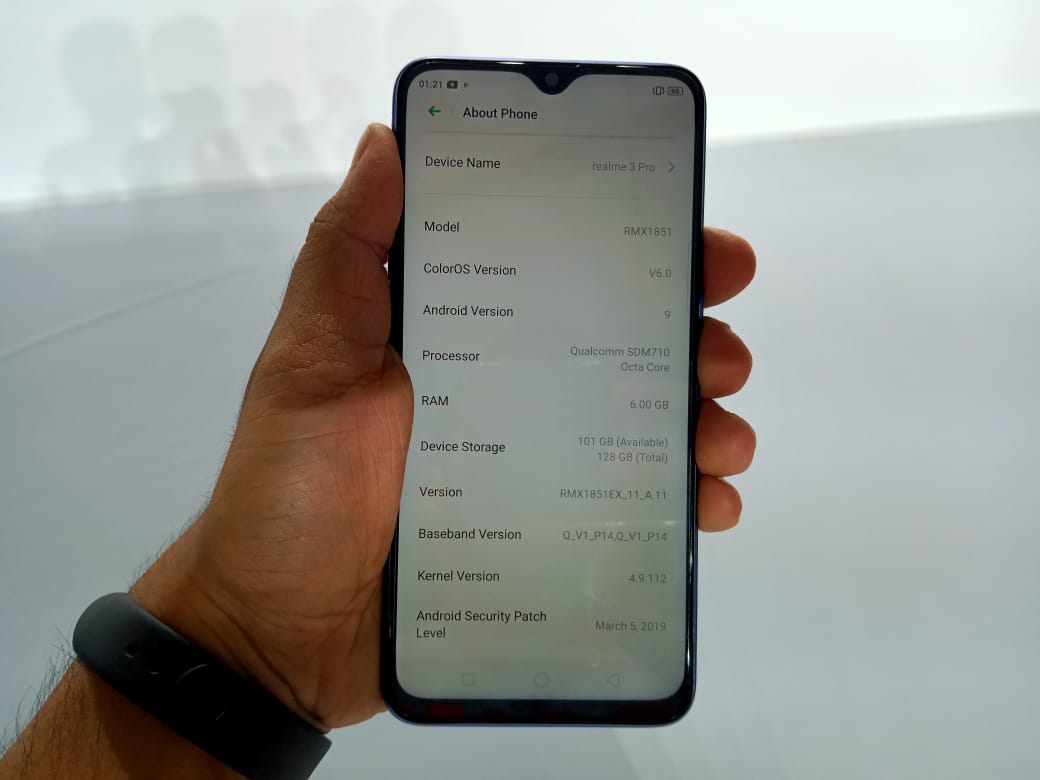 You might love Realme 3 Pro if you are into gaming

It adds speed optimizations such as AppBoost, FrameBoost, GameBoost to increase performance. The OS has special tweaks for gaming or PUBG Mobile to be specific. It improves character speed, aiming speed in games. Moreover, there’s the new minimal icon design and vibrant themes. Assistant Breno, Parental Control, and super visual effects have been added as well.

Realme listens to the demands of Indian users and covers them brilliantly!

The phone is specifically designed for the Indian users who demand triple slots, great performance, good battery life, and low price tag. Realme 3 Pro appears to be fulfilling all of these. Isn’t it?

Realme 3 Pro comes in two variants with price as follow: 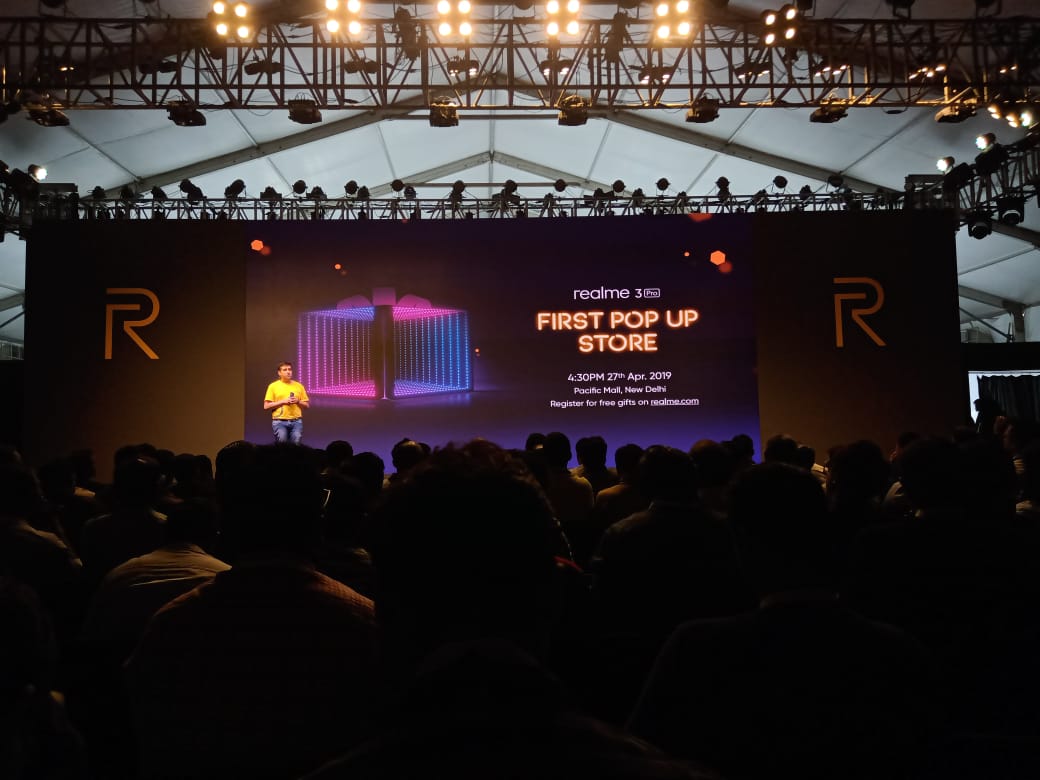 The phone will be available on Flipkart on April 27. Moreover, it will be the first Realme phone to be available offline on the first pop-up store in Pacific Mall, New Dehli, April 27 at 4:30 pm.  Since Realme is exclusive to India, the global availability isn’t an option.