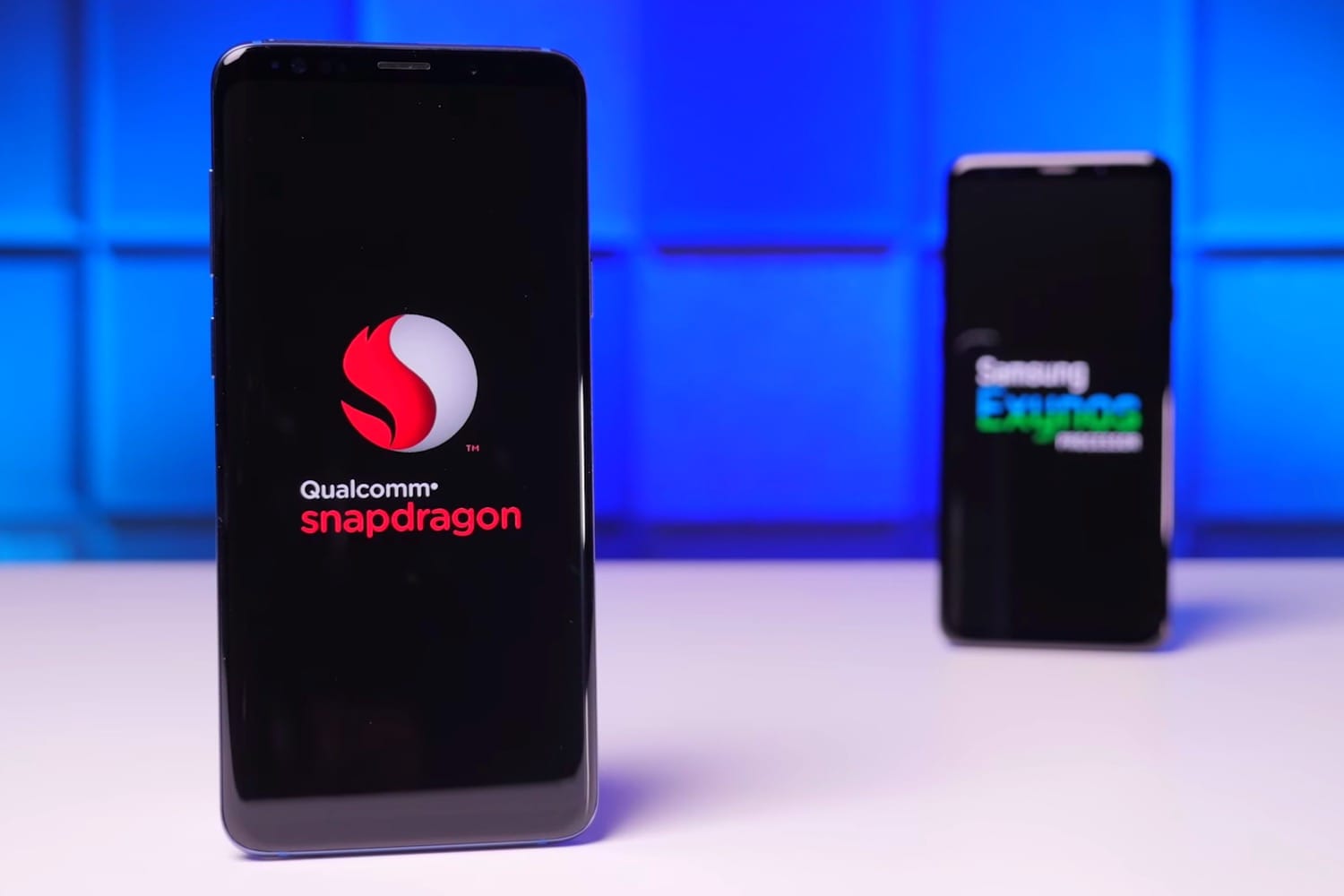 In short, the most important feature in any smartphone or smart device, in general, is the processor that is inside its body, since it is what makes them work the way they work and with the speed and efficiency with which they do it. Today we are going to make a comparison between some of the most popular processors that Qualcomm and Samsung have, and this is the strong and powerful war between Exynos 880 vs Snapdragon 675 vs SD 665. In this article, we will show some of the characteristics that these two processors provide, and we will tell you which the best choice is.

Also, in this new article, we are not only going to compare its specs in general, but we are also going to do a comparison of its AnTuTu Benchmarks.

Before talking about their specs, let’s talk a bit about when these processors were released. The Exynos 880 is the most recent, as it was only released on May 26 of this year. In second place we have the Snapdragon 675, which saw the light of the market two years ago on October 22, 2018 and, finally, being the “oldest” we have the Snapdragon 665, which was presented on April 9, 2018.

Starting the comparison from the most important aspect which is the manufacturing process, the Exynos 880 is based on an 8nm FinFET process, being not only the most updated, but it is also one of the most used in the current market. On the other hand, the two Qualcomm processors have an 11nm LPP FinFET (TSMC) process.

To be honest, using the 11nm process is completely fine in Q1 of 2020, however, other companies in the market might be ahead as it’s using 7nm, 8nm, 10nm, and 11nm process in not only their new series, but the new ones too. However, if the goal of Qualcomm is to provide better-priced gaming phones then 11nm won’t hurt anyone as long as we see a good price difference between all those gaming phones based on Qualcomm SoCs and the Samsung SoCs. If the goal is not the price, then the 11nm process might be quite old for the year 2020.

Starting with the CPU section, the Exynos 880 has a dual-cluster design (2 + 6) CPU, which consists of the following:

On the other hand, the Snapdragon 675 also has a dual-cluster design (2 + 6) CPU, which consists of the following:

Lastly, the Snapdragon 665 has also a dual-cluster design (2 + 6) CPU, which consists of the following:

The Snapdragon 665 comes in the last place because:

The Snapdragon 675 comes in the last place because:

The Exynos 880 comes at first place here because:

Inside of the GPU in the Exynos 880 there is an ARM Mali-G76 MP5, which promises “3D graphics with high frame rate in games”, APIs and various optimizations for on-screen graphics. It debuts an image signal processor that supports up to five individual sensors for cameras and can process three sensors. 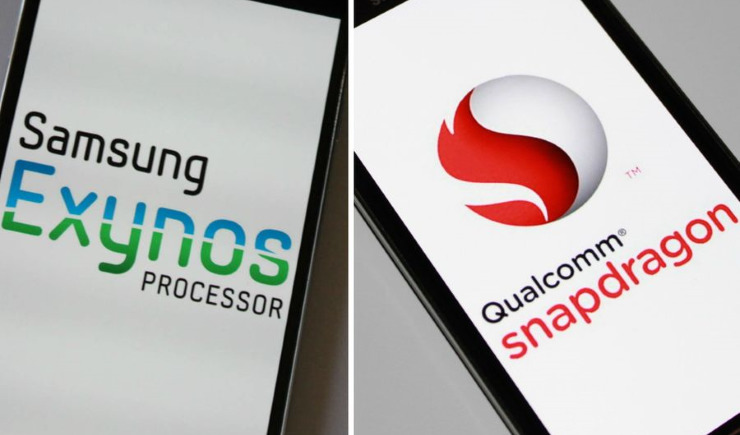 Now, we have the Snapdragon 675, which has downgraded GPU from Adreno 615 moving to Adreno 612 which features 14nm lithography, speed of 850MHz. However, Qualcomm assured that this processor performs considerably better than the Snapdragon 670 in real-world scenarios. Thanks to the built-in-game enhancements, for example, reduce “janks” or stutters by over 90 percent during gameplay. However, looking at the benchmark score, the performance is still behind SD 710 and SD 670 despite having a higher frequency but an old process. This is the only downside of this SoC if we compare it to SD 670.

Lastly we have the Snapdragon 660 that uses Adreno 512, this being the most powerful GPU in the Adreno 5xx series. 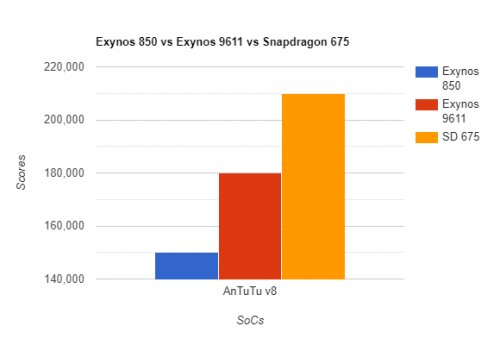 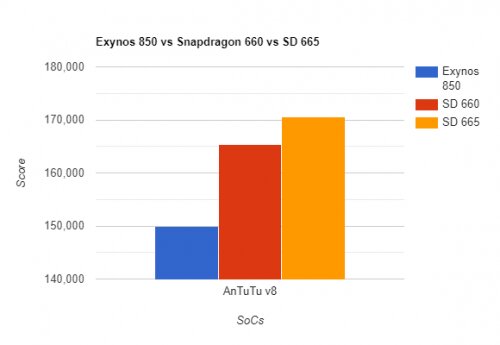 Relating to this category, inside the Exynos 880 are a built-in NPU and DSP for in-device AI processing and both share a driver and DMA (direct memory access) for faster and more efficient performance.

On the other hand, the Snapdragon 675 has Hexagon 685 as the DSP which enables AI-camera, AI-monitoring, AI battery management, and more AI-based featured. Also, it scores around 9,443 points on AI-benchmark almost 2x of Exynos 9611 AI.

Last but not least we have the Snapdragon 665. This processor was launched in 2019, so it has a small update in this section with the Hexagon 686 DSP engine, which is an updated version of the Hexagon 685. It has a Hexagon Vector eXtensions (HVX) for images and advanced computing. On AI Benchmark, it scores around 6,722 points.

The connectivity features of the Exynos 880 include an integrated 5G modem that supports download speeds of up to 2.55Gbps and upload speeds of up to 1.28Gbps on NR 5G sub-6GHz networks. The chipset’s dual E-UTRA-NR connectivity combines LTE 5G and 4G networks to deliver a download speed of up to 3.55Gbps and an upload speed of up to 1.38Gbps. It appears to be the same modem used in the Exynos 980. Other features of the Exynos 880 SoC include dual-band Wifi b/g/n/ac, Bluetooth 5.0, FM radio, GPS, GLONASS, BeiDou, Galileo, and USB Type-C port.

Now talking about some other specifications of these three processors, the Exynos 880’s advanced image signal processor supports up to five individual sensors and can process three sensors at once, while allowing a maximum resolution of a single 64 megapixel camera and a 20 megapixel dual camera rating for each camera. As for video, the Exynos 880 multi-format codec supports 4K video recording and playback at 30fps (frames per second). A chipset that has already entered mass production and will debut with the Y70s. 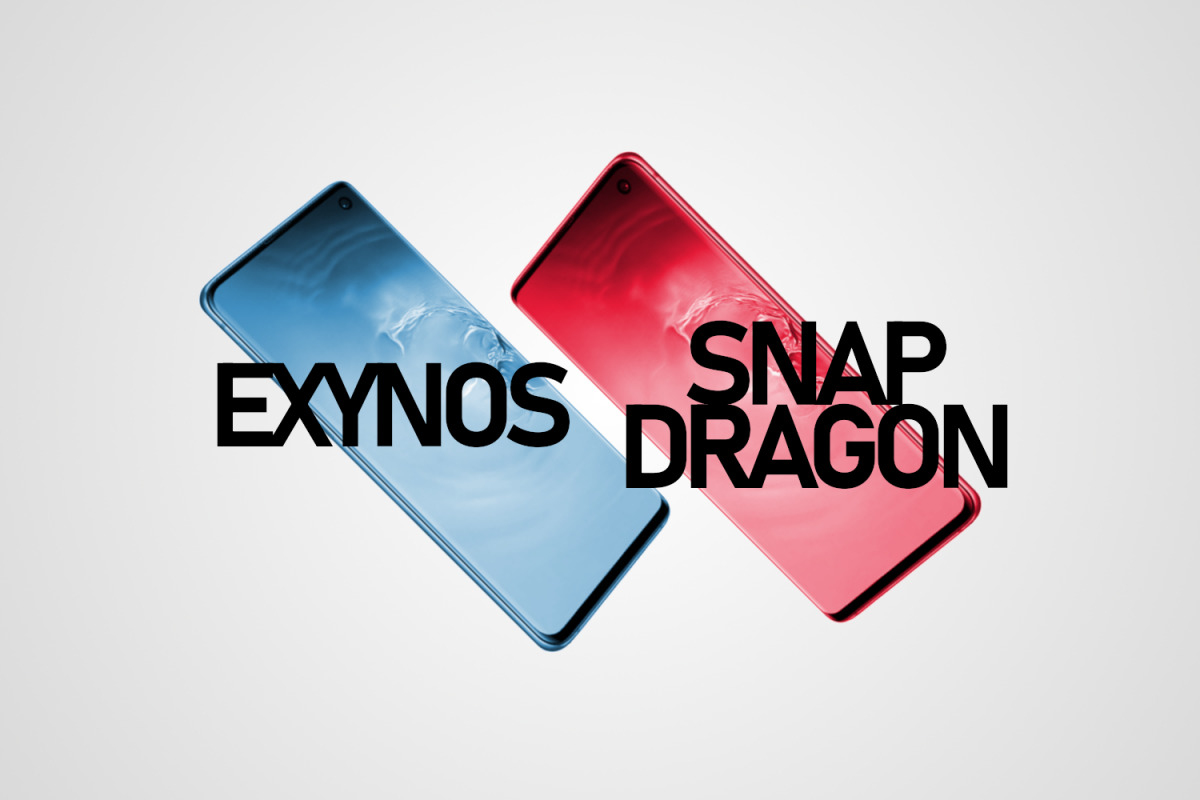 Snapdragon 675 has Spectra 250L processor as ISP. This is compatible with dual 16 megapixel cameras, a single 25 megapixel camera, and support for the single 48 megapixel camera sensor with the use of MFNR. It can also support the 192 megapixel single camera sensor. There are other enhanced options as well such as triple-camera support for capturing super-wide images or up to 5x optical zoom, portrait mode, and breakthrough limitless HD slo-mo recording – at up to a dazzling 480fps (frames per second).

The Snapdragon 665, which has an ISP Spectra 165 equally of 14 bits 2x. It supports up to 16 megapixel and 25 megapixel dual cameras in a single camera. Qualcomm has also added the unique 48 megapixel camera sensor with the use of MFNR.

Finally, to see what is the best option among these processors at the budget level, we have to know the price of the phones they are on. In this category, the Snapdragon 665 gets the first place, and that’s because it’s the cheapest of them all, that will be present in the Vivo Y50 that has a price of only $250.

Coming in second place we have the Snapdragon 675, which is present in the phones like TCL 10 Pro and Vivo V17 Pro that are available in the market with a price of around $290 to $390. There are used phones as well which can go as low as $150.

Finally, and being in third place in this category, we have the Exynos 880, which is rumored to cost only about $310.

In this Exynos 880 vs Snapdragon 675 vs SD 665 comparison, our pick is the Exynos 880. Why? Because it provides the best CPU and GPU performance, is the one with the latest process, and 5G networking.

I will choose Snapdragon 675 if:

I will choose Snapdragon 665 if:

We hoped that you loved this Exynos 880 vs Snapdragon 675 vs SD 665 comparison. Which one is your favorite SoC? Let us know in the comments.

Exynos 880 vs Snapdragon 675 vs SD 665 | AnTuTu, Specs
Summary
In this Exynos 880 vs Snapdragon 675 vs SD 665 comparison, our pick is the Exynos 880. Why? Because it provides the best CPU and GPU performance, is the one with the latest process, and 5G networking.
Reader Rating0 Votes
0
9
Total Rating
Start typing to see results or hit ESC to close
Xiaomi Huawei comparison OnePlus Redmi
See all results